Ah, L’amour. That glowing neon red scrawl, the love symbol that, as surely as a signature, tells you ‘Baz Luhrmann was here’.

It featured prominently in the movie Moulin Rouge (hence the promotional team for the stage musical version installing it in the foyer of Melbourne’s Regent Theatre this week). It had a blink-and-you’d-miss it appearance in Romeo + Juliet, as the Montagues hopped in their car and headed to a fateful party. 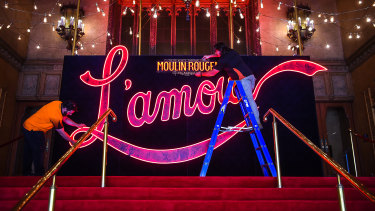 Nelson Pollard (left) and Matt Spargo install a recreation of Baz Luhrmann’s glowing red L’amour sign at the Regent to celebrate the return of theatre to Melbourne. Credit:Justin McManus

It dominated the set, glowing heart-red as two lovers fell for each other in the acclaimed production of opera La Boheme that Luhrmann first staged at Sydney Opera House in 1990, aged just 27. And it was, in utero, the huge Coca-Cola ad on the roof where the lovers in his breakout hit Strictly Ballroom practised their secret dance.

For the first time, Luhrmann and his wife and long-time collaborator Catherine Martin have told the full story of this symbol, which Martin calls their “talisman”, and Luhrmann says is part of their “aesthetic DNA”.

“We were only kids,” Luhrmann says, when he, Martin and design assistant Bill Marron spent their small research fee for Boheme on a trip to Paris, where Martin’s deceased uncle had left a lovely apartment with a view over Parisian rooftops.

They were dreaming up the staging for perhaps the most romantic moment in all opera, the heart-bursting duet O soave fanciulla, when young Bohemians Rodolfo and Mimi declare their feelings and leave together with “l’amour, l’amour” – love, love – fading offstage. 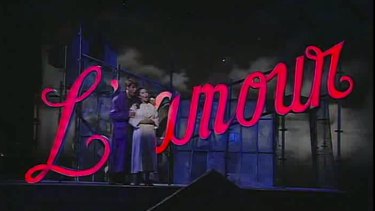 “You can never be in Paris and not be struck by the rooftops,” says Luhrmann. “So I was looking for a way to find Mimi and Rodolfo out on the rooftop. [And] the other thing in photographing Paris pretty obsessively at the time was also just the ageing signage.

“So at some point [Martin] and I thought, wouldn’t it be good if they could come out onto the roof and find themselves amidst a sign.”

Martin recalls they “wanted something emblematic that made the rooftop life of Paris feel contemporary… Baz’s idea was to incorporate some kind of electrical signage that was absolutely a product of the 20th century. It then became a kind of a talisman for us, and this idea of love”.

As to what the sign should say? “It’s La Boheme, so it’s pretty self-explanatory,” says Luhrmann. 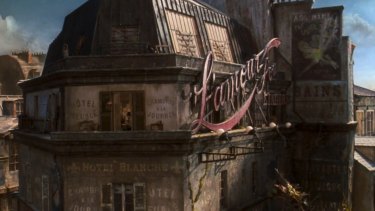 Well, the pair were also working on Strictly, a group-devised piece from Luhrmann’s time as a student at the National Institute of Dramatic Art in Sydney. He and Martin were reimagining it as a movie and were, Luhrmann says looking for a staging to get the lovers outside.

“If you look at the L’amour [sign], it has a Coca-Cola influence to the graphic, so it’s a bit of a nod to that.” 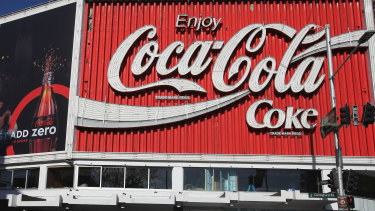 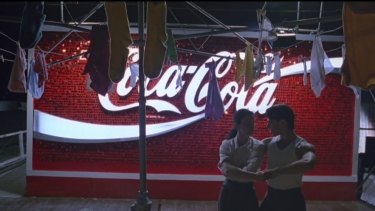 It became much more to them than just a set dressing. Luhrmann and Martin were married in 1997 and held the reception at the Sydney Opera House, where they built a church on stage with the L’amour sign at the back of the church.

As for its appearances in Romeo + Juliet and Moulin Rouge… well for the latter, a story of Bohemians in Paris, it made logical sense to tie it to the original Boheme design (with a twist: the sign says ‘L’amour fou’, or ‘love is mad’).

And the former (a Shakespearean ‘Wherefore L’amour’)? “This idea of commercial signage [became] a talisman for us,” says Martin.

Luhrmann says it’s a wink to their earlier work, a kind of Easter egg. But, more than that, “[Martin] and I both share this kind of romance about old neon signs, and signs in general. 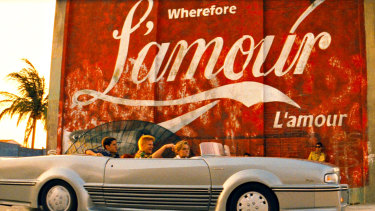 “Of course, signs are a very basic device for giving information to audiences, for example Fire Escape This Way… but I think even back when I saw Francis Ford Coppola’s [1982 movie musical] One From the Heart, he used the neon graveyard in Vegas to great effect, so I think it’s just been in our aesthetic DNA.”

Luhrmann is in the final weeks of shooting his Elvis Presley movie (starring Tom Hanks as Presley’s manager Colonel Tom Parker). He doesn’t say if L’amour gets a cameo. If not it is, perhaps, because he feels he’s moved on.

“The guy who made Moulin Rouge 20 years ago is not the person I am today,” he says. “My focus is moving on and finding works that express who I am now.” 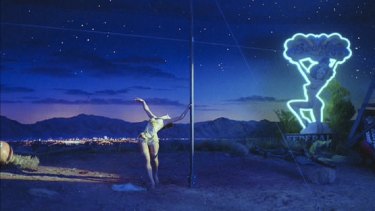 A scene from Francis Ford Coppola’s 1982 musical One From the Heart.

But he’s excited about the Rouge musical coming to Australia.

“The idea of younger people taking the works I have done and finding a new language for them is really exciting. Its premiere in Australia [is] a symbol of how we can create things in Australia, they can go out into the world and then come back here. It’s closing the circle.”