“Did you grow up supporting the Australian cricket team?” asks Usman Khawaja, before nodding his head in understanding when I, a fellow Pakistani-born Australian, admitted that I didn’t.

“Neither did I,” the 36-year-old says. “I didn’t support Australia for a long time, up until I was 13 or 14. I just could not relate to the Australian cricket team.” 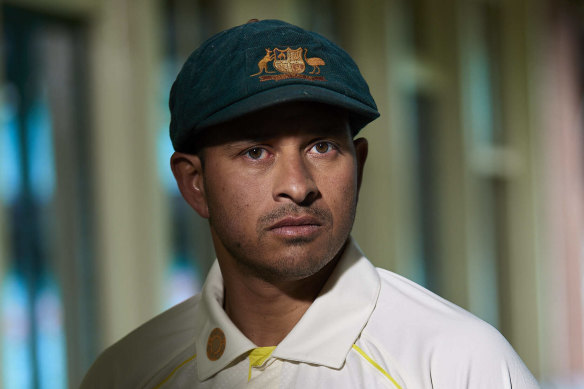 It’s an extraordinary thing to hear from Australia’s opening batter who has played more than 100 international matches for the country, including 56 Tests, has a higher average than legends of the game like Adam Gilchrist, David Warner, Justin Langer, Michael Slater, Ian Chappell and Mark Waugh, and – just a few days before our interview – scored a career high of 195 runs against South Africa at the Sydney Cricket Ground, inspiring chants of “King Uzzy”.

But, as shocking as it might be for some Australians to hear a member of one of the nation’s most venerated institutions – the men’s Test cricket team – admit to struggling to identify with it when he was younger, it’s actually deeply relatable for those of us from similar backgrounds.

It’s one of the sad ironies of cricket in Australia: Australians from South Asian backgrounds (from countries including India, Pakistan, Bangladesh and Sri Lanka) are one of the country’s largest migrant blocs and are cricket obsessed, yet often regard the team of their adopted country with indifference or even antipathy. Why?

“When I looked at the TV, I saw these really brash, really stubborn, beer-drinking white Australians that were the same kind of guys racially vilifying me while I was playing cricket,” Khawaja explains. “I was like, ‘Well, why would I support this team that doesn’t support me?’

“I found that really hard growing up, and I think that bit of resentment still sticks with a lot of young kids, particularly from ethnic backgrounds, that always get called names and racially vilified. ‘Curry muncher’ is the one that sticks out to me the most. I used to get called that all the time.”

The frustration Khawaja and others, including me, felt wasn’t with the individual cricketers who play for Australia. In fact, his father was a huge fan of Australian cricketers like Bill Lawry. I grew up being regaled with stories from my cricket loving mother about watching the Chappell brothers and Denniss Lillee when she was growing up in Pakistan. Instead, the tension was with white Australia itself and the way it marginalised and belittled those from diverse backgrounds. The national men’s cricket team were seen as avatars of that kind of culture, a view reinforced by how white the team has been throughout its history.

Nasser Hussain, the son of an Indian Muslim, played his first Test match for England in 1990, and was appointed captain in 1999. It took another 12 years before Australia appointed its first, and still only, Muslim player: Usman Khawaja. Only two Indigenous men have ever played Test cricket for Australia: Jason Gillespie and Scott Boland. More than 460 men have played Test cricket for Australia, just a touch under 99 percent of them have been white. 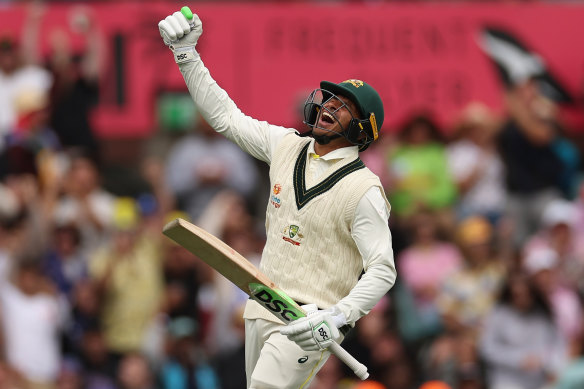 Earlier this month, Khawaja scored a career high of 195 runs against South Africa at the SCG.Credit:Getty Images

It’s an embarrassing record that helps explain why even now, nearly two decades after Khawaja started to shrug off his distaste of the Australian team, many younger Australians from South Asian backgrounds still can’t get behind the Baggy Green.

“I met three guys yesterday who said ‘Good luck in India [the location of the next Test series] Uzzy, we hope you kill it. But we’re still gonna support India’,” Khawaja tells me. “I started laughing. They were obviously kids of Indian background but I asked ‘Where were you born?’ and they said ‘Australia’.

“I was like, ‘Come on man! Support me, support Australia, what are you doing! I’m here, I’m representing you!’”

There’s a tinge of frustration to Khawaja’s tone when he tells this story. There were no Muslim or South Asian role models to look up to in Australia when he was growing up in the 1990s, he tells me, and he clearly wants the next generation to see him as someone carving a path forward to make space for more people like him. But, given he held the same views about the Australian team at their age he understands their reluctance to chant “Aussie, Aussie, Aussie”.

It’s an issue he’s raised with his teammates, too.

“Before the first Test against the West Indies [late last year] I did talk to the guys about how much we’re loved around Australia, from white Australia, but not necessarily from the rest of the population,” he says. “There’s still such a big subcontinental community that loves cricket that don’t support the Australian cricket team.”

As the first South Asian-born Australian Test cricket player, the easiest thing for Khawaja to do would be to keep his head down, share generic platitudes about how great Australia is and not rock the boat. But while he clearly loves Australia and playing cricket for the national team, he doesn’t believe in staying quiet about the country’s race problem – and how it impacts cricket. 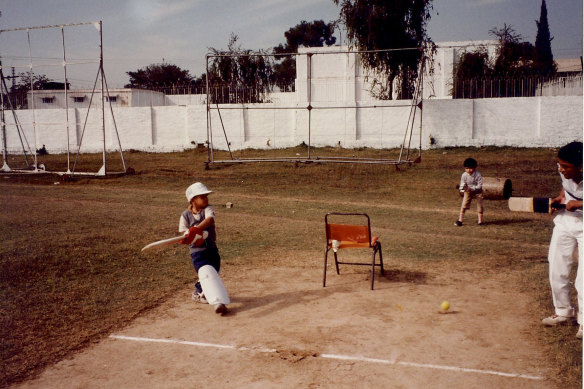 Usman Khawaja (left) as a small child playing in Pakistan, with a thigh pad covering a leg.

He has regularly shared stories of his experiences with security, who often don’t believe he’s a member of the Australian cricket team, even when he’s wearing his kit. At the most recent Test match at the SCG, where he scored his personal best of 195 runs, he tells me that security were eyeing him off, even when he was walking with the rest of the team – clearly unsure whether he belonged.

These stories, as depressing as they are, can be strangely vindicating for those who’ve experienced the same thing. If even an Australian Test batter is being racially profiled while doing his job, maybe we’re not imagining it when we feel judged or treated differently in our workplaces, in social settings or even on the street.

Khawaja says that he doesn’t blame individuals for these kinds of encounters, instead pointing to the fact that because Australian cricket has been synonymous with whiteness for so long, many people find it hard to believe a South Asian would actually be part of it.

So, is it changing? Not really, according to Khawaja.

“You see cricketers from Sri Lanka, Bangladesh, Pakistan, India, everywhere at a young level. But as you get up at a high-performance level, it just drops exponentially. It just drops, drops, drops.

“That’s where I’m trying to work with Cricket Australia saying, ‘Look, guys … you invest a lot of money into this, but something’s not going right. You’ve been doing it for 10 years and nothing’s changed’.” 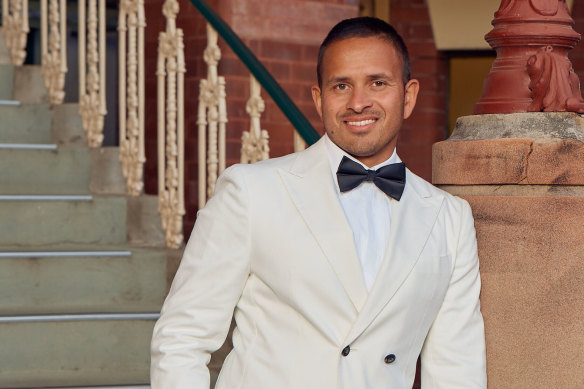 Usman Khawaja is the breakout star of the second season of Amazon Prime Video’s series The Test.Credit:Peter Brew-Bevan/Prime Video

Khawaja is clear on what the main problem is: the overwhelming whiteness of cricket administrators, selectors and coaches.

“At that high-performance level, you don’t realise it but a lot of the coaches [and] selectors are white,” he says. “There’s subconscious bias. If you have two cricketers, one brown, one white, both the same, the white coach is going to pick the white cricketer just because he has a son that might look similar to him. It’s what’s familiar to him.”

It’s a depressing, yet accurate, summary of the situation. The entire board of Cricket Australia is currently white, as are all the selectors, and the senior coaching staff.

But it also raises a key question: has that lack of diversity among the top echelons of Australia’s cricketing establishment affected Khawaja’s own career, particularly considering the controversial years he spent failing to be selected in the national side?

“There’s been plenty of times I should’ve been picked for teams and I wasn’t,” he says bluntly. “But it just made me have a bigger chip on my shoulder.”

As well as working with Cricket Australia and the player’s association to boost diversity at all levels of the game, Khawaja also undertakes outreach with underrepresented communities.

In one episode of the second season of the Amazon Prime Video series The Test, Khawaja is seen visiting a Muslim school in Brisbane, sharing his experiences of racism and helping to inspire students to give cricket a go. He sees his involvement in the show, a fly-on-the-wall style documentary series that captures raw moments inside locker rooms and among the team, as an important part of breaking down the “inner-sanctum” of Australia cricket.

“We go through the same things that the majority of the population goes through,” he explains. And when you break that down, and people can relate to that … I think that’s that’s really, really massive.”

If anything, he wishes the show was even more unfiltered, telling me he texted the show’s directors asking them why they had edited down his infamous exchange with former coach Justin Langer in 2018, ahead of the series against Pakistan in the UAE.

“There were a few more f-bombs in there,” he says laughing.

Whether it’s on-screen, on social media, or in conversations with his teammates and coaches, expect Usman Khawaja to keep talking about the changes needed in Australian cricket.

“We’ve come a long,” he says. “But I’ll keep doing it because I want people to know what it’s like.”

The Test is now streaming on Amazon Prime Video.