Scientists studying an extraordinarily small chameleon species, Brookesia nana, have learned an intriguing fact: While the male of the species might be the smallest reptile in the world, it has disproportionately large genitals.

They outlined their discovery last week in the paper “Extreme miniaturization of a new amniote vertebrate and insights into the evolution of genital size in chameleons,” which was published in the journal Scientific Reports.

Brookesia nana — “a new, extremely miniaturized chameleon” that is rare and possibly endangered, according to researchers — was found in the rainforests of northern Madagascar. Researchers measured a male and a female specimen.

The female measured roughly 28.9 millimeters or 1.13 inches long, while the male was smaller, at 21.6 millimeters or a little less than an inch long. 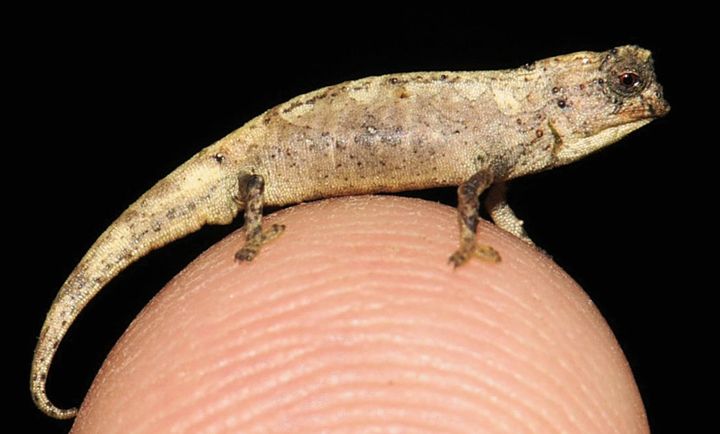 Despite its small stature, researchers said, the male had “large, apparently fully developed hemipenes” — in other words, a pair of penises — that measured about 2.5 millimeters (0.09 inches) long when fully exposed.

“In these miniaturized species, the smaller males may simply need larger hemipenes to allow for a better mechanical fit that makes successful copulation with the much larger females possible,” the paper states.

Mark Scherz, one of the authors of the study, tweeted that other chameleon species in the Brookesia genus also feature small males and larger females, though the Brookesia nana is believed to be the world’s smallest.

Scientists have speculated that the remarkable size of these reptiles may be due to “island dwarfism,” the belief that creatures living on islands — such as Madagascar — evolved to be smaller to make up for a lack of resources.

Scherz suggested that while the male Brookesia could evolve to be extremely small, its genitals likely could not.

“We think that this might also be related to size dimorphism,” Scherz wrote in a blog post. “If the female remains larger than the male, a constraint is placed on the reduction of the male genital size.”

The Brookesia micra — measuring about 1.1 inches long — was discovered in 2012 and is currently a close second for the tiniest known chameleon on the globe, fitting on the head of a match.