Half of all calls for homelessness help went unanswered in Victoria in January, and experts say no new permanent support staff have been funded in the past decade despite a three-fold increase in after-hours demand.

Data from The Salvation Army statewide crisis centre shows 49.4 per cent of calls went unanswered in January. The Council to Homeless Persons said other support services had been forced to turn off their voicemail due to lack of staff. 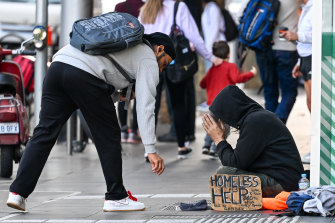 The council has called for the state government to fund more permanent staff, saying in its budget briefing that answering calls for help was the key to identifying people who needed support before they started couch-surfing or sleeping rough.

The Salvation Army said January was a particularly stretched month because pandemic support from the state government was wound back, while its staff was limited by COVID-19 and annual leave.

There were 26,101 calls to the after-hours crisis centre last financial year, marking a 50 per cent increase in a year, and a three-fold increase compared to nine years ago.

Jenny Smith, chief executive of the Council to Homeless Persons, said no extra staff had been permanently funded across services since 2009, even though homelessness increased 3 per cent each year.

“You can do a wonderful job preventing homelessness if you can support them at the time when they come looking for support,” Smith said. “When they’re already homeless, we’re less helpful.”

Of the people who seek help while they still have a home, 87 per cent stay housed. Of those already experiencing homelessness, only 28 per cent found permanent accommodation.

Eleven support workers – who help with issues related to Centrelink, landlords, finding a new tenancy or other services – were temporarily funded by the Victorian government during the pandemic.

The council believes keeping them permanently – and doubling the investment to 22 workers – could help another 40,500 people at risk of homelessness every year.

One Melbourne worker – who has two decades of experience in the sector but asked not to be named because they were not authorised to speak publicly – said staff were burning out and turnover was accelerating at a rate not seen before.

“If I open my door at 10am, I’m going to have people waiting at the door. I can’t get through it … I will never meet demand. Then that flows into phone calls,” the worker said.

The Productivity Commission’s annual report on government services, released in January, said Victoria’s capacity to find accommodation for those in need was improving. Less than one-third of demand for homelessness accommodation was unmet in 2020-21, compared to almost half in NSW.

But temporary Victorian government measures, boosted during COVID-19, have started drying up.

The Salvation Army said the spike in unanswered calls in January coincided with programs, such as the housing establishment fund, returning to pre-pandemic levels. Services also left the short-term program accommodating homeless people in hotels.

“These exits pushed people back through the short-term and emergency parts of the housing support service system, increasing demand at entry points, which flows on to the 24-hour service at St Kilda,” said Peter McGrath, the Salvation Army’s Victorian manager of homelessness.

The Victorian government has previously said 1600 people were transitioned into a stable home from the COVID-19 hotel accommodation program.

Smith said there was no federal strategy to deal with homelessness, and although the Victorian government was investing heavily in the construction of 12,000 social and affordable homes – most yet to be built – demand would not be met. 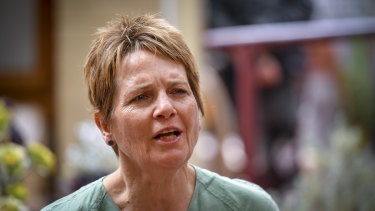 At the same time, rent increased in country Victoria by 15 per cent in the past two years, according to the Australian Council of Social Service. McGrath said that rise was causing a serious spike in regional homelessness.

She has noticed more clients carrying debts lately after having their rent suspended at the height of the during COVID-19 lockdowns.

There were 54,587 households on the housing waiting list in Victoria at the end of last year.

A government spokeswoman would not confirm whether funding for the 11 staff working across the sector would be continued.

“The government will have more to say about funding for homelessness services as part of the budget on May 3,” she said.