More than three-quarters of Australians expect COVID-19 cases to drop or stay stable, suggesting that the country is getting less spooked by the pandemic.

Only 7 per cent of Australians expect COVID numbers to increase in the coming months, down from 20 per cent in the same survey in March. 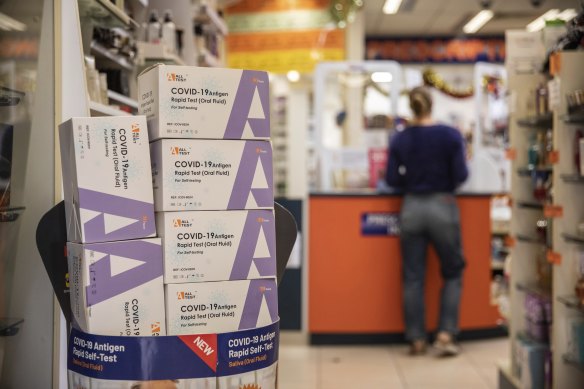 While Australians aren’t as spooked by COVID, they are still getting tested more than ever on the back of the availability of rapid antigen tests.Credit:Cole Bennetts

Across the country, 17 per cent of respondents now believe case numbers will decrease significantly in the next month or so, while 33 per cent believe they will stay the same for a while.

The exclusive survey, conducted by Resolve Strategic for The Sun-Herald and The Sunday Age, shows one-quarter of respondents think cases will significantly decrease soon, but then come back again to about the same level.

The expectations are broadly in line with expert opinion, with the end of winter expected to bring some reprieve in case numbers, but there is concern that Australia could be hit again when Europe and the United States enter their colder months later in the year.

The polling results suggest Australians are not becoming complacent, with testing rates increasing from the two previous surveys in January and March – probably on the back of the wide availability of rapid antigen tests.

Now, 35 per cent of respondents say they have been tested for COVID-19 in the past month, up from 25 per cent in January and 28 per cent in March.

Of the people who have had three injections, 53 per cent said they are likely to get a fourth.

Of the 7 per cent of respondents who had not received any COVID-19 vaccine, 46 per cent said they were still likely to get one.

Resolve director Jim Reed said the results reflected the actual trend of COVID-19 cases as well as the increasing comfort about living with the virus.

However, he said that didn’t mean there was now “ambivalence” and a “head in the sand” mentality.

“That sentiment is reflected in the slower take-up of new rounds of vaccine, but it doesn’t mean people don’t care any more,” he said. “This survey shows more people are using RAT tests more often, suggesting that they are making sure they or their kids don’t pass on COVID to others.”

Reed said COVID-19 was no longer top-of-mind for voters.

“People are far more worried about the price of food and fuel than if they are likely to catch COVID while shopping for them,” he said.

“Many Australians are simply living with COVID now. Case numbers may be coming down, but that’s just adding to the sense of security and optimism that they feel by not having to stay at home, check in or wear masks everywhere they go.”

Associate Professor Sanjaya Senanayake, an infectious diseases expert at the Australian National University, said Australia has a large immunity built up in the community on the back of vaccination and an estimated 13 million cases this year.

He said the current wave of cases was coming to an end as the weather gets warmer, but that winter in Europe could bring a new variant or sub-variant of Omicron now that there are few, if any, travel restrictions.

“COVID is with us to stay, but this winter outbreak is on the way out,” he said. “However, what see this summer will depend to a large extent on what is happening in the northern hemisphere.”

He said there was a chance the BA.4 and BA.5 sub-variants of Omicron could be in Australia for a while, and it would be prudent to get new Moderna vaccines tailored against those strains.

“BA.5 is the most transmissible and immune evasive variant or sub-variant so far. It will be displaced by something but I’m hoping it won’t for a while,” Senanayake said.

Another 2532 cases were reported on Saturday in Victoria, where the seven-day average for new cases is 2936.