Many years ago, when I was at my unhappiest, I decided I needed to begin therapy. And damn, it helped in ways too profound to adequately explain. You have to be there to truly get it.

Serendipitously, at the same time one of my closest girlfriends was regularly seeing a counsellor, too. So we'd meet and talk about what we'd learnt about ourselves, and about the triggers that incited anxiety, depression, rage, fear and self-loathing. It brought us so much closer. Today, she's like a sister to me, someone who pulls me up on my crap and vice versa. 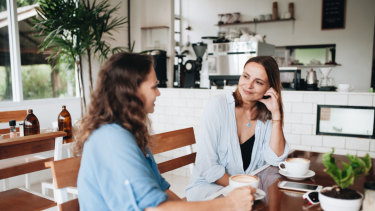 Too many times we’d listen to someone complaining and realise that they had so much work to do on themselves, were so stuck on the lower rungs of enlightenment, that any progressive discussion was redundant. Credit:Shutterstock

While we were both going through this process of self-examination, we found ourselves culling friends. Some were easy to shed. Some, not so. And we both readily admit that for a while there, our tolerance for others became fraught.

Too many times we'd listen to someone complaining and realise that they had so much work to do on themselves, were so stuck on the lower rungs of enlightenment, that any progressive discussion was redundant.

They didn't want to go to the scary, dark recesses of their psyche and look at what their real issues were, so eventually we gave up on their griping. We became therapy snobs.

We did have many talks analysing whether this was a fair thing to do. In the years since, some of these friends hit emotional rock-bottoms that left them no choice but to dive into the murky recesses of their past. Those who did are now back in our fold, wiser and warmer than they were previously, humbled by the lessons they've learnt.

Others, who still proudly claim that they "don't need professional help" or believe therapy is only for people "with real psychiatric problems" continue to repeat destructive patterns that don't abate with time or self-medication.

There is the girlfriend who consistently hitches herself to unavailable men, mostly married, then complains that their promises to leave their wives never come to fruition. Another suffers crippling panic attacks, yet she prides herself on eschewing the antidepressants her doctors prescribe.

There's a male friend who declares he wants a committed relationship, yet cheats on every woman he's with, and another whose depression is so dark and deep that he admits suicidal thoughts are a daily if not hourly occurrence. None believe they require medical intervention, seeing it as a cop-out, or shameful. As my girlfriend and I lament, more fool them.

These people think nothing of taking their car for a service. They work out and watch their weight. They take vitamins and pills for high cholesterol. They'll visit a beautician for a break-out, a doctor for a physical ailment. Some even have hoses put up their bums for a colon cleanse. Yet, somehow, their emotional state isn't worthy of maintenance. Their mental health is something that supposedly sorts itself out on its own. It's madness.

So, to all those who may want my ear to complain about the same old problems, who want to share their disillusion with the world, who don't believe they have issues, I say, please take note of the following.

Yes, therapy is hard. It's scary and painful and you sometimes feel you are drowning in your own ennui. But when you keep diving down, you eventually hit the bottom of the pool and it propels you back to the top.

I have always wanted to be the best person I could possibly be. I didn't want my unfortunate start in life to dominate my future. I wanted to be empathetic. I wanted to control those bursts of emotional bile, those bouts of anger, jealousy and self-pity that seemingly erupted out of nowhere but, I now see, have a very distinct cause.

And with counselling, I actually did.

If you want to live with self-hatred and negativity, that's your choice. Just beware – my girlfriend and I may have little time for your moaning if you do.

This article appears in Sunday Life magazine within the Sun-Herald and the Sunday Age on sale June 30.