TOM UTLEY: Like Boris Johnson, I set my watch 10 mins fast… and Tom Time is not the only trick I use to kid myself

Ever ready to think the worst of Boris Johnson, his critics pounced on him this week when they thought they’d caught him doctoring a photograph to deceive the public.

The picture in question showed him standing solemnly in the Cabinet room at 10 Downing Street, head bowed and hands clasped in front of him, supposedly joining Monday’s nationwide one-minute silence for the victims of the Plymouth shootings.

The silence had been scheduled to begin at 11am precisely — and sure enough, the clock on the mantelpiece behind him appeared to show that the photograph was taken at a fraction of a minute past that hour. But then a sharp-eyed observer spotted that the hands on Boris’s watch pointed to 11.14. 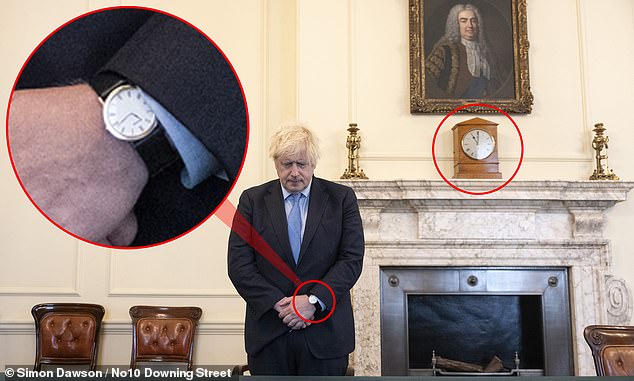 Ever ready to think the worst of Boris Johnson, his critics pounced on him this week when they thought they’d caught him doctoring a photograph to deceive the public

Gotcha!, screamed his enemies. The unscrupulous scoundrel had clearly turned up late for the silence, and had ordered the hands on the mantelpiece clock to be put back to 11 for the photo-shoot, so as to conceal his habitual tardiness.

But like a fool (or so they thought) he had forgotten to change the time on his watch, which was clearly visible in the photograph.

‘Disrespectful buffoon!’ raged one online critic. ‘Everything about this man is fake!’ fumed another. ‘All he does is lie!’ spat a third.

Except that on this occasion, at least, Boris was not guilty as charged.

It seems not to have occurred to those critics that the clock on the mantelpiece might have been telling the right time, while his wristwatch was set 12 or 13 minutes fast. Yet such is the demonstrable truth.

Don’t take my word for it. Look instead at the photograph’s EXIF data (it stands for Exchangeable Image File Format, if you’re interested). As I understand it, this is the computer code embedded in online images, which reveals the precise time at which they were captured.

In this case, the code shows that the picture of Boris observing the silence was taken just before 11.01am — exactly the time indicated on the mantelpiece clock.

If you’re still unconvinced, study the EXIF data of other photographs taken of the PM on different occasions, in which the time shown on his watch can be seen.

One such shows him in early July on his way to watch England playing Denmark in the Euros. In this, his watch reads 6.58pm. Yet the EXIF file reveals that the picture was actually taken at 6.46pm. In other words, Boris does indeed keep his watch running at about 12 or 13 minutes fast.

You don’t have to explain to me why he does it. For I adopted just the same ploy throughout my full-time working life, when my days were governed by train timetables and newspaper deadlines. 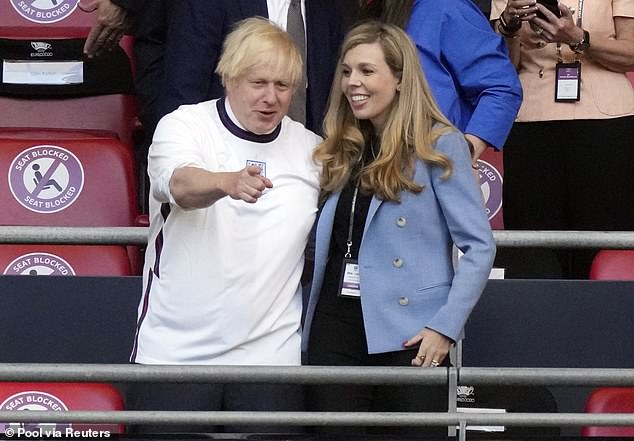 One such shows him in early July on his way to watch England playing Denmark in the Euros. He is seen at the game with Carrie

Like a great many others, I suspect, I set both my alarm clock and my wristwatch a little over ten minutes fast. My intention, I assure you, was to deceive nobody but myself.

Like Boris, I have a long and disreputable history of being late for everything: late for school, university lectures, trains and meetings, late delivering my copy to the sub-editors, late for parties and late getting home from the pub.

Early on in my career, I found that just occasionally, it spurred me to get a move on if I sought to deceive myself that the time was further advanced than in fact it was.

True, I knew that my watch was fast. But the human mind has an almost limitless capacity for self-deception — and sometimes, if only rarely, this can be pressed into the service of punctuality. In a strange psychological way, I found that setting my watch fast helped me catch that elusive train.

I bet that Boris, notorious as he is for arriving late to his press conferences, speaking engagements and meetings with ministers, deliberately keeps his watch running fast with the same aim in mind.

If so, he and I are in exalted company. I think of the Queen’s grandfather, George V — a notoriously obsessive stickler for punctuality, who insisted that every clock on his Norfolk estate should be set half an hour ahead of Greenwich Mean Time (until his death in 1936, so-called Sandringham Time was also enforced at Windsor and Balmoral).

The one difference is that the King’s aim was to spur others into arriving early for shooting expeditions and meals. Unlike me, he himself was never unpunctual.

But I fear that I’m also guilty of other exercises in self-delusion. How many times over the years have I assured myself that one day I’ll make my fortune by writing that best-selling novel? In my heart of hearts, I know perfectly well that I’ll never get round to it. Yet the thought that I might never fails to cheer me up.

Shockingly — and I hesitate to confess this — I’m also guilty of tampering with the bathroom scales so that they don’t register the extra seven pounds I’ve put on since the first lockdown.

Rather than trying to lose weight by giving up the fattening foods I love, I simply set the needle to half a stone below zero, step onto the scales and — bingo! — they tell me I’m not an ounce heavier than I was back in 2019.

Yes, of course I know I’m cheating — in this case, pressing self-deception into the service of vice rather than virtue. But in a strange way, I find it boosts my morale to see the needle pointing where it always did before.

Now, before you dissolve in contemptuous laughter, can you honestly claim that you’ve never sought to deceive yourself in any way?

Have you never bought a lottery ticket, for example, telling yourself that it could be you who wins the jackpot? Be honest, you know very well that it won’t be you. Far more likely, it will be a career criminal with a record as long as your arm, who will promptly desert the mother of his children and spend his winnings on smashing up Lamborghinis.

Have you never told yourself that you have a beautiful singing voice? I’m sorry to break it to you, but oh no, you haven’t. If you’re anything like the countless contestants on X Factor, who’ve convinced themselves that they have what it takes to make them superstars, you have the charisma of Keir Starmer and a voice like a scalded cat.

And here are some questions for my fellow dads of a certain age. Haven’t you occasionally told yourself that women still find you attractive? Have you never thought that you can still dance, as you did at those discos in the 1960s and 1970s, without embarrassing your entire family?

Have a look at that video, showing you strutting your funky stuff at your daughter’s wedding, and think again.

One last question: have you never rolled home from the pub, telling yourself that the missus won’t notice you’ve had one over the eight? If she’s anything like Mrs U, she jolly well will.

No, let’s face it, there’s hardly a single one of us who hasn’t at some stage practised self-deception — from the woman who believes she looks ten years younger in that new frock, to the child with knock-knees and two left feet who thinks he’ll grow up to play for Man U. But can’t we dream?