Prime Minister Scott Morrison says there has not been enough progress when it comes to attitudes towards women and domestic violence.

There was still a culture that justified or excused gender inequality and drove violence against women, he said, and responsibility for that fell on every Australian. 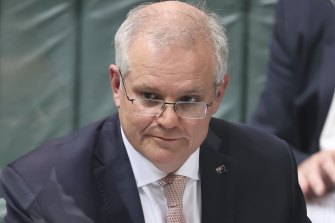 Prime Minister Scott Morrison: “We have to do better and strive to be better.”Credit:Alex Ellinghausen

“Right now, too many Australian women do not feel safe and too often, they are not safe, and that is not OK. There is no excuse, and sorry does not cut it,” Mr Morrison told the women’s safety summit.

“We have to talk about the way some men think they own women. About the way some women are subject to disrespect, coercion and violence. This must continue to change. Because if not now, when?”

Mr Morrison read some letters and emails he had received from women detailing their experiences and said he could feel the rage and frustration that nothing had changed.

The women’s safety summit, which will inform the development of the next national plan to reduce violence against women, was organised after the outpouring of anger about the treatment of women when former Liberal staffer Brittany Higgins went public in February with an allegation she was raped in Parliament House in March 2019.