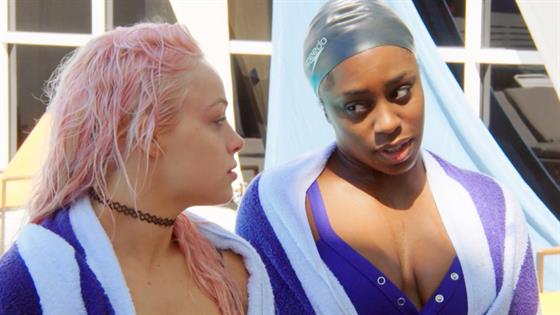 Is Trinity Fatu ready to go “Under the Sea”?

In this clip from Tuesday’s all-new Total Divas, the WWE superstar (known professionally as Naomi) joins Liv Morgan for a mermaid class. Although Fatu gives the lesson her all, it’s clear she’s skeptical about the whole thing.

“I don’t know what Liv was thinking about when she signed us up for this mermaid show,” Trinity comments in a confessional.

After hearing instructions from one of the professional mermaids, Fatu transforms into “Trin with the Fin.”

“That looked really, really good,” the instructor praises after the swimming lesson.

However, the wrestling maven’s fun is quickly diminished while looking over costume options. Specifically, Trinity isn’t happy that the mermaid attire includes sheer bottoms and a shell bra.

“We have a couple of choices for you to wear,” the instructor adds. “It is slightly see-through, so if you have a dark thong to wear underneath it…Do you have anything like that?”

Thankfully, Fatu reveals that she has booty shorts she can wear with the skintight ensemble.

Even though Trinity jokes her “booty meat” won’t fit in the bedazzled fins, she appears genuinely worried that she’ll show too much skin. Also, Trinity is convinced her boobs won’t fit in the “little shells.”

“My stomach is out. This is becoming too much,” Fatu concludes later on. “This is all the stuff I’ve been trying to avoid at work. Like, no. Nope. Nope, don’t want to do it.”

Will Trinity eventually embrace the Little Mermaid lifestyle? For that answer and more, be sure to watch Tuesday’s all-new Total Divas.

Watch a brand new episode of Total Divas Tuesday at 10 p.m., only on E!