Perhaps it’s trying to see a pattern where there isn’t one, or trying to make sense out of a chaotic world, but a theme of sorts appears when you look back over the operas of the past year. 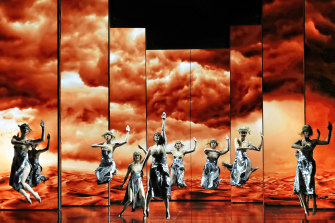 Opera Australia’s epic staging of Aida was slated as the triumphant return of the art form after a patchy 2020 of cancellations and delays – and it was. It had all the pomp and grandeur that the word “opera” tends to invoke. Intricate costumes, a large cast, and in the case of this staging, huge, movable screens that glided around the stage augmenting the mood by conjuring up images of weather, of a rider galloping across an impossible distance, and, sometimes, a somewhat-on-the-nose-with-its-symbolism panther.

Screens form an important part of most, if not all operas – the surtitles allowing audiences to follow along with every line, to fill in the detail between the broad brushstrokes of plot that comes across through the combination of acting, costumes, music and set.

In Aida the use of screens turned backdrop almost into characters. It’s an exciting innovation though not one easily replicated, simply due to cost and the fact that outside of this production overuse would make the novelty wear off.

Victorian Opera’s staging of the vibrant cabaret opera Lorelei also featured an innovative use of screens – emojis deployed to great effect in among the words on the surtitles. Lorelei is a feminist retelling of the myth of Lorelei, a woman who (supposedly) lures sailors to their deaths through her siren song. It firmly declares itself as a modern opera through its costumes, themes and unwillingness to treat women as disposable two-dimensional characters – the use of emojis underscores this. 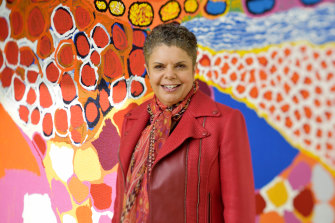 For the debut of Parrwang Lifts the Sky, however, the necessity of screens was bittersweet, falling more heavily on the side of bitter. Composer and librettist Deborah Cheetham’s opera based on a traditional story connected to Wadawurrung country was forced to cancel its season and move the production online. There were silver linings – the production was still able to reach an audience, potentially even a wider one than might otherwise have been the case with a purely in-person season, and the camera work allowed for the intricacies of the costumes and sets to be appreciated from up close.

Live productions, however, are designed to be experienced live. There’s an energy that passes back and forth between audiences and performers; the real-time feedback of applause or silence, of knowing when a joke has landed, or a surprise takes all the air out of the room. Digital access is a great accompaniment, and one that hopefully will continue – but one can’t help but feel that, seen only through a screen, a little bit of Parrwang Lifts the Sky’s magic lay just out of reach.

In the case of Melbourne Opera’s joyous and camp production of Macbeth, the final night’s in-person performance was also available to be live-streamed. It’s an approach that allows for a foot in each camp – the best of being there in person combined with the reach of the internet.

Screens couldn’t save all the operas planned for 2021 though. In looking back over the year, it is marked as much by absences as it is by the performances that did manage to go ahead. Some productions were rescheduled for 2022, including the world debut of The Butterfly Lovers, and The Who’s Tommy, slated for late February. Others, however, were struck off completely. The Australian Contemporary Opera Company were forced to cancel their production of The Enchanted Pig, and Victorian Opera cancelled their semi-staged concert production of Voss, a rarely performed Australian opera based on the Patrick White novel. The latter slipped into obscurity in the ’90s and now it seems it will stay there for the foreseeable future.

2021 in opera saw old stories brought new life and new stories told in innovative ways. It also saw tales not told, roles rehearsed but never seen before a live audience, and gave us a glimpse into a possible hybrid future for performances.

Opera is not a static art form. Like all art, opera responds to the world around it – and always has. 2021, like 2020 put a lot of obstacles in the way, but the work that did manage to get to an audience showed that classic tales can always be reimagined, that there is so much new territory yet to be explored, and that even the oldest stories can cast new light on contemporary issues.