It is just over a week since the US House Speaker Nancy Pelosi landed in Taiwan, setting off a diplomatic firestorm with China. Any thought that the visit would be a temporary glitch in the relationship appears wishful thinking.

Soon after her visit, China turned its bellicose language into the largest display of military force it has ever carried out against Taiwan. During a four-day military operation, it launched long-range artillery live-fire shooting drills, flew dozens of warplanes over the unofficial line of control between the two nations in the Taiwan Strait and carried out what is believed to have been the first launch of missiles over Taiwan. Beijing also dragged Japan into the conflict when it fired missiles into areas inside Japan’s exclusive economic zone. 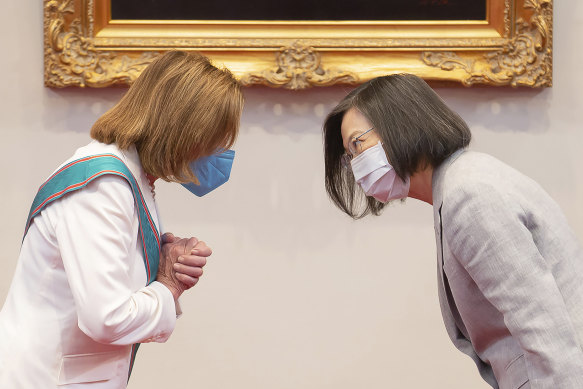 Nancy Pelosi and Taiwanese President Tsai Ing-wen during their meeting in Taipei.Credit:AP

Along with the show of force, Beijing also announced it was ending all dialogue between senior-level military commanders and talks on climate change action with America. In response, Australia joined diplomatic protests from America and Japan over the show of force. Defence Minister Richard Marles urged an end to military operations and accused Beijing of breaching United Nations rules requiring countries to ensure peace and security in international waters. It had little impact.

There is a growing belief in America that the visit will be used by Beijing as a pretext to step up its operations to intimidate Taiwan for months or years to come, and may speed up its plans to take control of the island nation. That was backed by the Chinese ambassador to Australia, Xiao Qian, who stated this week that the use of force was an option to achieve reunification so the people of Taiwan might have the “correct understanding” of China and after the state council in Beijing said it would use “all necessary measures” to achieve reunification.

For an issue that not so long ago was considered a remote possibility in the short to medium term, it has quickly become one of the hottest diplomatic problems.

What is discouraging is that, as international editor Peter Hartcher explained recently, so much of the recent escalation has more to do with the domestic politics of America and China than any geopolitical spat brought about between the two nations. With the US midterm elections coming up in November, Pelosi is fighting not only for her seat but for the Democrats to maintain control of the House of Representatives, and by extension her position as Speaker of the House. It appears that Pelosi went to Taiwan for her own political advantage and against the wishes of US President Joe Biden and his national security team. When asked recently whether he supported her visit, Biden said simply: “That was her decision.”

On China’s side, President Xi Jinping is also facing an array of domestic issues that gave him little choice but to forcefully react to the Pelosi visit. Xi is looking to secure an indefinite extension of his role as China’s leader at the 20th Communist Party Congress, which is also expected to be held in November. Since coming to power a decade ago, Xi has made the reunification of Taiwan and mainland China, which is popular within China, one of his core pledges.

It therefore became a matter of fortifying his reputation that he had to respond so strongly to the Pelosi visit. It also gave Xi an opportunity to divert attention from his own failures. The continued use of lockdowns to combat COVID-19 outbreaks and the enormous real estate bubble that is in the process of bursting – threatening a widespread banking crisis – has brought growth in China crashing back to earth.

In this context, Taiwan has become a backdrop for the political machinations going on within China and America. There would be few observers who would believe that Taiwan is any safer or less likely to be absorbed by mainland China because of what has played out over the past few weeks.

Since coming into power, the Albanese government has tried to lower the temperature over relations with China. And, to a certain degree, it has worked. There have been more talks between senior ministers of Australia and China during the past few months than for some years. But the fragility of the relationship is put back on display when even measured criticism from Australia on China’s forceful actions over Taiwan is met with strong language from Beijing for Australia to butt out of its “internal” affairs.

What is evident is that Pelosi should not have gone. It was unnecessarily antagonistic and revealed the dangers for Australia in being all-in with America. China is an authoritarian state, but its growing power means it will have legitimate aspirations to have defence and foreign affairs interests in the region. We are going to have to live with them trying to muscle in. Australia can play a constructive role in trying to temper relations with China while maintaining its stand on human rights and national sovereignty. We don’t need to treat every aspect of America’s attitude and behaviour as gospel. In fact, as a true friend, we should be able to point out where we think they got it wrong.