Viewers have accused George Clarke of ‘ripping off’ a couple after he recommended renovations costing £100,000 more than their ‘maximum’ budget to transform part of their home.

Mark and Natalie, from Broadstairs, Kent, bought a Georgian house for £750,000, with seven bedrooms, three bathrooms and two kitchens, and were desperate to transform the former care home into a ‘cosy family’ space.

Their brief was to renovate the living spaces, bathrooms and one bedroom, and while they said they could be flexible on costs, they told George the maximum budget was £60,000.

But those watching last night’s Old House New Home were left stunned when it was revealed the family had followed ‘all the structural changes’ suggested by George, and spent £160,000.

One accused him of ‘ripping off’ the family, while another added: ‘Spending £100K more than you expect is not my idea of flexible.’

Another wrote: ‘My house needs doing up but I would never call George. When I say I have £10K, that’s all I have…NO MORE!’ 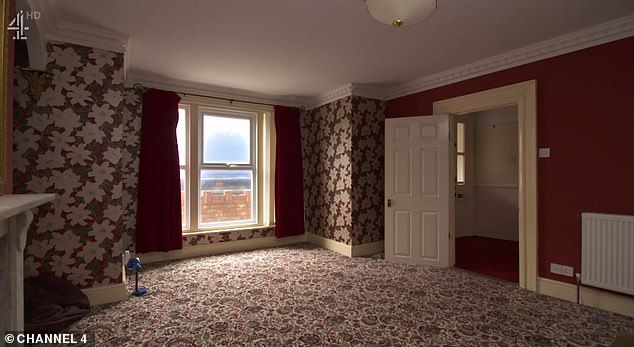 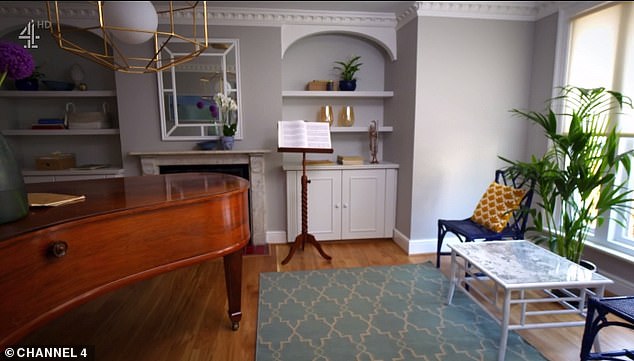 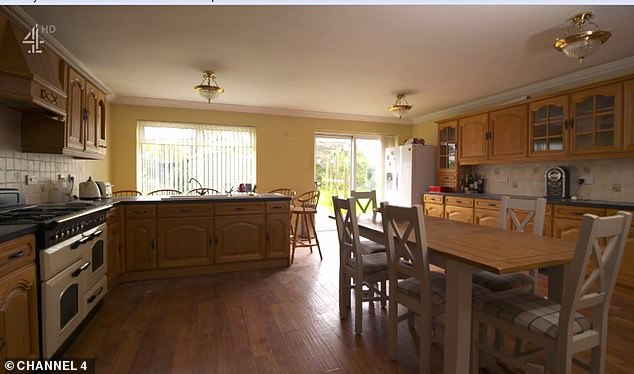 The former care home featured two kitchens, with the couple admitting it didn’t feel like a cosy family home 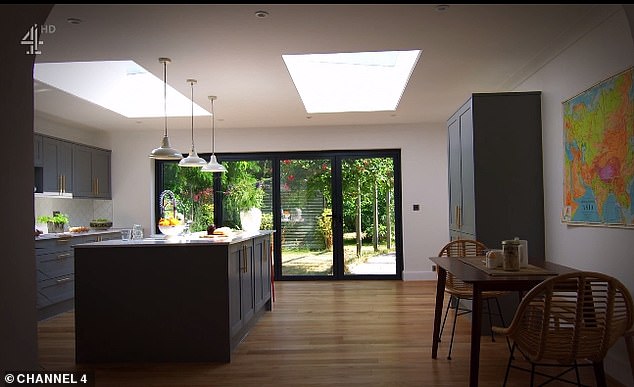 Accountant Mark and music teacher Natalie were novice renovators, and told the architect what they wanted out of the property for their family-of-five.

‘We want it to feel like a family home, quite cosy and vibrant, mirroring what the family is like,’ Natalie said.

They were eager to update the property’s three bathrooms, none of which had been touched for over 30 years.

The former care home also had two kitchens, and three downstairs toilets lined up along one corridor.

And while the house was Georgian in period, many of the features were 80s ‘add ons’, with a jumble of cheap carpet and garish wallpaper. 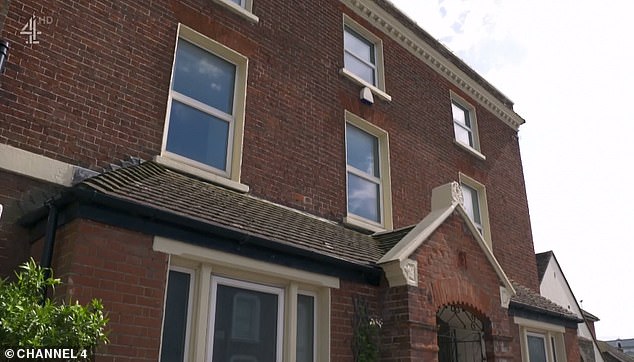 The seven bedroom Georgian home still had some of it’s original charm, but was full of dated 80s style features 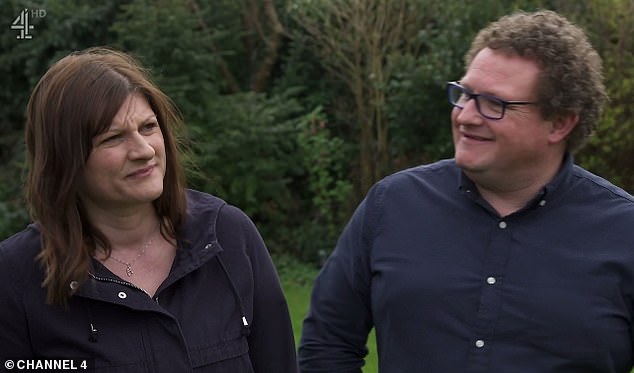 The couple said they were ‘flexible’ with their budget, but when pressed told George that £60,000 was the maximum they’d like to spend 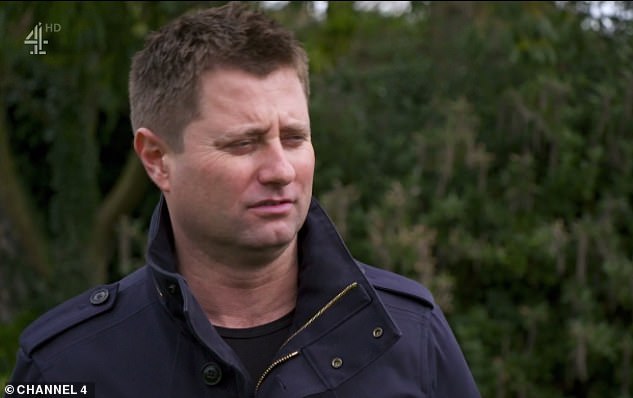 George Clarke admitted his work was cut out trying to transform the couple’s property on their £60,000 budget

George called the property ‘dark and gloomy’, suggesting the couple add plenty of glass to add light to the house.

And the couple said one of their main necessities was a ‘music room’ to allow Natalie somewhere to teach.

They decided not to do anything with six of the bedrooms, but wanted to update just one for their 14-year-old son, Alex.

The only bedroom of the seven to be transformed was their fourteen year old son, Alex’s. 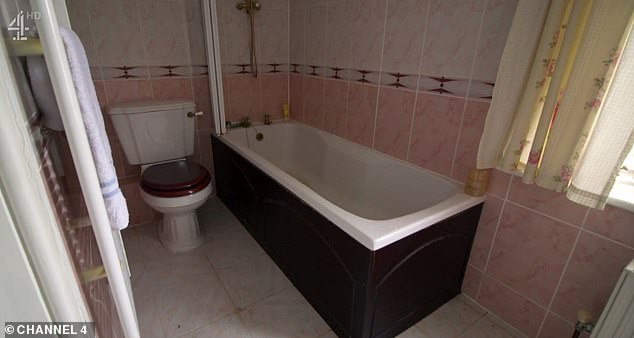 The property featured three bathrooms, which George said hadn’t been updated in over 30 years 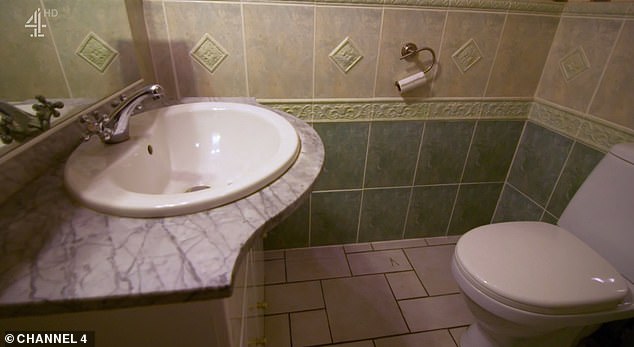 And when George asked them for their budget, they assured him they ‘could be flexible.’

The architect went on to press them for their ‘maximum’ and they admitted it was £60,000.

He seemed stunned, saying: ‘Well you’ve got your work cut out or I should say, I’ve got my work cut out, redesigning something for you on that budget.’ 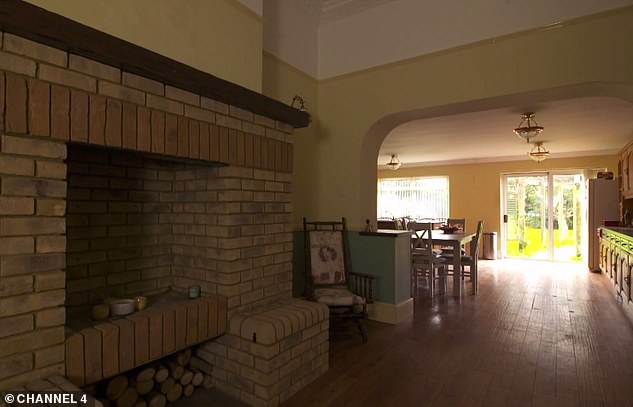 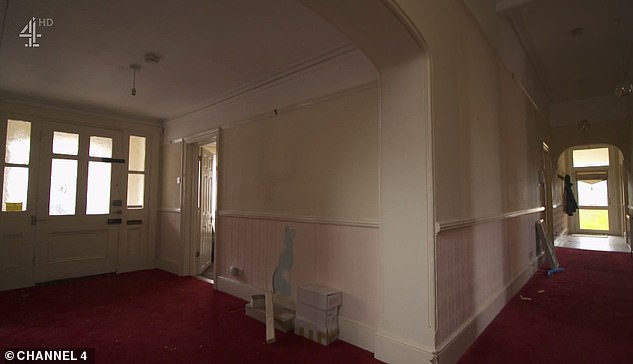 George was stunned when the couple suggested their budget was just £60,000, with the architect saying his work was ‘cut out’ 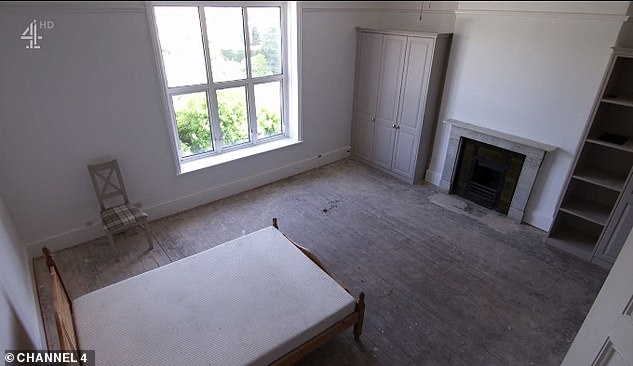 George also turned his eye to just one of the properties seven bedrooms, setting his sights on teenager Alex’s room

And viewers were left stunned by the modern transformation, with the couple admitting they loved their ‘perfect property’ which had changed in just months.

The dark, dated hallway was transformed thanks to trendy wallpaper and a chic oak flooring that ran through the whole of the downstairs.

The music room, that Natalie so desperately wanted, was stripped of its garish wallpaper and carpet and given a chic muted finish with grey paint on the walls.

Natalie beamed as she entered the room, saying: ‘We might have the kids fighting to practise in here, for once!’ 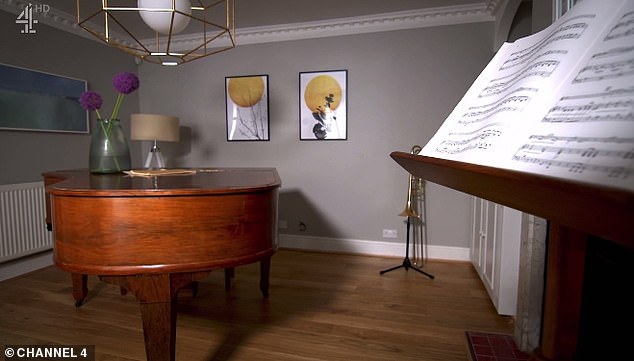 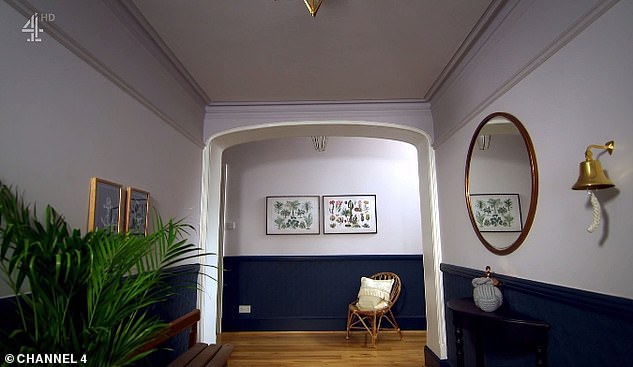 George called the three toilets in a row ‘one of the strangest legacies’ in the house, but the space was converted into a utility room and just one bathroom.

He revealed that he’d given the couple a ‘water closest’ toilet, ‘specially made just for you to celebrate your lovely new house.’

Builders transformed it into a light, bright open space with ‘all the structural changes’ that he’d suggested, including a modern trendy fireplace. 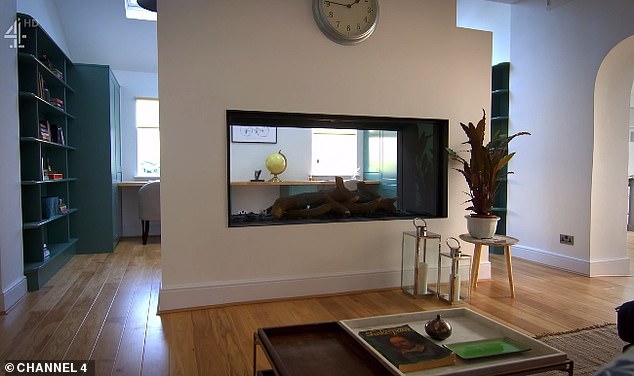 In one of the biggest transformations, the couple knocked through walls into what was their ‘second kitchen’ and added a modern fireplace, creating a chic open plan living space

Following George’s advice, the flat roof on a second kitchen was lifted, and the couple knocked through walls to make it part of the open-plan living space.

The couple were wowed by the house, with Natalie saying: ‘I never thought it would be like this, it’s amazing.’

In the kitchen, George ditched the dated country pine for a more modern look, adding new glazing and sky lights to flood the room with light. 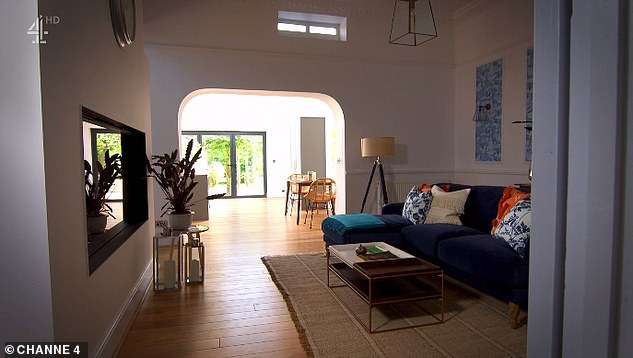 The drab and dinghy living space was transformed with the help of new skylights, windows and huge glass doors at the back of the property

He said: ‘It’s turned what was three very drab messy spaces into one seemliness space.’

Mark admitted: ‘It’s hard to believe how much has changed in just a few short months.’

And teenager Alex’s bedroom was also redesigned with a lick of paint, with the teenager saying it ‘looked awesome’.

Sitting the couple down, George said: ‘I take my hat off to you, you’ve never done anything like this before. 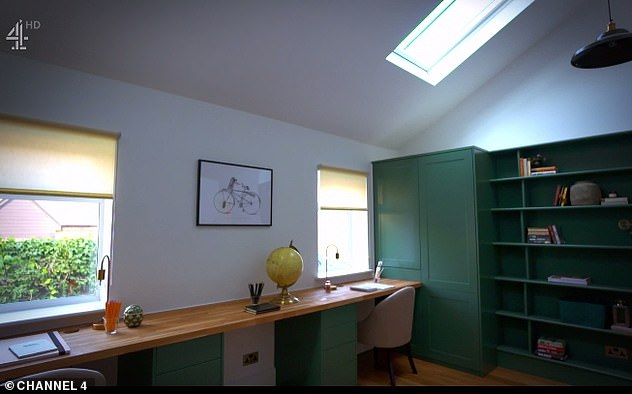 The room that had been their ‘second kitchen’ was changed into a study, with the ceiling and roof lifted to create a brighter larger space 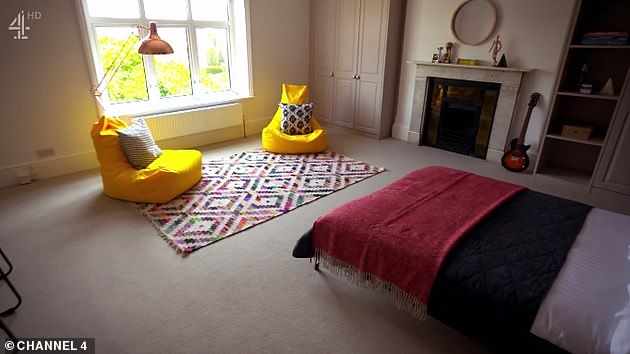 Viewers were shocked at the price of the renovation, particularly as only one of the seven bedrooms was transformed (pictured)

‘You thought this was just going to be a decorating job, but look what you’ve done.’

Mark explained: ‘I think our first interaction with you, you helped us see the potential of the place.

‘It made us more ambitious and we’ve done a lot more than we thought we were going to do.’

However, viewers were left stunned as the couple revealed they’d spent £100,000 over their initial ‘maximum’ budget, saying the total cost had come to £160,000. 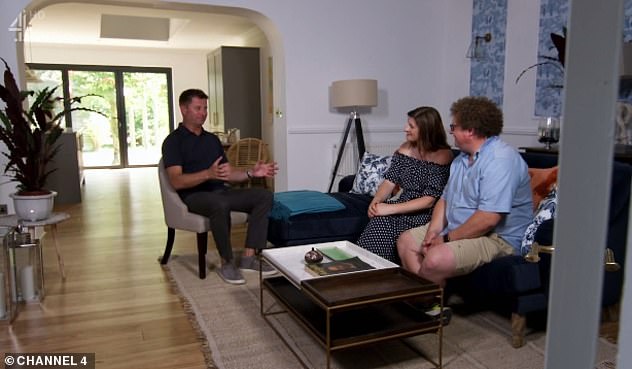 The couple admitted that George had helped them see the ‘potential of the place’ during their first conversation, which led them to be more ambitious

Viewers were left stunned by the price of the renovation, with one saying George had ‘ripped them off’

And while the couple said ‘it was all worth it’, those watching at home weren’t so sure.

One commented: ‘George has ripped them off!’

While another commented: ‘Where do the family of five eat if they only have a dining table for two people. I’d be gutted to spend £160k and have nowhere to eat.’