Voters have swung against the federal Coalition in a warning to Prime Minister Scott Morrison over his hold on power, cutting the government’s primary vote from 41 to 38 per cent since the last election.

The rebuff has delivered gains to the Greens and Pauline Hanson’s One Nation as some Australians shift their votes to minor parties amid concern at the Coalition’s performance. 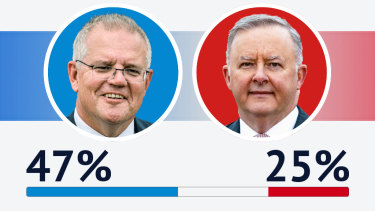 But Labor has missed out on a boost to its core support, with its primary vote unchanged at 33 per cent despite the government’s failure to meet targets for the rollout of COVID-19 vaccines.

The exclusive survey, the first in a new initiative from The Sydney Morning Herald and The Age with research company Resolve Strategic, shows Mr Morrison has an advantage on personal leadership despite the setbacks for his party.

Mr Morrison is the preferred prime minister for 47 per cent of voters, compared to 25 per cent for Labor leader Anthony Albanese, with 28 per cent undecided.

While 86 per cent of Coalition voters named Mr Morrison their preferred prime minister, only 49 per cent of Labor voters said the same for Mr Albanese.

The Resolve Political Monitor found Mr Morrison generated a positive net leadership rating of 12 percentage points, a calculation based on 50 per cent of voters rating him good or very good and 38 per cent rating him poor or very poor, with another 10 per cent neutral.

Mr Albanese had an overall result of minus 6 points on the same question, with 35 per cent rating him good or very good, 41 per cent poor or very poor and 25 per cent neutral.

The relative advantage for Mr Morrison was based in part on stronger support in NSW and Queensland as well as among voters aged 55 and over.

Mr Albanese, in contrast, has his strongest support among voters aged below 34, a cohort where he enjoys a net positive rating of 17 per cent.

Resolve director Jim Reed said the results, based on dozens of questions to 2006 voters earlier this month, suggested many Australians were choosing to “park” their votes with minor parties.

“We find that those people moving from the Coalition to minor parties and independents are far more likely to be uncommitted and to be using that vote to protest or send a message,” he said.

“They want the major parties to focus and lift their game.

“There are always a number of factors at play, but our analysis is pointing to the handling of COVID-19 being a major focus, including the interaction between federal and state governments.

“Many people decide their vote as we near an election, so it’s natural to have people moving around at this point in the cycle, especially when we have such a dynamic political environment.”

Mr Morrison vowed on Monday to proceed “carefully and cautiously” with the rollout of COVID-19 vaccines but has admitted to problems with the program, as Mr Albanese attacks him for dropping the original target to complete first doses for adults by October.

Labor has also lost ground in the two biggest states, with its primary vote falling from 35 to 29 per cent in NSW and 37 to 34 per cent in Victoria, but it has increased its support from 27 to 30 per cent in Queensland and surged from 30 to 40 per cent in Western Australia.

The findings raise the possibility that state factors, such as support for Labor Premier Daniel Andrews in Victoria and Liberal Premier Gladys Berejiklian in NSW, are influencing voter attitudes to federal parties.

The national trend is strong enough to give Labor a small advantage over the Coalition in two-party terms, but the lead is within the margin of error of 2.2 per cent for the poll, which surveyed 2006 voters earlier this month.

The swing against the Coalition was spread evenly across most demographic groups but was more pronounced among those on higher incomes, with support falling from 49 to 43 per cent among those earning more than $100,000 a year.

Labor gained support from the same workers, with its primary vote rising from 29 to 33 per cent.

Respondents were asked who they supported at the last election and who they would support if an election was held this month.

The results lifted the Greens’ primary vote nationwide from 10 to 12 per cent, at least 1.5 per cent above the party’s result at the last federal election.

The poll shows an even bigger shift towards One Nation, with its vote jumping from 3 to 6 per cent, twice as much as its support at the last election.

Because the poll asked voters to nominate their primary votes in the same way as they filled in their ballot papers for the lower house at an election, there is no “undecided” category in the results, a key difference with some other surveys.

In another departure from some other surveys, the Resolve Political Monitor asks a pre-emptive question about whether respondents are registered to vote, discarding results from those who are not.

Resolve is a polling company established by Mr Reed, who was previously group director of research and strategy at CT Group – formerly Crosby Textor – and senior research director at Newgate Communications. His work includes contracts with the federal government.

Chief political correspondent David Crowe will be online for an hour from 1pm to reply to reader comments on the survey results. Leave your questions in the comment section below.