When your home really IS a castle: They’ve got minstrels’ galleries, battlements and dungeons (just don’t mention the energy bills and endless repairs!)

Wandering through the drawing room at Penllyn Castle in South Wales, Jude Edgell imagines hosting extravagant parties here. With its glittering Waterford crystal chandeliers, handpainted wallpaper and centuries-old Louis XV-style mirrors, it would make quite the setting for a proud hostess.

But far from being a daydream, this will soon be a reality for Jude and her husband, who bought the castle four years ago and are painstakingly converting it into an eight-­bedroom, seven-bathroom family home, complete with parapets and 72 acres of grounds.

‘We’d actually been looking for a holiday home in Spain and ended up being mad enough to buy a castle instead,’ laughs Jude, 59. Her husband Terry, 56, is the owner of a timber import business and the couple have four sons, aged between 16 and 30.

They are among the very few people to have bought a castle in order to live in it as a private home. While Wales is home to about 600 castles, with another 4,000 in England and more than 1,500 in Scotland, large numbers of these are ruins or have been turned into hotels. 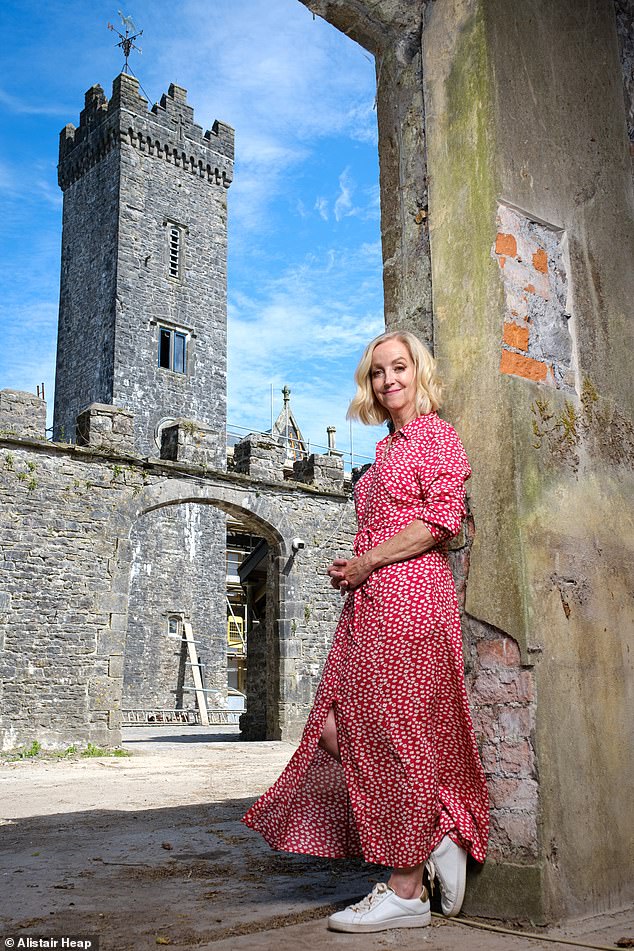 Jude Edgell at Penllyn Castle in South Wales. With its glittering Waterford crystal chandeliers, handpainted wallpaper and centuries-old Louis XV-style mirrors, it would make quite the setting for a proud hostess

Others, of course, have been handed down through generations of aristocratic families — yet, these days, many are no more than show homes, while their owners live in smaller properties nearby.

Not even the heirs to the throne can honestly say they live in an actual castle. This week, it was confirmed that the Duke and Duchess of Cambridge and their three children will move into Adelaide Cottage — a house in the shadow of Windsor Castle.

So for Kate’s benefit, what’s it like for Jude being queen of her very own castle?

Not quite as glamorous as it sounds, she admits.

‘I’ve learned to expect a problem with each stage of the work, so when there inevitably is one, I’m no longer stressed by it,’ reflects Jude, a former medical rep who is now managing the renovations full-time. ‘I first saw the castle in my 20s when a friend and I ventured up the driveway and thought, “Wow, I can’t believe people actually live like this.”

‘Over the years I’d say to my husband that if it ever came up for sale, I’d love for us to buy it. But when it did go on the market in 2018, it was semi-derelict and, even at our second viewing, I said to Terry: “Forget it, we can’t do it.”’ 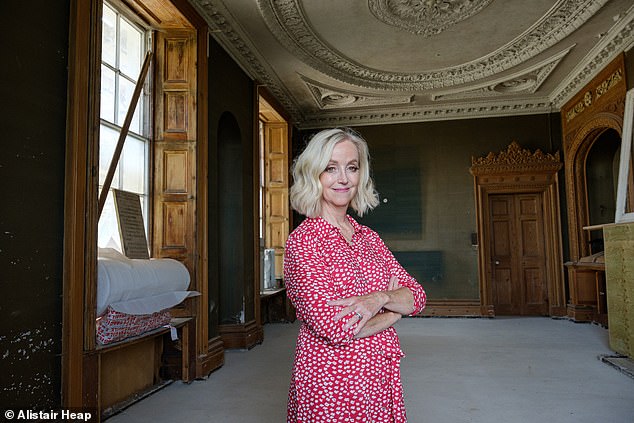 Jude’s previous house once belonged to Tom Jones. She bought her new home for just over £1million

But Jude couldn’t quite shake the spell Penllyn had cast and eventually they bought it for just over £1 million. Their previous house, which once belonged to Tom Jones, was sold.

Friends and family were frankly stunned at the news. ‘One of our friends came round, fished a tenner out of his wallet and gave it to my husband, saying “This is all the change I have, but take it, you’re going to need it,” ’ says Jude.

‘I’d done up houses before, but mostly just decorative work, not the complete renovation of a listed building. It’s been the hardest three years of my life,’ she adds.

‘We’ve already spent over £1 million, including re-roofing the place. But it’s still only a shell thanks to being riddled with dry rot. The parapets all had to come down and be rebuilt, and the sweeping oak staircase is currently being taken apart piece by piece.’

What’s more, Jude is doing everything using traditional materials such as lime plaster, charting the work on Instagram @MyWelshCastle. Aside from all the bathrooms and bedrooms, there’s a school room, morning room, housekeeper’s room and, of course, the formal drawing room, which stole her heart.

And just like the Queen at Windsor, the couple have plenty of space for relatives; one of their sons is now living in a cottage in the grounds.

What do the children think? ‘They just want to have a castle party when it’s all done,’ says Jude. Will she allow it? ‘Definitely not! They’ve got form for holding rowdy parties in other houses.

‘We found the old plans from 1869, when the castle had 15 bedrooms and one WC — which always makes me laugh,’ she adds. ‘Furnishing it will be a challenge as the rooms are vast. The dining room will easily take a table with 14 chairs and when I ordered a set of beautiful French sofas for one of the reception rooms, they were dwarfed by the room.’ 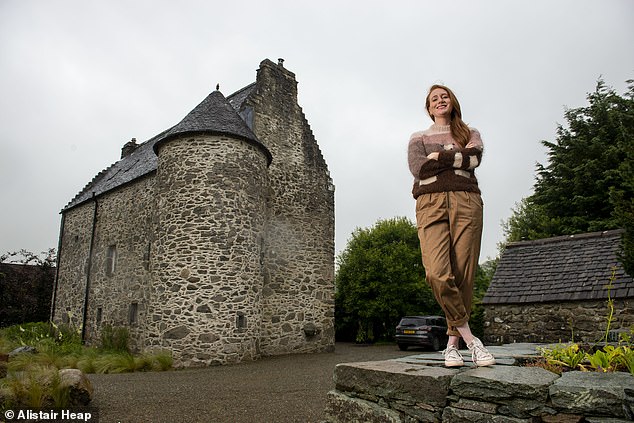 As you might expect from a home dating from 1790, there are rumours Jude and Terry share the place with ghosts.

‘My husband and the plumber have both seen a man walk through a wall in the same place, and when we had to hack off the rendering in that spot there was a blocked-up doorway,’ Jude reveals.

‘There have been sightings of ghostly children and reports of the sound of giggling, both from our builders and a friend who worked at the castle years ago.’

Even that doesn’t faze her.

‘My only regret is we’re not younger and that we didn’t raise our boys here, but perhaps our grandchildren will grow up here instead.’

Playing amid the ruins sounds like a child’s dream, but it’s reality for the young family of skincare specialist Alison MacColl and her lawyer husband Alistair, both 55. They bought the bijou Mains Castle in East Kilbride three years ago, when their daughter and son were seven and five respectively.

‘My husband has always dreamed of living in a castle,’ says Alison. ‘He was always on the lookout for castles for sale, and we actually viewed this one back in 2002. But we’d just bought our first home together in Edinburgh’s West End, and the timing wasn’t right.

‘By the time it came up for sale again in 2019, I’d changed my mind. We’d had our kids, and our youngest was starting school. Our friends weren’t even surprised — my husband loves history, and has always been so obsessed with castles that they knew it was only a matter of time.’

The couple paid just over £500,000 for the tower-style castle, a design popular in Scotland between 1300 and 1650. ‘It’s like a four-floor townhouse with three bedrooms, utility room, tiny kitchen, a bathroom and a couple of ensuites, as well as a Great Hall,’ Alison explains. ‘But I can’t deny that I miss having a large open-plan kitchen. 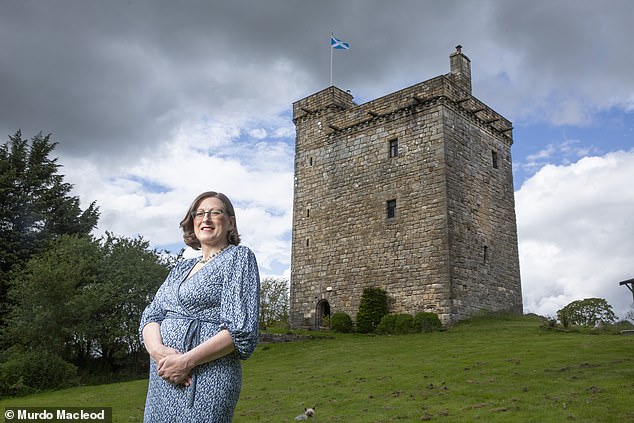 Skincare specialist Alison MacColl and her lawyer husband Alistair, both 55 bought the bijou Mains Castle in East Kilbride three years ago, when their daughter and son were seven and five respectively

‘We’ve also got a minstrels’ gallery that’s currently my husband’s office, and a windowless “pit prison”, which is a sort of one-person dungeon. My husband joked to the children that it was the naughty room.

‘When my son, Angus, told his friends we live in a castle they thought he was making it up, but luckily they’ve been to visit since and seen for themselves.

‘Some of their friends get a bit scared of the very steep stairs, so I’ve started asking parents to come with them for playdates. Funnily enough, no one’s ever turned down the chance to come and have a look round the castle. But my son says the best part about living here is going on to the battlements with his dad to help change the flag.’

The family relocated from a six-bedroom Victorian semi, spread over four floors on a main road in Edinburgh. ‘The floorspace in the castle is smaller than our old house, but we have three acres of outdoor space with a wood, a beautiful rose garden, and so much wildlife including a badger, a family of foxes, geese and deer,’ Alison says. ‘All three bedrooms — ours has hand-painted frescos on the ceiling — are located in the castle tower, and the children look out over the loch. 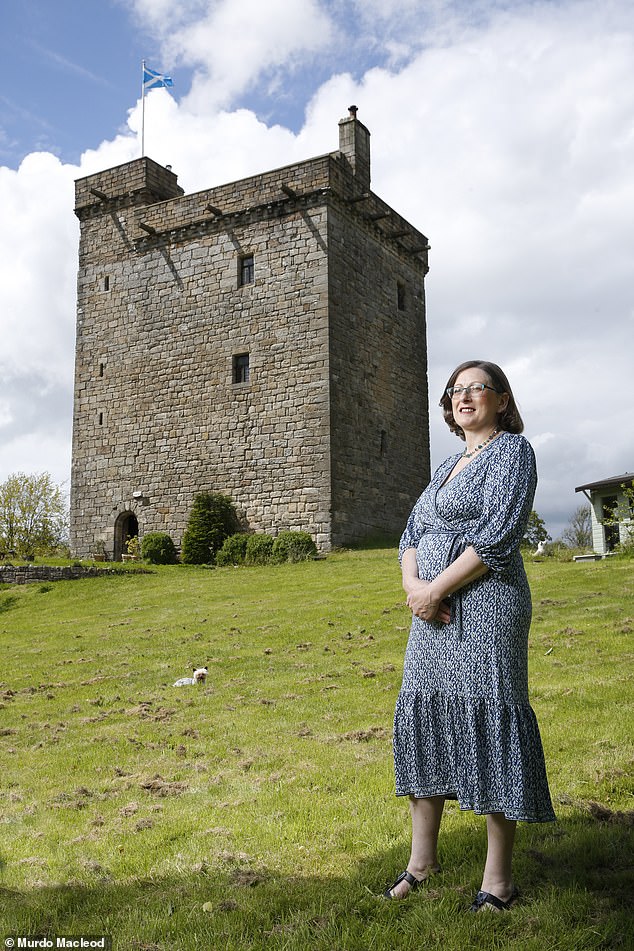 ‘Unlike the vast historic castles I visited with my parents as a child, ours is cosy. With fuel prices as they are, I’m relieved about that. We have an oil-fuelled Aga in the Great Hall and the oil has shot up from 35p to £1 a litre.’

Heating costs aren’t something that former radio host Stef Burgon had to worry about at her previous home in Dubai. Yet she insists she’s thrilled to have swapped her one-bedroom flat there for her very own castle.

Stef, who’s 43 and originally from Newcastle, and her husband Simon Hunt, 40, fell in love with Scotland during a road trip over Christmas 2014.

‘Simon came back to Newcastle with me to meet my family, and then we headed to Scotland where we loved the hills and lochs and the food — things we didn’t have in Dubai,’ she recalls.

‘Shortly after, we read a piece in the Daily Mail about Kilmartin Castle being on the market for less than the price of a parking space in London. Before we knew it, we’d sent my parents to view the castle. All our friends said we would be crazy to buy it — but we did, for £331,780.’

They initially gave it a cosmetic makeover and hired it out on AirBnB while they continued their lives in the UAE, Simon as the creative director of an advertising company. But then they got married in the castle in 2016 — and a brush with disaster, far from making them throw in the towel, helped convince them to move in full-time to keep an eye on things.

‘The day before our wedding, the septic tank at the castle broke and cost £3,000 to fix. We were told it would probably go again within a year. It was a reminder that every time we earned a bit in rent from the castle, something would go wrong and all the money would go,’ Stef explains.

So two years later, having saved like mad, they left Dubai and, after a brief stay in a caravan, moved into the castle on the west coast of Scotland, two hours’ drive north-west of Glasgow. As well as installing underfloor heating and re-laying flagstone floors, they added antique furniture and highend fittings, including copper baths worth £5,000.

It also has a new kitchen, a dining room, five luxurious bedrooms, a grand hall, an outdoor kitchen with a pizza oven and a wild pond overlooking the glen. They rent the castle out exclusively two or three times a month (kilmartincastle.com).

The castle was built in 1550, and incredibly Stef and Simon are only the fourth family to own it.

‘Every time we drive through the large gates into the grounds we have to pinch ourselves,’ says Stef. ‘I wasn’t a princess-loving little girl, I grew up in a council house and left school with no qualifications. But I worked hard as an office junior in an estate agency. Ten years later, I was running a flagship office selling luxury properties, never even dreaming that one day I’d own a castle.

‘My family are less impressed by our castle though — my dad always whinges about hitting his head on the low doorways!’

Stef estimates they’ve invested between £250,000 and £350,000 of their savings in renovations and another £100,000 on the garden, partly funded by a government loan during the pandemic.

Meanwhile, monthly running costs amount to an eye-watering £7,000, including the mortgage, £800 on electricity and oil, cleaners, gardeners and a chef who helps out occasionally. Their income from hiring the house out just about covers those costs.

Stef says buying the castle remains the best decision she and Simon have ever made.

‘Of course, everyone thought we were crazy,’ she says. ‘But coming up the drive every day and seeing the beautiful gardens, then stepping into the gorgeous hall, you can’t help but understand why we did it.’