On weekends across Australia, you’ll see them: the long queues outside feted eateries. Some people even look like they’re having fun. What are they thinking?

Whoever came up with the line that the British love a queue had clearly never been to The Grounds of Alexandria in Sydney or Melbourne’s iconic Lune Croissanterie on a Saturday morning.

Queuing culture, particularly for buzzy, popular eateries, has well and truly taken over Australia. Spending your weekend lining up for a $50 brunch consisting of a couple of poached eggs and a flat white used to be a phenomenon limited to trendy inner-city suburbs, but it’s now a common occurrence across the suburbs. Good luck trying to get a roll from Harvey’s Hot Sandwiches in Parramatta or a samosa from Chatkazz in Harris Park without booking out a solid wait in your calendar.

Things have gotten so out of hand that food blogs like Time Out now un-ironically publish lists of “Food queues that are worth the wait”. So, what’s going on? Do we just love the order and process queues bring? Or is it possible we’re seeking out the long lines as some sort of flex on how willing we are to sacrifice for the perfect pastry, coffee or sandwich? 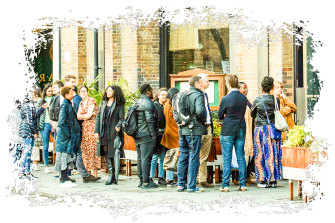 How long have we been queuing?

According to Dr Joe Moran, the author of Queuing for Beginners: The Story of Daily Life from Breakfast to Bedtime, queuing as a regular part of life is linked to the Industrial Revolution, when large numbers of people moved to urban areas, necessitating more structure around the distribution of goods.

Economic crises throughout the late 19th and early 20th centuries, including the Great Depression, saw queues become more common, particularly for the urban poor who relied on charity to help put food on the table.

The modern view that queuing is synonymous with being British seems to have formed during World War II, when rationing was commonplace for large swathes of the population. Of course, queuing for rations wasn’t a uniquely British phenomenon, but the many photographs and newsreels from the time seem to have helped convince us that Brits were particularly adept at it.

But the queues we’re talking about these days, outside hip cafes and restaurants, aren’t about rations. So, what’s driving that urge?

Why do we queue today?

There are a number of psychological reasons for joining queues, starting with the simple fact that they seem to suggest something desirable, says Dr Meg Elkins, a behaviour economist at RMIT. “Why else would people forgo their time to wait in a queue for something that isn’t quality?”

“Heuristics are mental shortcuts that we use to make decisions because we have to make so many decisions in our day. Let’s say we’re going past a restaurant. If we see a queue, it decides for us that it must be a good place to eat.”

The question of scarcity is still relevant though, even when we’re not talking about rations, because of its relationship to FOMO (fear of missing out). A croissanterie such as Lune, in inner-city Melbourne, is known to sell out every weekend – so that drives an impulse to get there early and line up to avoid going home empty-handed. It’s an important persuasion tactic, says Elkins. “We see a queue and think, well, there’s a scarcity for that product, so it triggers our desire to be persuaded to stand in line.”

Talking to friends and colleagues though, there appear to be a multiplicity of different reasons for queueing.

“You won’t find me queueing for brunch at my favourite cafe. If there’s a line I will go somewhere else,” one younger colleague said. “But if it’s somewhere I have never been and I have had it on my list for a while then I am happy to queue. For example, the other week I waited in line for yum cha because I had never been before. I queued for the experience.”

“I’ll queue for something I know is good, but I won’t just hop into a queue because I’m walking past and see a long line,” said another.

On a clear Saturday morning outside one well-known eatery in Melbourne, the queue stretches from the counter to the footpath and around the corner.

Queueing “is my definition of hell”, says James, a visiting Sydneysider, as he waits with his friend Karan, from Melbourne. James has bad memories of queues from the time he went to Disneyland but he’s willing to make an exception for this place because he and his family are on holiday, and they’d heard about the food.

“I’ve never queued before,” says John, also visiting from Sydney with partner Betina. “I’ve got other things to do.” He’s never even queued at a nightclub. Once, when he and Betina were faced with a musical festival ticket queue they couldn’t see the end of, they went off and enjoyed cocktails in a bar instead. This weekend, though, he and Betina are visiting their daughter, Luisa, so it’s a special occasion. “They talked me into it,” says John.

“Well, that is just ridiculous,” Sarah laughs. “Is it TikTok famous or something?” That’s what she’d said when she’d first seen the queue she’s now standing in. She, partner David and their puppy, Baxter, have driven half an hour to get there and are going to wait patiently. (Baxter seems sanguine.) Friends recommended the place, David explains, and they want to try something different.

Asked what their limit for queuing is, customers’ answers vary from, “I’ve already exceeded it” (the moment they stepped into the line); to “15 minutes” (“I’m too impatient”); to over an hour, with one younger group once waking up at 5am to queue for a fancy new breakfast item. Novelty is a factor, this younger group explains, as well as finding out what the social media and word-of-mouth hype is all about.

Queuing could even be a kind of adventure. “There’s a social factor,” says Darren, who is waiting with friends Patricia and Evan. Queueing gives you time to “catch up”. But on second and subsequent visits, the group won’t queue forever. “There’s a certain threshold,” says Darren. “Half an hour.”

The Saturday queue for croissants at Lune in Melbourne.Credit:The Age

To what extent is queuing about showing off?

Aside from all the logistical reasons we might queue, there’s something else at play. Queueing demonstrates that we have the social and economic capacity to give up our time to get a highly desired product. We might all want the most delicious croissant, samosa, or gourmet bacon-and-egg roll, but only some of us have the ability to sacrifice time and other social activities to acquire them.

So even when the desired product is not particularly extravagant or expensive – think, a banh mi or a great hamburger – the act of queueing for it bestows it some kind of intangible value, similar to what Marx referred to as commodity fetishism. According to Marx, goods become fetishised when their value is delinked from their purpose or the amount of labour that went into producing them.

Queueing itself can also help improve our enjoyment of whatever we were queuing up for, because of the “community” element of being part of a group activity, Elkins says, “because you’re talking about the pain of the wait … and you’ve got this collective purpose”.

Add in the Instagram factor, where people in the queue want to show off their willingness and ability to queue by posting about it, and you’ve got a self-perpetuating hype cycle that just keeps the queue going.

Of course, the positive experience of being in a queue is linked to how good the product that you’re waiting for is. A 30-minute queue can be worth it if you really are eating Australia’s best croissant. Something dry and chewy? Not so much.

“It’s not fair that people are seated first come, first served,” says Elaine, as she waits with George and Jerry for a table at a popular Chinese restaurant in Seinfeld. “It should be based on who’s hungriest.”

The key thing with queues is to follow whatever rules have been set by the venue. Remember, this is a social contract you’ve voluntarily entered into. Do they want you to line up? Are you supposed to put down your name and number down? Do they want you to leave and come back when they call you?

Respect the staff and other patrons – which can be frustrating, especially if you’re tired and hungover. Staff are doing their jobs and other customers are in the same situation as you.

Queues are also a prime breeding ground for passive-aggressive behaviour. Who hasn’t let out a deep and highly audible sigh when the one person they thought was ahead of them turns out to have been holding a spot for a group of 12?

Again, it’s frustrating but we’re all in this together. Accept the reality of the queue and try and enjoy yourself. Do a quiz. Get to know the person next to you. Or, if it all gets too much, and you really are very hungry: just walk away.

Will we ever live in a post-queue world?

COVID-19 has made queues more common, through a combination of business closures, staffing shortages, and changes to how bookings work. Unfortunately, for those of us who don’t have the time, energy or patience for standing in lines … they’re probably here to stay. Not only are people clearly willing to line up, businesses have figured out that they generate awareness and buzz.

In fact, some businesses deliberately structure their logistics in a way to encourage queues because of the positive impacts of being seen as so desirable. Minimising seating space in order to create a sense of “exclusivity” is one tactic, as is deliberately restraining supply to make sure a shop sells out early, generating a sense of urgency.

Of course, there are ways to deal with queues. Bookings are the most obvious. That takes the spontaneity out of things – not everyone wants to book in for a sandwich and a coffee on a Saturday morning. Still, more and more businesses are prioritising bookings post-COVID, to help manage costs and plan ahead.

One restaurateur told us they’d received criticism after moving to a bookings-only model. The goal, they said, was to help manage public expectations but instead customers were frustrated that they couldn’t just wander down and get a spot.

The good news is that some venues are getting creative with how to keep you occupied in the queue. One hotpot outlet, Haidilao, offers customers a manicure while they wait in line.

Who knew queuing could be so fun?