“It’s really hard,” she says, “especially with the dramatic license that needs to be taken …”

Monica Lewinsky’s past is getting the Ryan Murphy treatment on “Impeachment: American Crime Story” — and getting her to collaborate with the TV mastermind was no easy feat.

More than two decades after the Clinton scandal made her a household name, Lewinsky was initially reluctant to work with Murphy on bringing her story to life, after having shared her side of things with a Ted Talk, in Vanity Fair and, pretty exhaustively, in the A&E docuseries “The Clinton Affair.”

According to The Hollywood Reporter, Murphy eventually won her over after “at least one run-in, several phone calls and a dinner in Manhattan,” all while insisting the show would be told from the perspective of the women involved — not Bill. In addition to giving Lewinsky, played by Beanie Feldstein, the spotlight, the series will also highlight Paula Jones and Linda Tripp. Lewinsky, however, was the only real-life figure with a producer title and consulted with for support.

Lewinsky told the publication that working on the show has been difficult, noting that she hired a therapist to sit with her via Zoom when giving notes throughout production. “It’s really hard, especially with the dramatic license that needs to be taken,” she explained. She also said she avoided being on set for anything involving her character and only showed up once during filming — for a day featuring Annaleigh Ashford’s Jones.

The publication noted that Lewinsky was allowed to sound off on every single scene in the series, visited the writers room and gave “extensive notes” on scenes involving her or about things that were left out “for time or dramatic reasons.” She also made sure the show included a scene in which she flashed her silver thong to Clinton, something the writers initially planned on avoiding.

“Listen, I would’ve loved to have been really selfish and said, ‘That’s great that you guys think we don’t have to show that, fantastic,’ but I’m incredibly experienced in understanding how people see this story,” she said of why she pushed back, feeling she’d be blamed in the public for its removal anyway.

“So, ultimately, I felt two things,” she added, “One was that I shouldn’t get a pass because I’m a producer; and two, that it was unfair to the team and to the project because it would leave everybody vulnerable.” 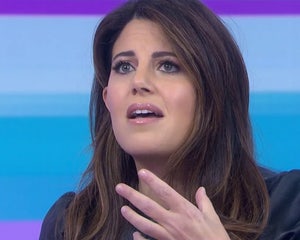 The only thing she didn’t consult with the writers on were any “intimate” moments between the Clintons — for “myriad, obvious reasons,” said Lewinsky.

While it has been a somewhat triggering experience for her, Lewinsky explained her biggest goal in participating in the series to to make sure “this never happens to another young person again.” At the same time, she also added, “I’m nervous about being misunderstood again.”