A woman who was waiting for her rugby-player husband at the airport was surprised with 30 roses by 30 of his teammates as a heartwarming gesture to mark their 30th wedding anniversary.

Julie Raby, 51, from Bristol, was waiting in the arrivals lounge of Bristol airport for her husband Mark, 52, who had been away on a rugby tour, when she was approached by each of his thirty friends with a red rose.

A heartwarming video captured the moment the string of members from Mark’s team embraced Julie and handed her over a flower.

Left speechless by the romantic gesture, Julie who works as a quality engineer, teared up when she spotted her husband carrying the final rose.

‘I was totally surprised, I didn’t expect it at all,’ she explained. ‘He does surprise me with romantic gestures when I least expect them – he’ll go to do the shopping and return with a bunch of flowers. 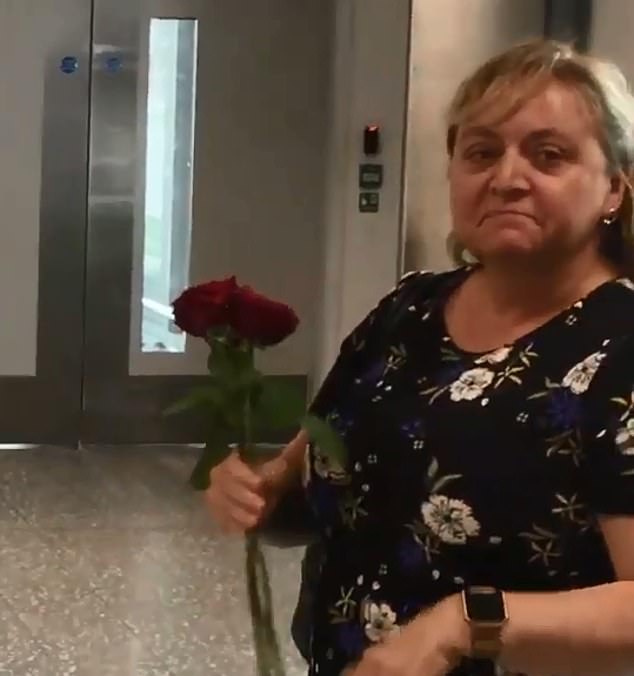 Julie Raby, 51, (pictured), from Bristol, was surprised with thirty red roses from her husband Mark, 52, while waiting at Bristol airport on Monday 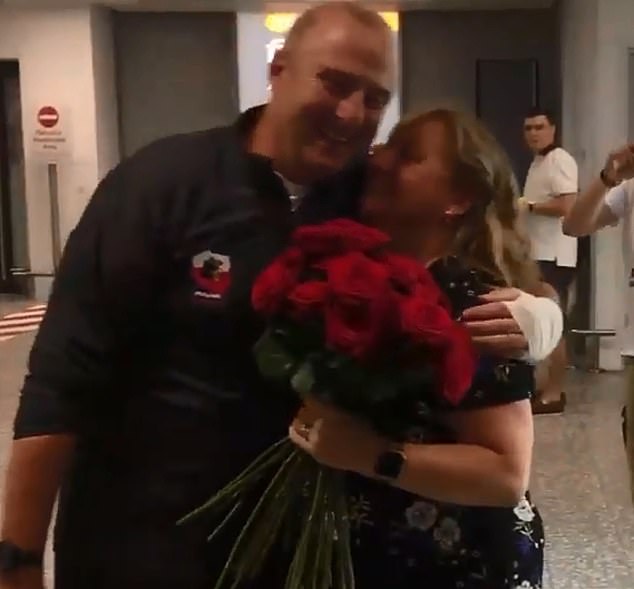 The rugby player (pictured with Julie), who had been away for a tournament in Poland, organised the gesture to celebrate their 30th wedding anniversary

Julie’s devoted husband, who organised the sweet gesture, is part of the veteran rugby squad for Nailsea and Backwell in Bristol.

The team were taking part in a tournament in Krakow, Poland, which had been planned months in advance and saw the team return on Monday, June 24.

Unfortunately for Mark, that was the same day as his 30th wedding anniversary – but his doting wife Julie had insisted it was fine for him to go.

As a thank you, Mark organised for 30 roses to be delivered to the airport and they were then handed to Julie one by one.

‘There were 30 roses for 30 years of happy marriage,’ explained Mark.

‘I had been away for a rugby tournament in Krakow and it had been planned for months, unfortunately it coincided with my 30th wedding anniversary. 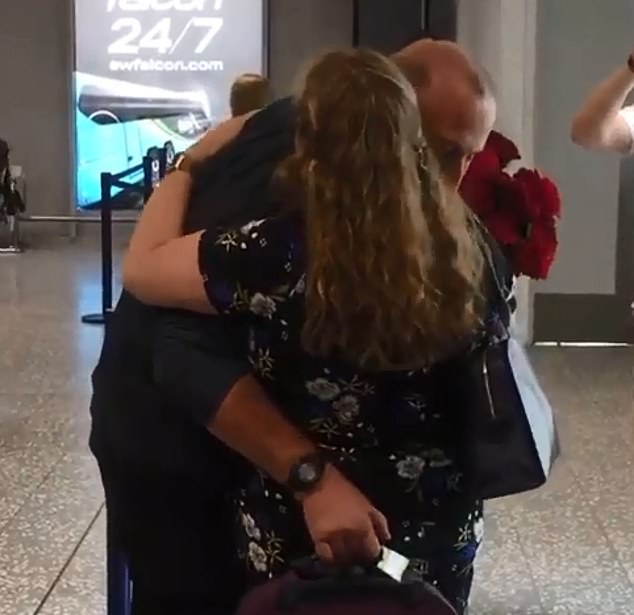 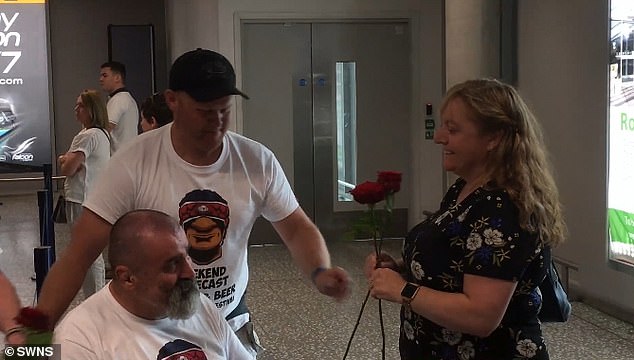 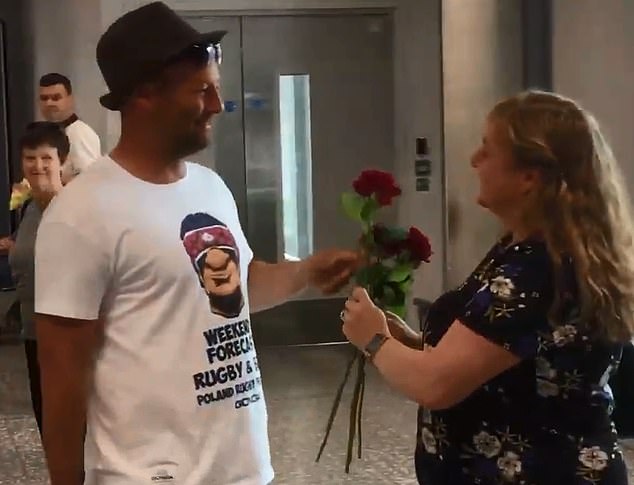 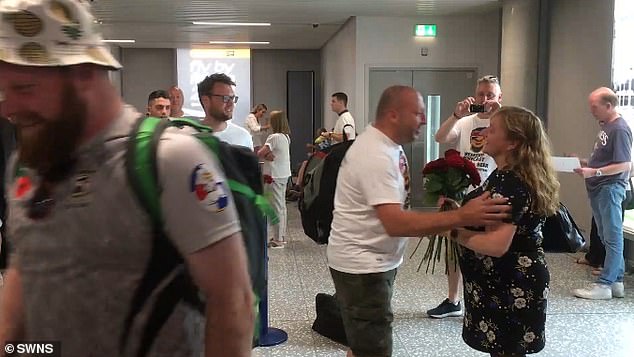 Initially, Mark told his wife he wouldn’t go, but when Julie told him she didn’t mind, he booked the return tickets.

‘I thought, “what can I do to say thank you?” he explained. ‘So I ordered 30 red roses and I agreed it with the airport.’

‘One by one the lads walked out with a rose and gave it to her, then I walked up and gave her the last one.’

He added: ‘She had tears in her eyes, it was my way of saying thank you after 30 years of marriage.’

Recalling how the sentimental gesture had stunned her, Julie revealed that Mark has a habit of catching her off guard with acts of affection.

‘We were going out for a meal that evening so I thought that would be the romance for the day,’ she said. ‘I thought I was just picking him up from the airport.’

‘It was a huge surprise, it was very romantic.’ 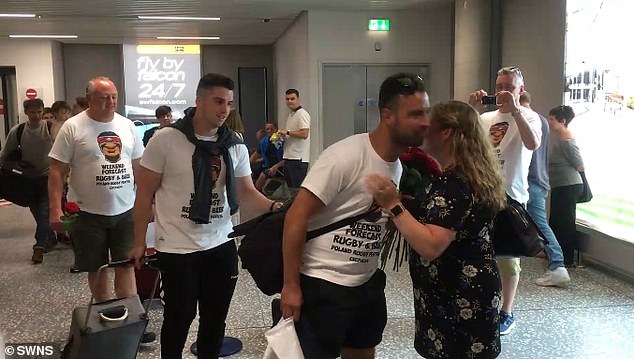 Julie (pictured) revealed that although she was surprised by the gesture, it’s not the first time that Mark has shown his affection 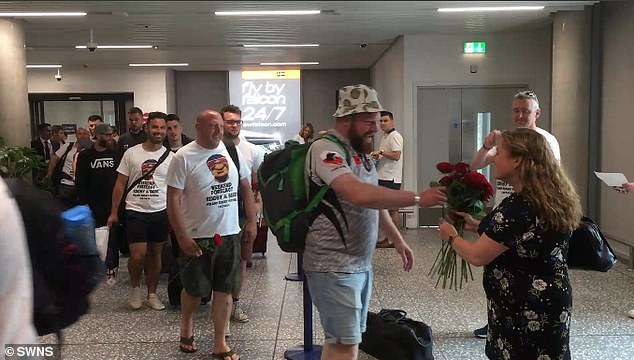