Woman asks if she was wrong to wear her colourful £1,750 D&G wedding dress to her fiancée’s funeral to honour her final wish – after her late partner’s parents asked her not to turn up in the ‘inappropriate’ gown

A lesbian woman has asked if she was in the wrong to wear her brightly-coloured wedding dress to her fiancée’s funeral to honour her final wish.

Taking Reddit to for advice, the anonymous woman, 24, believed to be from the UK, said her fiancée, 27, passed away unexpectedly but before she died, she had requested to be buried in her wedding dress.

Her dying fiancée also requested that her partner wear her own wedding dress to the funeral, a £1,750 multicoloured midi-length Dolce & Gabbana dress, because they wouldn’t be able to get married.

However, after the death her parents, who were planning the funeral, refused to let their daughter’s fiancée wear her coloured wedding dress, saying it was ‘inappropriate’. 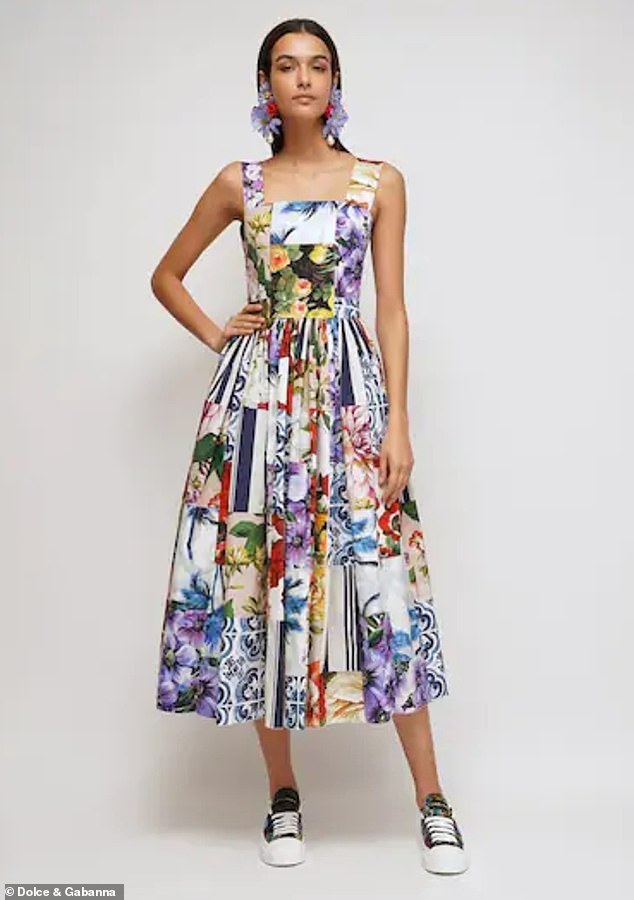 An anonymous woman posting on Reddit, believed to be from the UK revealed her late fiancée’s parents were very angry when she showed up in her Dolce & Gabbana wedding dress to her partner’s funeral

Explaining the situation, the woman wrote: ‘I recently lost my fianceé. It came totally out of left field.

‘Between the incident and her death, [she] told me that she wanted to be buried in her wedding dress and that it would mean a lot if I went in mine, too since we wouldn’t be able to get married.’

When the woman told her late partner’s family, they agreed her fianceé would be buried in her wedding dress.

‘But they said I couldn’t wear mine,’ she explained, sharing a picture of the D&G gown they found ‘inappropriate’.

‘I spoke with her sister and brothers about it (I’m quite close with them) and they said they would be on my side if I decided to show up in my wedding dress,’ she said.

Despite the parent’s disapproval, the woman showed up to her fiancée’s funeral in the wedding dress, causing a rift in the family, with the siblings taking the fiancée’s side. 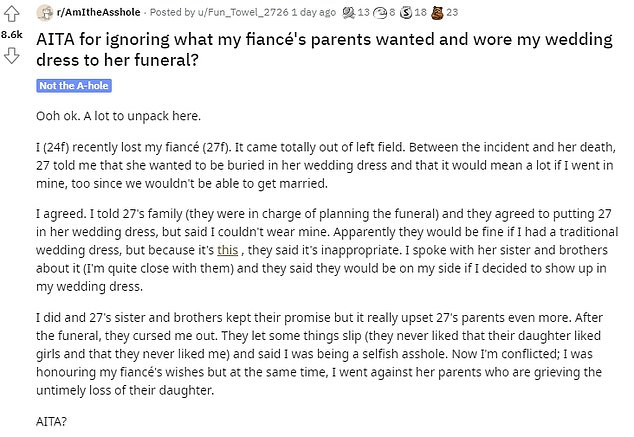 However, the woman, 24, insisted that she had already agreed with her partner that she would wear wedding dress to her funeral after she passed away unexpectedly aged 27 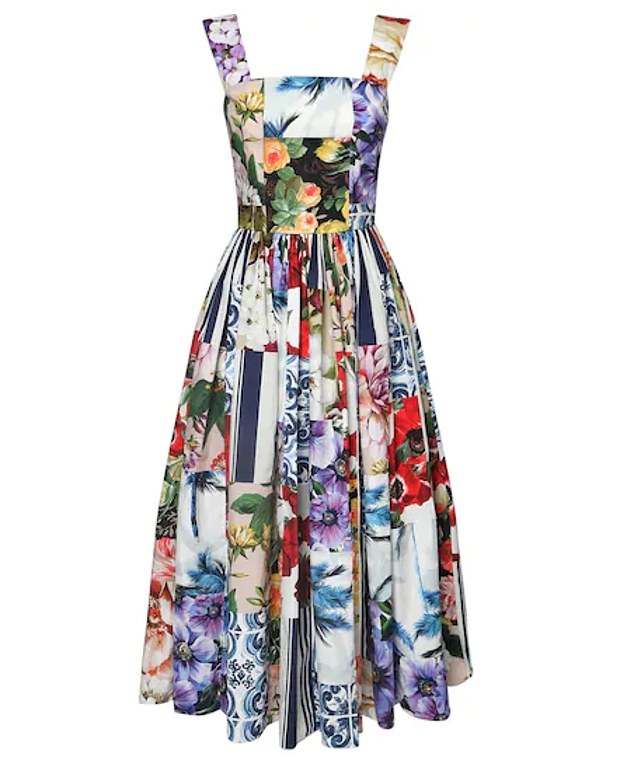 The incident has caused a rift in the family as the parents didn’t want their daughter’s fiancée to wear her brightly-coloured wedding dress, saying it was ‘inappropriate’ and branded her a ‘selfish a**hole’

The parents then revealed that they never liked that their daughter ‘liked girls’ and didn’t approve of her fiancée, branding her a ‘selfish a*****’.

She concluded her post by asking members of the forum for advice on her dilemma, wondering if she was in the wrong for ‘honouring her fiancée’s wishes’ while at the same time disrespecting her ‘grieving’ parents.

Social media users rushed to the comments to give her advice on the situation, with some calling the fiancée’s parents ‘homophobic’, saying they wanted to pretend their daughter ‘wasn’t a lesbian’.

Other social media users weighed in on the feud, slamming the late fiancée’s parents as ‘homophobic’, saying they wanted to pretend their daughter ‘wasn’t a lesbian’

Another Reddit user wrote: ‘[Not the a**hole.] You had agreed this with your fiancé and she wanted you to wear the dress (which is gorgeous by the way).

‘Sounds like her parents big issue is that they are homophobic and wanted to pretend that their daughter wasn’t a lesbian. They are a**holes here even excusing the fact they are grieving.’

Meanwhile, another person pointed out that grief can cause people to act strangely, writing: ‘you honored your fiancée’s wishes by wearing what SHE wanted you to wear.

‘I wouldn’t come down too hard on her parents though. Grief makes people act oddly. It effects everyone differently.’