Would YOU have a £500 liquid nose job? Millennials favour non-surgical 15-minute procedure using fillers as an alternative to going under the knife

Going under the knife is a daunting prospect, especially when it’s to operate on something as prominent as your nose.

For years the only procedure available to someone who wanted to change the size or shape of their nose was a rhinoplasty, or ‘nose job’ – a delicate, complex operation which can be costly and risky.

But a new non-surgical procedure is fast becoming an appealing alternative among millennials. 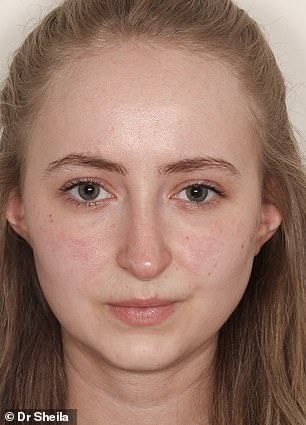 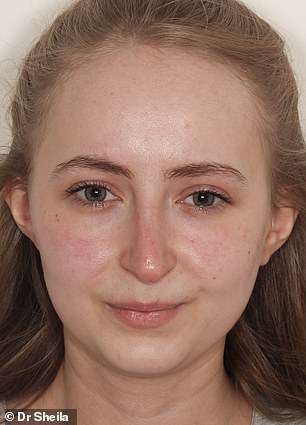 Madeleine Odelia, a 25-year-old media worker from Birmingham, decided to have a non-surgical ‘liquid nose job’ to correct the bump on her bridge. Pictured left before and right after

This way you bypass traditional invasive surgery and can save yourself up to £6,500 – though the results are not permanent.

Non-surgical nose jobs are usually priced between £500 and £700, making them much more cost effective than traditional rhinoplasty, plus there’s minimal recovery time and instant results.

Madeleine Odelia, a 25-year-old media worker from Birmingham, decided to give it a try, having been self-conscious of her nose for most of her life.

A hereditary trait passed down from her maternal grandfather and mother, Madeleine’s nose has a bump at the bridge, a curve at the tip and leans slightly to one side.

She suffered from low self-esteem for years, but discovered the liquid nose job (officially known as the non-surgical rhino) after witnessing the results on a social media influencer who had one. 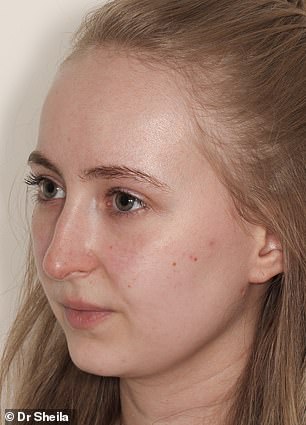 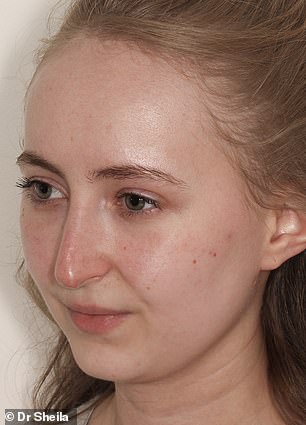 A hereditary trait passed down from her maternal grandfather and mother, Madeleine’s nose has a bump at the bridge, a curve at the tip and leans slightly to one side. Pictured before (left) and after (right) her liquid nose job

Madeleine told FEMAIL: ‘I avoided taking pictures with friends and family for years because I was so self-conscious of how my nose looked in pictures.

‘I even hated messing around on Snapchat and using filters because they never centered properly on my face.’

Although Madeleine considered having surgery, she couldn’t justify the cost.

The price of nose reshaping in the UK ranges from £4,500 to £7,000, plus the additional cost of any consultations, further surgery or follow-up care that may be needed. 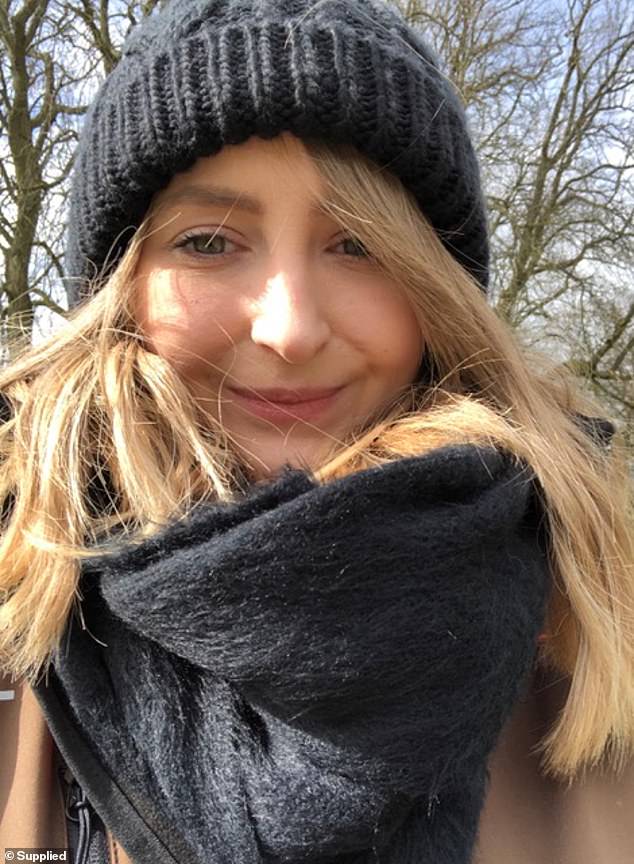 Madeleine, pictured in a rare selfie prior to her non-surgical procedure, avoided taking pictures with friends and family for years because she was so self-conscious of how her nose looked in pictures

‘Although I had never discussed it with my family, I had become intent on getting surgery to straighten my nose, and was more focused on saving for a procedure than saving for a house deposit,’ Madeleine admitted.

‘Because I never talked about it with anyone, nobody was aware of how much my nose bothered me or knew that it was the reason why I was so camera shy. I kept it all to myself.

What can non-surgical nose jobs do?

‘After witnessing how long it took my stepmother to recover from her nose job, in terms of both downtime and bruising, my dreams of a straighter nose were put on hold.

‘I couldn’t afford to take a long period of time off work and was scared of how painful it would be.’

Dr Sheila has clinics in London, Essex and Somerset and believes in natural looking results that are undetectable and balance and harmonise the face rather that give that ‘stiff’ or ‘done’ look.

Speaking about her non-surgical nose job, Madeleine said: ‘I was amazed at how quick and painless the treatment was.

‘A couple of years ago, I found out about the non-surgical nose job when I saw how a social media influencer had opted for this procedure over a proper nose job and had documented their experience. 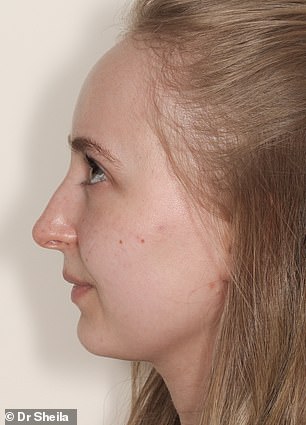 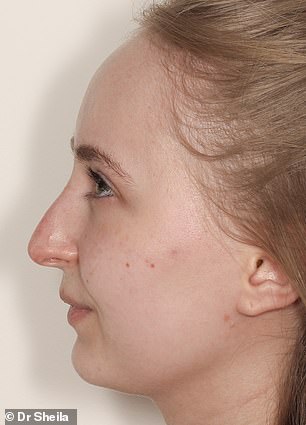 Madeleine, pictured before (left) and after (right) her liquid nose job, was concerned about the cost and pain factor of a traditional rhinoplasty

Dr Sheila, pictured with Madeliene, has clinics in London, Essex and Somerset and believes in natural looking results that are undetectable and balance and harmonise the face rather that give that ‘stiff’ or ‘done’ look

‘After this, I started following more and more social media accounts of doctors who offered the procedure, and the more I looked into it, the more I found that fillers were beginning to be increasingly used to straighten noses, which definitely confirmed that it was something I wanted to try.

‘It largely appealed to me because it meant zero downtime, no bandages and a less invasive procedure to get the similar results.

‘Nowadays fillers and smaller procedures such as this have become far more normal and I think there is now far less of a stigma around them, so when it came to telling my family and friends about my decision, I felt much more comfortable talking about it.

‘Although I believe that there’s no one perfect face or body and that we should all feel comfortable in the skin we’re in, I also believe that everyone will have that one thing that just niggles away at them.’ 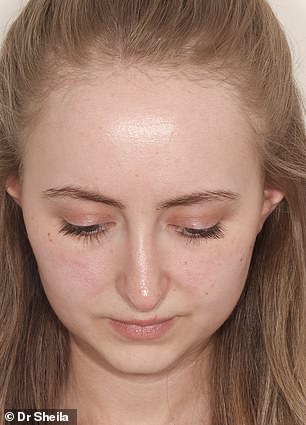 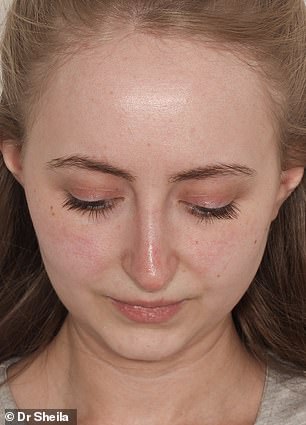 Speaking about her non-surgical nose job, Madeleine said: ‘I was amazed at how quick and painless the treatment was’. Pictured before (left) and after (right)

Dr Sheila told FEMAIL: ‘Madeline was unhappy about the appearance of her nose, she disliked the bump and wanted to soften it, but was worried about having treatment that would be too noticeable.’

How do non-surgical nose jobs work?

After cleansing and disinfecting the nose, Dr Sheila used a topical anaesthetic to numb the skin.

‘I used a high density hyaluronic acid dermal filler to correct the bump in the nose at specific points, checking to make sure it was even, subtle and most importantly, in keeping with the rest of her features,’ she explained.

‘The goal was a minor tweak to correct the bump.’

Only tiny amounts of filler was needed, and results can last up to 18 months. Often some patients will require a second appointment for further refinements.

‘It’s easier to add, so less is more in the first appointment,’ Dr Sheila said. ‘In experienced hands, risks are minimised. This is a high risk area, and should only be performed by an experienced practitioner.

‘Risks such as blindness, tissue necrosis and infection are minimised.’

A growing trend among millennials

According to Dr Zoya Diwan and Dr Sanjay Trikha, founders of TRIKWAN Aesthetics, liquid nose jobs are on the rise.

‘At our clinic we are seeing an increase in filler alternatives,’ said Dr Trika.

‘For example, with noses hyaluronic acid fillers can be used to straighten dorsal humps, create a bridge for more flat noses and raise a drooping tip.

‘Likewise, for chins and jawlines, fillers can be used to enhance a chin in terms of length, projection and width as well as enhance the jawline angle.

‘Botox can also be used to effectively slim down a jaw.’

There was a 40 per cent reduction in the number of surgical nose jobs in 2015 due to the non-surgical option.

‘Whilst not permanent, these are an excellent alternative as they are long lasting – up to two years – and reversible,’ Dr Diwan added.