A great loss for Australian television and a great relief for dodgy tradies, politicians and disgraced celebrities: Tracy Grimshaw is stepping down as host of A Current Affair (ACA).

The 62-year-old broadcaster announced the news during Monday’s show, saying that, at the end of the day, she’s “just a bit tired”. And, looking back at her work over the past four decades, it’s easy to see why.

After more than 40 years at Channel Nine, including 17 years in the top job at A Current Affair, Grimshaw has long been one of the most recognisable and respected interviewers in the country – capable of both incredible empathy and excoriation when required.

From Scott Morrison to Don Burke, she’s held her fair share of people’s feet to the fire over the years, but she’s also created space for ordinary people with extraordinary stories. Here are a few of her greatest hits.

Grimshaw was just a few months into the job when she first made her mark. Her exclusive 2006 interview with Brant Webb and Todd Russell, the two men who survived the Beaconsfield mine collapse, captivated the nation with more than 3 million viewers tuning in to the broadcast at its peak.

At times in tears and song, Webb and Russell recounted their story of survival after waiting to be rescued for two weeks while underground.

“Both those blokes know that if they’d been there on their own, they probably wouldn’t have come out,” Grimshaw said, recounting the interview later that year. “They know, in a sense, that they owe their lives to the other.

“These were not just two men down there; they were two men and two fathers.”

A few years later, in 2009, Grimshaw picked up her first Walkley Award. This was for her revelatory interviews with swimmers Simon Cowley and Nick D’Arcy, after the latter had assaulted the former in a Sydney bar. But it was also in recognition of a bombshell interview with former NRL player Matthew Johns, in relation to allegations of group sex. 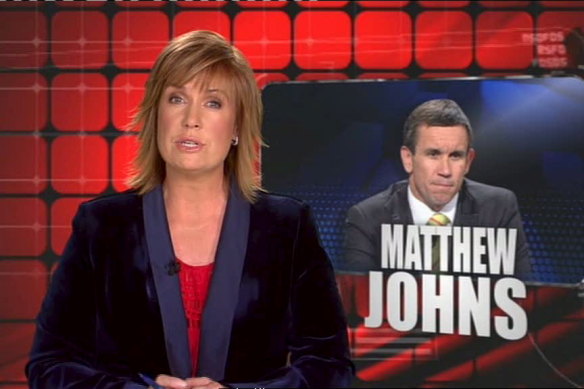 Tracy Grimshaw won a Walkley Award in 2009 for her work on A Current Affair.

Grimshaw was under a lot of pressure. The interview followed a Four Corners investigation that had everyone in the country talking about sex, power, consent and the behaviour of sports players more generally. And it also came after Johns was stood down from his work on their shared network (he reportedly reluctantly agreed to the interview after being asked by the Nine boss at the time). Then there was the added time pressure: the interview apparently took place at 4pm, and went to air at 6.30pm.

“When Matthew Johns sat down to talk to Tracy Grimshaw, we all sat down,” the Walkley judges said. “It was compelling television as we watched a man’s career crumble. A tense and difficult interview, with the reporter also under particular pressures but Grimshaw proved the expert interviewer.”

After a joint Fairfax/ABC investigation revealed extensive allegations of sexual harassment, indecent assault and bullying against TV legend Don Burke in 2017, it was Grimshaw who had the interview. She sat down with Burke for a broadcast that night, offering him a platform to address the complaints (he admitted to bullying, but denied claims he was a sexual predator) and explain himself to the nation.

It was in that interview that Burke said he had been self-diagnosed with Asperger’s syndrome, and called the allegations a “witch hunt” – neither of which went down well with the public, and faced direct challenges from Grimshaw too.

On the night, veteran radio presenter Neil Mitchell praised the interview as a “cross-examination”. And, reflecting on it later on, she told The Australian she felt it was her responsibility to look for clear evasions: “You keep plugging away until you get somewhere near the truth”.

Most recently, Grimshaw has made headlines for her frank conversations with Scott Morrison. In 2021, as the prime minister evaded public view, Grimshaw secured a full sit-down interview covering everything from Christian Porter to the March 4 Justice to the question of what he’s been doing through the mounting controversies under his government.

Another example of this came in May, just days before the federal election.

“You said at your launch on Sunday, ‘you saved the country’,” Grimshaw said, addressing Morrison via screen.

“You don’t hold a hose. You weren’t in a tinnie plucking people off rooftops. You weren’t doing 16-hour days in COVID wards. You didn’t get enough vaccines soon enough. You didn’t get enough RATs so that we could finally have a holiday interstate for Christmas. And China has set up base in the Solomons. Do you think maybe you slightly over-egged the part about ‘I saved the country’?”