Two drunk passengers were arrested at Miami International Airport after starting a fight with a gate agent over one of the passenger’s footwear – or lack thereof.

California couple, Brittney Mohammadi, 23, and Manuel Arteaga, 26, were attempting to board a flight for Los Angeles Sunday night at the Florida airport when an American Airlines gate agent reportedly told the woman she could not get on the flight without shoes.

“We went through TSA, we had everything checked out, they didn’t realize she didn’t have her shoes,” said Arteaga in an interview with Fox-affiliate WSVN.

The rejection seemed to set Mohammadi off. According to footage from the counter, the woman is seen attempting to jump over it while yelling.

The gate agent told police the woman had jumped over the counter in an attempt to strike the employee, WSVN reported.

Arteaga pulled his girlfriend off and the pair went outside. Police were called to the scene where they reported that the two were drunk and unruly. Arteaga confirmed the pair had been drinking.

To WSVN, Mohammadi defended the reason she wasn’t wearing shoes as “OK, you know what? I don’t go on the airport that often.”

Arteaga said the two “take 100% responsibility” for escalating the situation by jumping on the counter, but claims they were both treated roughly during the arrest. 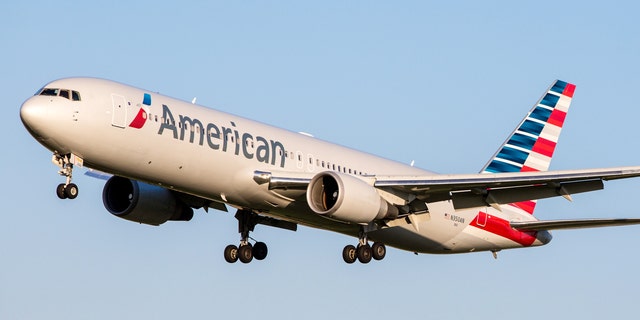 The woman passenger allegedly attempted to strike the American Airlines employee for refusing her entry to the plane.
(iStock)

In a statement to Fox News from American Airlines, the airline confirmed the customers were denied boarding because Mohammadi was not wearing shoes.

“After being informed of our policy, the customers became irate and one attempted to strike an American team member at the gate. Law enforcement was requested, and since this is a law enforcement matter we would refer additional questions to the Miami-Dade Police Department,” the statement read.

“Violence of any kind is not tolerated by American Airlines. We thank the Miami-Dade Police Department for their quick action to ensure the safety of our customers and team members.”

According to an Instagram video from Mohammadi, the pair seemed to have gotten another flight to California via Spirit Airlines.