Your ticket to ride somewhere… spectacular! Europe’s best scenic railways revealed by Which? – with a magical Welsh train journey ranking No.1

The Ffestiniog Railway, which cuts through the countryside in Wales, is Europe’s No.1 scenic train line.

It tops a new ranking by Which? of Europe’s ’10 best scenic railways’, generated from a survey of more than 1,400 travellers, who were asked to rate their favourite scenic journeys across the continent, scoring them in seven categories – scenery, comfort, onboard facilities, cleanliness, food and drink on board, customer service, and value for money.

Second place in the list is shared jointly by Norway’s Bergen Railway and the Bernina Express, which weaves from Switzerland to Italy, with Switzerland’s Glacier Express taking the bronze medal. Commenting on the study’s findings, Which? says: ‘[The] top 10 unique train rides all [have] one thing in common – the magic of the scenery outside.’ Scroll down for stunning pictures of the 10 railways that make the cut. 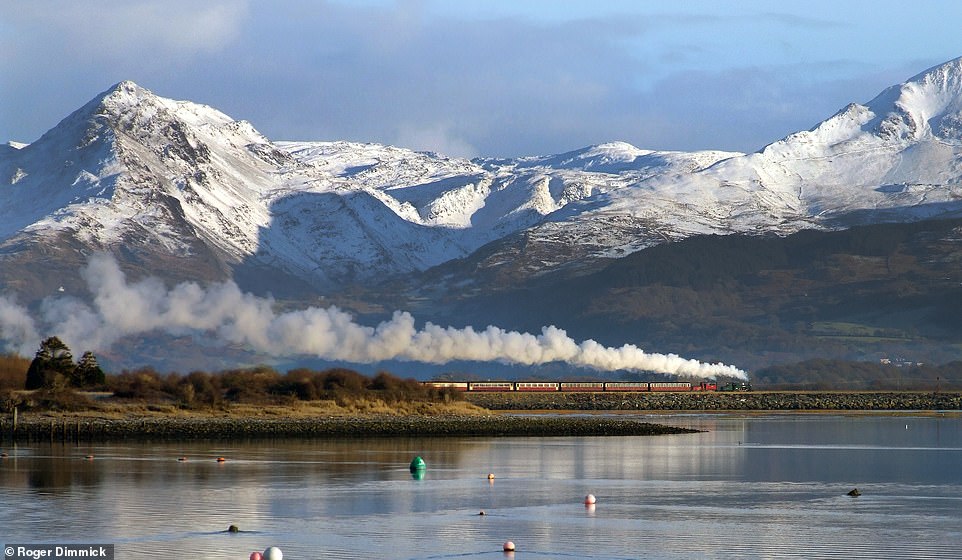 The Ffestiniog Railway in Wales is Europe’s best scenic railway, a new survey by Which? declares. Above, the Blanche and Prince train crosses The Cob, a causeway that leads to the coastal town of Porthmadog 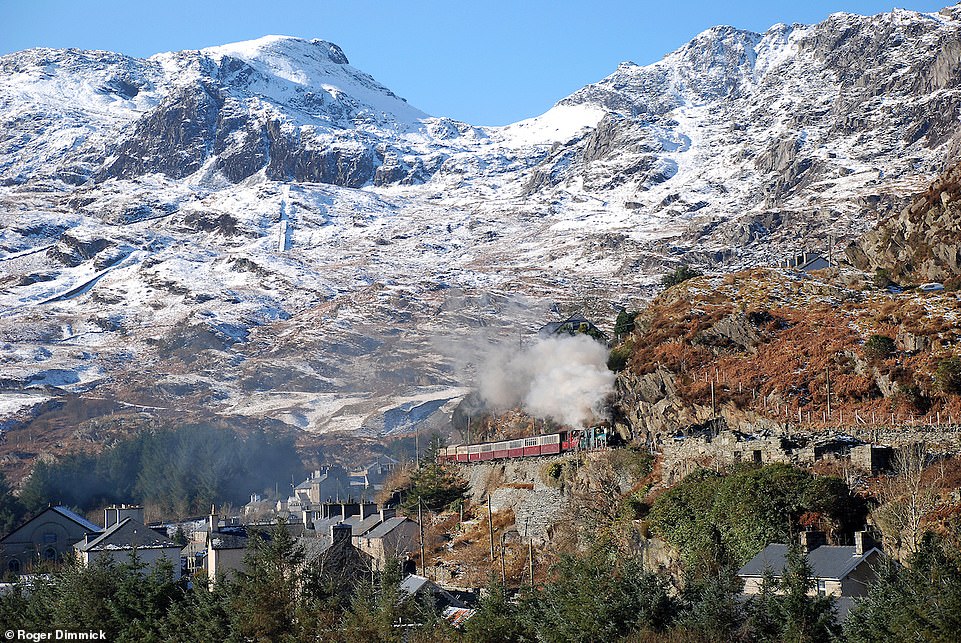 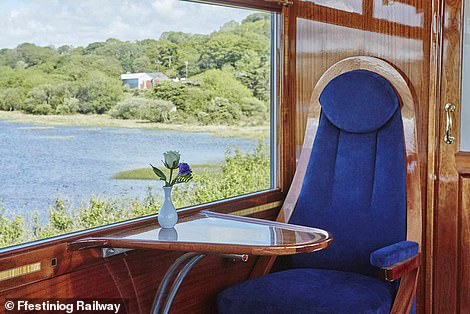 A First Class Pullman carriage on the Ffestiniog Railway

Reigning supreme with an overall score of 91 per cent, the Ffestiniog Railway – the world’s oldest narrow-gauge railway – spans 13 and a half miles (21km) between the coastal town of Porthmadog and the slate mining town of Blaenau Ffestiniog.

‘With the option to travel in first-class Pullman carriages, you can push down windows, breathe in the sweet air and whizz through the Welsh countryside in just three hours – pulled by a whistling steam engine,’ Which? reveals.

It continues: ‘On a summer’s day, you’ll pass glistening lakes speckled with little egrets, before rattling along the precipice of bridges, often within arm’s reach of wild grass and the backs of stone houses.’

The watchdog adds that the train ‘offers a peek into the depths of dense forests’ before trundling over hamlets ‘where residents wave up from their farmhouses and chickens cluck in the yard’. Tickets for a trip on the Ffestiniog Railway are priced from £40 return. 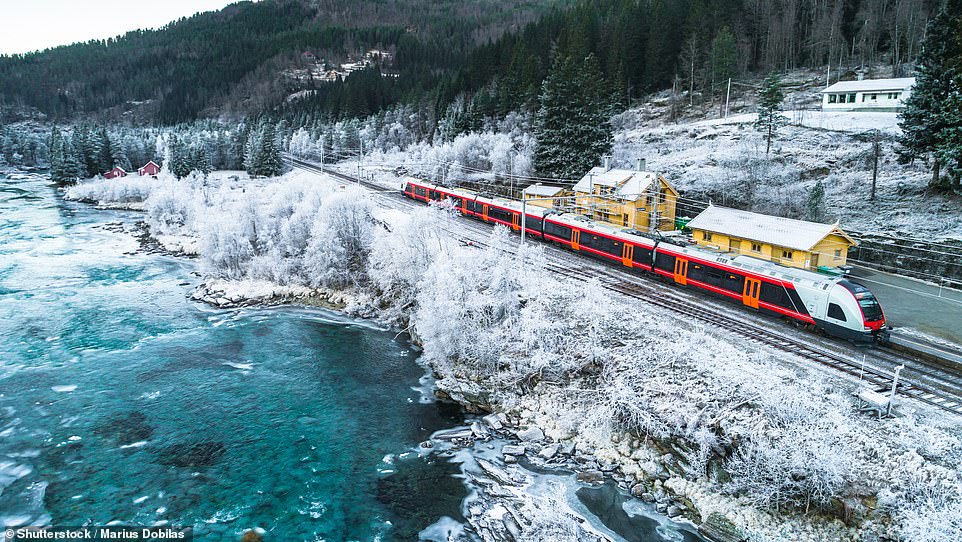 Take a trip on the Bergen Railway (pictured) in the wintertime and you can expect to see ‘armies of sugar-dusted spruce’ and cabins submerged in snow. The railway is joint second in the ranking

The joint silver medal winner, a railway that takes passengers from Oslo to Bergen in seven hours, earns an impressive five stars for comfort and cleanliness and has an overall score of 90 per cent.

Which? reveals: ‘Built between 1875 and 1909, the railway includes 308 miles (495km) of track that transport passengers past mirror-clear lakes with armies of sugar-dusted spruce circling their banks.’

It explains that the Bergen Railway ‘runs along the Drammenselva river – a popular spot for salmon fishing – and on to the pretty little town of Honefoss’, after which ‘buildings begin to thin out, with miles of empty landscape galloping in between each village’.

The campaign group notes that, come wintertime, cabins along the route are submerged in the snow with ‘single spirals of smoke betraying their hiding places’. Tickets for the Bergen Railway are priced from £20 one way. 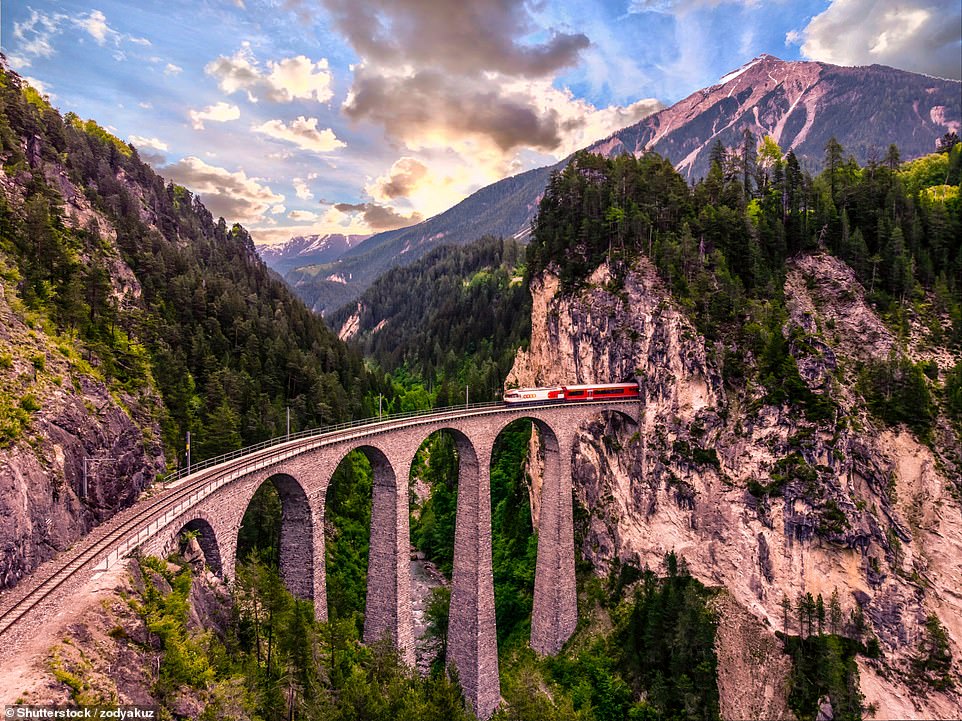 Which? says that the Bernina Express, which is joint second, offers a ‘four-hour Alpine adventure’. Above, a Bernina Express train glides over the Landwasser Viaduct

The Bernina Express, which is one of the highest railways in Europe, is the only railway in the ranking to score a remarkable five stars for scenery. Scooping up more five-star gongs for comfort, onboard facilities and cleanliness, the railway ties for second place with a score of 90 per cent.

Which? says that the 90-mile- (144km) long railway whisks passengers on a ‘four-hour Alpine adventure from within the cosy confines of a shiny, red, panoramic dome car’. ‘During winter, expect to curl around frozen lakes and monstrous snowdrifts, while in summer, you’ll see bell-wearing cows picking their way through meadows of lilac asters overlooked by snow-capped peaks,’ it says.

The watchdog notes that there are ‘hair-raising’ moments en route, such as when the ‘train squeezes on to bridges anchored in rock faces, while green rivers churn and swirl below’.

Hoping to make the journey? Which? recommends keeping your camera to hand and bringing a packed lunch, as there’s currently only a minibar service on board. Tickets on the Bernina Express are priced from £54 one way. 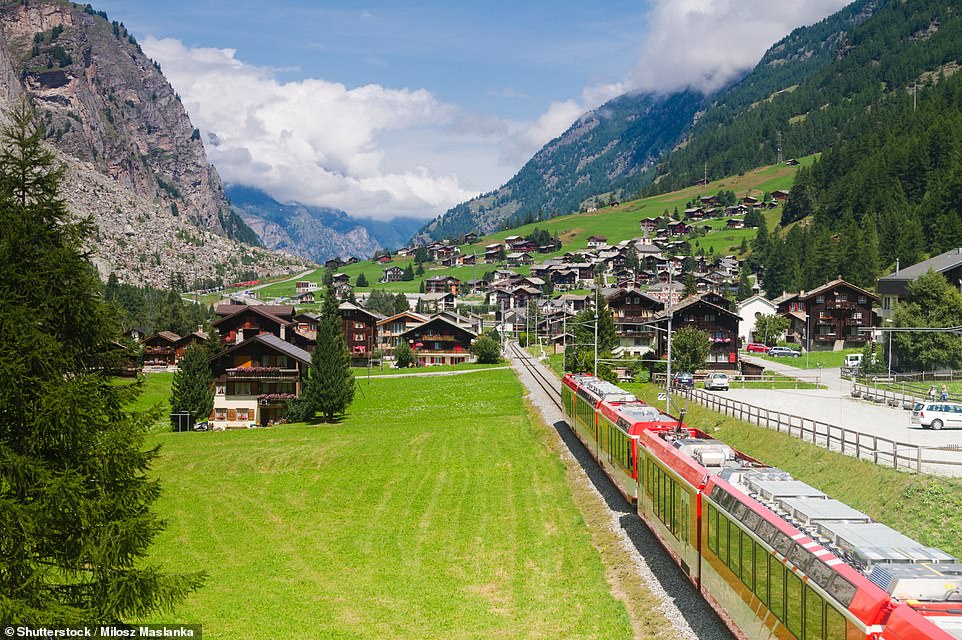 A trip on the third-place Glacier Express (above) ‘allows passengers to look inside clusters of chalets, their balconies bright with flowers’

Which? says: ‘[The] top 10 unique train rides all [have] one thing in common – the magic of the scenery outside’

According to Which?, a trip on the Glacier Express is ‘the most luxurious way to see the Swiss Alps’, as the trains boast ‘wide leather seats and a new Excellence Class that offers a seven-course menu with wine pairing’.

It says: ‘Soon after departure, the majestic, ice-slicked Matterhorn looms into view with wisps of cloud-like steam around its head and its reflection in the lake below. Meandering through the three cantons of Valais, Uri and Graubunden, the train allows passengers to look inside clusters of chalets, their balconies bright with flowers.’

Which? notes that a highlight of the journey, which takes seven and a half hours and spans 180 miles (290km), is when passengers get a glimpse of the ‘apple-green waters’ of the Rhine Gorge from the train’s vantage point on ‘vertiginous viaducts’.

The railway, which earns the bronze medal in the ranking with a score of 89 per cent, bags five stars for comfort, onboard facilities, cleanliness and customer service. Tickets on the Glacier Express are priced from £130 one way. 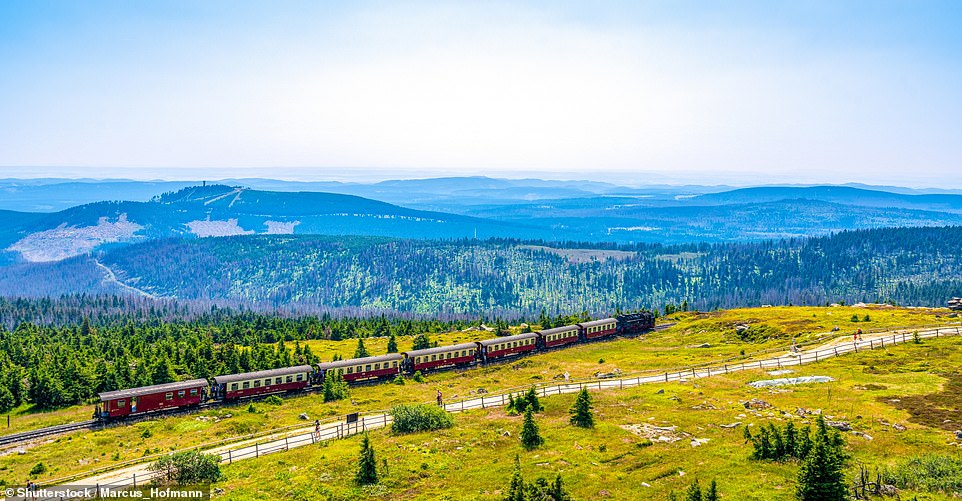 Pictured is the Brocken Railway, which ranks joint fourth, heading towards the top of the Brocken peak in Germany

‘One of the few remaining steam railways used by both commuters and tourists, the Brocken Railway is a branch of Germany’s Harz Narrow Gauge Railway network, carrying passengers to the summit of the Brocken mountain [1,142m/3,746ft] – once a major Soviet-era spy station,’ Which? says of this railway.

The 11-mile- (19km) long railway, which scores 86 per cent overall, ‘rolls out of the town of Wernigerode, running parallel to little streets lined with yellow half-timbered houses with steep red roofs’ before trundling uphill through a ‘dense woody landscape’.

The trip to the top of Brocken takes just 50 minutes, with Which? noting: ‘If there’s no mist swirling at the summit, expect a spectacular panoramic view of [Harz National Park] in all its glory.’ Tickets on the Brocken Railway are priced from £40 return. 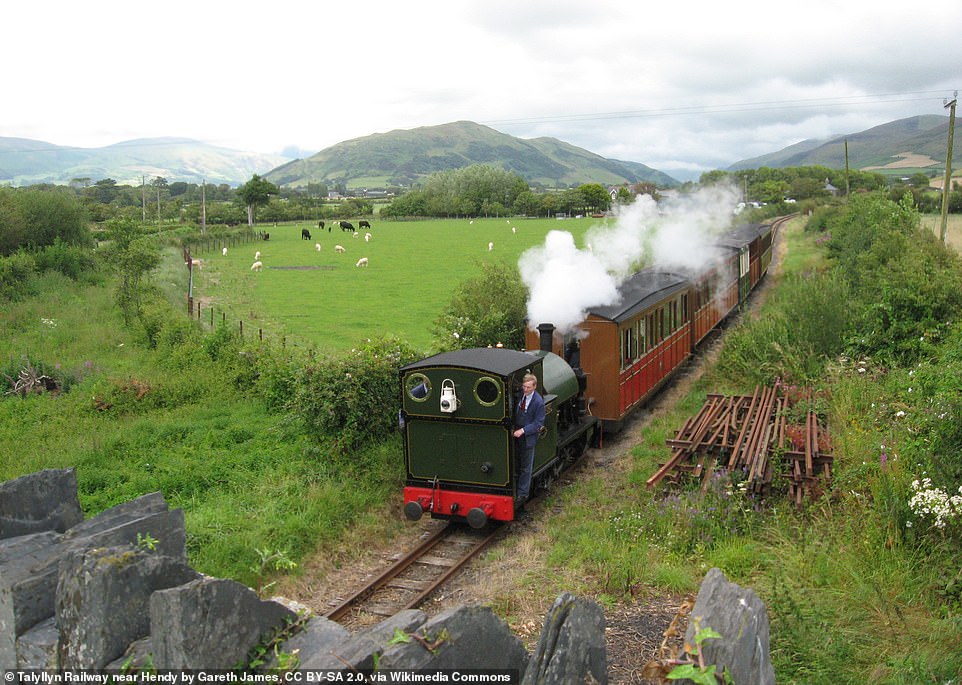 The Talyllyn Railway, shown above near the Welsh village of Hendy, is the first preserved railway in the world. Picture courtesy of Creative Commons

The Talyllyn Railway earns five stars for customer service, and four stars for comfort, cleanliness and value for money, Which? reveals. Overall, it scores 86 per cent.

On the 55-minute-long railway journey travellers are ferried from the town of Tywyn, on the edge of the Snowdonia National Park, to Nant Gwernol railway station, which is nestled in the mountains above the village of Abergynolwyn.

The railway, which covers more than seven miles (11km), has a claim to fame as the first preserved railway in the world – it originally opened in 1865 and was reopened as a heritage railway in 1951.

Tickets for a trip on the Talyllyn Railway are priced from £22 for a return trip. 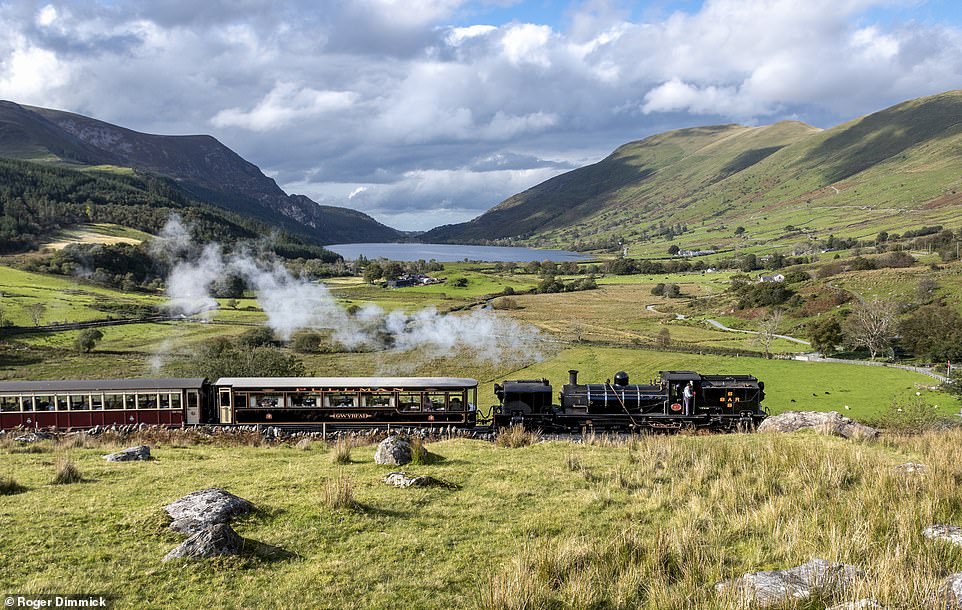 Pictured above is the ‘No 87’ train on the Welsh Highland Railway, which ties for fourth place in the Which? ranking

The Welsh Highland Railway, the UK’s longest heritage railway, ties for fourth place in the Which? ranking.

Over around six hours (return, with breaks), the railway’s steam locomotives carry passengers 25 miles (40km) from the royal town of Caernarfon, known for the magnificent Caernarfon Castle, to the pretty coastal town of Porthmadog.

Along the way, the train rolls up to the foothills of Snowdon, down to the quaint village of Beddgelert, and then through the awe-inspiring Aberglaslyn Pass.

Treat yourself and splash out on a ticket for the Pullman First Class Carriage. Tickets for The Welsh Highland Railway are available from www.festrail.co.uk. 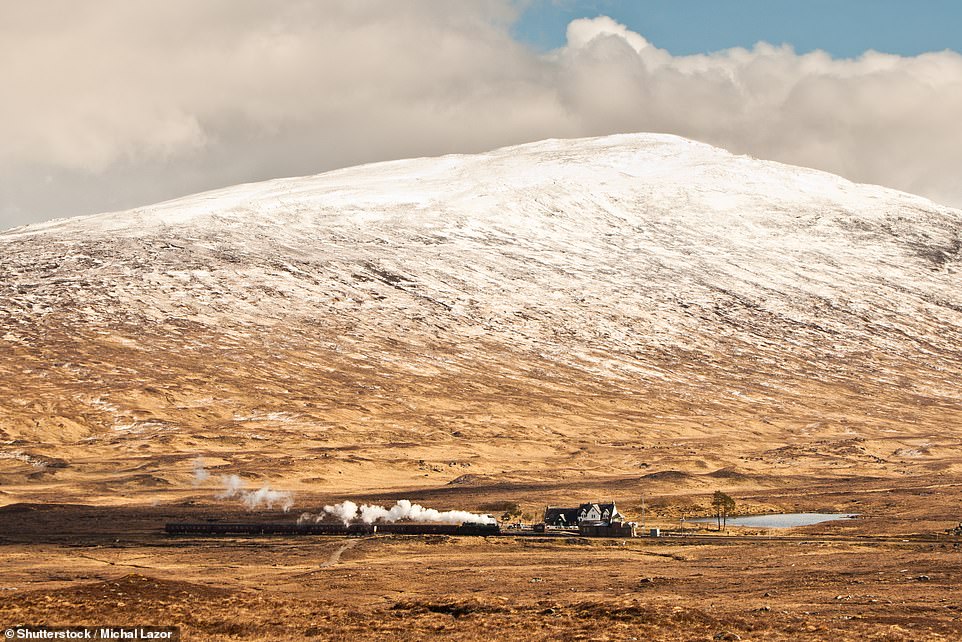 The West Highland Line arriving at tiny Corrour station on the route between Glasgow and Mallaig. The railway ties for fourth place in the ranking

Passengers board the West Highland Line in Glasgow and set off on a voyage to the west, all the way to the port town of Mallaig in the Highlands. The 164-mile- (264km) long railway ranks joint fourth with a score of 86 per cent, bagging four stars for scenery.

It famously crosses over the Glenfinnan Viaduct over the waters of Loch Shiel, the same route taken by the Hogwarts Express in the Harry Potter films.

Other scenic highlights on the five-and-a-half-hour journey include the hills and woodlands of Loch Lomond and The Trossachs National Park, the peaty moorland of Rannoch Moor and a view of Ben Nevis, Britain’s highest peak. Tickets on the West Highland Line are priced from £38. 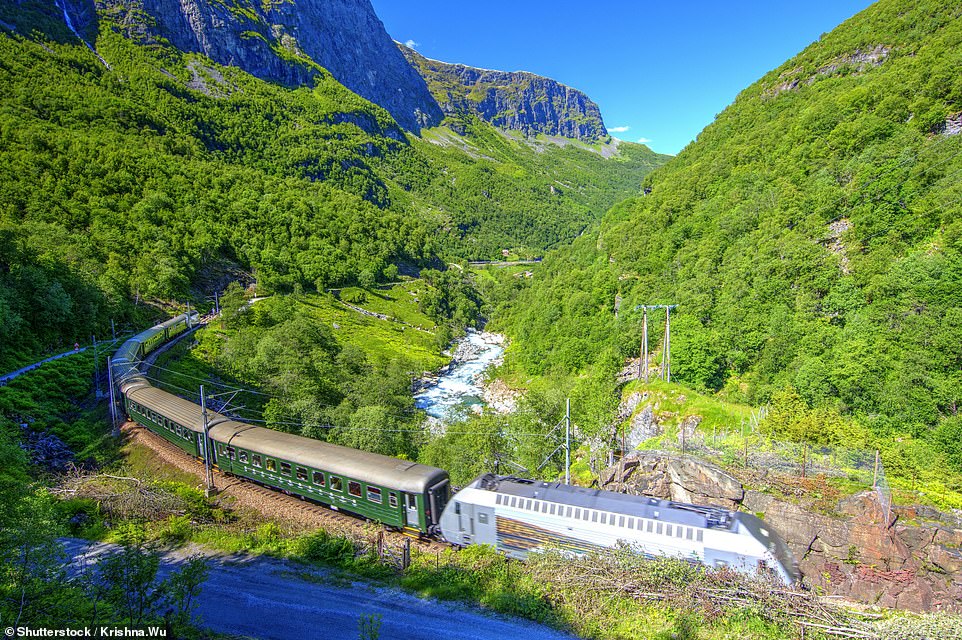 Norway’s Flam Railway (above) – which is joint fifth in the ranking – takes passengers on a scenic two-hour journey through Flam Valley, from the fjord of Aurlandsfjord up to Myrdal station

With a score of 85 per cent, Norway’s Flam Railway glides into joint fifth place in the Which? ranking.

The 12-mile- (20km) long railway weaves through a grand total of 20 tunnels on its route from the fjord of Aurlandsfjord up to Myrdal mountain station in Aurland.

Travellers take a seat in a vintage train compartment before heading on a scenic two-hour journey through Flam Valley, trundling past the old Flam village centre. Make sure to bring your camera – it stops briefly along the way at the stunning Kjosfossen waterfall so passengers can take a holiday snapshot, Which? reveals. 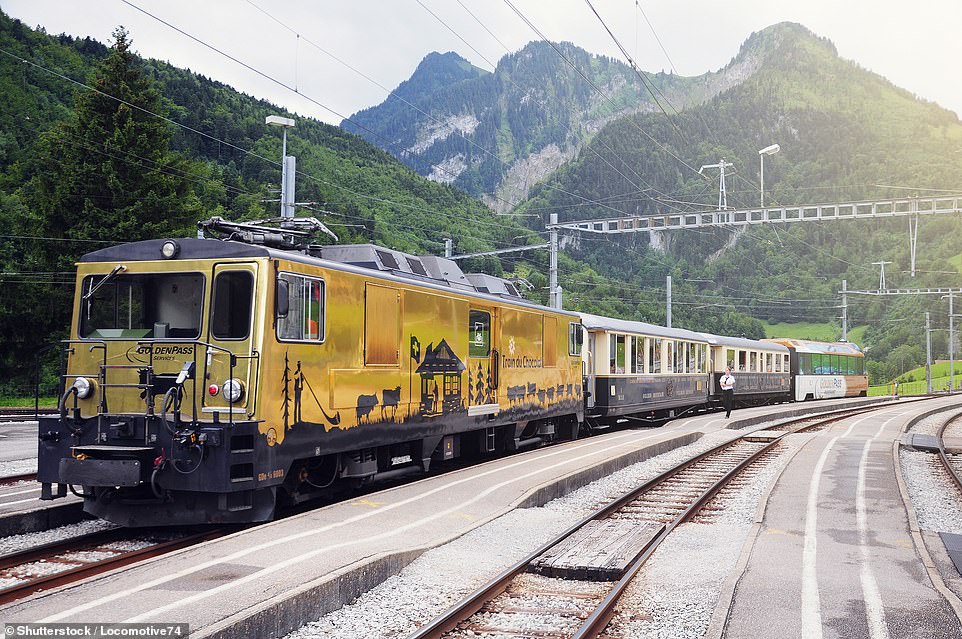 A GoldenPass Line train sitting at the station in the village of Montbovon. The Swiss railway finishes joint fifth in the list

This 118-mile- (191km) long railway, which ties for fifth place, earns a commendable score of 85 per cent, with five stars for comfort, onboard facilities and cleanliness, Which? reveals.

It carries passengers from the city of Lucerne to the resort town of Montreux on Lake Geneva, with two changes along the way at Interlaken and the quaint village of Zweisimmen.

During the five-and-a-half-hour journey, passengers can expect to see spectacular sights such as the 3,307ft- (1,008m) high Brunig Pass, the sparkling lakes of the Bernese Oberland, the picturesque Simmen valley and the swish ski resort of Gstaad. For tickets for the GoldenPass Line, visit www.goldenpassline.ch.

For more on the ranking, go to www.which.co.uk.