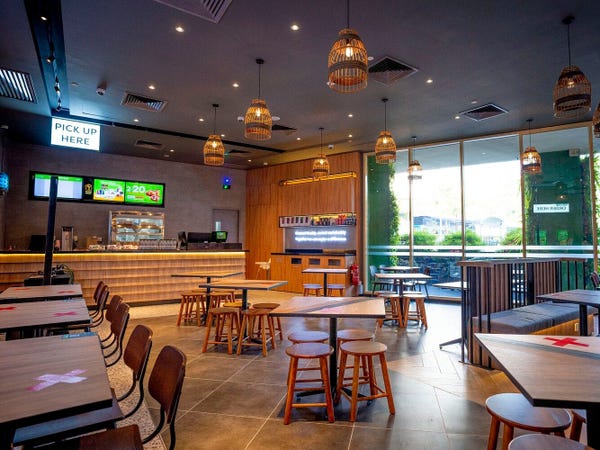 Lots of people are missing the ability to travel freely during the coronavirus pandemic.

For some, it's about the destination, the chance to explore somewhere new and learn about different cultures. For others, it's the traveling experience in itself.

And in good news for the latter group, AirAsia is rolling out restaurants serving its in-flight meals across the world.

As Insider's Sophie-Claire Hoeller reported, around 30% of the menu is the same as what's served on board a flight.

And the airline has now announced that it is planning a massive expansion of the chain not only across Malaysia but the rest of the world too.

According to the press release, Santan's business has "thrived" in the current climate, with people missing the chance to eat plane food.

Santan is a casual and fast restaurant serving a menu of Malaysian dishes including Pak Nasser's Nasi Lemak with Chicken Rendang and Nasi Padang with Beef Rendang, and drinks such as Teh Tarik and Calamansi Iced Tea.

There are currently 15 Santan stores in Malaysia, but the company hopes to expand this to 100 globally by the first quarter of 2022, according to the Malay Mail.

China and the UK are the first countries set to be targeted, with stores planned for opening in 2021.

AirAsia was the first airline to offer in-flight food on the ground, but it's an idea that's gained traction during the coronavirus pandemic.

Singapore Airlines recently turned a parked A380 superjumbo jet into a restaurant so people can experience in-flight dining on the ground.

And if that wasn't enough, the airline has also launched [email protected], which allows people to recreate the in-flight dining experience in their own dining rooms and kitchens.