Amusement parks love to brag. Somehow, every new roller coaster is the biggest! The tallest! The super-duper loopiest! In a bid to get customers through their turnstiles, parks roll out the superlatives and hope that folks don’t pay too much attention to the hyperbolic qualifications.

A few years back, Ohio’s Cedar Point and California’s Six Flags Magic Mountain battled for bragging rights as the park with the most coasters in the world. Among the points they debated during their heated battle: whether certain thrill rides met the definition of a roller coaster, whether a ride counted if it wasn’t currently operating and whether twin-track coasters counted as one or two rides.

Eventually, Magic Mountain pulled ahead decisively, ending the Great Coaster War. (When the Six Flags park opens West Coast Racers later this year, the reigning world champ will be able to brag that it is now home to 19 roller coasters.)

But while the two U.S. parks were busy bickering, Canada’s Wonderland was busy building a bunch of new rollercoasters. And in an unassuming and civil manner befitting our neighbors to the north, the Toronto-area park quietly took its rightful place on coasterdom’s world stage.

This spring, Canada’s Wonderland opened its 17th coaster, Yukon Striker, which ties the park with Cedar Point for silver medal and the home of the world’s second-biggest collection of roller coasters on the planet.

Such an overloaded arsenal poses an interesting challenge: What would it be like to tackle all of the thrill machines at Canada’s Wonderland in one day? And I’m here to tell you, it’s pretty wonderful.

First: the fine print. I only got to 12 of the 17 rides but I have legitimate excuses for those five. The first, Taxi Jam, is a small kiddie coaster that goes around a small oval. Adults aren’t even supposed to board it unless they are accompanied by a kiddo. A glitch took a second offline before I could get to it and the remaining three were still being coaxed from their winter slumber. But the 12 I did ride tested my mettle.

Bolliger & Mabillard, a Swiss firm renowned for its precision engineering and exceptionally smooth coasters, designed and built all three of the the headlining rides at Canada’s Wonderland: Leviathan, Behemoth, and Yukon Striker. All three are testaments to that reputation. 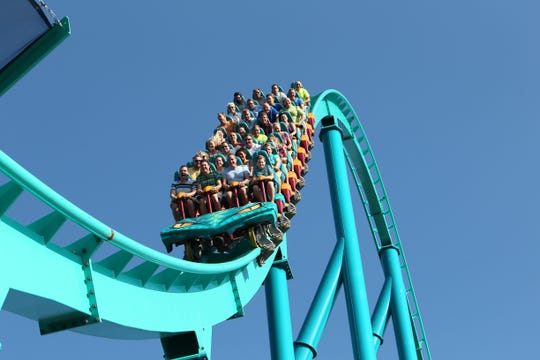 Clocking in at a face-melting 92 miles per hour, Leviathan is the ninth fastest roller coaster on the planet. (Photo: Cedar Fair Entertainment Company)

Rising 306 feet and winding its away across a huge swath of the park, Leviathan dominates the park’s skyline. The monstrous ride drops over 300 feet (the sixth-biggest on the planet) at a precarious 80 degrees and clocks in at a face-melting 92 miles per hour, making it the ninth fastest in the world).

Wild and intense doesn’t begin to describe the experience. It features some glorious, sustained floating airtime, the negative-G sensation that coaster fans crave. Leviathan was among the best coasters I have experienced anywhere.

At 230 feet and with a top speed of 77 mph, Behemoth ranks just below Leviathan on the thrill-o-meter. But it is still a potent hypercoaster.

Like its sister B&M ride, it eschews body-flipping inversions in favor of maximum speed and airtime, delivering on both counts. Behemoth is loaded with airtime-inducing camelback hills. My only gripe: there’s not quite enough airtime. 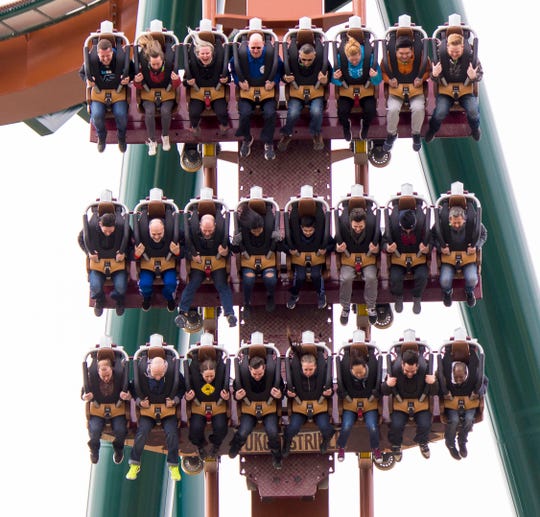 The new Yukon Striker accomplishes three superlatives in one go: It’s the world’s tallest, fastest, and longest dive coaster. And its name is good enough for a fourth: most Canadian-sounding roller coaster name, ever.

Yukon Striker sends passengers just over the precipice of a 90-degree drop and leaves them hanging there for a few knee-knocking moments. It then dives 245 feet straight down into an underwater tunnel, hitting 80 mph. That’s followed by four acrobatic inversions, which were especially dicey when experienced in one of its floorless cars. It is a stunning addition to the park’s ride lineup.

A terrain coaster, Vortex's track mostly hugs the ground. It's especially fun to swing to and fro along the ridges of Wonder Mountain. (Photo: Cedar Fair Entertainment Company)

Vortex is one of the few remaining suspended coasters of its type. And for a nearly 30-year old ride, it’s still quite smooth. The cars, which hang suspended below the track, swing left and right as Vortex navigates its course. A terrain coaster, the train mostly hugs the ground. It’s especially fun to swing to and fro along the ridges of Wonder Mountain.

There are three coasters that wind their way into and around Wonder Mountain, the signature Rockies-like peak that greets guests near the entrance of the park.

One of them, Wonder Mountain’s Guardian, was not operating on the day that I visited. But it’s really less of a coaster and more of an interactive 3-D dark ride in which riders try to rack up points.

One of the original rides at Canada’s Wonderland, Thunder Run is a family mine train coaster that foregoes a lift hill and uses an electric motor to rev up to a modest 40 mph. It spends most of its time in the darkened interior of Wonder Mountain, encountering an illuminated dragon, strobe lights, and other effects. Because the track is so short, it makes two runs around its course.

The Mighty Canadian Minebuster, which has been around since Canada’s Wonderland opened in 1981, is a typical wooden roller coaster. Its rough-and-tumble ride includes a few moments that will have you thinking it’s more of a spinebuster than a minebuster. While it includes a nice helix in a tunnel near its finale, unfortunately, the 38-year-old coaster is lacking in airtime.

The wooden Ghoster Coaster dates back to the park’s opening in 1981. (Photo: Cedar Fair Entertainment Company)

Like the Minebuster, Ghoster Coaster is also wooden and dates back to the park’s opening, but with a height of 41 feet and a top speed of 35 mph, it is tamer and smoother.  Thanks to its first drop, its thrilling enough for all riders without intimidating them. Bonus: Ghoster Coaster’s low height requirement (46 inches) makes it a great ride for children just starting to earn their coaster warrior stripes. 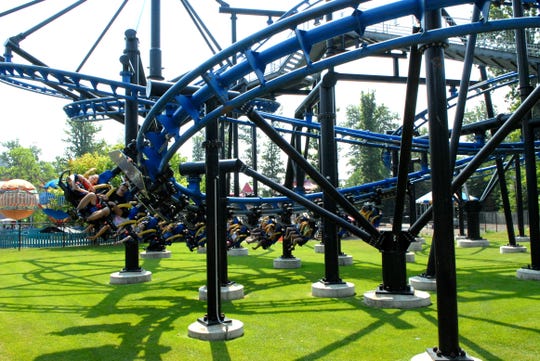 With a height requirement of 46 inches, Silver Streak is designed primarily for young children and their families. (Photo: Cedar Fair Entertainment Company)

With a top speed of 26 mph, Silver Streak is even tamer than Ghoster Coaster. The short ride took a little longer than a minute. With a height requirement of 46 inches, this coaster is designed primarily for young children and their families. 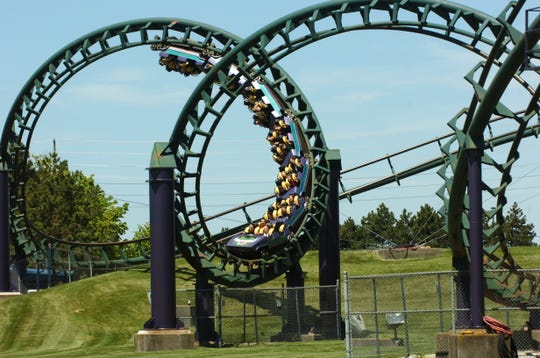 The lone steel coaster when Canada’s Wonderland first opened, the double looping and double corkscrewing Dragon Fyre has not aged well. The rough ride doesn’t deliver any airtime. Although the 78-foot-tall coaster probably looked imposing in 1981, it now looks puny compared to Leviathan, the giga coaster that towers directly above it. 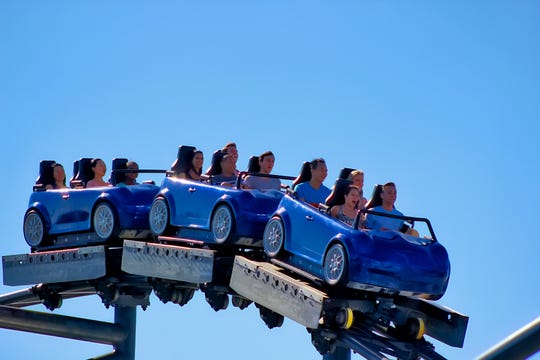 The train cars on Backlot Stunt Coaster, which dates back to the park's Paramount-owned era, resemble the Mini Coopers from the 2003 movie "The Italian Job." (Photo: Cedar Fair Entertainment Company)

Backlot Stunt Coaster grabs rider’s attention with an electromagnetic launch right out of the loading station. That gives it enough oomph to spiral up a triple helix.

Its name dates back to the period between 1993 and 2006 when the park was called Paramount Canada’s Wonderland and featured attractions linked to the studio’s movies. The coaster was originally known as Italian Job: Stunt Track, and it included explosions, fire, and other effects inspired by the 2003 Mark Wahlberg car-heist film. None of those effects were working during my ride but at least two more launches kept the action lively. 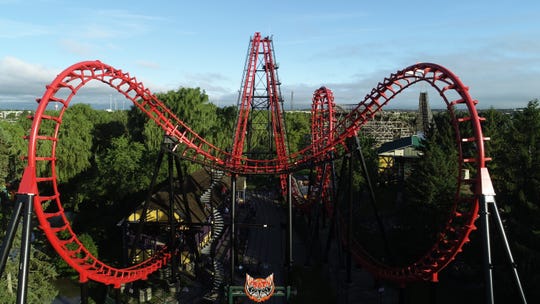 Nearly every major amusement park has a boomerang caster like The Bat. A catch car drags the train backwards up a lift hill, then releases it to fly though the station and into three inversions. The train then climbs a second lift hill and navigates the same three inversions in reverse.

Speaking of which, it’s an odd experience to ride facing backwards. For me, it was a bit rough, especially when my head ricocheted between the over-the-shoulder restraints. 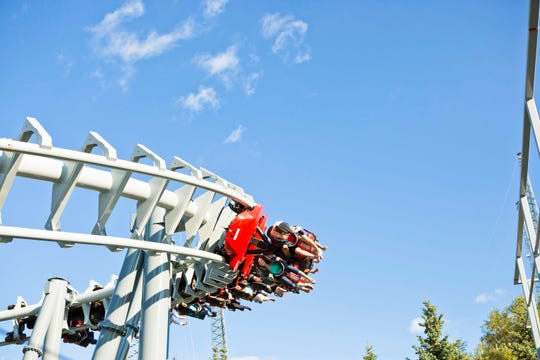 Like Vortex, Flight Deck's trains are suspended beneath the tracks, but its cars do not sway, and its floorless design leaves passengers’ legs dangling. (Photo: Cedar Fair Entertainment Company)

One reason why Canada’s Wonderland has been able to amass such a huge collection of coasters is because it has only removed one since it opened. Should the park decide to eliminate a second, I recommend the inverted coaster Flight Deck.

Like Vortex, Flight Deck’s trains are suspended beneath the tracks, but its cars do not sway, and its floorless design leaves passengers’ legs dangling. Maybe this ride should have been named The Bat. It uses the same kind of over-the-shoulder restraints, but its ride is  so rough it bats riders’ ears mercilessly.