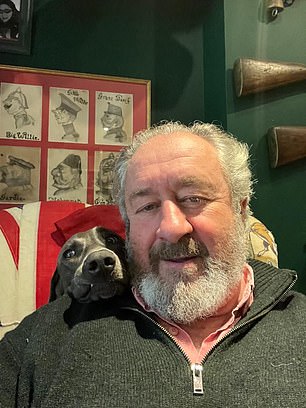 Kidnapped at knifepoint, held hostage by a gun-wielding madman and coming to the aid of a ranger who’d had his stomach ripped open by a buffalo.

These are some of the experiences a former SAS commander added to the itineraries of adventure holidays he took pampered rich teenagers on over a series of summers with a mate from the Special Boat Squadron (SBS).

Only – the kids didn’t know they were on the itinerary. And didn’t always find out afterwards that the terrifying scenarios had been faked.

The staged emergencies were created by Alex Gardiner, who served as an officer in the Royal Greenjackets, became a troop and squadron commander in the Special Air Service and went on to command 1st Regiment The Sultan’s Special Force in Southern Oman.

The other ‘tour guide’ for these trips, he said, was an ‘ex SBS chap, extraordinarily talented – a pilot, a freefall instructor, a sub-aqua instructor, a mountaineer, a medic and a crack shot… but mainly a medic’.

They were joined by an ex-Royal Navy search and rescue pilot.

And their pampered clients? 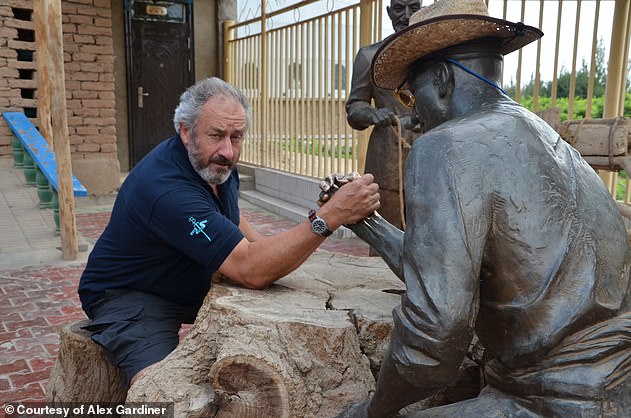 Alex, pictured, took sons of high-net-worth Arabs on adventure holidays in Africa – and threw in fake kidnappings and hostage situations to spice things up 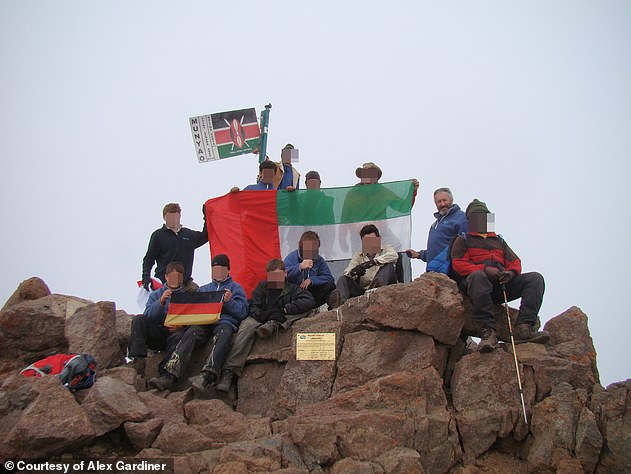 In a Zoom chat with MailOnline Travel, Alex explained that he couldn’t reveal their identities because they were the sons of ‘extremely high net-worth’ Arab mums and dads for whom he’d ‘completed sensitive tasks’.

Alex said: ‘These kids, they’ve got two phones, they don’t really know anything or do anything. Their lives are mapped out for them and they spend very little quality time at home. Their idea of culture is to go to a hotel, not get up until 2pm and order pizza.

‘They go from being fairly indifferent students to positions in government and there won’t be any adventure.

The dad said yes, and this led to a series of money-no-object adventure trips with his children and those of other parents – paid for by the parents – with Alex explaining that he believes he got the green light because he’d built up ‘real trust’ with them. 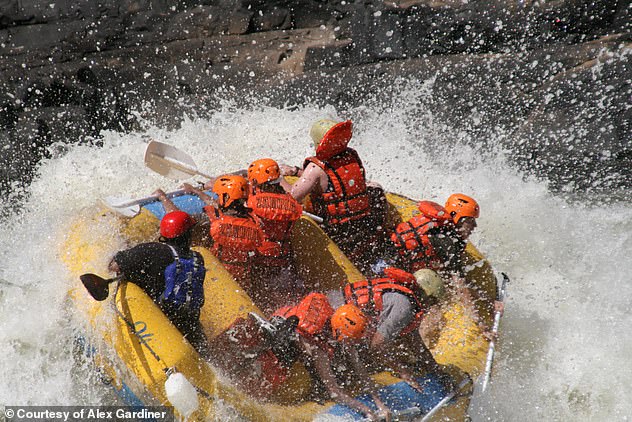 Whitewater rafting on the Zambezi River in Africa. Alex said: ‘The water was low, so the rapids were stronger. You literally see a wall of water coming toward you. We got tipped out again and again’

The first trip was to Africa, with the group including Alex’s teenage son and one of his friends, and two Israeli boys, the sons of a retired general and a friend of the Arab dad.

Alex said: ‘They clearly didn’t really want to be on it. This was their summer holiday. They were looking forward to parties. They weren’t expecting to be taken off by a middle-aged Brit.

‘We could have done a bootcamp and made it really nasty, but they wouldn’t have wanted to come back next year.’

What they did instead was no less of a shock to the system.

Alex said: ‘We jumped on a plane to Johannesburg and went straight to Alexandra Township, which is run by the Chinese Mafia. It was completely different for them [the boys on the trip].

‘The next day, we did a tandem jump from 12,000ft. That was also a little bit of a shock. They weren’t expecting that. They weren’t briefed on that. It was a real blast. They had a good few seconds of freefall. Then the next day, we flew up to Victoria Falls and did whitewater rafting on the Zambezi River.

‘The water was low, so the rapids were stronger. You literally see a wall of water coming toward you. We got tipped out again and again.’

The group then tracked wild animals, including rhino, and the boys experienced their first fake emergency.

Alex paid a ranger $100 to pretend that he’d been gored by a buffalo – and smothered him with the innards of a goat the team slaughtered to make it look like his stomach had been sliced open and his guts had spilt out.

The first the boys heard about the ‘incident’ was when a camp radio crackled into life and a voice on the other end pleaded with the team for help in assisting a nearby injured ranger. 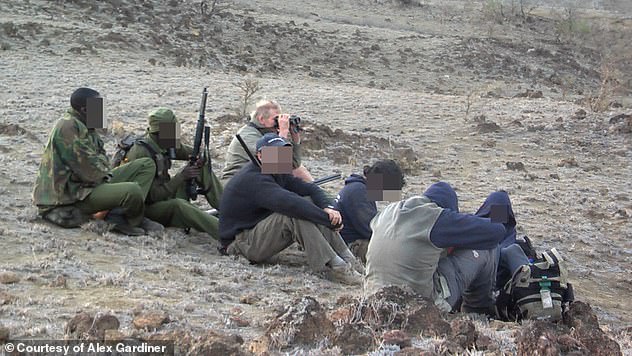 ‘During the first trip with the boys [in Africa],’ revealed Alex, ‘we sprang the surprise of them being involuntarily deputised as game rangers. With intelligence from the official game rangers we then joined in and started tracking “poachers”. The group in the photo were the blocking force as another group flushed out the “poachers” using vehicles and dogs. This pic was taken at first light and you can see our team are physically and mentally drained as they have been awake and on the go for almost 24 hours without rest or sleep… and maybe a little frightened. The four poachers ran straight into this group about an hour later. They had wire snares and barbed arrows and were not happy to be caught when our boys rugby tackled two of them. It was definitely “up close and personal” and the boys were silent for a few hours afterwards’

Alex said: ‘Within 20 minutes we found this guy lying under a bush with his “guts” all over the place. We leaned in and “put them back” and washed him, then the boys made a stretcher and carried it.

‘There was complete silence in our little camp that night. They’d never seen that in their lives.’

Alex said: ‘The poachers were not happy to be caught when our boys rugby tackled two of them. It was definitely “up close and personal” and the boys were silent for a few hours afterwards.’

Their roles? One was a driver, the others ‘kidnappers’ armed with knives.

Alex explained that the latter hopped into a jeep the boys were in during a stop at a petrol station – Alex’s jeep having driven off – and ordered the driver, the other actor, to drive down a dusty track.

They ordered them to stop, took the boys’ passports and wallets and then demanded to know ‘which ones were the Christians’.

Alex said: ‘My son was among them and he was crapping himself. He was the duty Christian. But we didn’t let that one go on too long.

‘We had been tracking the jeep and my medic was filming the scene in some bushes. We knew where the vehicle was going to stop. We came up behind and that was the cue for the robbers to run away and theatrically throw the bag up in the air containing all the passports, wallets and radios and so on. 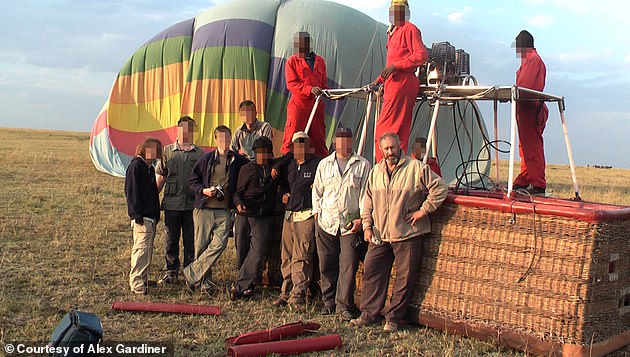 A balloon trip in the summer of 2009 over the Masai Mara during the migration of the Wildebeest. Alex said: ‘We had to be up at 0400 to get the right conditions’

The plot, as described by the publisher:

Living a respectable life in Cheltenham as a magistrate and property landlord, former agent and terrorist Tariq Al Hashmi falls into such a trap. With Libya’s Colonel Gadaffi no longer a moving part of the Axis of Evil and the Irish Troubles on the back boiler, what could go wrong?

His days as an embedded sleeper agent with a hidden fuse ready to be lit are surely over.

But complacency proves an unreliable companion. Those in the secret world he once occupied have long memories and other ideas. Unexpectedly his world starts to fall apart and Hashmi’s former spymasters try to manipulate him in ways he could not have imagined and for purposes he can only guess at.

‘We told the boys that they did very well – but didn’t tell them it was fake. There are guys running around today who think they went through all these things.

‘At the time it had all happened so fast they weren’t able to process it.’

One incident Alex staged, however, was so terrifying for his group that he had to intervene and admit that it was all a set-up.

Here an armed ‘madman’ appeared in front of his group during a ‘power cut’ while they were relaxing in the cinema room in the home of a millionaire friend in New Zealand.

Alex explained that he was allowed free reign to organise the trips as he saw fit, but word did get back to the parents that dramatic events unfolded.

He revealed that one of the dads flew out with his entourage to Africa to meet Alex for lunch, to check everything was ok – then flew home again (much to the son’s delight, who was touched by his dad’s interest in what he was doing).

And sometimes the families would send ‘a security guy’ on the trip ‘just to keep an eye’.

Alex said: ‘You get a so-called security bloke coming along and you can tell straight away if they’re a fraud.

‘We would burn them off pretty quickly, saying, “We’re going to abseil down this cliff, would you like to go first?” These guys suddenly shrink. By the end they’d become a very docile companion.’

Did these experiences change the boys for the better?

Alex said he hoped the experiences would help inform their ‘decisions, judgements and impressions – so character-building but with a long-sighted aspect to it’.

He added: ‘It didn’t make them do press-ups any quicker, but it made them into better people. They’d experienced extremes – hunger, cold, fear.’ 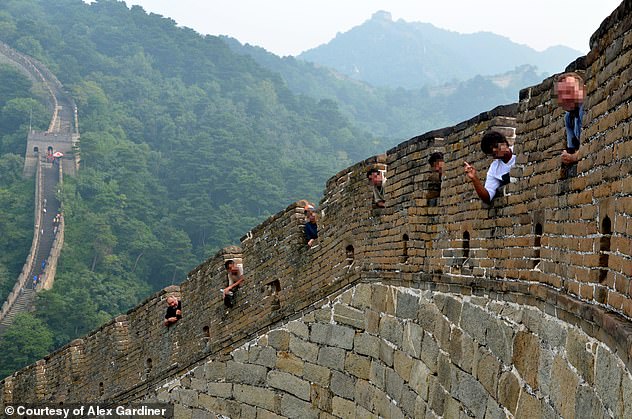 Sadly there was no scope for ‘off-piste’ adventures in China, revealed Alex. He added: ‘Just traveling on the Silk Road route from Xiang to Kashgar was immense in itself. The Great Wall is a lesson in what the Chinese are capable of… and those boys prayed in mosques in the Uighur region’ 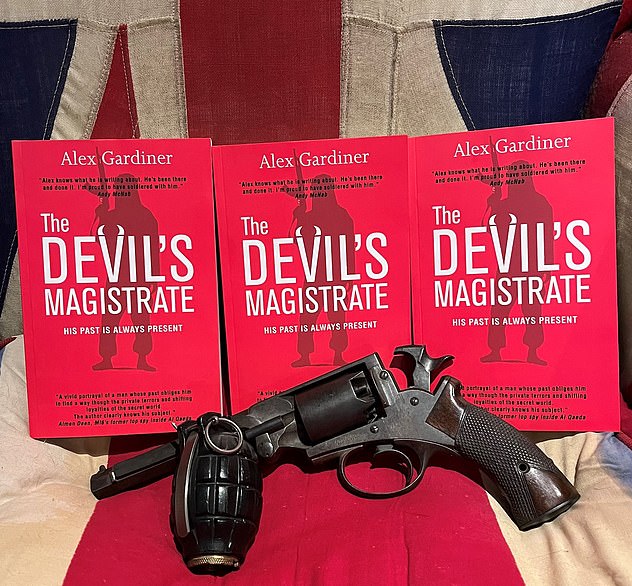 And what sort of trip does Alex like most for himself?

‘It’s the five-star hotel for me,’ he said. ‘None of that roughty-toughty stuff. I’ve been completely put-off camping by the Army. Maybe a skiing holiday. Not too far from a cup of hot chocolate and a warm restaurant.’

Alex Gardiner’s debut novel, The Devil’s Magistrate (£8.99, Nine Elms Books), is out now, available via Amazon and in bookshops.