There was harrumphing from some of the more conservative patrons of Ocean House, one of the smartest hotels along America’s East Coast, when they learned that Taylor Swift had bought the house next door.

The establishment’s customers were worried that the ordered tranquillity of their beloved hotel, a Victorian-style edifice that sits above a beach bordering the Atlantic Ocean on Rhode Island, America’s smallest state, would be disturbed by the singer’s exuberant antics.

The 29-year-old pop star, who has a property portfolio almost as long as her list of former lovers, paid £15 million for the ten-bedroom house. 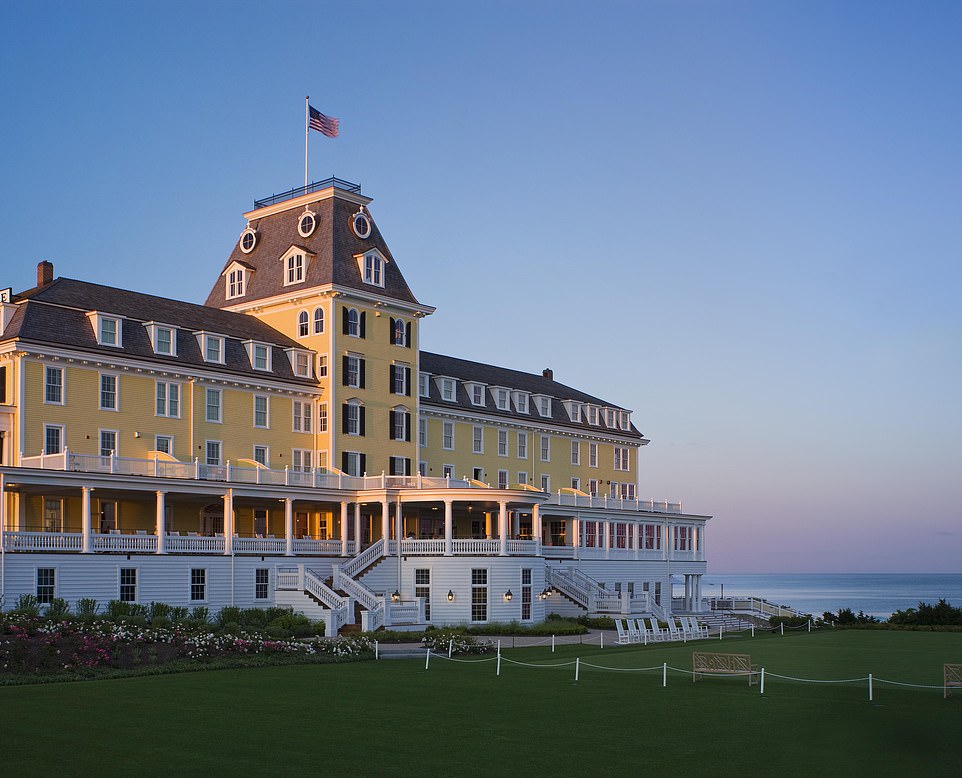 Ocean House is a Victorian-style edifice that sits above a beach bordering the Atlantic Ocean on Rhode Island, America’s smallest state

It didn’t take long for Miss Swift to live down to the expectations of her new neighbours. She hosted lively parties, including one at which she first declared her love for Tom Hiddleston, the British actor with whom she briefly stepped out, during which Tom was snapped on the local beach wearing a cringeworthy ‘I heart TS’ vest.

As it happened, the singer soon grew bored of both Tom and her house and now spends little time enjoying the hot tub from which she used to post endless pictures on Instagram.

So the ‘old money’ patrons of Ocean House can rest easy in their wicker chairs overlooking the croquet lawn, reflecting thankfully that the place doesn’t really cater for the likes of Miss Swift — although it has always attracted famous names, from Groucho Marx and Albert Einstein to, latterly, Hugh Jackman and Elizabeth Hurley.

It is a sprawling, butter-hued building that rises above the bluffs of Watch Hill, just a 90-minute drive from Boston, so it’s popular with frazzled city workers looking for a spot of R&R (although their laptops are never more than a few steps away). 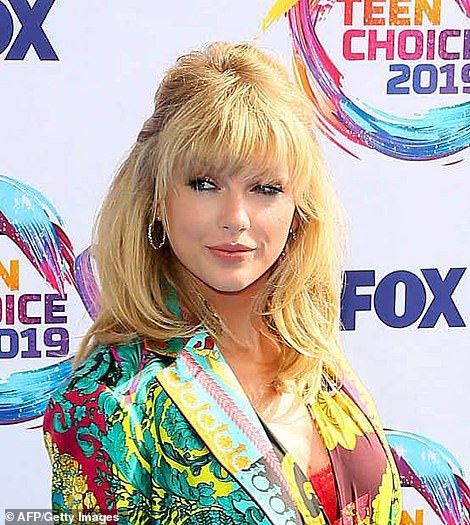 Taylor Swift has a property portfolio almost as long as her list of former lovers, paid £15 million for the ten-bedroom house on Rhode Island

What’s especially fascinating is that in 2003 it was completely rebuilt by a local tycoon, with painstaking attention to the original details. Thousands of bricks were restored and 5,000 artefacts salvaged. The walls are now filled with beautiful artworks including many sketches by Ludwig Bemelmans, best known for illustrating the Madeline French children’s picture books.

The bedrooms, decorated in sunny yellows and blues, have every touch a Boston entrepreneur might expect: TV over the bath, rain showers, iPads, a Nespresso machine. The only difference from a city loft conversion is that you’re lulled by the sound of waves crashing on the shore while you’re tucked up in your four-poster bed.

If you fancy a drive, pop behind the wheel of one of the management’s four Mercedes convertibles. Very trusting — although I decided a taxi might have been better after it took me 20 minutes of wrestling with the sat-nav to navigate back from a nearby shopping mall.

If the ocean beckons, the hotel will summon a local operator, Barton & Grey, to provide a beautiful yacht, all brass and mahogany, to sail you around the peninsula, with chilled rosé and jovial insights from the captain.

These quips tend to centre on the vast holiday homes owned by wealthy summer visitors. Some of the houses have become increasingly elaborate.

‘The bigger the house, the less it’s used,’ the captain observed wryly, pointing out something enormous owned by a financier who was never there. Apparently, this fellow had ‘I’d rather be working’ chiselled on a rock overlooking the ocean. Of course, New England has long been associated with autumn, when the Fall of the foliage produces those wonderful colours — but there is masses of appeal in summer, too.

Besides Rhode Island, New England consists of Massachusetts, Maine, Connecticut, New Hampshire, and Vermont, plus the enduringly fashionable islands of Martha’s Vineyard and Nantucket. I was particularly keen to return to Nantucket, which I last visited 20 years ago.

It’s an hour from Cape Cod on the high-speed ferry from Hyannis Port (get in the queue early to grab front seats for the best view), and the size of Manhattan but with a fraction of the population, although in summer it rises from 10,000 to 50,000.

Prompted by a recent reading of Herman Melville’s epic American novel Moby-Dick, I was keen to learn more about whaling, an industry which by the mid-19th century had become the islanders’ main source of wealth. 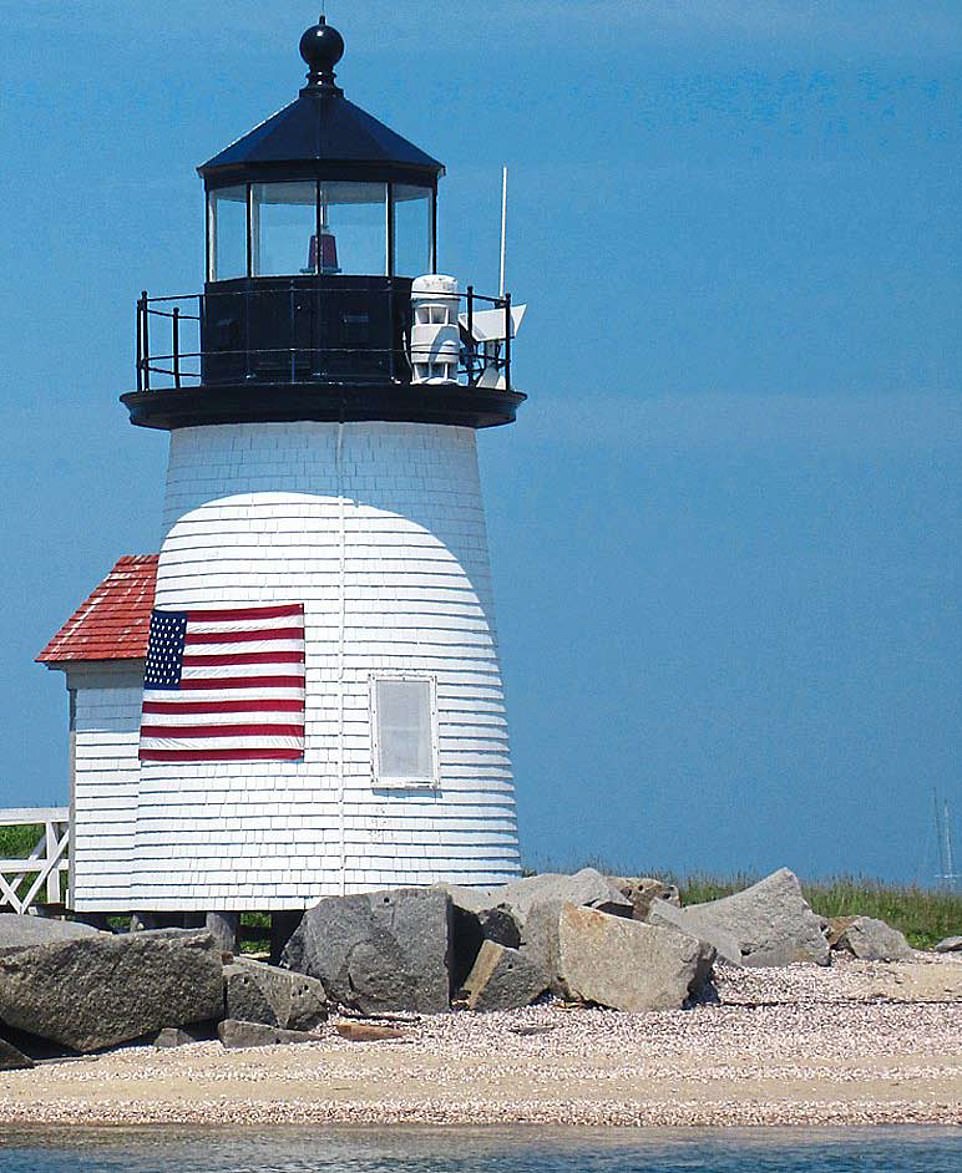 With their husbands gone for up to four years at a time, the wives became their family’s chief breadwinners. Some even gained unprecedented legal rights over property (a precursor of today’s power of attorney) while their husbands were away.

A few hours at the island’s Whaling Museum (dominated by a huge skeleton of a sperm whale) rewarded me with an insight into why catching whales had played a major role in female emancipation, given that in the mid 1800s this was the only place in the U.S. effectively run by women.

You can still go on whaling expeditions, though armed with a camera rather than a harpoon. Whales are attracted to the area by nutrient-rich seas in summer, and on a boat trip to the mouth of Massachusetts Bay we spotted minke and humpback whales, along with dolphins, seals and a lone basking shark. 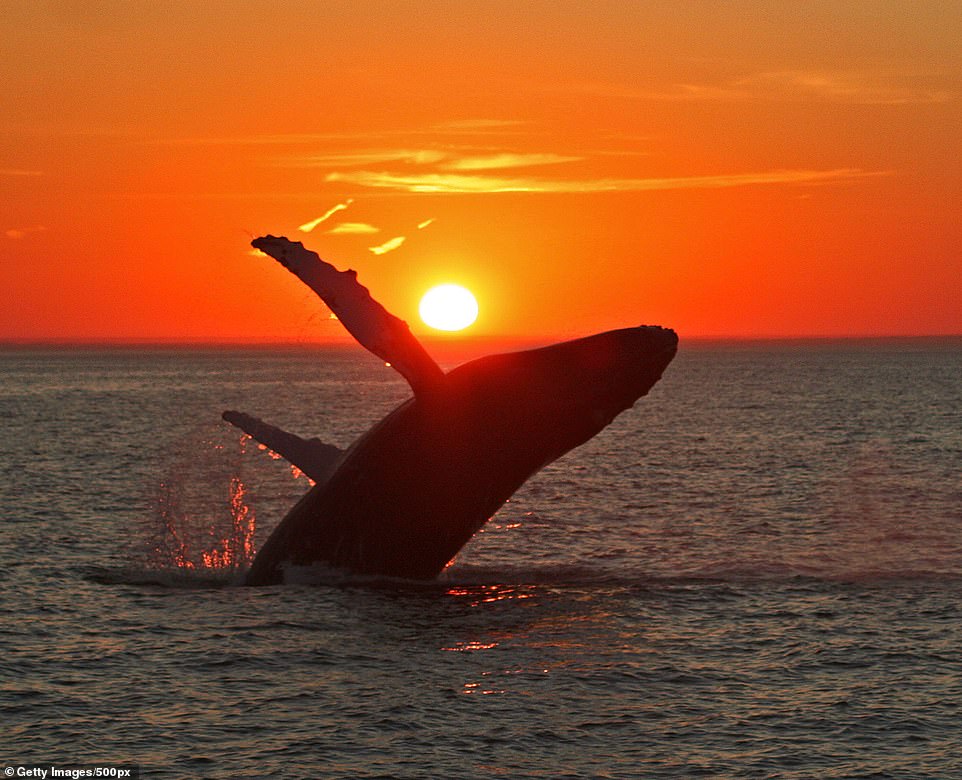 You can still go on whaling expeditions, though armed with a camera rather than a harpoon. Whales are attracted to the area by nutrient-rich seas in summer, and on a boat trip to the mouth of Massachusetts Bay we spotted minke and humpback whales, along with dolphins, seals and a lone basking shark

In more recent American history, the area was associated with the ill-fated Kennedy family, the closest the U.S. has to royalty.

In Cape Cod, the Kennedys still have a compound, consisting of three houses, from where power-hungry Joe Kennedy plotted the ascendancy of his sons John and Robert. The latter’s widow Ethel, 91, still lives there.

The blood and blubber that once caked the streets (sailors used to say you could smell Nantucket before you saw it) have been replaced by boutiques and cocktail bars.

The locals joke that millionaires here make ends meet by mowing lawns for billionaires. And the island has an unofficial dress code: you can usually spot a pair of ‘Nantucket Reds’ — cherry-coloured trousers or shorts — wherever you go

My main mode of transport in Nantucket was a bike hired from Young’s Bicycle Shop (for a daily charge of $33). I pedalled around the island’s numerous trails, pausing to admire a lighthouse or secluded beach and admiring the grey-shingled cottages as well as the larger homes built on Boston bankers’ bonuses.

Amid the preppy shops lining the cobbled streets of the main town (which has the feel of a model village) were numerous places to seek sustenance including Black-Eyed Susan’s, a popular diner serving blueberry pancakes and creamy eggs Benedict. Many of the local places like to boast that ‘we serve farm-to-table produce’. 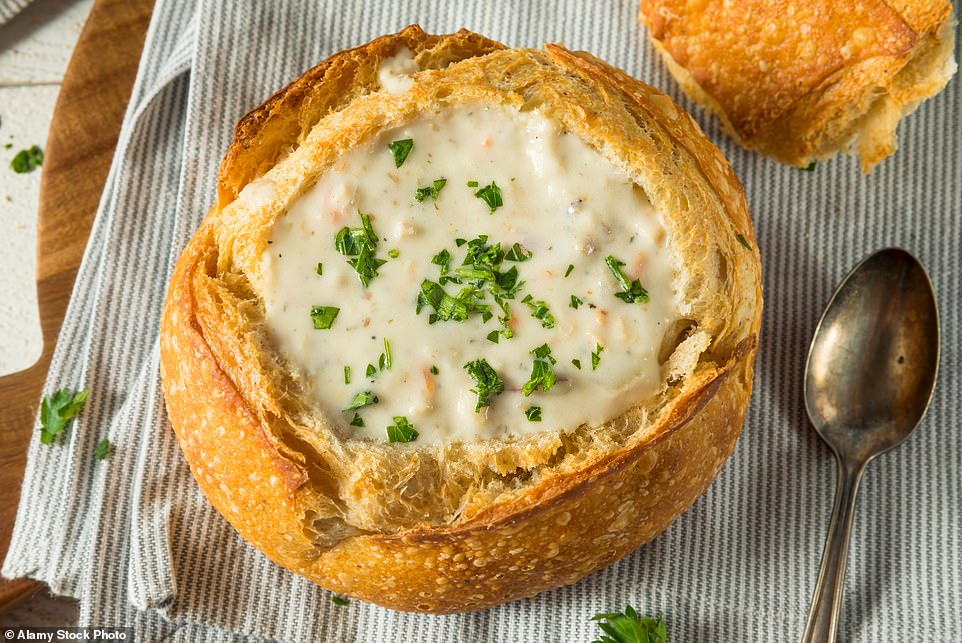 New England is also known for its fine clam chowder.  The dish originated in Massachusetts and historically clams were used as they were easy to harvest

After I’d sampled this wholesome fare, the mood changed when I quipped to a waitress that it was surprising moneybags Donald Trump didn’t own a property on the island.

‘Sir,’ she replied with feeling, ‘I believe that Mr Trump has tried to buy his way in here and there was even talk of him applying to build a golf club. All I can say, sir, is that it was made very plain to him that he is not welcome here, president or no president.’

Naturally, I avoided the subject of Mr Trump later in the day at my next pit stop, the Club Car restaurant, a refurbished railway carriage with a menu of delicious seafood dishes. But even here there was a no-go celebrity topic — because it used to be a haunt of the actor Kevin Spacey until he became involved (allegedly) with one of the bar staff.

We will spare ourselves the details, suffice to say that Mr Spacey has since opted for a lower profile and is now rarely seen on the island.

There are no Starbucks, McDonald’s or Apple stores —franchises are banned, even for Tommy Hilfiger, who has a summer home here. The arrival of a Ralph Lauren outpost on Main Street in 2006 so incensed locals that the town passed an ordinance: From then on, no chains could move in downtown.

My base in Nantucket was certainly not part of a chain.

The Wauwinet recently had a lavish refurbishment — a sweeping lawn lined with sun loungers (and shared, in the early morning mist, with plenty of rabbits) gives a perfect view of the bay.

In summer you can take a water taxi into town, although the journey takes an hour. But nobody here seems in much of a hurry.

The 32-room hotel, all wooden floors and soothing hues, has plenty of spaces to settle down for an exploration of the island’s strong literary tradition, upheld in the town’s beautiful library and bookshops. 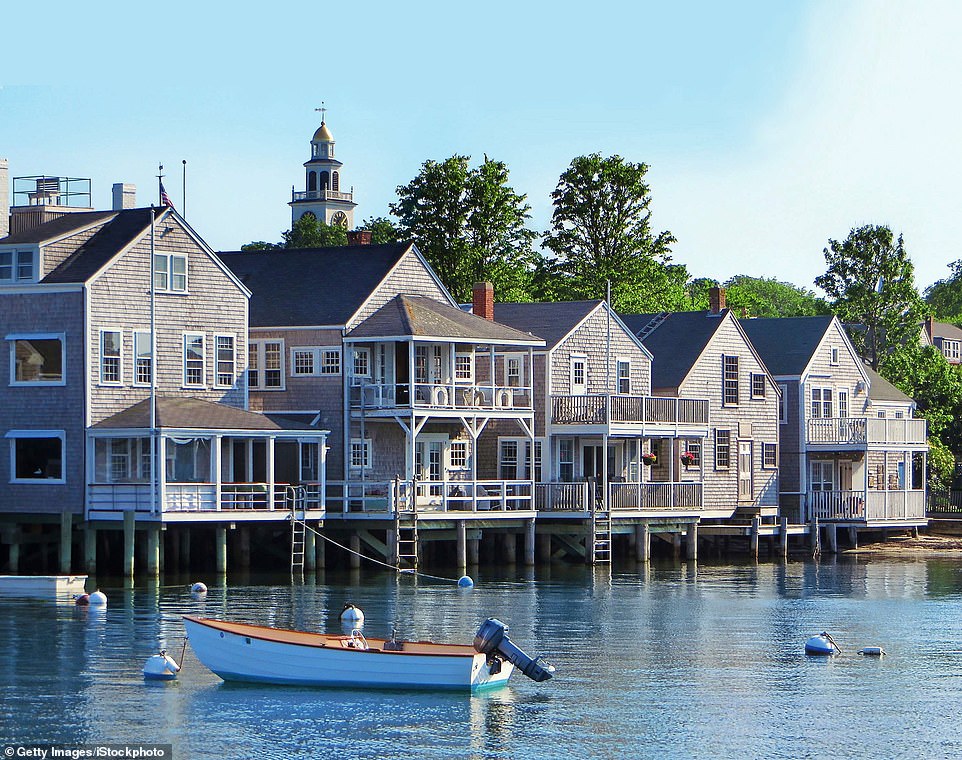 Or you can take a four-wheel drive tour of the Coskata-Coatue Wildlife Refuge at the northernmost point of the island.

I joined four other holidaymakers on a trip organised by the local nature appreciation society (for $70) and we were transfixed by a family of seals frolicking in the water. But such is the level of protection of their natural habitat that we were only allowed on a small part of the dunes, as five miles of them were temporarily closed in order to protect a pair of nesting birds.

I daresay some of the rich and famous here would like similar protection. But it’s open for all — and for that we can be grateful.

B&B doubles at Ocean House from £327 a night oceanhouseri.com. B&B doubles at the Wauwinet from £154 a night (wauwinet.com). British Airways (britishairways.com) Heathrow to Boston from £357 return. For more information, visit discovernewengland.org.