As the shadow of the moon swept across the Atacama Desert, the 52 Places Traveler stood celestially transfixed.

Photographs and Text by Sebastian Modak 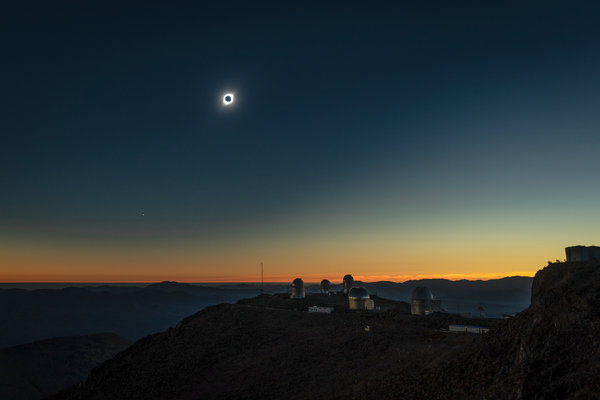 Our columnist, Sebastian Modak, is visiting each destination on our 52 Places to Go in 2019 list. Before watching the solar eclipse in Chile on Tuesday, he visited Salvador, Brazil, where music guided his travels.

It’s a place famous for its contributions to research on planets in other solar systems, but the roughly 1,000 people who had made the trip to the remote La Silla Observatory on the southern edge of Chile’s Atacama Desert had come to witness something a little closer to home.

Just after 4:30 p.m., the moon would block out the sun, an already rare event made all the more magical by the fact that this year, for just the third time in 50 years, the solar eclipse’s path of totality would pass over a major astronomical observatory.

Before coming to Chile to catch the total solar eclipse, I had been told by veteran eclipse chasers to keep my ear out for the reactions of birds and other animals at the moment of totality. But here there were none — just silence and a suspended giddiness in the air shared by the astronomers (amateur and professional alike) that left me physically shaking in the eclipse’s wake.

I came to La Silla Observatory from La Serena, a coastal city that had seen its population more than double with an influx of more than 300,000 people from all over the world who’d come to see the eclipse. I left hours before sunrise and, as a faint morning glow filled the horizon, turned off the Pan-American Highway — the same stretch of road I had traversed five months ago in Panama.

The assembled crowd was a mix of astronomers from the European Southern Observatory (E.S.O.), which operates La Silla; special guests, including the president of Chile and local school children; and paying visitors. Hours before the eclipse was to begin, people staked out their positions along the ridge overlooking the dry hills of the Atacama and, in the distance on this clearest of days, the Pacific Ocean.

Astronomers from the E.S.O. were scattered throughout the crowd, telling people what to expect and where to look. Onlookers compared gear and stories. As the afternoon settled in, one child whined at his mother.

Among the visitors was a healthy contingent of eclipse chasers, people who hop across the world from one eclipse to the next.

Bernie Volz, who had embedded himself in a group of Polish travelers, told me he had lost count after his tenth total solar eclipse, but that it hasn’t ever gotten old.

“Besides the amazingness of eclipse itself, traveling for them has made me go to places I might never have gone to otherwise,” said Mr. Volz, who’s from New Hampshire. “I’ve been to Bolivia, South Africa, Zambia — and they’ve all been fantastic trips, even without the eclipses.”

This time, Mr. Volz had been one of the lucky ones: He managed to buy tickets one year ago to the La Silla Observatory event in the five-minute window before it sold out.

As the spectacle began, people donned their eclipse glasses and aligned their eclipse projectors to watch as the moon’s silhouette slowly ate into the glowing orb of the sun. A gaggle of children and adults behind me stood fascinated as one of the E.S.O. astronomers showed how, if you interlock your fingers together, creating small openings, and place them between the sun and the ground, you could see tiny projections of the eclipse’s vanishing crescent.

And then totality approached. It was like some glitch had occurred in the natural order of things, the dim light of sunset taking over the sky when it shouldn’t have. The distant horizon turned orange, purple, green, and a shadow consumed everything. It got colder. I laughed uncontrollably, unable to do much else.

“Filters off!” yelled one of the astronomers, referring to the camera equipment that protects sensors during the partial phases of the eclipse.

Totality hit, the moon obscuring all but the silver corona of the sun. There were yelps of excitement. I heard applause from somewhere, but then there was silence. It all happened with the haziness I associate with lucid dreams. My mind was unable to process the fact that what I was seeing wasn’t actually an absence of something, a void carved into the heart of the sun.

I know, from official reports, that totality at La Silla lasted one minute and 52 seconds. But it’s hard to say whether it felt like five seconds or an eternity.

Then, after a brief encore in the form of the diamond-ring effect, when the moon’s topography allows some but not all light to pass through, resulting in a concentrated flare, totality was over.

More than one person around me wiped streaming tears from their faces. I choked back a few of my own.

“Do it again!” someone yelled.

And the show wasn’t over. Just an hour later, the sun bowed into the horizon, setting the sky on fire with its final performance of the day.

Sebastian Modak is the 2019 52 Places Traveler. Before being selected to report on the annual New York Times list, he worked at Condé Nast Traveler as an editor and staff writer. @sebmodak