The beloved British cookbook author has graced our bookshelves and television screens for more than two decades now, and her charmingly aloof yet unpretentious approach to cooking, food, and life has never resonated with home cooks more. Lawson—much like the rest of the world—couldn’t have predicted a global pandemic would upend restaurant culture and send us back to our kitchens for the bulk of a year. But the fact that her latest literary offering, Cook, Eat, Repeat, is filled with recipes that could easily be adapted through this unprecedented period of time? Well, that’s just the magic of Lawson herself: She always knows what we’ll need, far before we know we’ll need it.

Though Lawson’s cookbooks always tend to have a theme (i.e., a fresh focus on Italian fare in Nigellissima or baked confections in How to Be a Domestic Goddess) Cook, Eat, Repeat is much less a cookbook and more so a curated ode to Lawson’s favorite comfort foods, sensations, and kitchen-inspired memories. Chapters like “A Is for Anchovy” celebrate the gloriously salty sensation of the fish, and “A Loving Defense of Brown Food” highlights dishes such as stews, dips, and meaty sauces. The book itself, which Lawson started right before the beginning of the pandemic and finished as she quarantined alone throughout the height of it, kept the author focused and comforted within the safety and privacy of her home.

“I didn’t want the book to be dominated by [the reality of the pandemic], but I couldn’t ignore these times,” Lawson tells BAZAAR.com over the phone from London. “It made me redo one chapter entirely—I did have a chapter that was called ‘How to Invite Friends for Dinner Without Hating Them or Yourself’ and that obviously wasn’t appropriate, because I didn’t know how long [COVID] would be going on for. But it also didn’t even seem right being in a time when you couldn’t even have friends over. It seems so absurd you’d start getting anxious about what you were cooking. 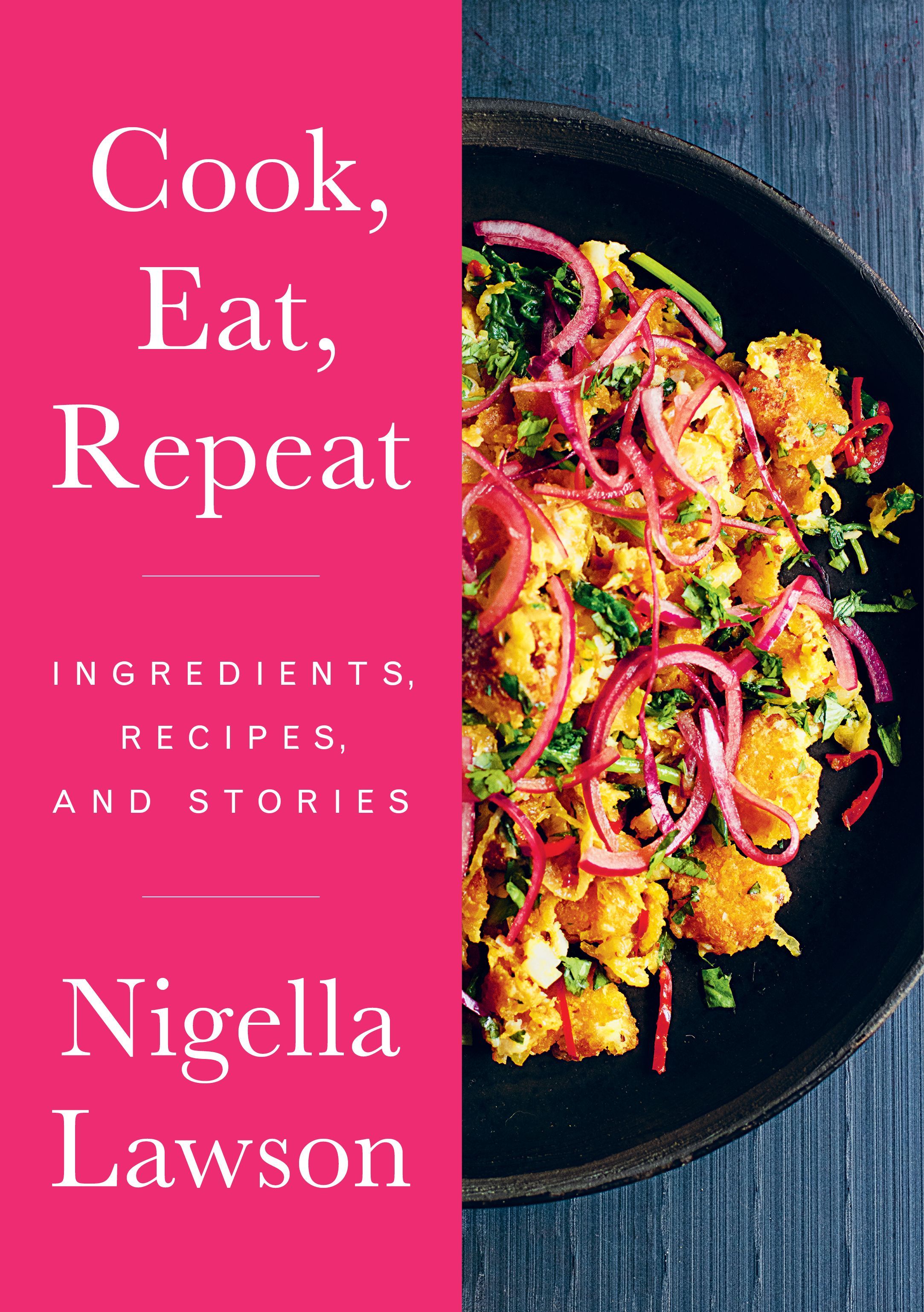 She continues, “It wasn’t that hard for me to redo it, because when I have people over, I cook food that is also the sort of food I eat when I’m at home by myself. Maybe there are more courses, but it’s essentially the same, so I recast that much more as just for thinking of families, having to think about what to eat for supper day in, day out. I also already had quite a few single-portion foods for cooking for one, but it seems so apparent that so many people were having to do that then—I was. I was alone in lockdown, so I either found more ways of saying in a recipe, ‘Well, this is for four, but this is how I’d cook it if I were cooking it for one,’ and exactly the best ways of making the adjustment summary.”

Lawson viewed putting together Cook, Eat, Repeat as a therapeutic process but ultimately as a practice of gratitude as well. Every day, she would wake up and taste-test—while simultaneously reflecting on the memories that fuel her recipes—in between moments of connecting with fans on social media who were also revisiting and reimagining their kitchens like never before. The routine reminded Lawson of why she dedicated her life to the pleasure of food in the first place. 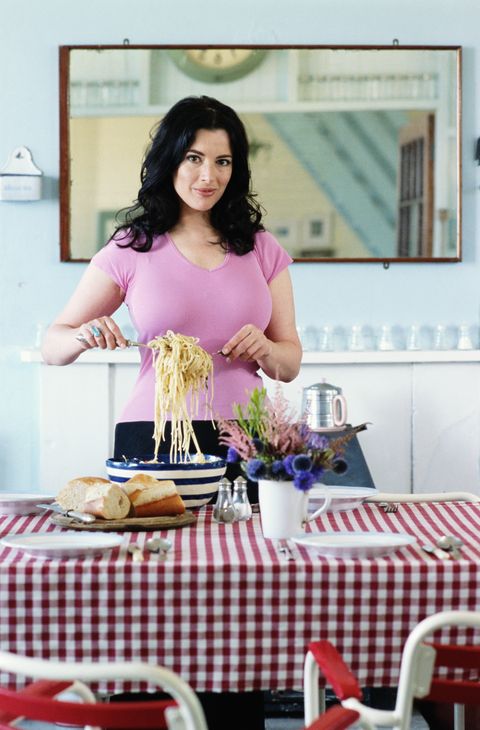 “You can’t write a book without feeling very intimately connected, but there’s something about this book because it kept me company during lockdown and I felt very fortunate to have work,” says Lawson. “My concentration was a bit shot, like everyone’s at the beginning, so it took a bit longer [to finish]. But in those shapeless days, it was wonderful to get up and know what I had to do and be really focused. I had the memories of all the meals I eat, because every recipe I write has so many memories attached to it. It felt, really, like a reinforcement of what I felt—how important food is to our emotional well-being as well as our physical well-being. That seemed in a way quite pronounced, because no one had any news—the only news anyone had to share [through lockdown] was what they’d been eating and cooking.”

Like so many of us, Lawson took pleasure in comfort recipes like lasagna, fried chicken sandwiches, and salty, chewy chocolate cookies. She isn’t here to shame anyone for their personal cravings—in or out of quarantine. In fact, she has an entire chapter of the book to simply titled “Pleasures,” followed by a persuasive essay on why no one should feel guilty for merely enjoying a meal.

I feel life offers pleasure, then it offers difficulties. You need to try and make the most of those pleasures.

“For a lot of people, but particularly for women, there’s so much policing over what they should eat, how they should approach themselves, and persecuting yourself for eating something you like. Because if you say, ‘It’s my guilty pleasure,’ to me, it implies that you feel I don’t deserve that or I shouldn’t be doing that,” says Lawson. “Food is such a pure pleasure, and I feel life offers pleasure, then it offers difficulties. You need to try and make the most of those pleasures. I just think that’s no way to live [in denying yourself]. I think it plays with your head as well as with your health.

She adds, “It sounds so straightforward, but so many people, and women in particular, have such a tortured relationship with food and their body. It seems to me to add greatly to your life if you can resist that, and I do think cooking is part of that.”

While the pandemic eliminated the chance for Lawson to have friends over and host dinner parties, she found cooking for herself to be just as meaningful a ritual, especially amid the unavoidable uncertainty and stress of quarantine.

“I feel that if you don’t cook … it’s hard to think of how you’d have got by in the last year. I get pleasure from looking at the ingredients, they’re like a still life in your house. A bowl of lemons or some leeks, and when you fry them, that tender green that arrives as a result. I get pleasure all the time,” quips Lawson. “The smells of the spices and the pottering about looking after myself. … I don’t like the term self-care, in a way, because I think it’s become slightly acrid, and it speaks of that sort of seriousness similar to an incense stick. Not that I’ve got anything against incense sticks, I like them—but I just feel it’s about seizing the day and seizing the pleasures that are available, because that’s how you can just feel more joy. It wasn’t really here when there was the capacity or the option, the possibility for enormous amounts of joy. Why wouldn’t you take it where you can?” 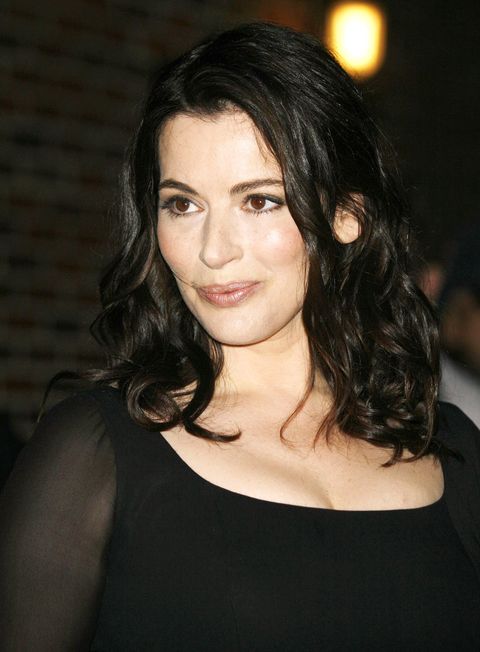 Lawson’s life mantras often intersect with her approach to food; one could argue that’s the secret to her success. When it comes to her relationship with the kitchen, womanhood, and style, Lawson is synonymous with laissez-faire. Her personal image and cooking methods have remained refreshingly consistent in her decades-long career. Relatable, reliable, and genuine—a feat few of her food world colleagues have been able to replicate. How the world views Lawson doesn’t mean it’s how she views herself, though. When asked to reflect on her impact in the food world, Lawson plays it cool.

I’m a complete klutz, but you don’t need dexterity or professional skill to cook food that tastes good.

“If I think deeply about it, it still feels a bit odd. It wasn’t what I thought I would do when I started in the working world, but I think that so many important things in life happen by accident,” says Lawson. “Although, initially I felt, and I still feel it very strongly, that I’m a home cook. I don’t have training. I’m a complete klutz, but you don’t need dexterity or professional skill to cook food that tastes good. I thought that it seemed so important to really show people that you don’t need to cook like a restaurant at home. You can be freer at home, and all that really matters is, does it taste good, and does this make my home feel happy?”