‘Four out of five? That’s failure’: The co-owner of ‘the world’s best B&B’ reveals the secrets to its success, from his ‘OCD traits’ to the quirky decor

Failure. That’s how Andy Banner-Price, the co-owner of The 25 Boutique B&B in Torquay, sees a four-star review on Tripadvisor, which earlier this year declared it the world’s best B&B for the second year running.

To date it has over 800 reviews on the site – and every single one of them is an ‘excellent’ five out of five (MailOnline’s etiquette expert William Hanson recently added to the tally with a five-star review from his visit).

When MailOnline Travel asked Andy what he’d do if a guest posted a four-star review, he said: ‘If someone did have a less-than-excellent experience, if they were a genuine guest and for some reason we have failed, then we would just need to take that on the chin.’ 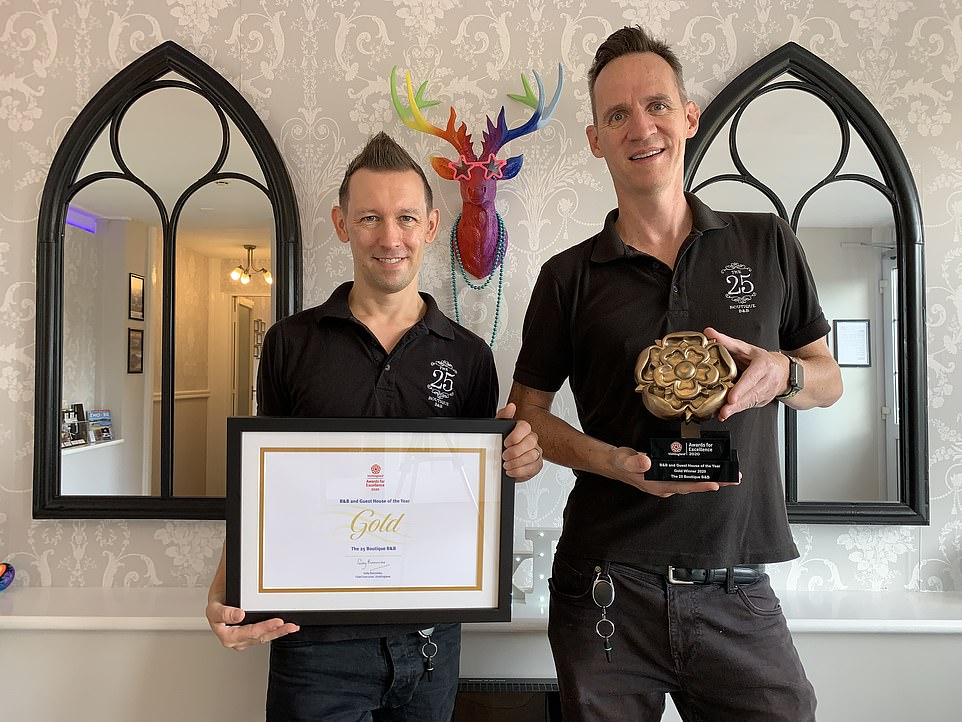 Failure. That’s how Andy Banner-Price (left), the co-owner with husband Julian (right) of The 25 Boutique B&B in Torquay, sees a four-star review on Tripadvisor, which earlier this year declared it the world’s best B&B for the second year running. The couple are pictured here with their 2020 Visit England B&B of the Year award 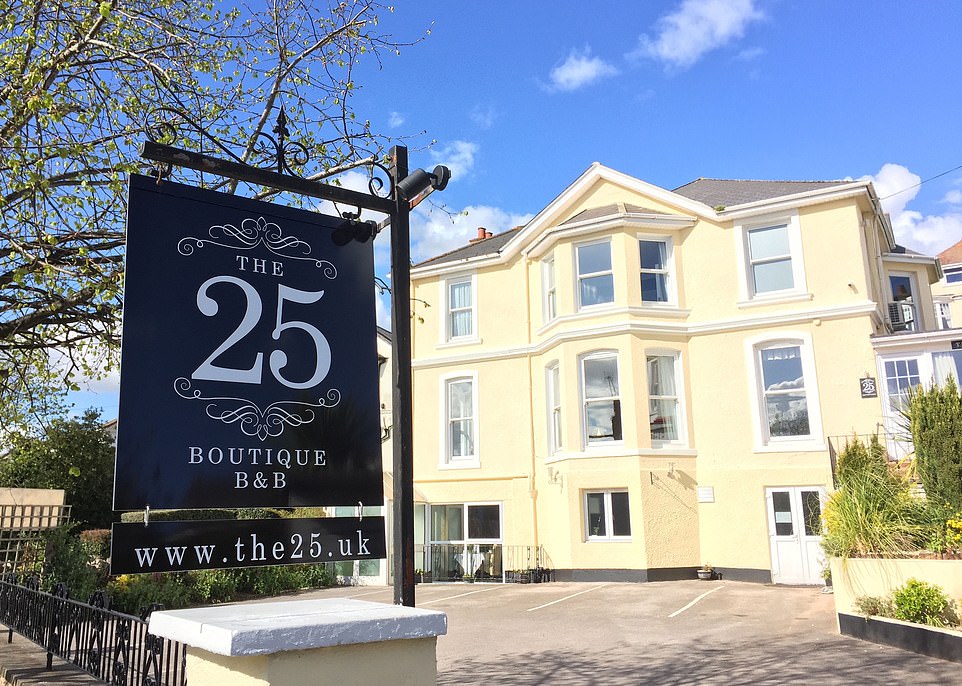 When MailOnline Travel asked Andy what he’d do if a guest posted a four-star review, he said: ‘If someone did have a less-than-excellent experience, if they were a genuine guest and for some reason we have failed, then we would just need to take that on the chin’

And right there is all you need to know about his standards – anything less than perfection just won’t do at all.

The perfect score for The 25, which Andy runs with his husband, Julian, has even held steady despite a fire alarm once going off at 1.30am and waking everyone up.

How did the couple head potential grumbling off at the pass? Hospitality managers pay attention – they went the extra mile, and then a bit further for good measure.

Andy said: ‘In the morning, before breakfast, I canvassed opinion from other B&Bs and asked “what would you do?”

‘Ninety-nine out of 100 people said “just apologise”. A couple of people said “I might offer them a complimentary drink”.

‘But to us, that wasn’t good enough.

‘We tailored the response to each person, according to how long they were staying and so on. So one guest who’d already had his stay covered by his company, we offered him a bottle of wine on check-out.

‘Someone who stayed for a week, we knocked a whole night off their bill. We said “you won’t have had a proper night’s sleep so, the bed part is half the B&B, so we’ll only charge you six nights”.

‘Two of the guests have already been back and another one has booked in for a couple of weeks actually, so three out of the four or five woken up that night actually came back again – so it’s about how you handle things that go wrong. 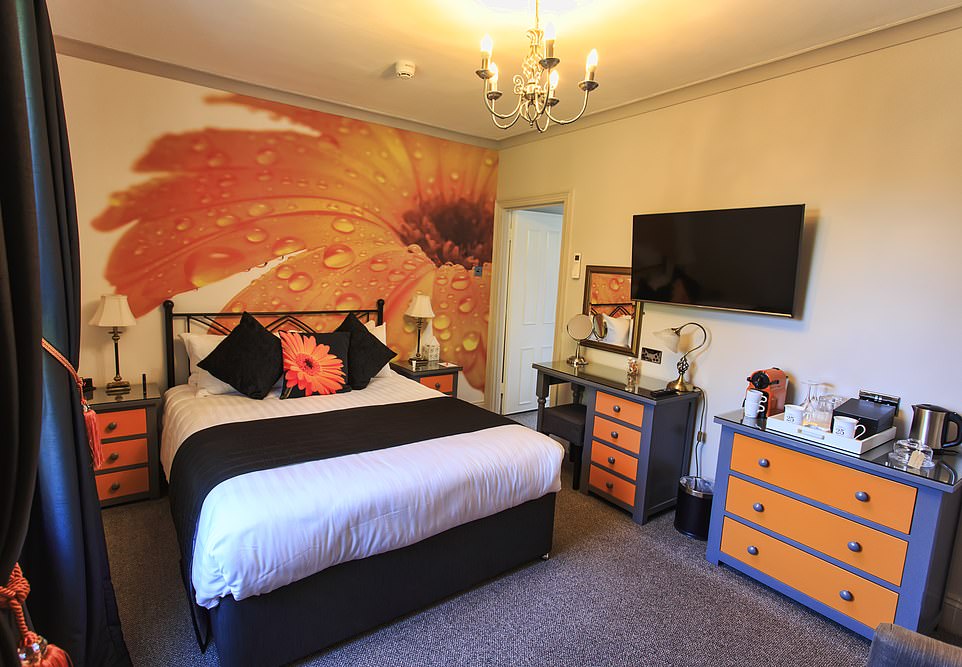 The 25’s Oddicombe Room, which features a giant orange gerbera. The 25 has been up and running since 2015

He said: ‘Yeah. We both probably have OCD traits. We’re obsessive about cleanliness and detail. Those plug sockets that are perfectly positioned next to the desk, both of the screw heads will be in line, because it just looks better. 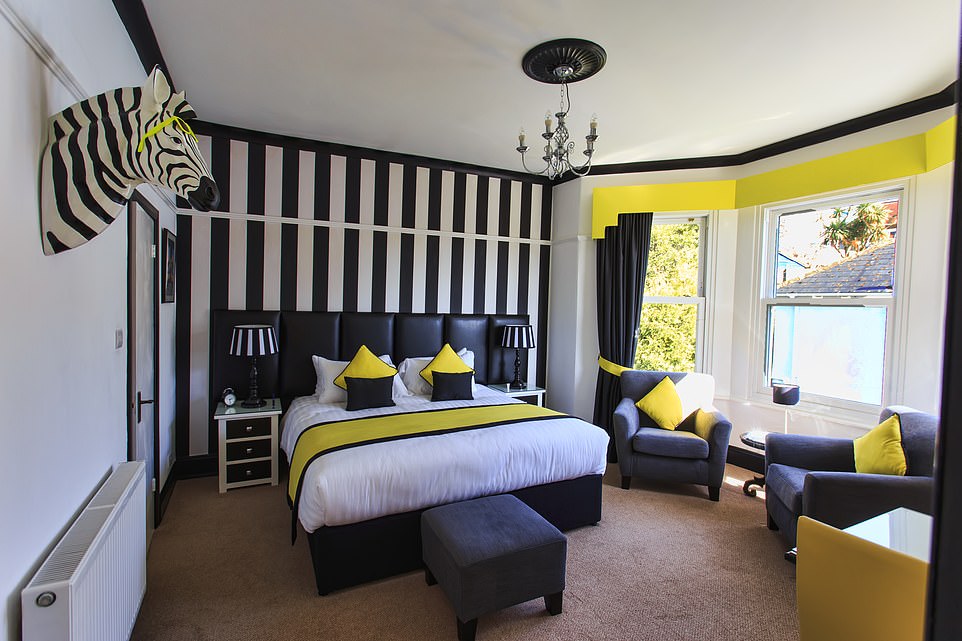 The striking Torre Suite, which features bold hues and Frank the zebra head

‘When we’re deciding on the placing of something or a colour, where a light fitting would go for instance – we discuss it for an hour. Because it’s important to us.

‘We make sure that everything is right and works and as it should be.

‘But then on top of that, we really care about the guest experience and that they have the best possible stay with us, not only here, but generally. There’s no point in us having fabulous accommodation if they then don’t enjoy their experience on the English Riviera.’

In this department, Andy even makes sure the surrounds are looking spick and span.

He said: ‘En-route there’s a postbox, which had a kind of faded pink colour and desperately needed painting. So I complained to Royal Mail and got it painted. And now it’s beautifully red and shiny. Because I don’t want my guests to have to walk past a postbox that looks like it needs painting.’

The couple also produce a leaflet of their recommended restaurants and local walks.

Andy said: ‘We point out all the tourist attractions and interesting things to see en-route. You can walk to Cockington village, which is a thatched village and croft centre.

‘And we recommend a circular walk so that they come back a different way, along a stream and through some woods and back out onto the seafront and things.

‘If we could control absolutely everything, including the weather, then we would.’ 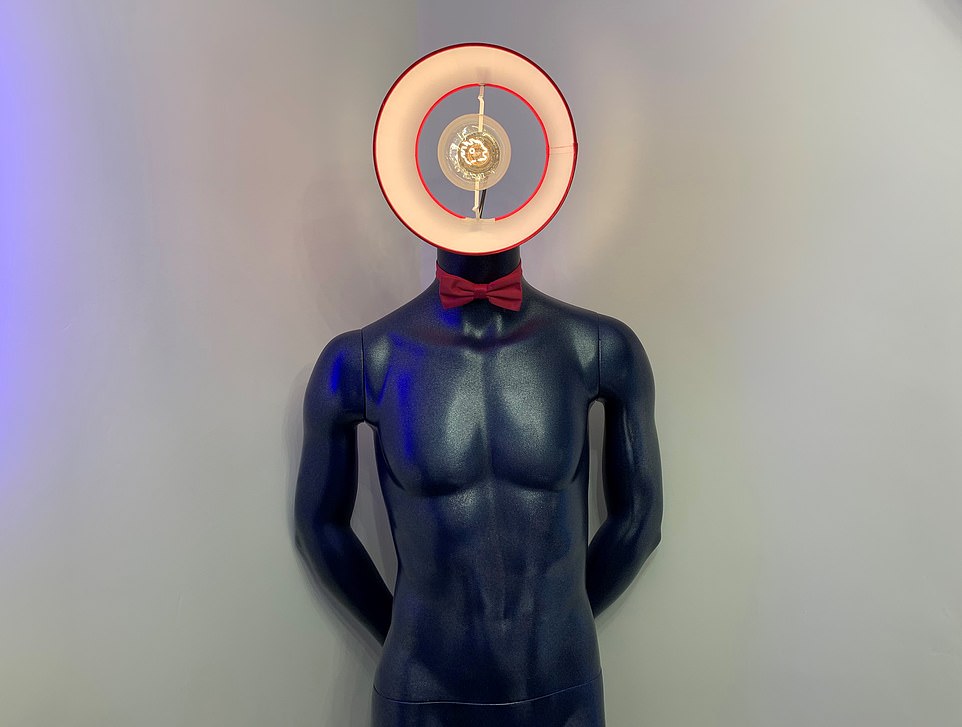 Andy said that if he could control the weather, then he would. Pictured here is one of the B&B’s eye-catching light features

Andy and Julian work incredibly hard – but do occasionally take days off so they ‘don’t get crotchety’ and normally ‘go an hour or an hour and a half down the road and stay at another B&B’.

Are there any common mistakes they see while they’re away?

Andy said: ‘I think it’s obvious when people haven’t thought about the customer journey, or they’ve not stayed in their own bedrooms, so it’s maybe more so for larger places, they maybe get an interior designer in to design a fabulous hotel room that looks good, but when you actually try and use it, there’s no flow to it. It’s obvious that they’re interior designers rather than hotel managers. 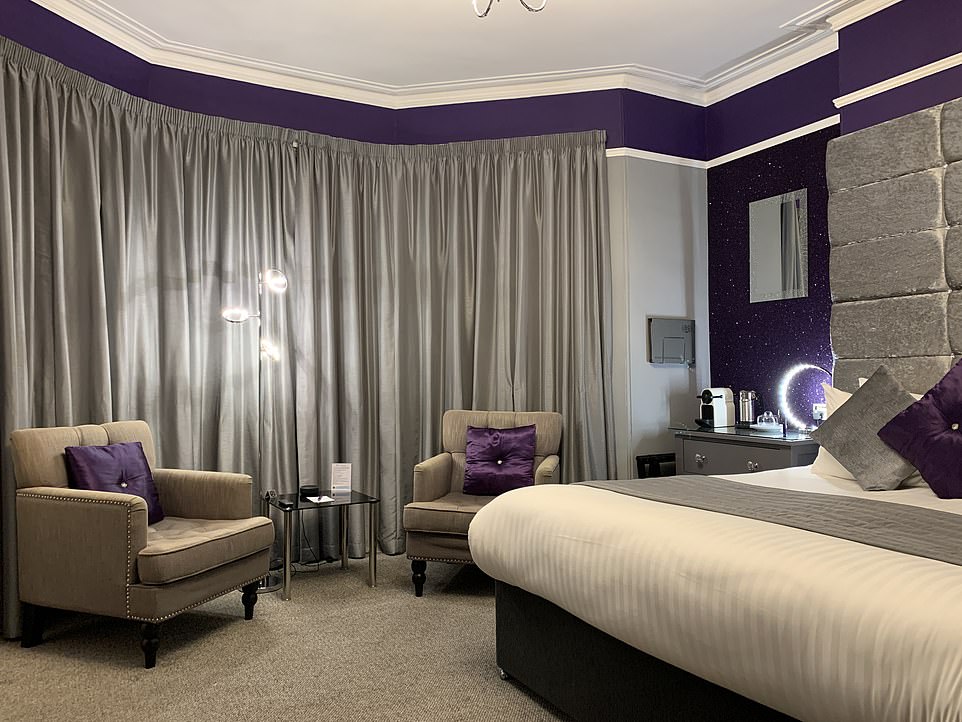 ‘Most people who choose to stay here absolutely love everything,’ said Andy. He reveals that the unique decor serves to help the property stand out from the crowd in Torquay, where there are around 150 B&Bs 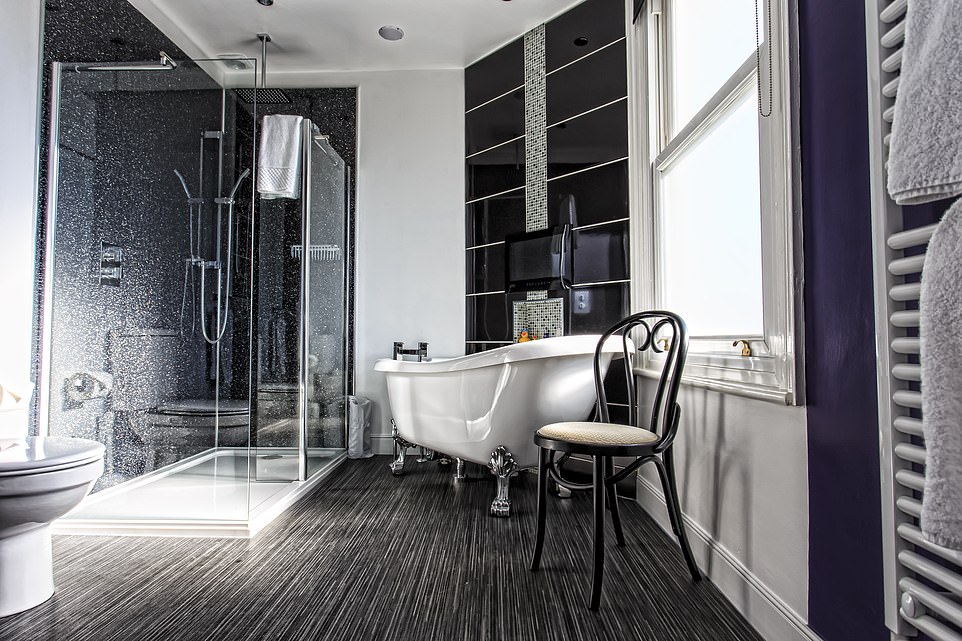 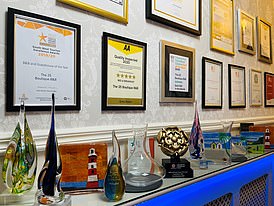 The 25’s awards are proudly displayed

*A selection, to be accurate

‘I’ve been to places where you go to make a cup of tea, but the kettle isn’t plugged in and you’ve got to hunt for a plug because there isn’t one next to a tea tray.

‘I’ve been to places where I’ve had to unplug a lamp and have the kettle boiling on the floor.

‘And then you’ve made your tea and you’ve got your wet dripping tea bag but then the bin is on the other side of the room rather than next to your tea tray.

‘So do they expect you to drip tea all over the carpet on the way to the bin?

Of course, what strikes guests at The 25 isn’t just that the bins, tea trays and plug points are all perfectly positioned. It’s the bold décor, from quirky lamps to vibrant colour-schemes.

‘We realise it’s not for everybody,’ said Andy. ‘But there are 30 B&Bs just on our road and there’s something like 150 in Torquay and about 80-ish hotels. So you need to stand out in a very crowded market and just being excellent quality or five-star wasn’t enough.’

Andy continued: ‘This, when we took over in 2014, was a 10-bedroom guest house and literally every surface was a shade of beige.

‘Even the feature wallpapers behind the bed were beige flowers. So we decided that we’d be a bit bolder and go for something that’s an escapism from your normal life.

‘We’re a niche product but there’s a lot of people looking for our kind of property.

‘And most people who choose to stay here absolutely love everything – they love the sparkly wallpaper behind the beds, the feature lights and the mannequin lights that I’ve made, the Frank the zebra head in the Torre Suite, and they really love the fun atmosphere.’

The 25 is undoubtedly an amazing success story and Andy and Julian now find that the majority of bookings are from repeat guests.

What do they find when they return? Something even better.

‘We say it’s never a finished product,’ said Andy. ‘We’re always trying to improve what we have.’

Failure is not an option.