From gaudy to gorgeous: Former Trump tower is unrecognizable after its transformation into the tasteful St. Regis Toronto in the luxury brand’s Canada debut

It’s 4pm in the afternoon, and we’re enjoying the cakes and sipping tea in the hotel’s Astor Lounge.

In an hour, one of the talented staff members will saber a bottle of champagne in an impressive St. Regis tradition that marks the subtle change from the casual cafe vibe of the day, to the busy, bustling bar of the evening.

Change is something that the St. Regis, it seems, has a talent for. 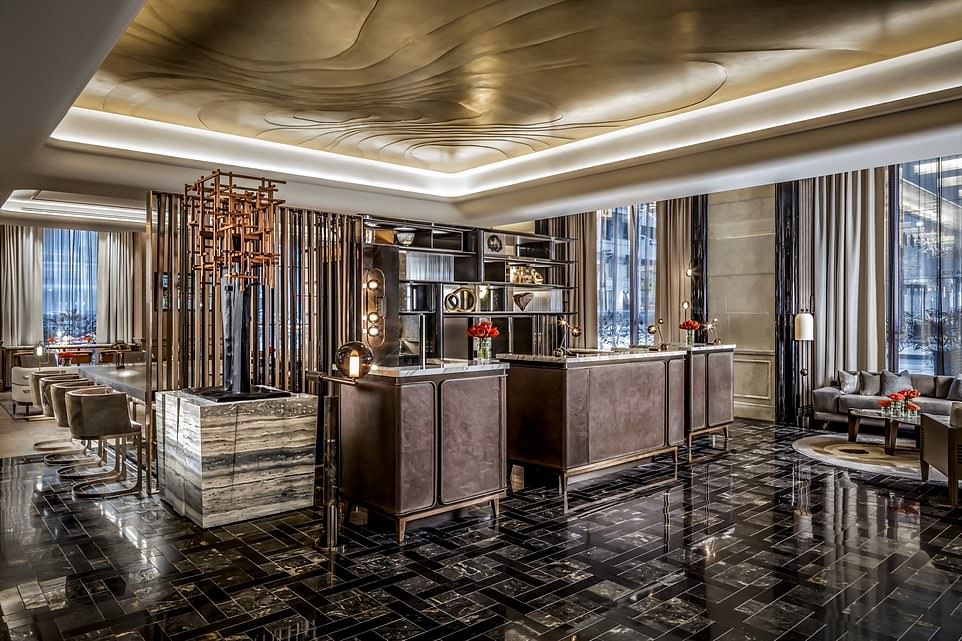 St. Regis Hotels and Resorts opened The St. Regis Toronto in December 2018 – the brand’s debut in Canada (pictured is the hotel’s check-in and lobby) 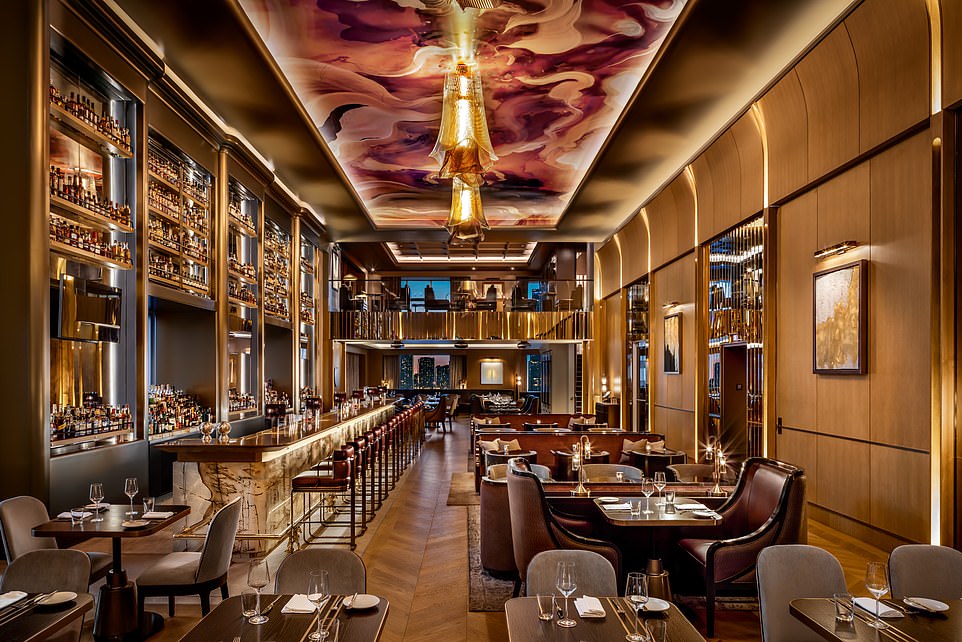 In 2018, the luxury hotel group bought what was then a Trump hotel, bedecked in intimidating black and ornate gold. The Trump International Hotel and Tower opened in the city in 2012 but was quickly hit with financial troubles, legal woes and customer complaints. One particularly scathing review, which referred to the ‘tacky, new-money’ clientele and awful service at the misguidedly-named hotel restaurant America, recommended Torontonians avoided it entirely.

Room sales dropped even more amid a political backlash against Donald Trump when he announced he was running for office.

Today, the St. Regis has shed its former owner’s ostentatious decor and brash celebration of all things American, to create a luxurious yet welcoming atmosphere that celebrates its Canadian home.

Its centerpiece is Louis Louix, its 31st floor bar and restaurant which has become a hit among Torontonians and tourists alike.

Inspired by the city’s history as a distillery hub, it features a two-story high bar with 500 dark spirits from Toronto and around the world. Even the impressive ceiling mural, Bouquet of Whisky’ by Toronto muralist Madison van Rijn, is designed to represent the inside of a glistening crystal whisky glass. In fact, it recently secured the prestigious International Hotel Design Award at the 2019 Restaurant & Bar Design Awards.

And St. Regis’s good taste extends to its menu too. 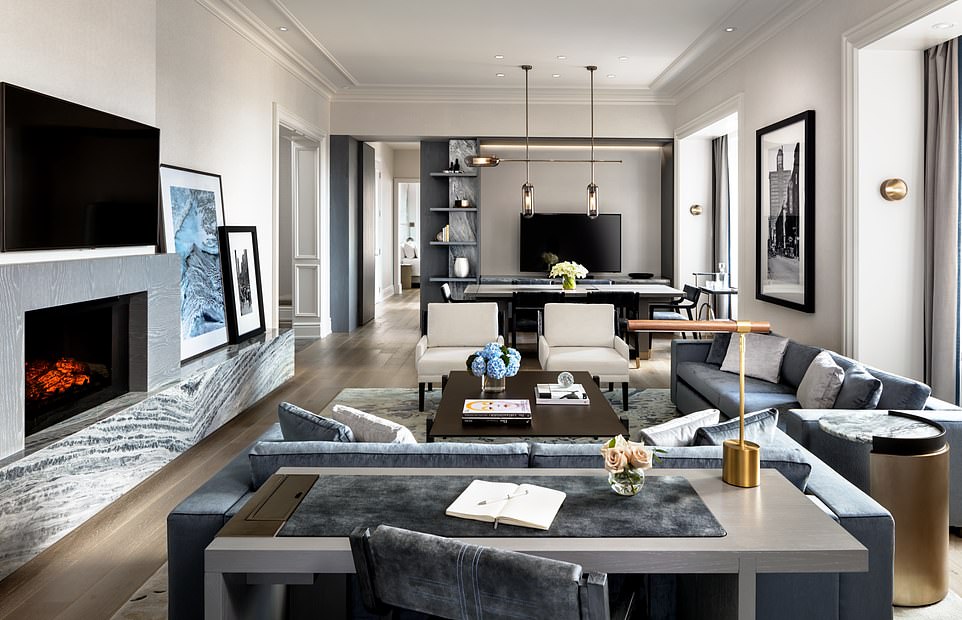 Our two-bedroom Caroline Astor suite was the perfect place to relax and unwind. It boasted a full kitchen, two and a half bathrooms – with heated floors and TVs embedded in the mirrors – and a huge living room with conference sized table and fireplace (pictured) 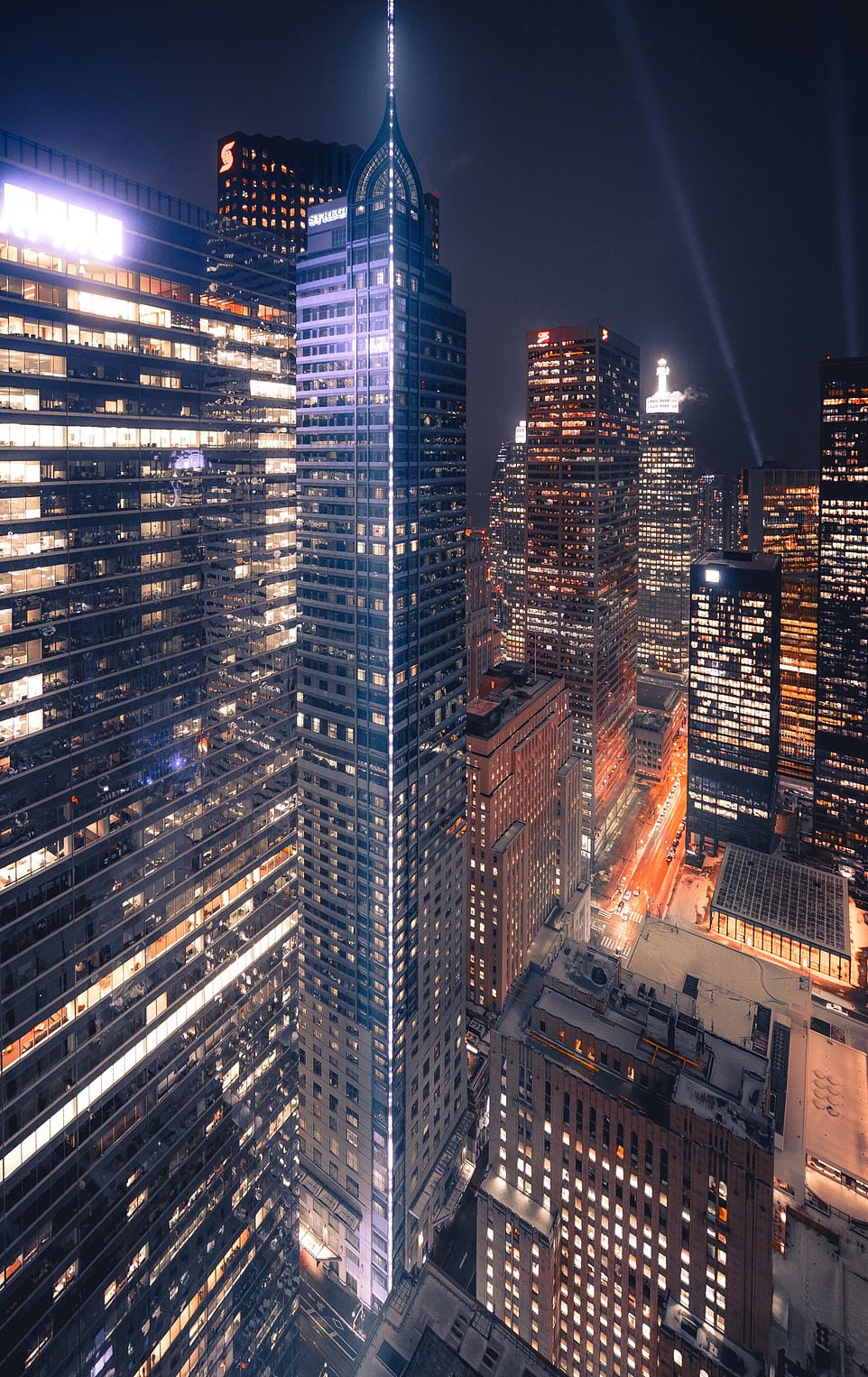 The hotel (pictured) features 124 luxury suites, or 258 guestrooms in total, plus the hotel lobby, Louis Louix, 12,000 square feet of meeting and event spaces, fitness center and spa with an infinity-edge saltwater lap pool

Guests can enjoy delicate seafood, such as smoked scallops, Nova Scotia caviar or fresh local oysters, or tuck into a succulent steak or juicy seared Quebec duck breast. And one cannot visit without having a gigantic slice of their Louis King Cake – an extravagant 20 layered chocolate masterpiece that looks straight out of children’s movie Matilda.

For a truly regal experience, return in the morning for the Royal Brunch – eight delectable dishes including a mini croque madame, steak and eggs and a petite dessert tower. Wash it down with a signature Bloody Mary, named the Rouge 140 after the number of languages spoken in Toronto

If you could possibly still be hungry, the hotel’s afternoon tea features an impressive tower of scones with clotted cream, pastries and cakes, and a selection of high end, specialty teas – sourced from the local Sloane Fine Tea Merchants, a women led, immigrant-owned business in Toronto.

After all that food, we were in desperate need of a lie down. Thankfully, our two-bedroom Caroline Astor suite was the perfect place to relax and unwind.

Considerably bigger than my New York apartment, the suite boasted stunning views over Toronto plus a full kitchen, two and a half bathrooms – with heated floors and TVs embedded in the mirrors –  and a huge living room with conference sized table and fireplace. 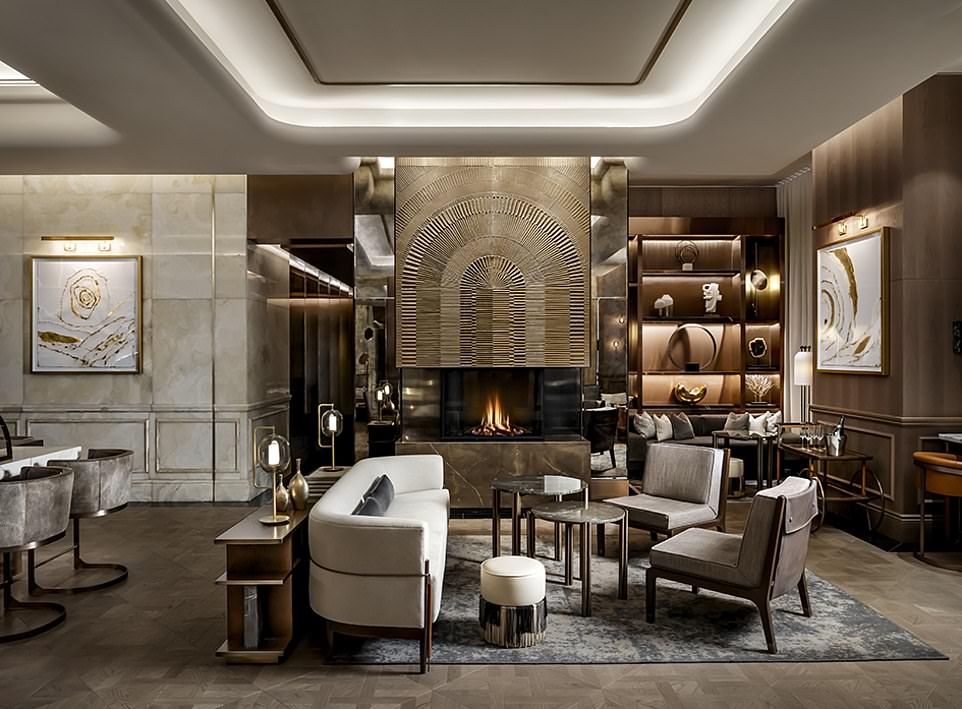 The hotel’s Astor Lounge offers afternoon tea by day, before the daily sabering ritual marks the subtle change from the business lunching suits and relaxed, leisure travelers by day, to the busy, bustling bar spot of the evening 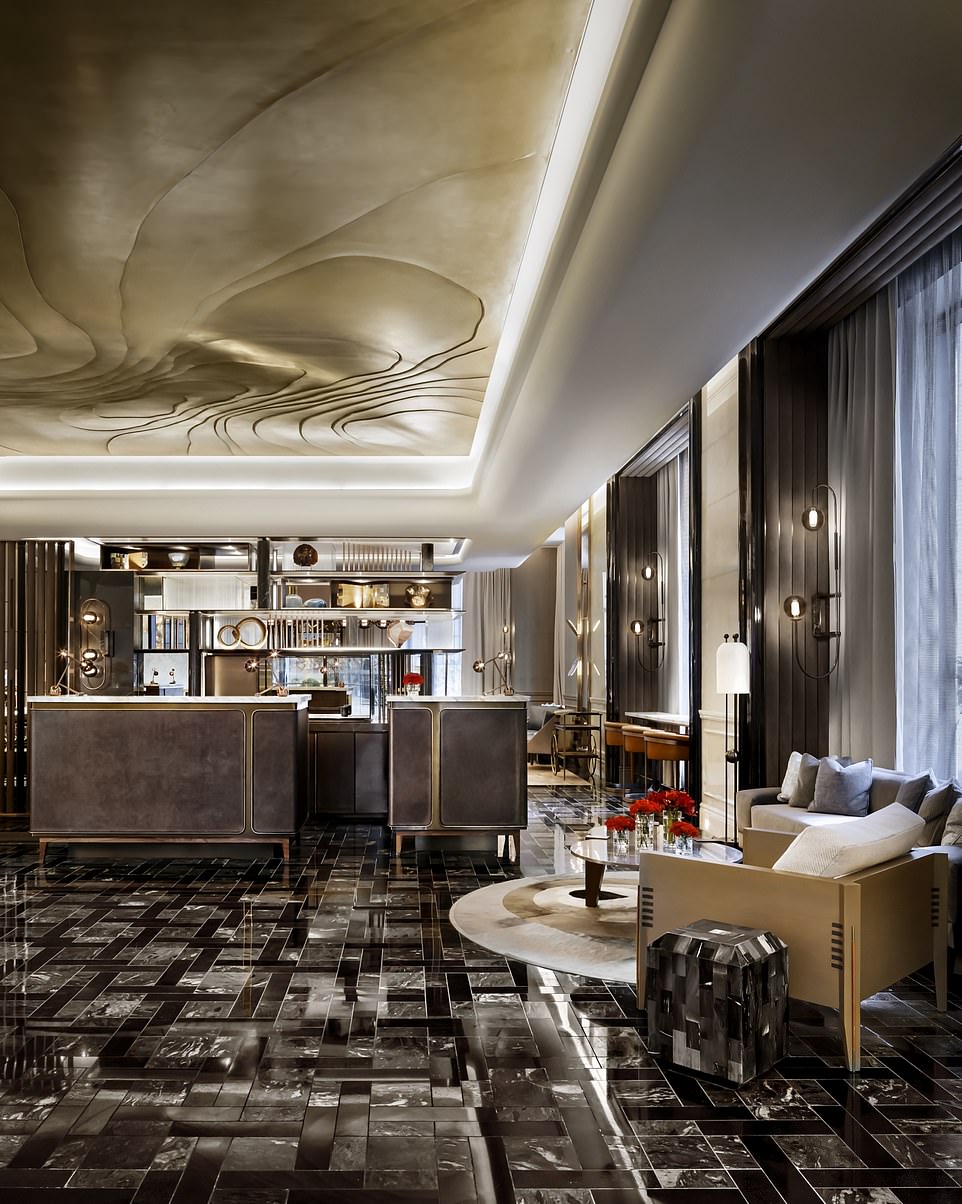 Where St. Regis really stands out from other hotels – the service. Our suite came with our own personal butler, who could be called upon to pour a rose petal bath, brew a fresh pot of coffee or even unpack and pack your case. While staff on the check-in (pictured) could not have been more helpful

The highlight, for me at least, was the free standing bath in the master bathroom, that overlooked the city from floor to ceiling windows.

The master bedroom is accessed through a door hidden in the wall which we would have never spotted if not for a hotel butler who revealed the room like a magic trick.

And that’s where St. Regis really stands out from other hotels – the service.

Our suite came with our own personal butler, who could be called upon to pour a rose petal bath, brew a fresh pot of coffee or even unpack and pack your case.

And because St. Regis hate to disappoint, they will also offer some incredible experiences for guests who request it, at an additional cost. Whether that be, organizing a helicopter ride to Niagara Falls, just a short flight away, or our butler who agreed to teach my guest and I how to use a huge knife to saber open a bottle of champagne – adding an impressive new party trick to my repertoire.

Superior One Bedroom Suites from $450 USD + tax per night

St. Regis is also careful to stay true to its roots. The first St. Regis opened in New York City in 1904 and quickly became a byword for luxury.

The brand has since expanded to 41 luxury hotels around the world, but they like to make a subtle nod to their original – such as the St. Regis’ floral tea blend – which uses the favorite flowers of Mrs Astor, the famous 19th Century New York socialite and wife of founder John Jacob Astor IV. The hotel’s signature scent, which is available in candles and room fragrance, is also based on her scent, blend of roses, quince blossom and violets.

But the hotel also embraces its locality – featuring local delicacies and specialty whiskies. Even the vibe is much more ‘Toronto’ – more relaxed and informal – than other St. Regis hotels, without compromising on luxury.

Perhaps it’s that combination which has seen the St. Regis become a celebrity stay of choice within its first 12 months of opening.

The Raptors chose to stay at the 65-story hotel after their historic win against the Golden State Warriors in June, while Hollywood A-listers descended on the St. Regis during the recent Toronto Film Festival.

The hotel features 124 luxury suites, or 258 guestrooms in total, plus the hotel lobby, Louis Louix, 12,000 square feet of meeting and event spaces, fitness center and spa with an infinity-edge saltwater lap pool.

The hotel even has a free car service for guests so they can take a ride to local bars, restaurants and attractions.

Not that it was always necessary.

The hotel is in a fantastic location, within an easy walk to the Entertainment District – home to the famous CN Tower – and the charming Steam Whistle Brewing microbrewery, based inside a 1929 locomotive roundhouse along with the Toronto Railway Museum. Queen’s Street, packed with boutiques, galleries and book shops, is just a couple of blocks away while those who want to stretch their legs can take a 30 minute meander to Kensington Market which is buzzing with quirky cafes and bars.

A short cab ride from the hotel can take visitors to the charming, historic Distillery District, or to tour the Casa Loma, a Gothic revival mansion which has been used as the filming location for countless movies including Scott Pilgrim, X-Men, Descendants and more.

And be sure not leave Toronto – which is just an hour’s flight from New York City – without trying Canada’s deliciously carb-filled national dish; poutine.