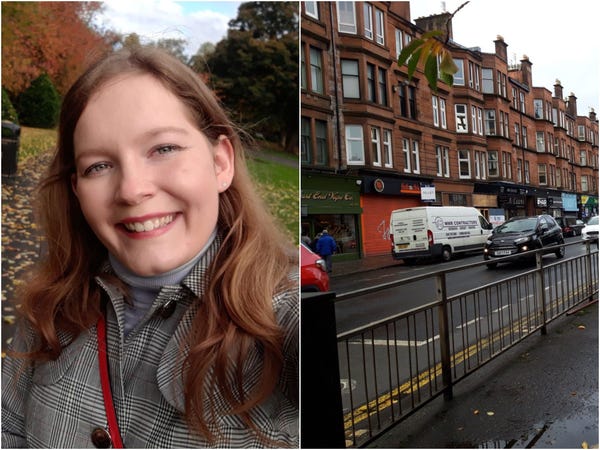 I've called Glasgow, Scotland home for most of my life. But until last week, I had never visited Dennistoun — a neighborhood in the city's east end which was recently named one of the coolest in the world.

Dennistoun came in at eighth place in Time Out's top 40 coolest neighborhoods ranking in early October. The Glasgow district was the highest-ranking area in the UK, beating out London's Soho which came in at 31st place on the list.

"Dennistoun feels like a secluded island in Glasgow's East End," The Time Out article reads. "Over the last decade or so, an influx of young people – mainly students from nearby Strathclyde University – has altered the demographic of this low-key, historically working-class neighborhood. Yet the tide of redevelopment is coming in slow, and its charming blonde and red sandstone tenements remain affordable to most."

I was initially skeptical about the visit since the city's lockdown restrictions meant that all restaurants and bars were closed when I visited on October 23. The area is prided on its good food and nightlife, and businesses have been hit by the COVID restrictions.

Reacting to the news of the ranking, one person wrote on Twitter: "I'm not convinced Dennistoun is the eighth coolest neighborhood in Glasgow, never mind the world," while another wrote: "Confusing coolest with coldest."

After visiting the area for myself, I can't say I'm entirely convinced either.

My first stop was Mesa, a cafe on Duke Street that was recommended in the Time Out article. 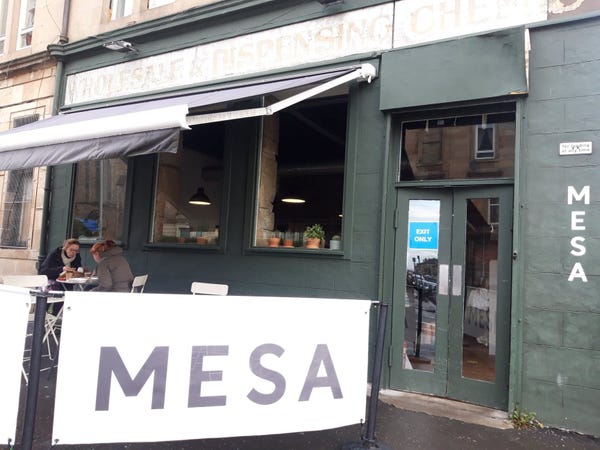 I arrived at Mesa — approximately a 30-minute walk from the city center — at around 9.15 a.m. on Friday morning.

I didn't expect it to be busy at that time on a weekday, but all four tables inside the little cafe were occupied.

The waitress told me that they used to have more tables before the pandemic, but had to reduce the numbers to adhere to social distancing. She took my phone number, and said she'd call when a table became available.

In the meantime, I explored Duke Street, one of Glasgow's oldest and most well-known streets, which runs from the east end to the city center. 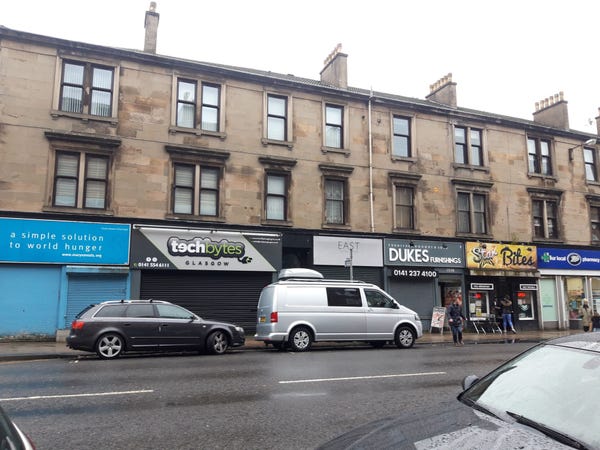 The street was made up of thrift stores, cafes, convenience stores, and hairdressers, most of which appeared to be closed.

While some of these businesses had a later opening time, others appeared to be closed temporarily or even permanently due to the effects of the coronavirus pandemic.

I had received many recommendations for places to eat and drink in the area, but restaurants and bars were closed in Glasgow due to the city's lockdown restrictions. 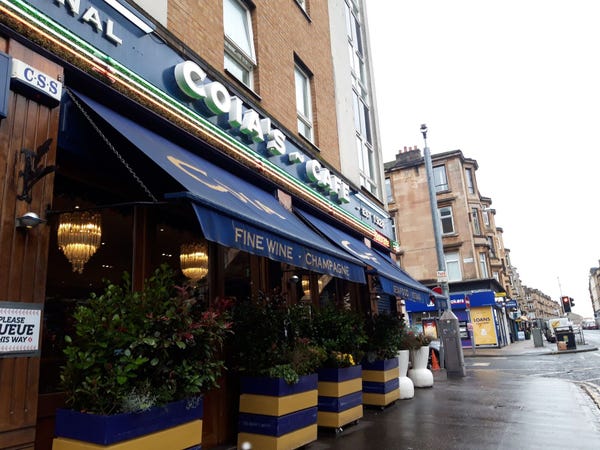 Bars and restaurants that had alcohol licenses were closed when I visited on October 23 as part of the city's temporary restrictions, which was disappointing since I had already received many recommendations for places to dine in the area.

One restaurant that had been recommended to me by my dad (who is a professional chef in Glasgow) was Coia's Cafe on Duke Street, which was closed due to the restrictions. Having opened in 1928, it's one of the area's oldest and most well-known restaurants.

Tibo Bistro and Drygrate Brewery were also places that had been recommended to me that weren't open due to the restrictions.

"Bars are restricted at the moment, Duke Street is usually a hive of activity," one local resident, Angela Bretherton, told me. "It's still somewhat busy at lunchtime, but COVID is having its impact."

The local community was getting into the Halloween spirit. 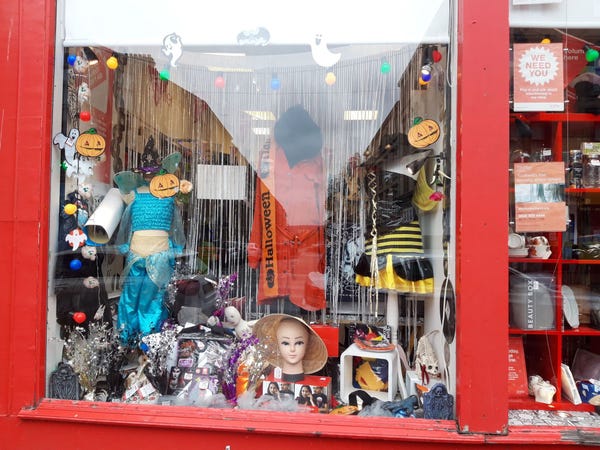 There were a couple of thrift stores that had Halloween themed window displays like this one. I also passed a sign advertising "The Big Dennistoun Pumpkin Trail" which encouraged businesses to place a pumpkin decoration in their window for the children in the area to count.

It was essentially a pandemic-friendly version of trick or treating, in the form of a treasure hunt.

While I loved the community spirit, I have to admit that the neighborhood wasn't impressing me much so far. 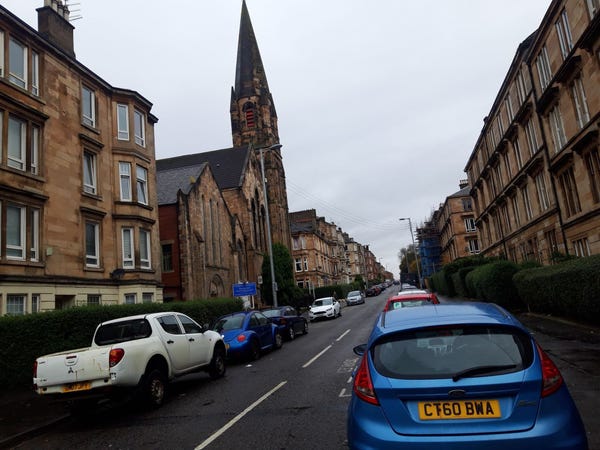 Aside from the cafes and convenience stores, there didn't seem much to do on Duke Street and the nearby streets. 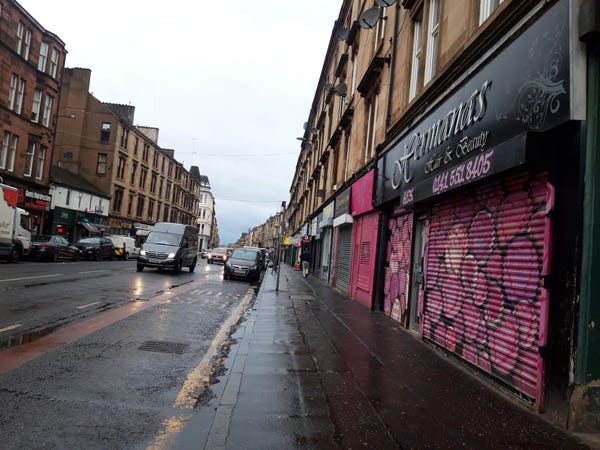 I spoke to one local who believes the neighborhood's popularity is partly owed to the Scottish singer Lewis Capaldi. 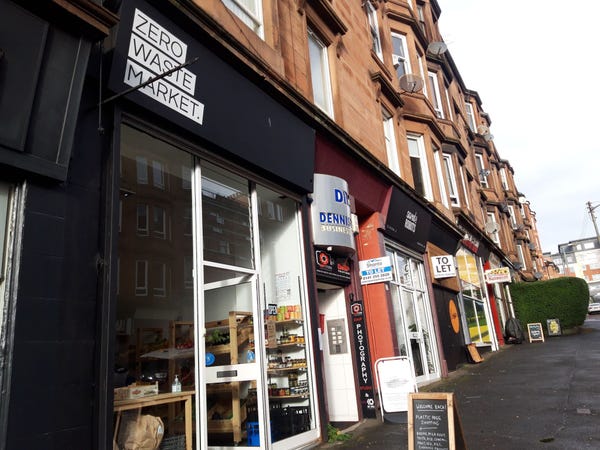 While browsing in Zero Waste Market (a plastic-free grocery store located just off Duke Street) I ended up in conversation with the cashier, who said he had lived in the area for around seven years.

When asked what he thought of the Time Out ranking, he said: "Dennistoun is a cool area — but I don't know about one of the coolest in the world."

He added that the cafes, restaurants, and bars were the best thing about the area, confirming what I was beginning to suspect already.

But one thing I didn't see coming was his reference to Lewis Capaldi.

He said the Scottish singer's reference to the area during one of his Instagram videos last year could be the reason behind its growing popularity.

Capaldi, who is known for his sarcastic sense of humor, joked that he'd choose to purchase a house in Dennistoun over Los Angeles after he hit one million followers on the social media platform last year.

It took 45 minutes before a table was available at Mesa — and it was worth the wait. 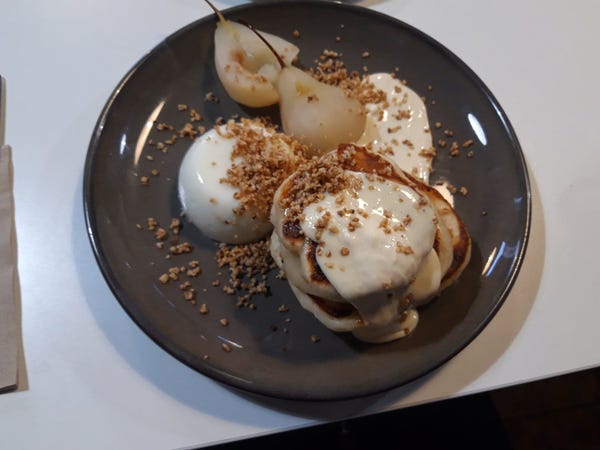 I ordered pancakes with rose water panna cotta, poached pears, mascarpone cream, and toasted almonds ($9) with a pot of tea ($2.59) and it was excellent.

I had waited 45 minutes for a table, but once I was inside it only took only around 10 minutes for my food to be served.

Since the staff and the customers all wore masks (except when seated at a table), I also felt pretty safe.

Next, it was time for a stroll in Alexandra Park, a 10-minute walk from Duke Street. 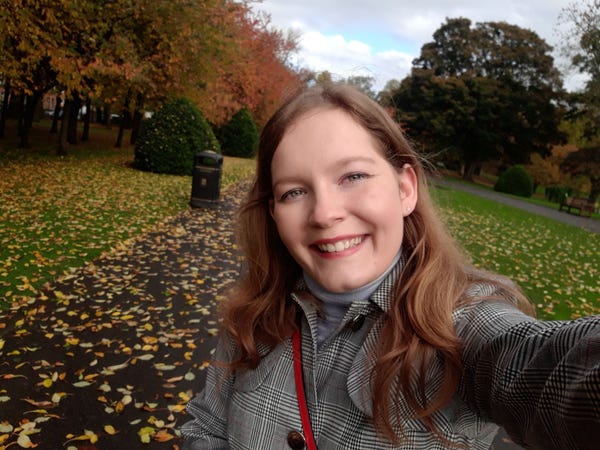 The first thing I noticed about the park is that it was pandemic friendly — and by that, I mean there were plenty of signs urging new arrivals to keep to the left and to maintain a two-meter distance from others.

The park advised no public gatherings of more than two people at a time. 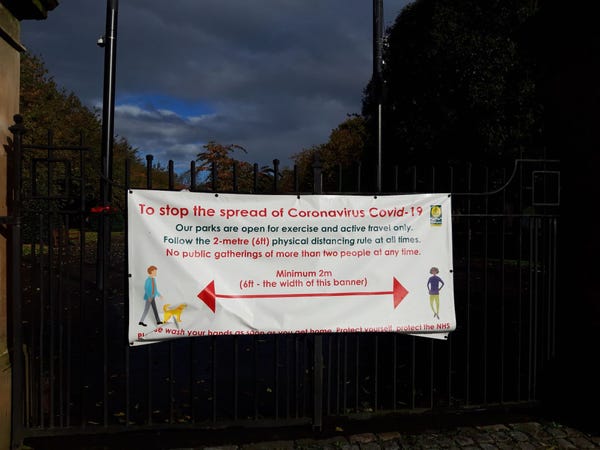 It was the first time I had seen a park set out a rule as specific as this during the pandemic.

But like Duke Street, the park appeared reminiscent of a ghost town. 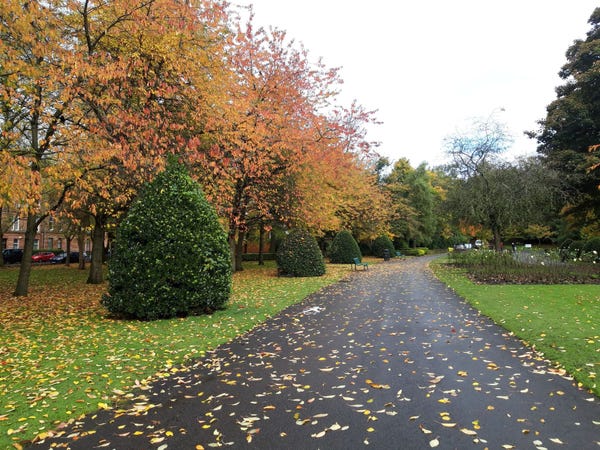 While the park was quiet when I visited, I know it isn't always.

According to Time Out, "locals of all backgrounds meet to plant and grow for a more sustainable future" as part of the park's Food Forest initiative. I was starting to see that the community spirit is a common theme in this neighborhood.

The park also had a fountain and a lake, making for a nice change of scenery.

By early afternoon I arrived at Alexandra Parade. 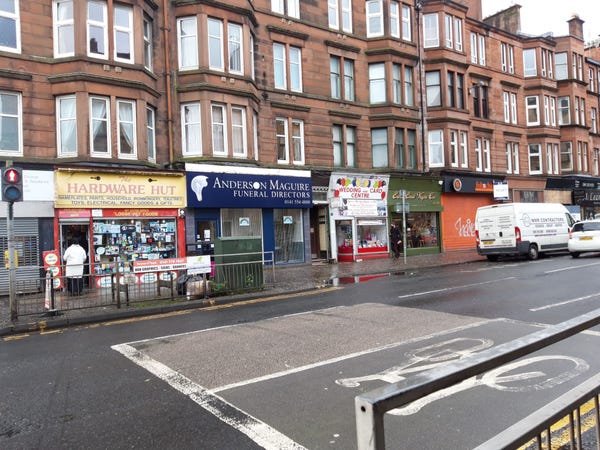 Alexandra Parade had been recommended to me by a couple of the locals, but I have to admit that I wasn't too impressed.

With a hardware store, funeral directors, and convenience stores, it appeared just like any other high street.

This business deserves an award for its creative advertising. 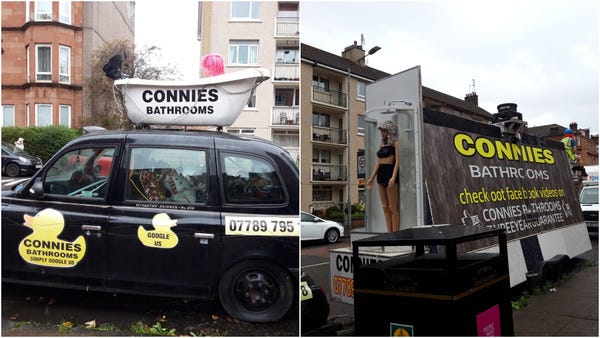 It's not the strangest thing I've seen in Glasgow, but perhaps one of the most creative.

As I was getting ready to leave, I passed the cafe Scran to see customers waiting in line. 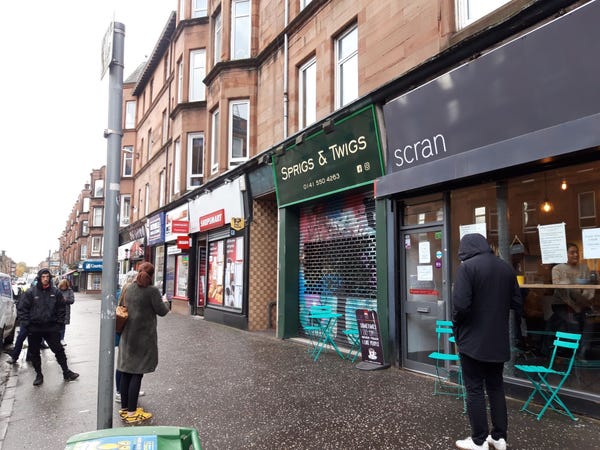 The cafe Scran — named after the Scottish slang word for food — had a long line outside of it when I passed at around 12.30 p.m.

Although I'm sure social distancing regulations and the closure of restaurants played a part, I still think it's rare that this was the second cafe I had come across that had a line outside of it on a weekday. It's even more unusual when you take into account that the rest of the area seemed pretty quiet.

During my visit to Dennistoun, it was clear the neighborhood is unmatched when it comes to both the food industry and the sense of community spirit.

That being said, I don't think these things are enough for it to be named one of the coolest neighborhoods in the world. Especially when you consider the perspective of visitors like myself, who are not part of the community but want to visit for a day.

I have to be honest — I doubt I'll be returning to Dennistoun for anything other than a quick bite to eat.