From a DC3 propeller plane to seats with ultra-high-definition TV screens: Fascinating images show how airline Cathay Pacific has transformed over the past 75 years

Cathay Pacific has put in a good shift and it’s still going strong, as these fascinating images show.

They chart how the Hong Kong-based airline has been transformed over the decades as it celebrates its 75th anniversary.

They document how its operation began in 1946 with a DC3 propeller plane, its first physical reservation office in 1948 in the iconic Peninsula Hotel, Hong Kong – and then how it became a pioneer of the jet age, flying Convair 880s, 747s and lately Airbus A350s.

‘We have also experienced unprecedented challenges, such as the global pandemic, which we are all still overcoming. What these over seven decades have shown is that we are a resilient brand.’

Scroll down for a time-warp journey in pictures through Cathay’s remarkable history. 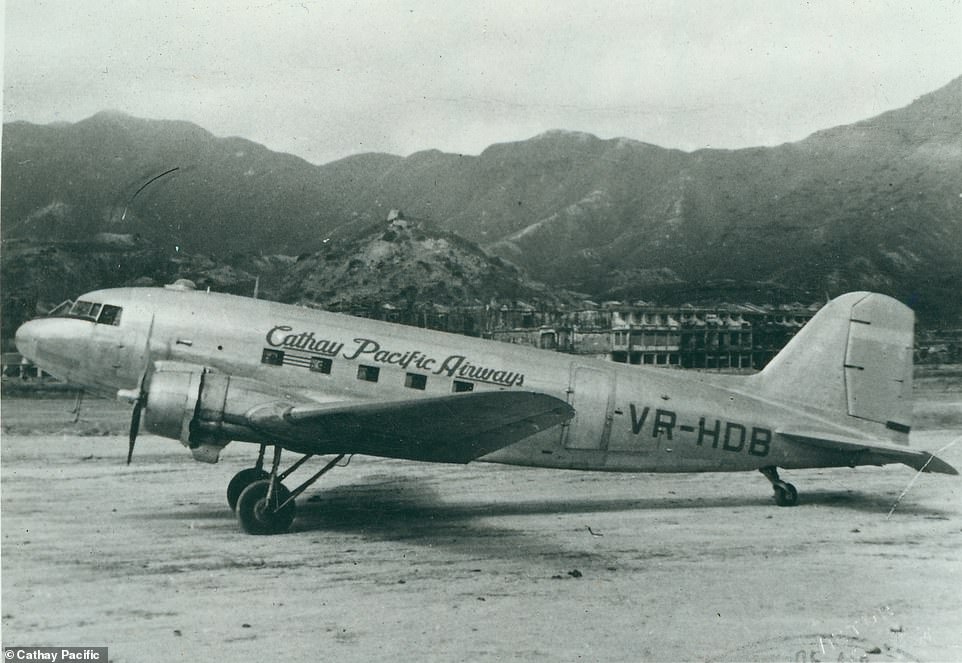 In 1946, the Cathay Pacific inaugural flight between Sydney and Hong Kong was performed by the airline’s first aircraft, a DC3 propeller plane with the registration VR-HDB (pictured at some point in the 1950s), affectionately known as Betsy 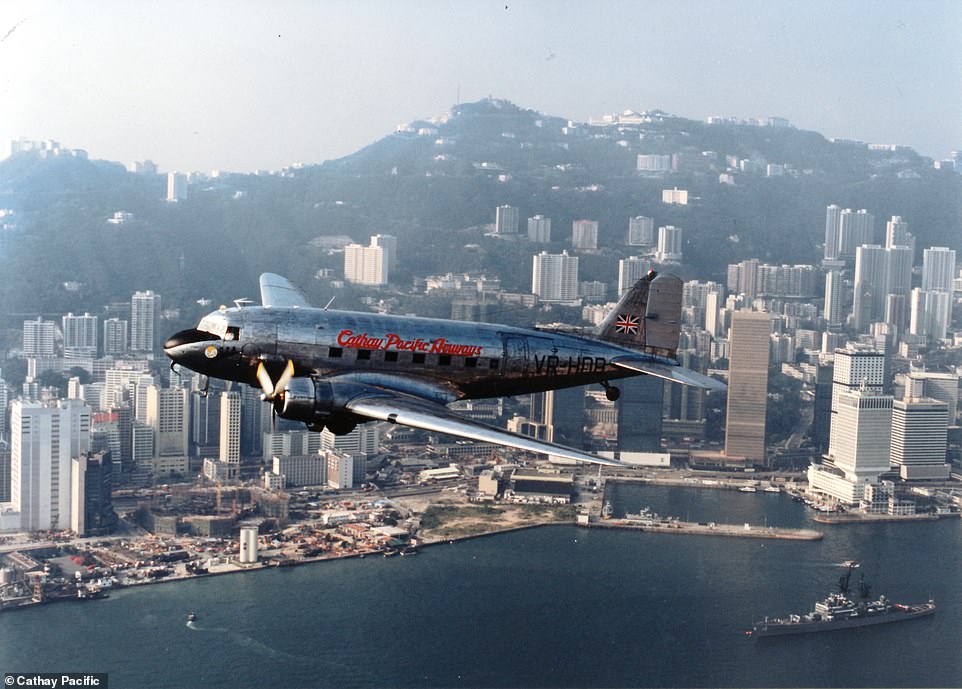 The original Betsy was restored and flown back to Hong Kong in 1986 (pictured) by Sir Adrian Swire, the airline group’s then chairman. Betsy is now preserved as an exhibit at the Hong Kong Museum of Science & Technology 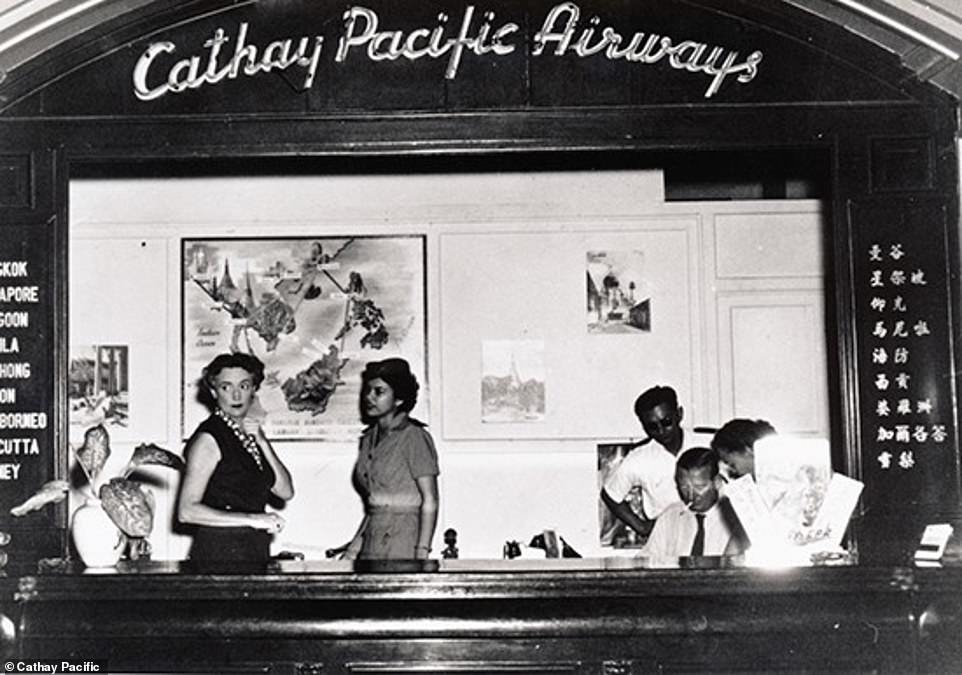 The first physical reservation office for Cathay Pacific was located in the lobby of the iconic Peninsula Hotel, Hong Kong, and was open for business by 1948. As seen in this photo, the passenger network at the time was visible on the shopfront – Bangkok, Singapore, Rangoon, Manila, Hong Kong, Saigon, Borneo, Calcutta and Sydney. Today, passengers can fly with Cathay Pacific to more than 100 destinations across six continents. Customers also no longer must visit a reservations office, as tickets are bookable through WhatsApp, in addition to the website, app, telephone or travel agents 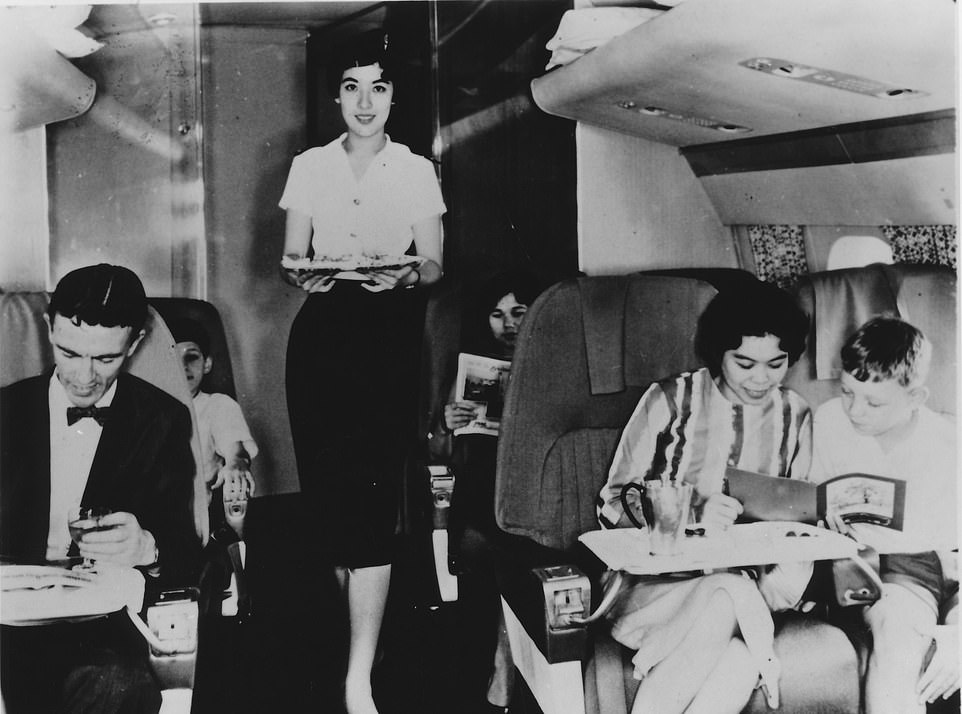 Hot drinks, soups, hot meals and ice creams were available on flights in the 1950s on propeller aircraft 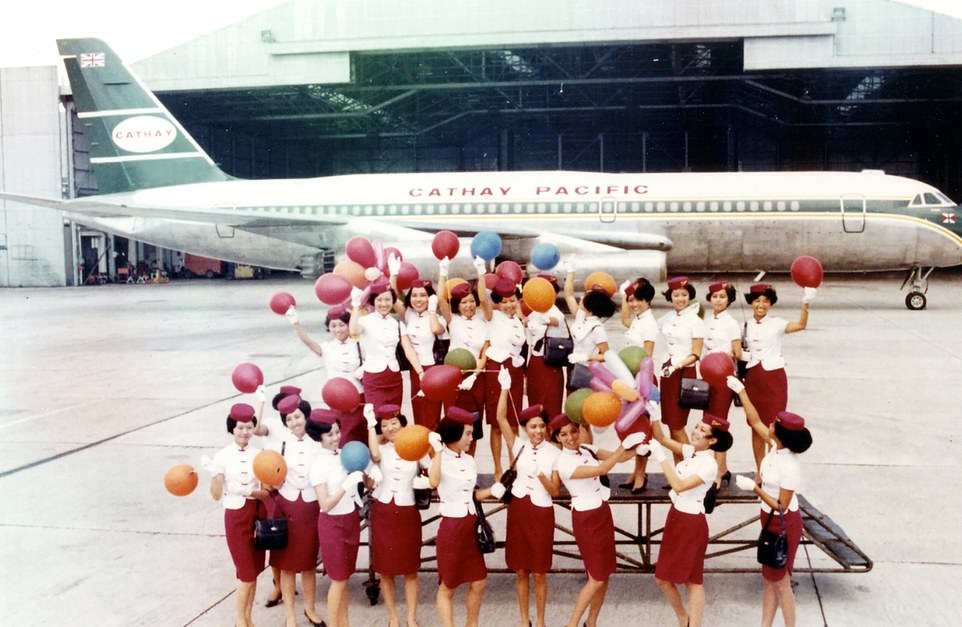 This photograph was taken in 1962 at Kai Tak Airport, Hong Kong, in celebration of Cathay Pacific’s entry into the jet age with the Convair 880 (seen here in the background). Prior to this point, all Cathay aircraft had been propeller planes. In the 1960s, Cathay bought nine Convair 880s, enabling regional network expansion in Asia Pacific and paving the way for further global expansion in the 1970s and 1980s, with the arrival of the 747 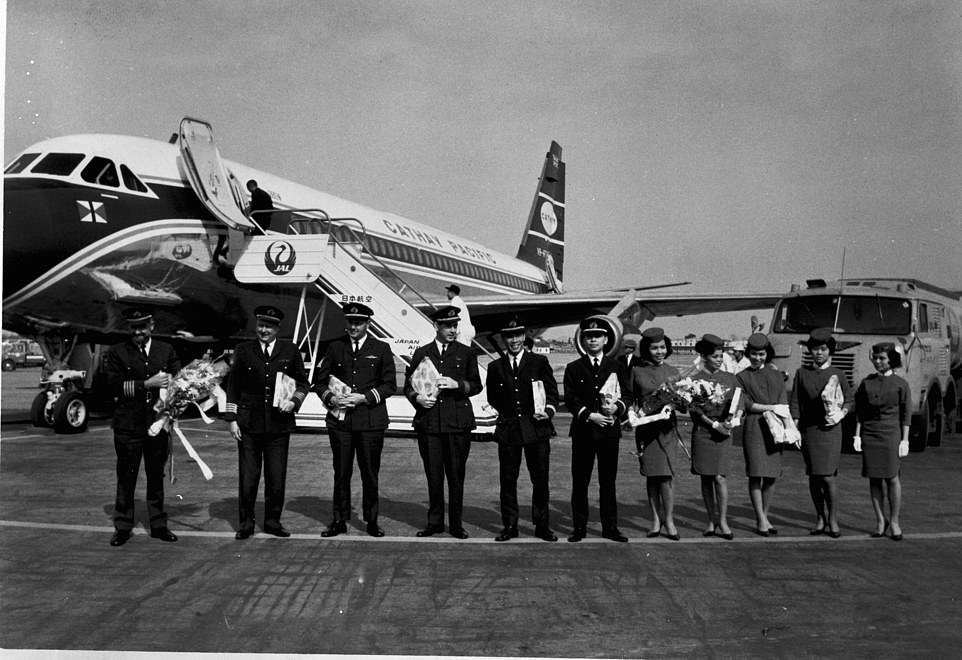 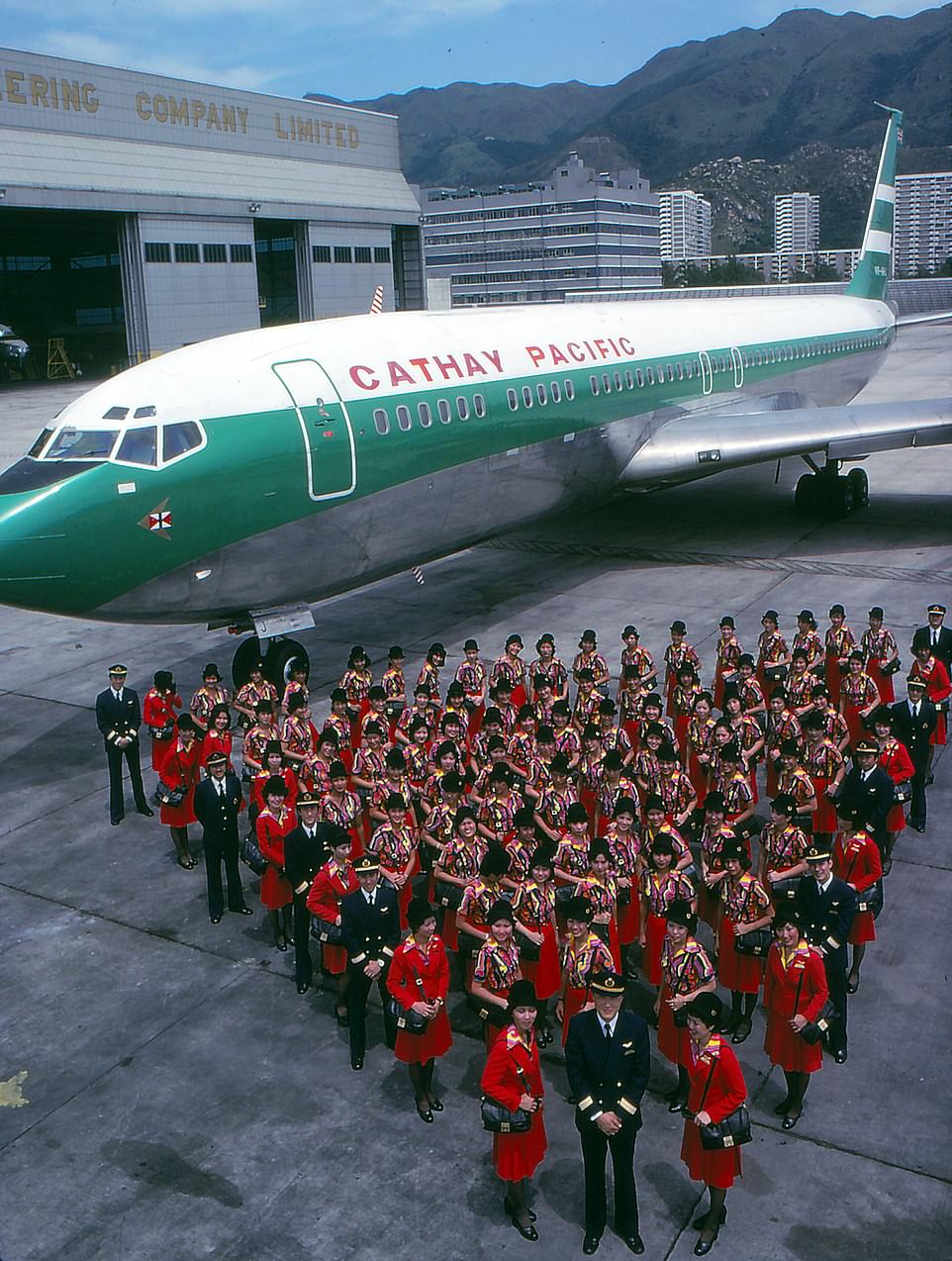 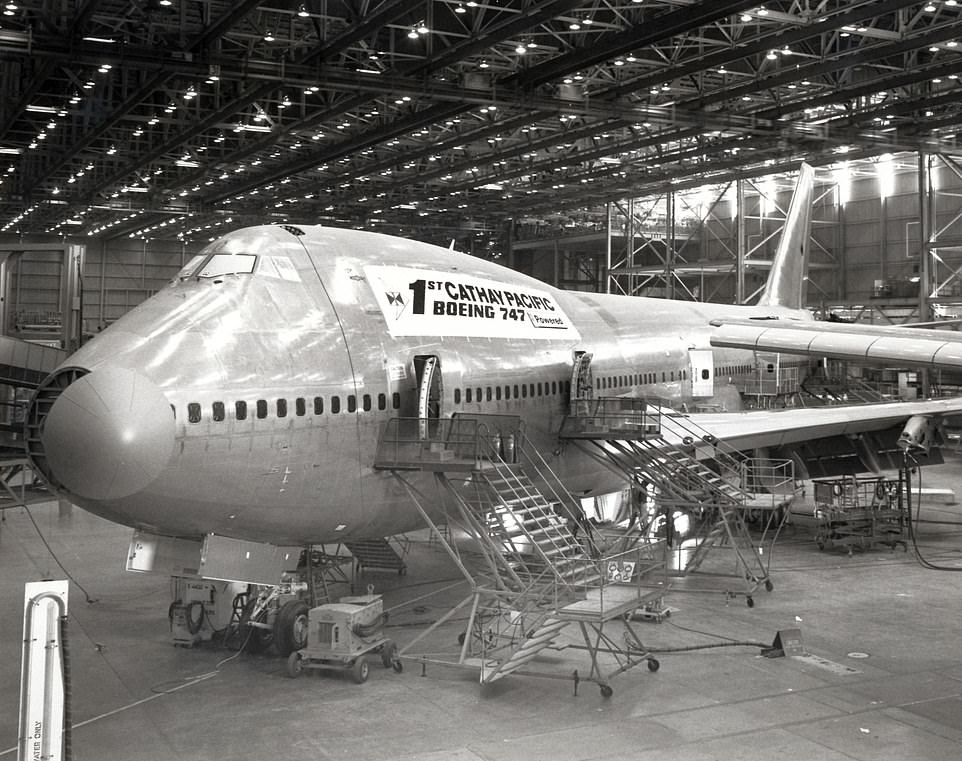 In 1979, the iconic 747 was introduced to the Cathay Pacific fleet for the first time 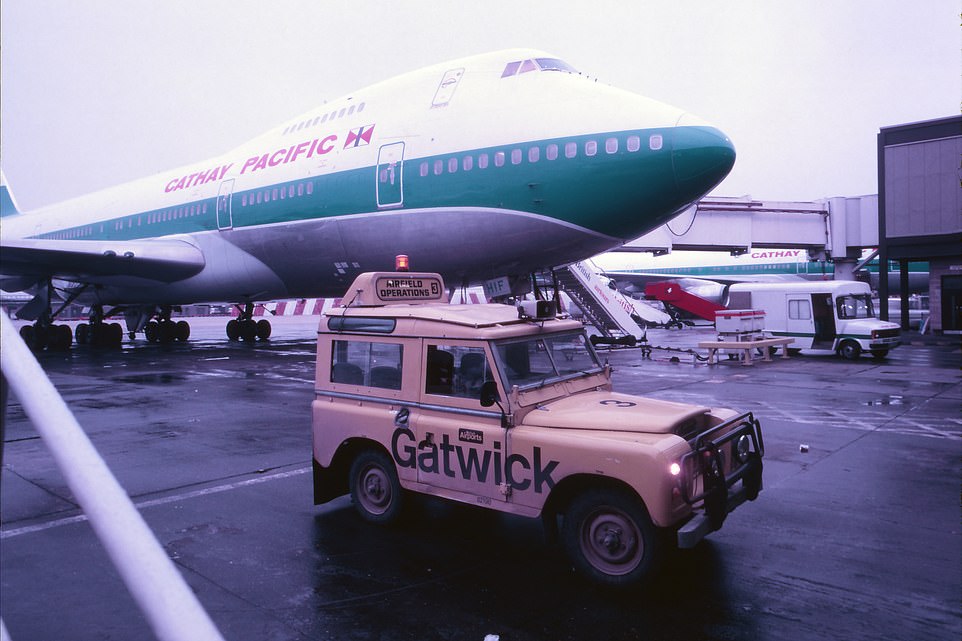 Cathay Pacific’s expansion continued throughout the 1980s. In 1982, it introduced Cathay Pacific Cargo, which provided a cargo service to ingratiate the trend of Hong Kong becoming one of the largest re-export trading ports in the world 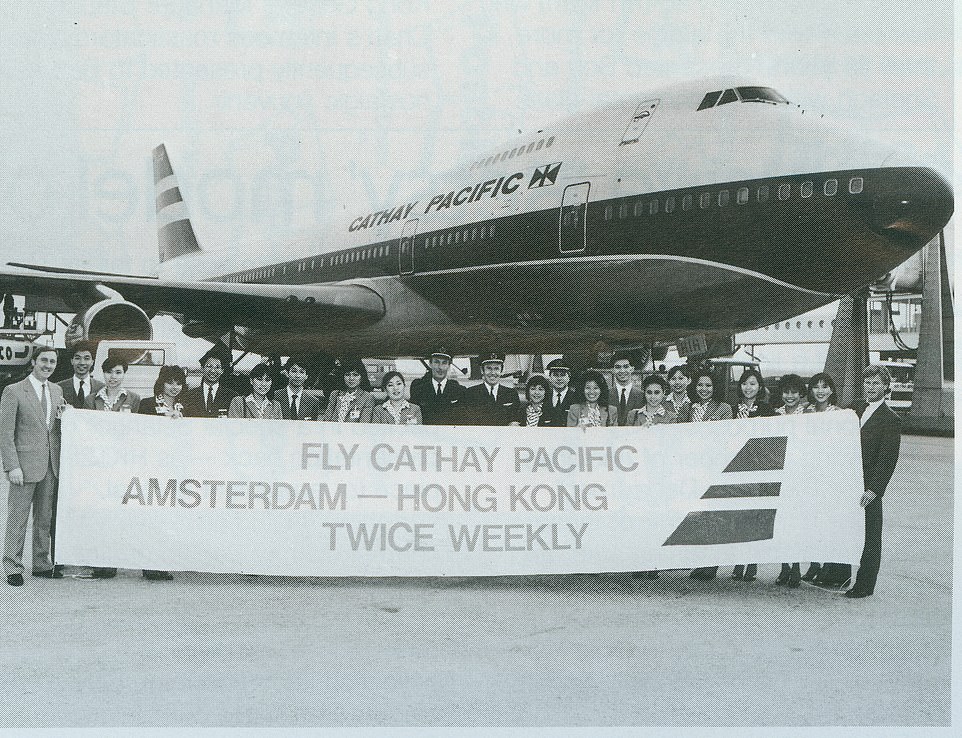 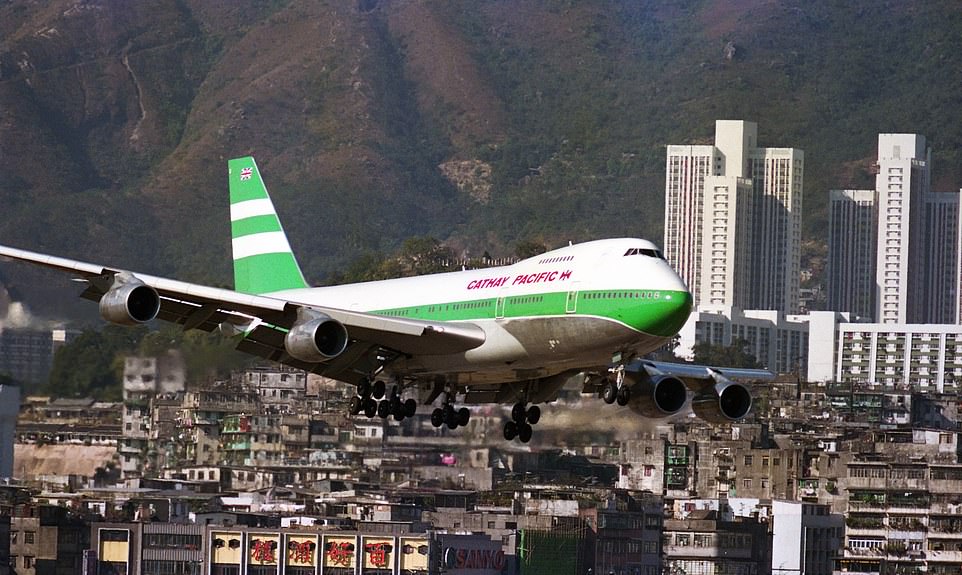 With Hong Kong being Cathay Pacific’s home hub, its Boeing 747s landing in one of the most extreme airports in the world – Kai Tak – constitute some of the most iconic civil aviation images of all time. Pilots landing at Kai Tak (above before it closed in 1998) required special certification and training. With Cathay pilots performing the demanding landing day in, day out, they were often regarded as some of the most skilled pilots in the world, mastering one of the world’s most complex approaches – including a 47-degree sharp turn and flying a few hundred feet above apartment blocks before landing on a runway susceptible to crosswinds 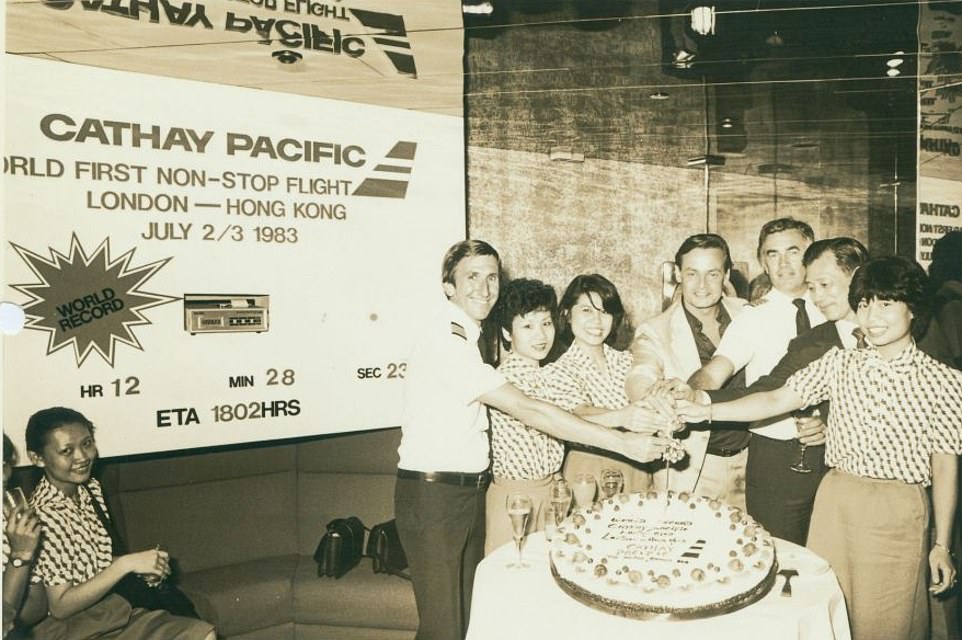 Cathay Pacific launched its London service in 1980. At the time, due to technology limitations, every flight with every airline required a fuel stop between London and Hong Kong. Just three years later, in 1983, Cathay Pacific engineers worked closely with engine manufacturer Rolls-Royce to overcome the technology barriers and became the first airline in the world to operate a non-stop flight between London and Hong Kong, breaking a world record at the time. This world-record-breaking London to Hong Kong flight ‘was made possible by Cathay engineers’ can-do spirit’, the airline said. Their modifications to the RB211-524C2 engines gave the Jumbo greater range and enhanced fuel efficiency. The airline’s then Engineering Director, Stewart John, said: ‘Rolls-Royce were suitably impressed with the new RB211-524D, and asked Cathay to do three engines for them afterwards.’ In the celebratory image above, the then chairman of Cathay Pacific, Peter Sutch, is in the middle of the group 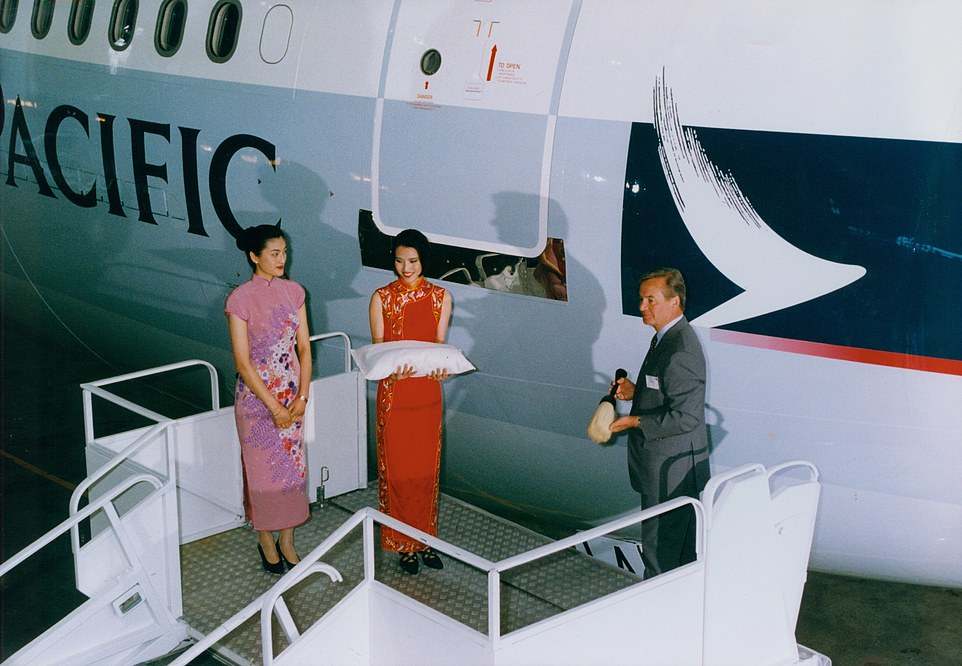 The old ‘lettuce sandwich’ logo made world-famous by the Kai Tak landings evolved into the brand new ‘brushwing’ livery, which was unveiled for the first time on the then brand new Airbus A330 in France. Cathay Pacific said: ‘The iconic brushwing simulates the wings of a powerful bird in flight, whilst the calligraphy reflects Cathay Pacific’s heartfelt service ethos’ 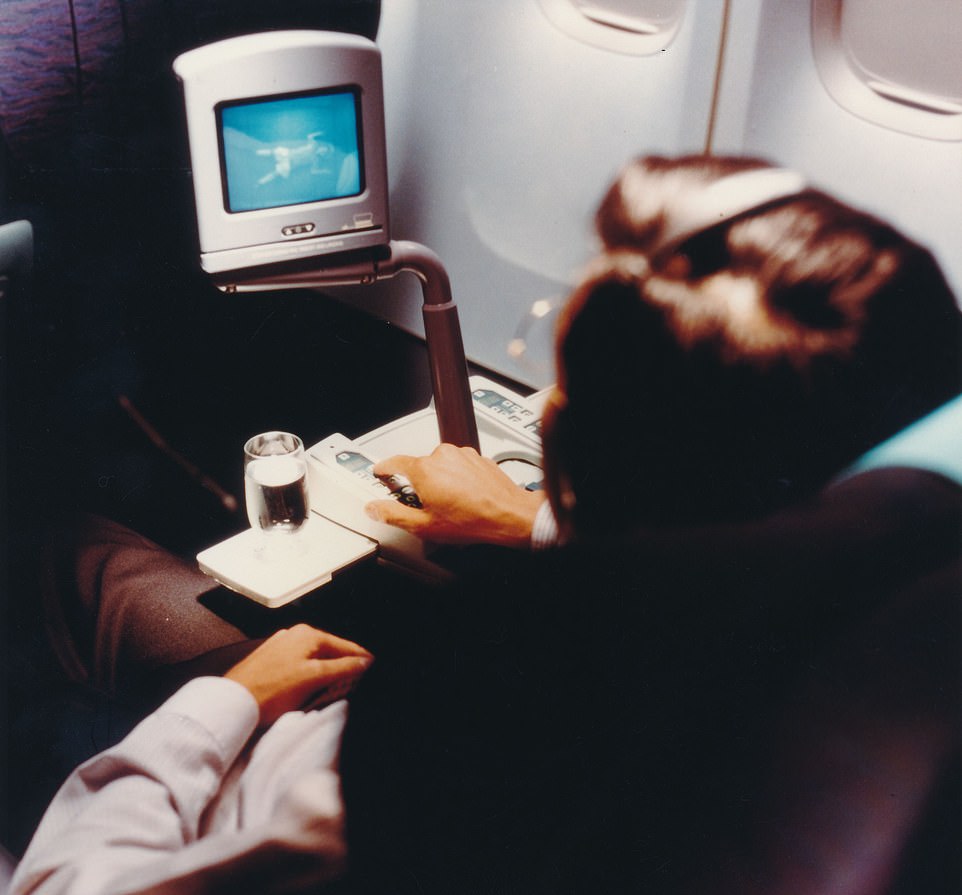 On the 18th Boeing 747 delivery, in the armrest of every new-era business class seat was a small personal TV, giving passengers the option to watch six channels on the entertainment system, which featured ‘non-stop movies, magazine-style documentaries and video clips’ including ‘the best Mandarin, Cantonese and Japanese movies’. Cathay Pacific was among the first to introduce on-demand Nintendo games onboard in 2004 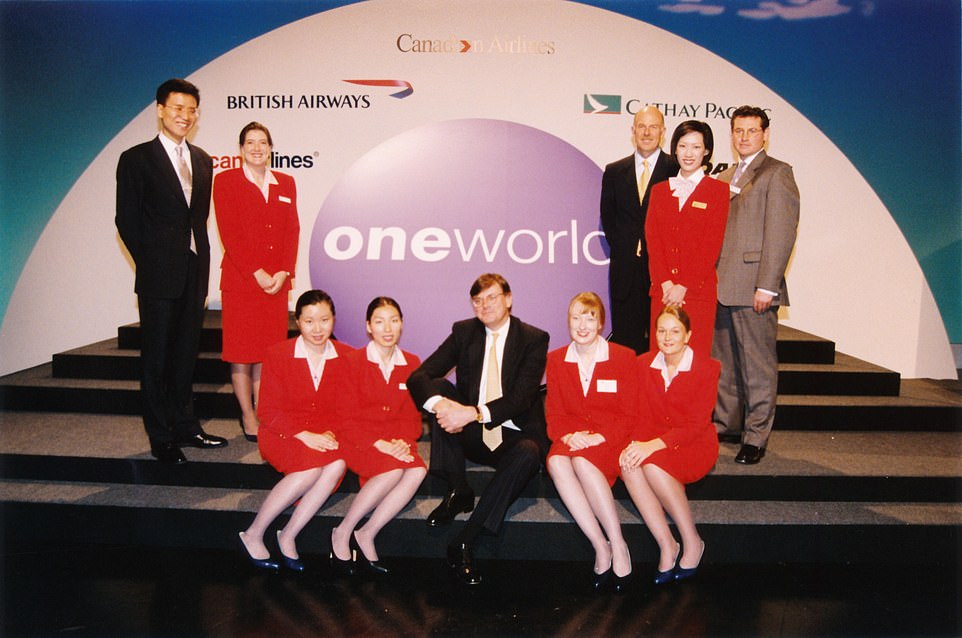 Cathay Pacific is the founding member of the Oneworld airline alliance, alongside British Airways, American Airlines and Air Canada. This 1999 publicity image was taken in London for the announcement. To the far right is Paul Cruttenden, the Cathay sales manager in London at the time 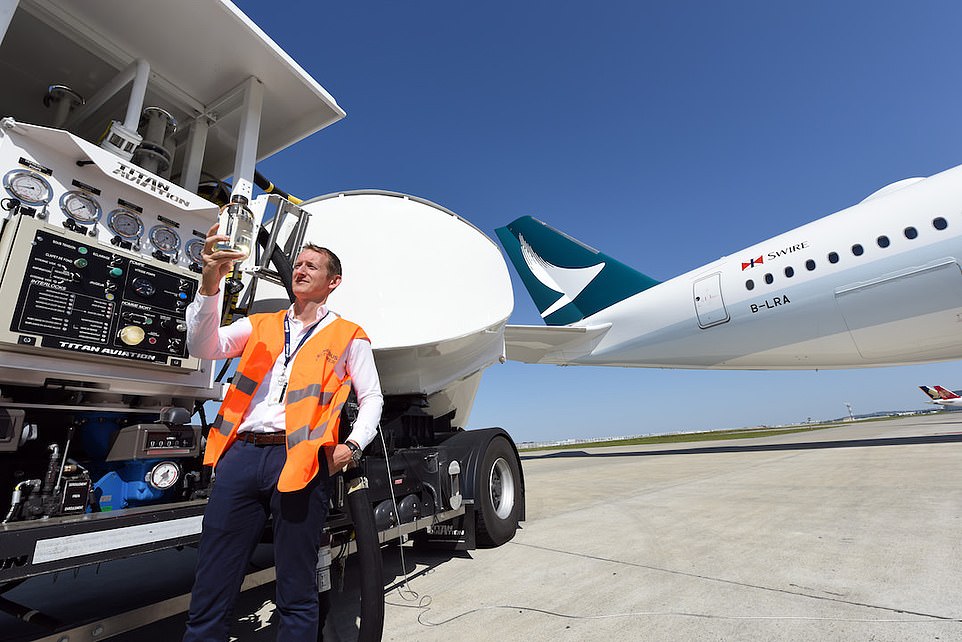 Cathay Pacific was the first airline to invest in the biofuel manufacturer Fulcrum in 2014. In 2016, Cathay Pacific’s newest Airbus, an A350-900, performed the world’s longest flight, from Toulouse to Hong Kong, using a blend of biofuel 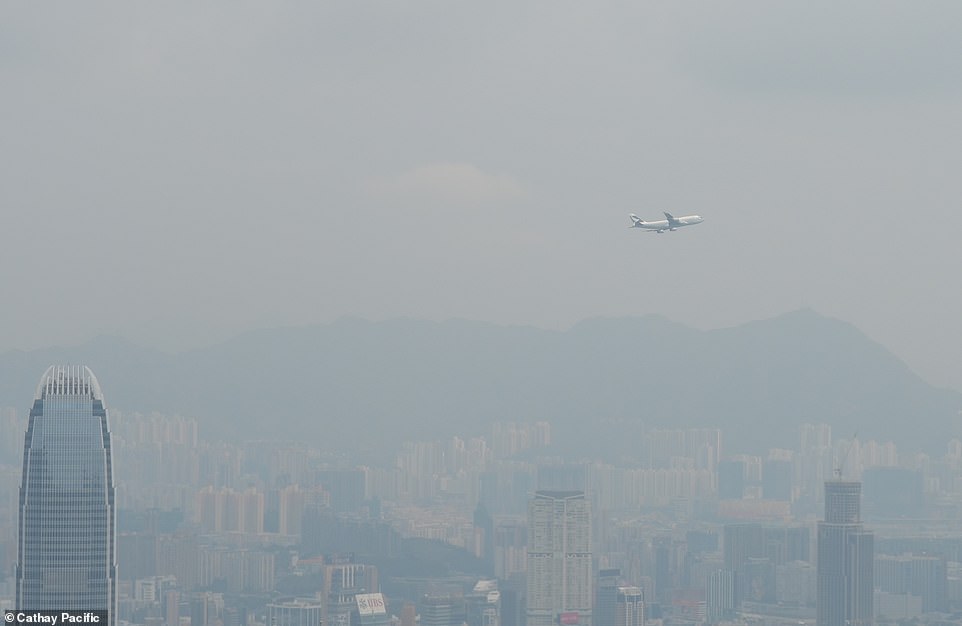 Cathay Pacific retired its entire passenger 747 fleet in 2016. The last to join this fleet and the last one to go was B-HUJ and it was sent off in style, a round-trip charity flight from Hong Kong that included flying low over the city’s Victoria Harbour (pictured), with a wing-wave over the iconic Kai Tak Airport. On board were staff dressed in 1980s uniforms. They all paid a donation of HKD747 (£70/$95) for the privilege and all the proceeds went to FlyPink, a Cathay initiative to benefit breast cancer research 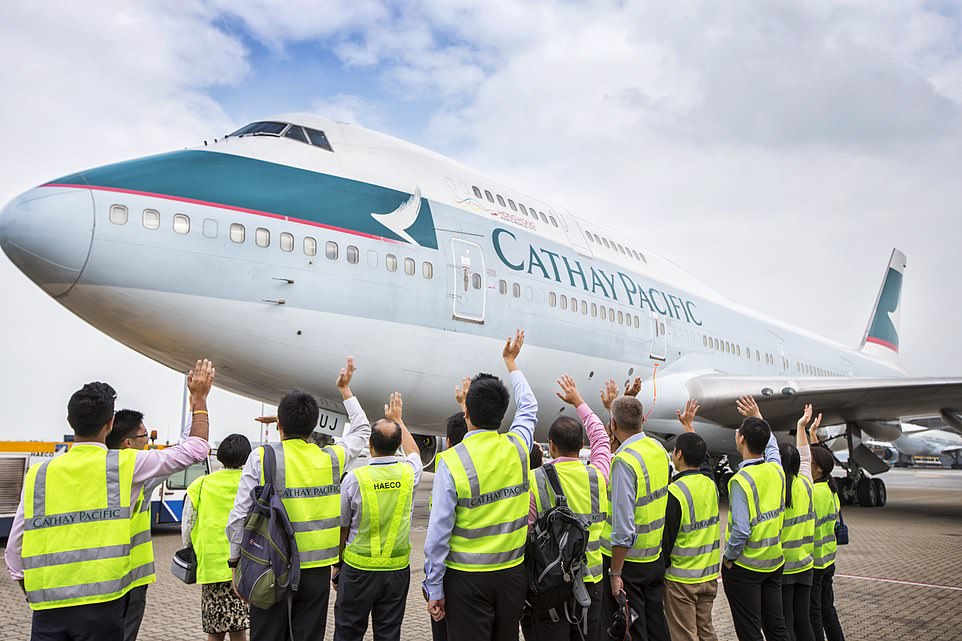 Goodbye, Queen of the Skies: Cathay engineering staff are seen here in 2016 at Hong Kong International Airport sending off 747 B-HUJ on its final journey to Bruntingthorpe, England, for scrapping and recycling. Ninety-per-cent of the aircraft materials were salvaged, with some turned into 75th-anniversary memorabilia and merchandise

In 2016, to celebrate the arrival of the Airbus A350 and the company’s 70th anniversary, Cathay recreated its Convair 880 publicity shot from the 1960s at Hong Kong International Airport Chek Lap Kok. In the middle of the front row is the airline’s hitherto longest-serving member of staff, Maria Chow, who at the time had 50 years of service 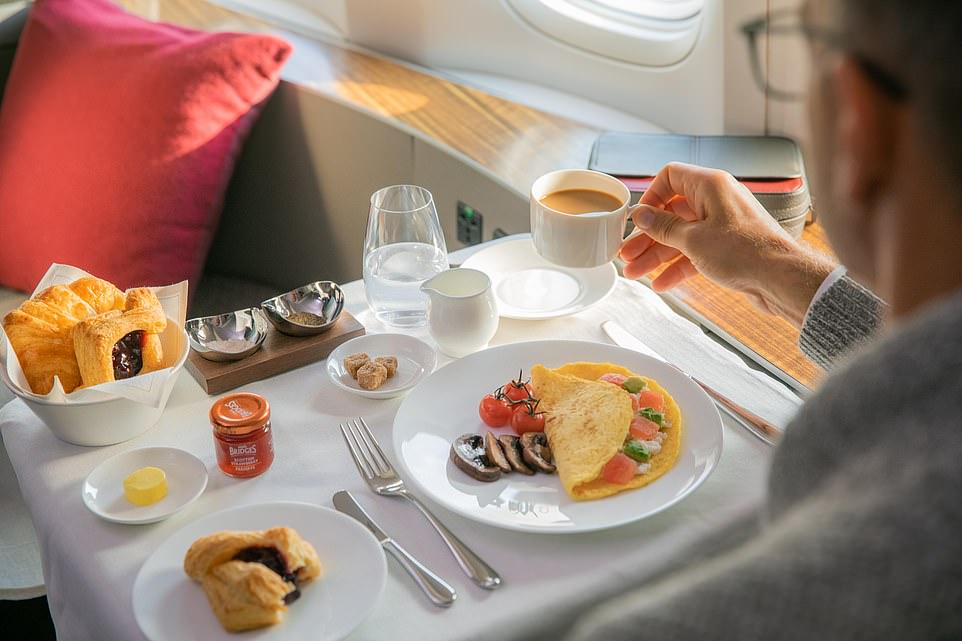 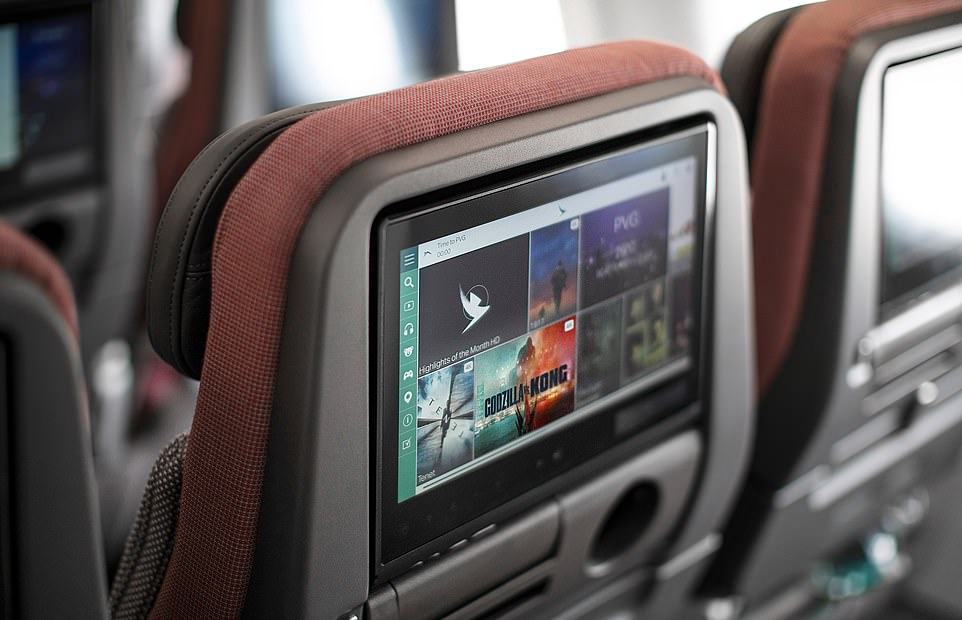 Cathay Pacific in 2021 became the first airline in the world to offer 4D UHD personal TV screens, on its newest Airbus A321neo