The arena was filled with raucous spectators who, in tiered seating, surrounded the wrestling pit below. Camels were paraded in and out of the ring, dolled up in their best regalia, their elaborate saddles noting their names, origins and their trainers or owners. 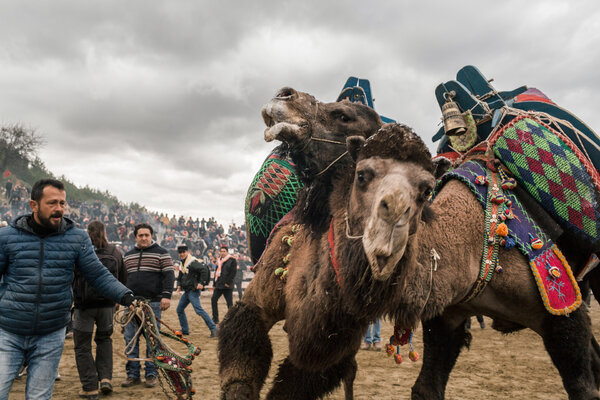 Held in mid-January on Turkey’s Aegean coast, the annual camel-wrestling festival near the town of Selcuk almost overpowers the senses. When I attended the event in 2017, sausages sizzled on stalls surrounding the arena; old men chain-smoked cigarettes while sipping down beer or raki, a traditional Turkish drink made with aniseed. There was the low din of chitchat, the occasional collective gasp and, of course, the smell of damp camel’s hair and excrement. (The festival was canceled this year because of the coronavirus pandemic.)

Camels naturally wrestle in the wild, and staged matches aren’t allowed to get too boisterous. A camel wins by making its opponent scream, fall or retreat, and trainers remain close at hand to ensure neither party is injured. Winners are rewarded with a mass-produced Turkish carpet, and, despite betting being illegal, low-level wagers often take place between fans, either in the form of a few drinks or a few Turkish lira.

Well suited to desert conditions, camels were used in medieval times as pack animals along the Silk Road. They’re still used by nomadic tribes in much of Central and South Asia — in Afghanistan, Pakistan and Iran. Occasionally they’re still used in Turkey.

With a legacy rooted in ancient Turkic tribes, the community of Turkish camel owners, trainers and dromedary lovers is still vibrant and competitive. But the festival has become something of a niche expression in modern Turkey. These days, it seems to be as much about socializing, gossiping and drinking as it is about the camels battling it out in the sand.

As a former camel owner myself (more on that later), I was particularly eager to attend the festival since moving to Turkey almost a decade ago. Hip young Istanbul friends moaned that the practice was an obscure and mawkish event, similar to Turkish oil wrestling, something that only tourists know or care of. To my surprise, though, the spectators were almost all Turks.

The camel men are a lively bunch and care deeply about their animals. Several trainers, such as Yilmaz Bicak, slept with the camels overnight in a barn on the outskirts of town, to ensure their well-being and deter thieves.

The animals used in wrestling events are known as Tulu camels — a breed that results from mating a Bactrian (two-humped) camel with a dromedary (one-humped) camel — and are bred specifically for the competitions.

The camels wrestle once a day, and each match lasts around 15 minutes — again, to protect the animals’ welfare. Before entering the ring, the male camels are brought close to a female camel, but the animals are not allowed to touch, resulting in a sexual tension which the trainers say provides the males with extra strength.

Camel wrestling has fallen in and out of favor over the years. Largely discouraged in the 1920s, the practice saw a rebirth in the 1980s, as interest in Turkey’s traditional cultures grew.

More recently, the events have come under criticism by animal rights activists, who persistently claim that the event can be harmful to the camels.

As for my camel story: Back in 2007, as a young and carefree backpacker, I spent several months traipsing through Syria, my heart set on exploring the barren lands and ancient archaeological sites in the east of the country. Along the way, I bought Alfie, a gracious and handsome dromedary camel.

I’d initially planned to ride to Petra, in southern Jordan, but, shortly after reaching Damascus, I struggled to obtain paperwork for Alfie to cross the Syrian-Jordanian border. Alas, Syrian bureaucracy prevailed, and, after declining an offer from a Russian circus visiting Damascus, I was forced to sell Alfie to a Bedouin family. (Alfie has since been renamed Bradley and, last I heard, continues to roam the eastern Syrian desert.)

As the festival draws to a close, the stall holders selling photos, calendars, videotapes and general camel paraphernalia pack up for the year. The animals are loaded up onto large trucks and driven back to their corner of the Aegean region, or further afield, to prepare for the next set of competitions.