Low prices, few tourists and glorious beaches – Sri Lanka is finally back on the holiday map after an almost total tourism shutdown

Seldom has so little money been spent by so few to gain so much luxury as Sri Lanka now offers.

With the British Government now giving a green light for travel to the country, tourists are being offered unprecedented bargains following the almost total tourism shutdown earlier in the year due to fears about riots and food shortages.

Those fears appear to have been over-stated and short-lived.

I have just spent two weeks in Sri Lanka, a country I have always loved, and was amazed by what I found. As one tourist chief put it: ‘This is the only country in the world which deals with revolutionary anger through flowers, friendliness and good nature.’ 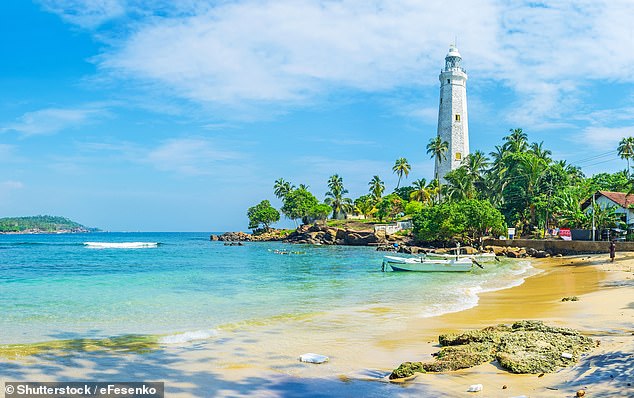 Mary Wales says there are unprecedented bargains to be had in Sri Lanka as it welcomes British travellers back following an almost total tourism shutdown earlier this year. ‘Sri Lanka always offers unlimited sunshine and friendliness,’ she says. Above is the coastline of the sunny town of Dondra

Indeed, the friendliness is perhaps even more evident than before the corrupt government began to destroy the economy.

What’s more, Sri Lankans are delighted Britain has its first British Asian Prime Minister. ‘We hope Rishi comes here and that he sends us more tourists,’ said the manager of Lakshmi Jewels, a boutique in Galle, the delightful former Portuguese fort town 40 miles west of Tangalle.

It’s certainly easier to come here compared with India, where UK citizens now need three weeks and must turn up in person at a consulate to get a tourist visa. To enter Sri Lanka, you get your digital visa in 36 hours. 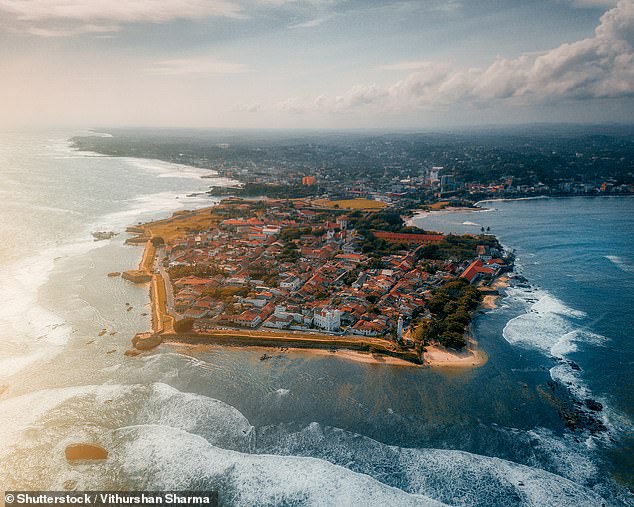 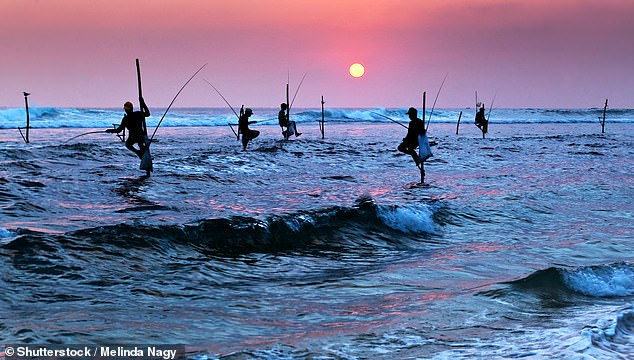 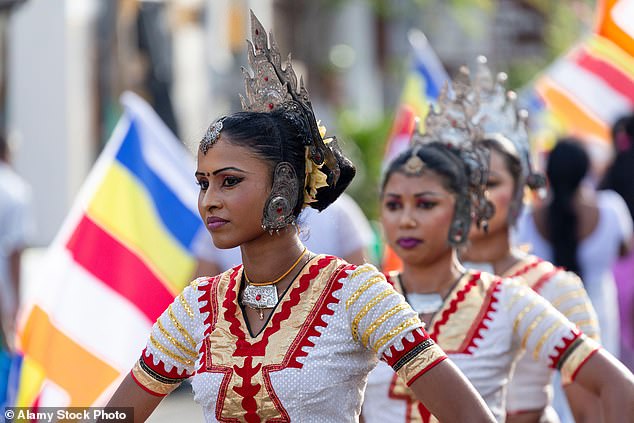 A dancer in traditional dress at a Buddhist festival in Galle

Go now and you’ll find many hotels are near empty, most running at 10 per cent occupancy, but bookings are slowly rising.

The most luxurious hotel in the south of Sri Lanka, the Peace Haven Anantara, near Tangalle, heroically kept on its 340 staff including sushi and Italian chefs. Peacocks still parade on its lawns and giant monitor lizards soak up the sun. You can bag a room here for around £239 a night in January and February.

Tangalle’s glorious beaches are deserted. Small bars offer grilled lobster for £15. It is an incredible bargain time for Western travellers.

The cost of a shirt being tailored at Numesh Tailors is £3; a pair of linen trousers at Sanu Fashion costs £9. Fresh papayas and pineapples are offered as complimentary desserts. 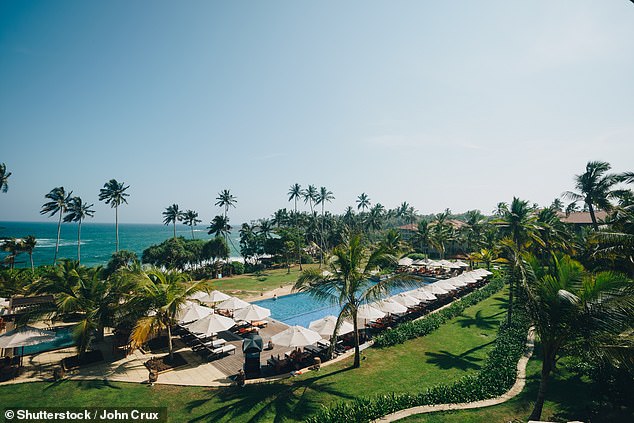 Pictured is the ‘most luxurious hotel in the south of Sri Lanka’, the Peace Haven Anantara, near Tangalle 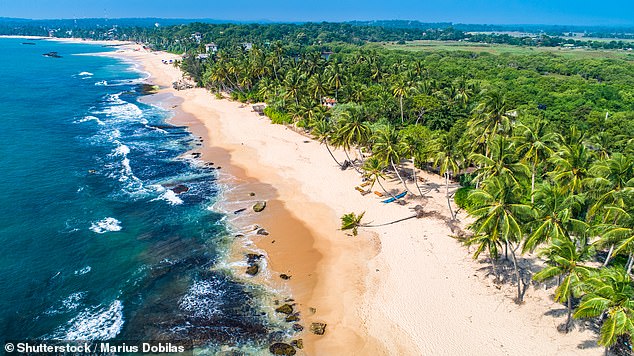 But there’s no question that many hotels and shops are struggling. Some guest houses have closed. In Galle, there is a trail of motley backpackers with only a few higher-spenders hitting the shops or the somewhat eccentric maritime museum.

The hunger for tourists is intense even in this laidback seaside town. Delicious curry and a Lion beer is just £10 at The Spice Chest restaurant.

The Amangalle, the chic boutique-chain hotel with its white-uniformed staff, has dropped rates by as much as 30 per cent off its peak time prices.

Jenny Hope, a retired teacher from Sheffield is a rare British middle-class traveller, enjoying her £40-a-night room at the Parawa guest hotel. ‘I can get a thali meal for £8 and a ten minute tuk-tuk taxi for £1. It is safer and sunnier than any town I can name in Yorkshire,’ she says. 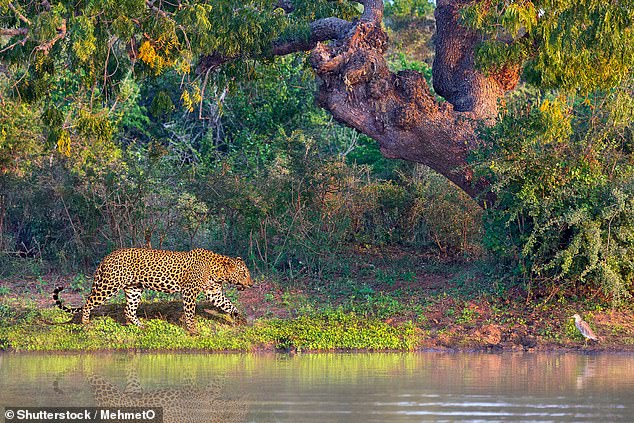 After two days of spa and sand at the Peace Haven hotel, we headed to Yala national game park on the south-east coast hugging the Indian Ocean, near Hambantota. To seek the rare indigenous leopards is like visiting Kipling’s Jungle Book with its dense green terrain, waterholes where elephants, wild boars and peacocks cool down, and trees where monkeys chatter and swing. And, at the moment leopards outnumber tourists.

Before flying back from the capital, Colombo, we stayed a night at The Wallawwa hotel, just 15 minutes from the airport. 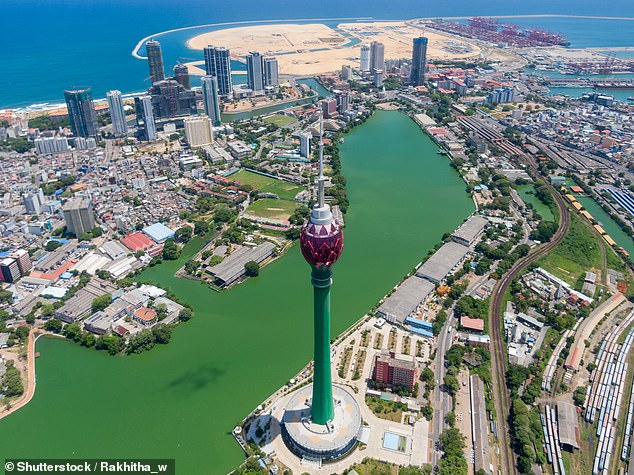 Mary flew back to the UK from the Sri Lankan capital, Colombo

This peaceful country house is the perfect antidote to airport hell. Rooms are going for £180 per night, which is a little bit more than pre-pandemic because taxes have risen due the economic crisis, but it’s still lower than in comparable hotels in places such as Mauritius.

Sri Lanka needs tourism like never before. Its people are suffering. The good news is that the Foreign Office no longer advises against visiting this beautiful country and Sri Lanka has dropped all its Covid-19 restrictions for arrivals from overseas.

My advice is to get there sooner rather than later.