‘I fly business class… for free!’ Meet the TikTok user whose viral videos reveal the perks of her dad being a United Airlines captain 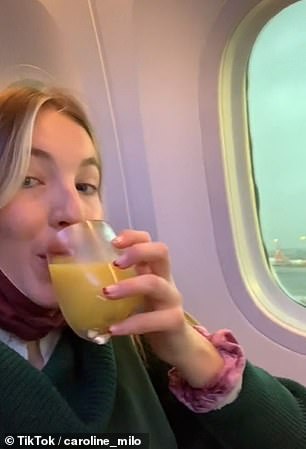 A TikTok user has revealed how she lives the high life – thanks to her dad being a pilot.

Caroline Deborah Milo saw her followers leap from around 100 to 25,000 overnight after she posted footage of a business-class United Airlines flight she enjoyed for free, thanks to a standby ticket she was allocated via her dad’s status as a United captain.

Taken on a flight from Amsterdam to New York, the video, titled ‘day in my life as a pilot’s daughter’, shows the 24-year-old saying hello to her father, Michael Milo, in the cockpit before take-off and then turning the camera on her Polaris business-class seat, complete with a fancy amenity kit, complimentary slippers and premium inflight meal.

Caroline, who is Ohio-born but currently based in New York, says the reaction to the video was ‘insane’, with the clip receiving 1.6million likes, more than 4,000 comments and over 5,000 shares. 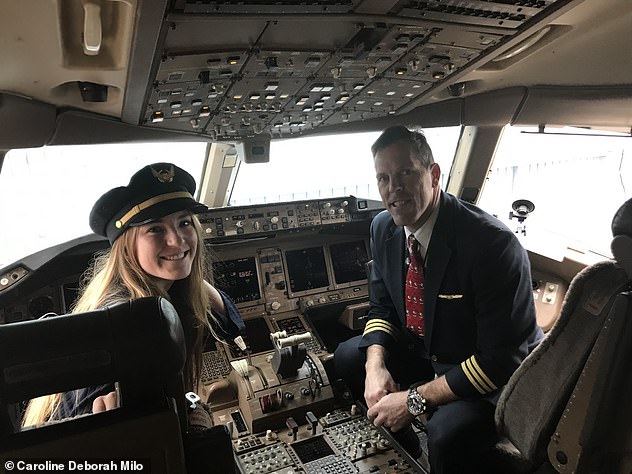 Caroline and her dad, United Airlines pilot Michael Milo, in the cockpit before a flight back to the U.S from Frankfurt, Germany. He was promoted to captain after this picture was taken, which shows him with senior officer uniform stripes

She has since shot many more ‘pilot’s daughter’ TikTok videos, leading her follower count to soar to 55,000.

‘There are many perks of being a pilot’s daughter, one obviously being that my family and I get a lot more flexibility to travel to places on a whim together,’ Caroline tells MailOnline Travel.

Breaking down how the standby ticket process for airline employees and their family members works, Caroline explains that you join a ‘sort of a waiting list’ to get on a flight, and your seniority in relation to the company ‘determines how high up you are on the list’.

Caroline notes that her dad tends to be high on the list as he has been working for United Airlines for over 27 years, whereas she is often ranked lower down as the daughter of an employee. In general, crewmembers are given priority because ‘many of them commute to the airport they’re based out of’. 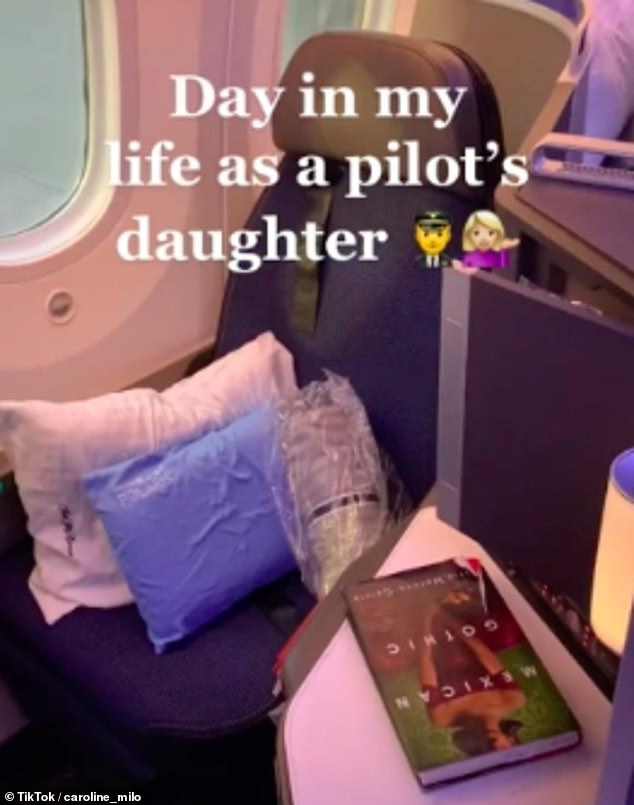 Caroline saw her followers leap from around 100 to 25,000 overnight after she posted footage of a business-class flight she enjoyed for free, thanks to a standby ticket she was allocated via her dad’s status as a United Airlines pilot 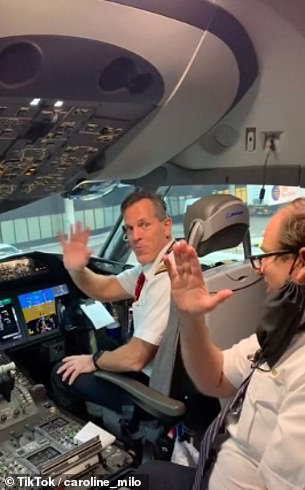 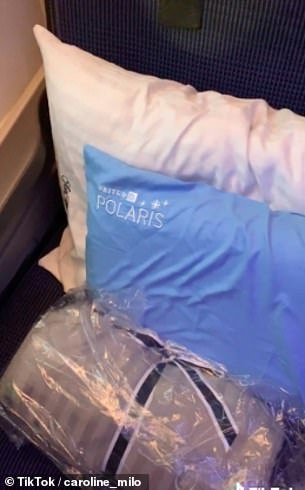 Taken on a flight from Amsterdam to New York, the viral video shows Caroline saying hello to her father (left) in the cockpit before take-off (before he was promoted to captain) and then turning the camera on her Polaris business-class seat (right) 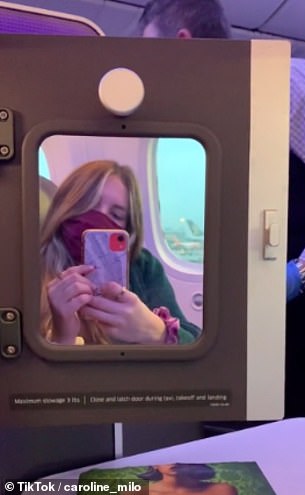 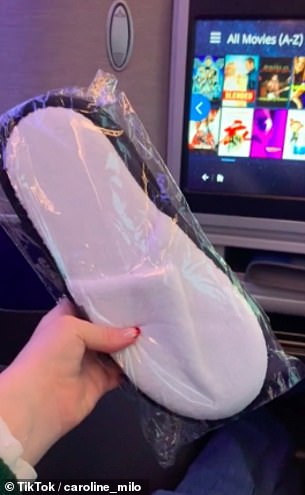 Caroline, who is Ohio-born but currently based in New York, says the reaction to the video was ‘insane’. Pictured right are the complimentary slippers that come with the Polaris seat

While she gets her ticket for free, her dad does pay tax on the ticket through his paycheck. ‘Flying can be very expensive and having the discounts makes it a bit more feasible,’ says Caroline.

Over the years, Caroline, who works as a junior interior designer and project manager for a design firm in New York, has managed to save quite a chunk of money by flying standby – she estimates around $40,000 (£33,227).

While she doesn’t always bag a standby business-class ticket, it does happen ‘a lot more often than you would think’.

‘We call them the “princess seats” in our family because they make you feel like royalty on the United Polaris business-class seats,’ she says, adding: ‘I’d say a little less than half the time I’ve travelled it’s been business, whether that is international or domestic.’ 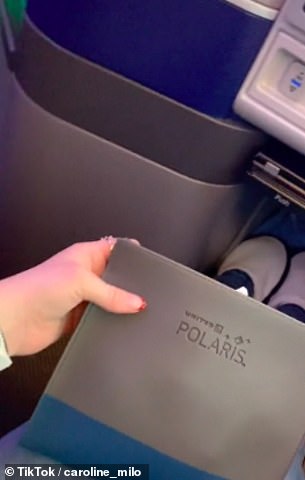 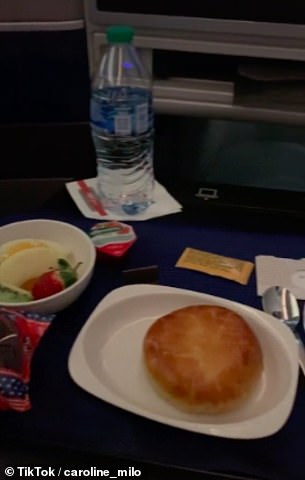 The video looks inside Caroline’s Polaris amenity kit (left) and scans over her inflight meal (right) – a burger, fruit and a muffin 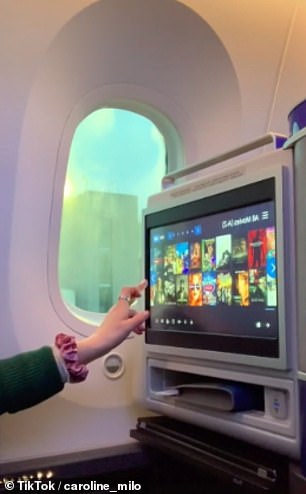 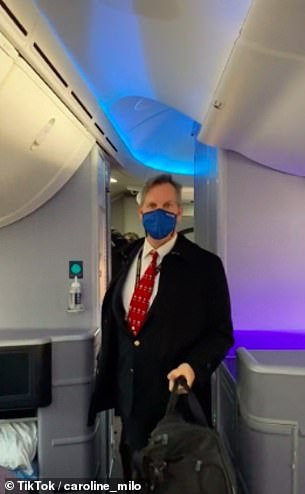 The viral clip received 1.6million likes, more than 4,000 comments and over 5,000 shares. When Caroline is flying with her dad, they often get lunch together at the airport before he ‘goes into operations to check on the vessel, weather, paperwork and whatever is necessary before we go’

Once she has secured her ticket and taken her seat, Caroline finds that the cabin crew often recognise her as an ‘extension of an employee’.

She says: ‘They know I’m the pilot’s daughter and can relax a bit more since I’m not a paying passenger that they want to impress and keep the prestige of the airline and their job. I already love the airline, love the crew, and love the experience.’

There’s another sweet bonus to flying standby. ‘Sometimes [the cabin crew] give me a few extra scoops of ice cream if there are extras at the end,’ Caroline notes.

When she’s flying with her dad, they often get lunch together at the airport before he ‘goes into operations to check on the vessel, weather, paperwork and whatever is necessary before we go’.

She continues: ‘Once boarded, he comes back to greet me and lets me know the cabin crew know who I am, that I’m in good hands, and so as to be on my best behaviour… then once things settle, I typically go up to say “hi” to all pilots and my dad and then sit back down before we take off.’ 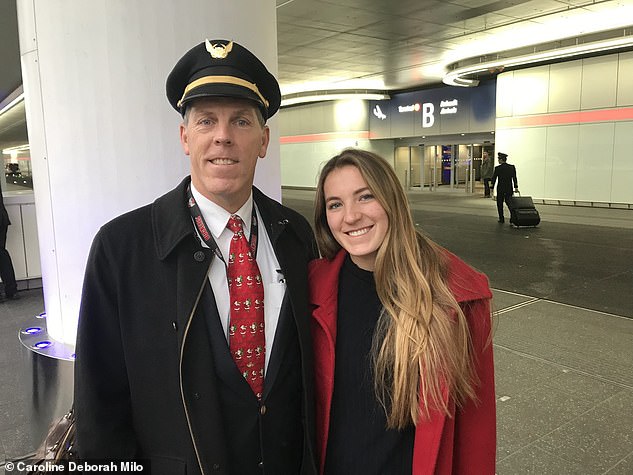 Caroline says of flying with her dad: ‘I’m always respectful of the fact that he’s working and that he needs to make sure the plane is all ready for a timely and safe take-off.’ Above are the pair in Anna Maria, Florida 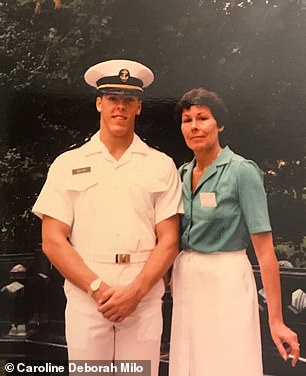 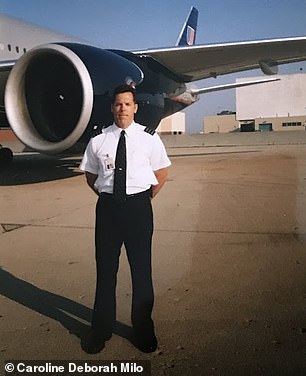 Left is Michael and his mother Beverly as he graduated from the United States Naval Academy. Pictured right is Michael when he first started working for United Airlines

Caroline notes:’ He has to focus but we have fun with it before things get serious. I’m always respectful of the fact that he’s working and that he needs to make sure the plane is all ready for a timely and safe take-off.’

Despite the obvious perks, there are a few downsides. On top of working away for three to four days at a time, Caroline says that her dad ‘often had to work on holidays when most families have a lot of time off and can celebrate it normally’. She says that her family adjusted to it and would postpone their Christmas celebrations until he could join them, making it a special occasion of their own. ‘It’s not the lifestyle for everyone but it works for us,’ she says.

What’s more, if a flight is fully booked and Caroline can’t get a standby ticket, she often needs to rearrange her plans completely. She says: ‘You always need a plan A, plan B and plan C when travelling on standby. Flexibility is key, but being open to the possibilities always helps.’ 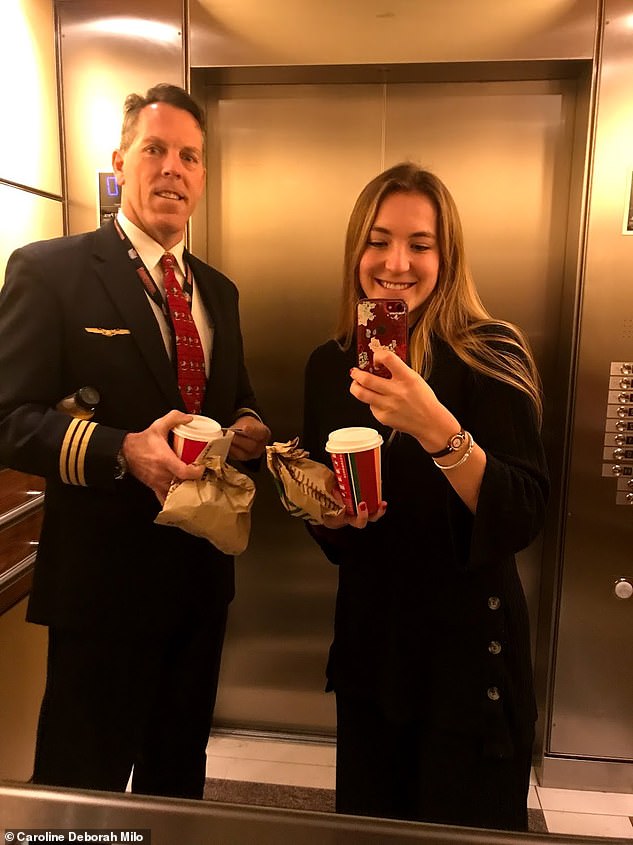 Caroline ‘wanted to be a pilot pretty badly’ when she was younger, just like her father 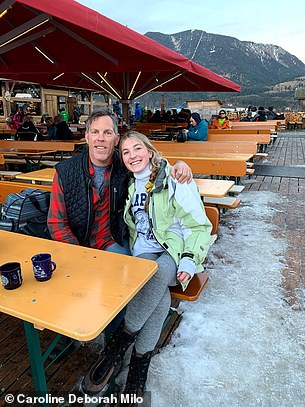 However, Caroline is happy to put up with these drawbacks when she considers the globetrotting lifestyle it has afforded her. She counts Switzerland, Tel Aviv and Beijing among the most amazing destinations she has visited and has plans to explore Bhutan, India and Patagonia in years to come, creating more travel content on TikTok all the while.

With a clear passion for air travel, Caroline ‘wanted to be a pilot pretty badly’ when she was younger and considered training as a pilot with the United States Naval Academy, just as her father did.

However, Caroline’s mum, who is a teacher, and dad ‘were against the idea’, she says.

Explaining why they were reluctant for her to follow in her father’s footsteps, Caroline says: ‘[My dad’s] pilot career has had some very rocky times. Nine-Eleven was terrifying for my family. My dad was working that day… at the time he was based in Chicago flying domestically, had two little kids at home, and in a matter of minutes everything flipped upside down. Things were uncertain, everything changed, and he almost switched careers.

‘Fast forward to the recession in 2008, another huge hit on the airlines. And fast forward to Covid. Well, we all know how [that] affected travel. Things haven’t always been easy.’ 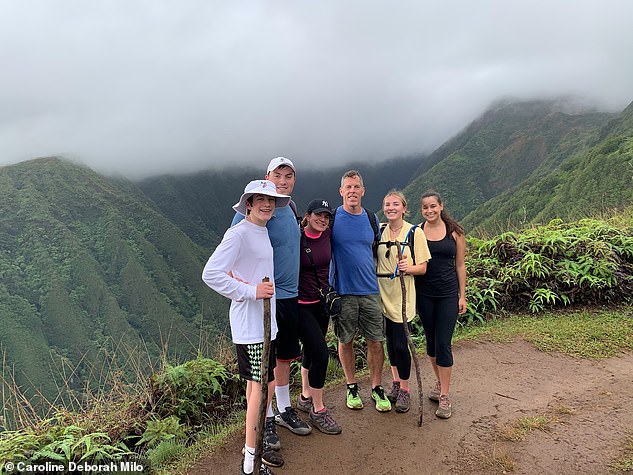 Caroline continues: ‘My parents encouraged all of us to go into something different.’ Her older brother works in private equity for hotels, her younger brother is still in high school, and her own interior design career sees her ‘designing hotels around the world’.

It’s a running joke in their family that they should all open a hotel together, combining their talents. She says: ‘Our family always jokes that my dad will fly us there, my older brother will finance the hotel, I’ll design the hotel, and my mom can teach us all about the language and culture there. It’s quite the squad!’

For more from Caroline, visit her TikTok here – www.tiktok.com/@caroline_milo.