‘A powerful symbol of savagery, cunning and danger’: New book pays homage to the might of the wolf with a stunning collection of photographs

Every pet dog is a wolf in disguise – because all domestic dogs belong to the grey wolf species.

This startling fact is highlighted in a new book called Wolves, by Tom Jackson.

But a perusal of the tome, which contains 150 stunning wolf photographs taken across the world, from Canada to the Himalayas, brings home just how far from the primordial wild form domestic dogs are.

The wolf, the book says, ‘occupies a very special place in our hearts and minds… it remains a powerful symbol of savagery, cunning and danger’.

It adds: ‘No other creature commands the same mix of admiration, fear, loathing and love as this biggest of wild dog species. This book reveals the wolf, an enduring enigma of nature, red in tooth and claw.’

Here, we present a selection of some of the images in the book, with fascinating caption information courtesy of the author. 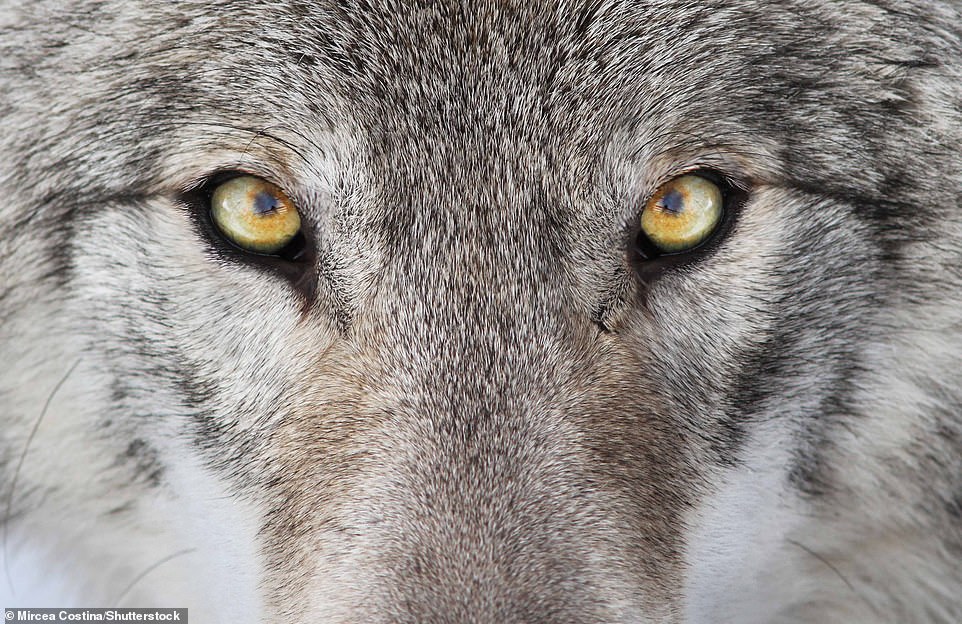 Wolves are born with blue eyes, but these change to a golden yellow after about four months 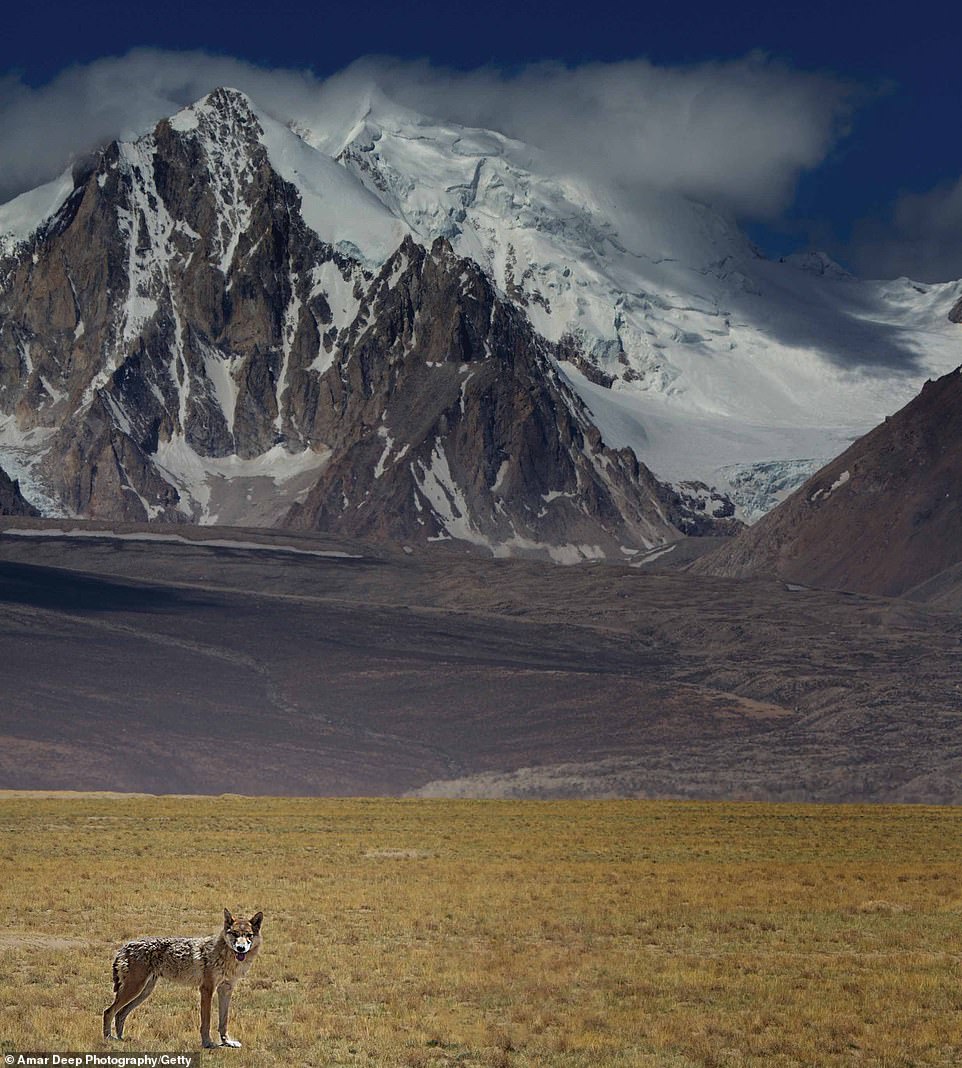 The Tibetan wolf subspecies lives on either side of the Himalayas, spreading through Tibet into the rest of China and extending south into Nepal and India. The Tibetan wolf is characterized by a more pointed snout than other types and has a woolly coat to keep out the biting mountain winds 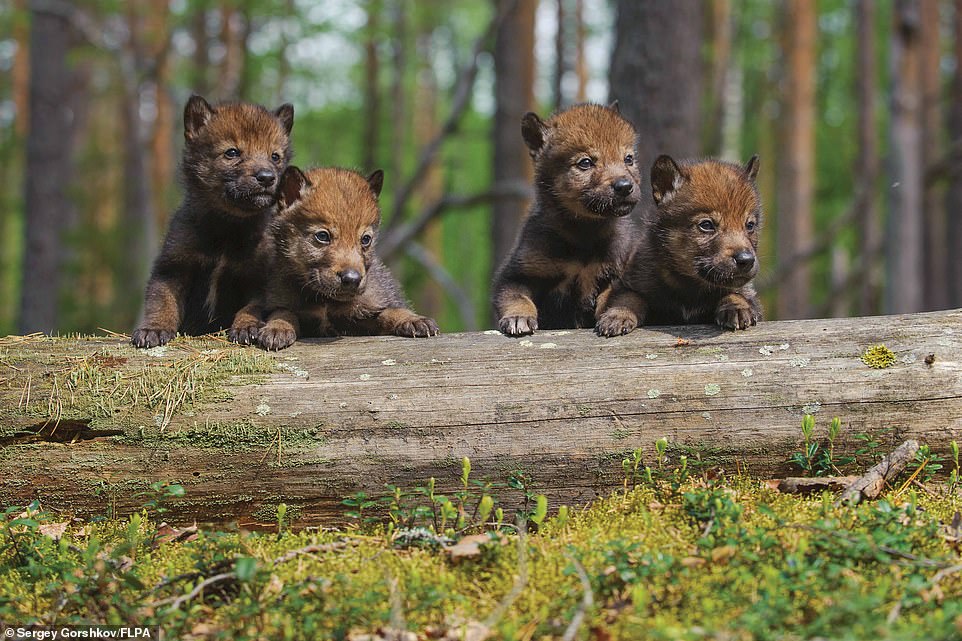 Once all the cubs are strong enough to leave the den, they will move to a life outdoors, joining the rest of the pack. They learn about adult life by watching the grown-up wolves interacting as they come and go on hunting trips 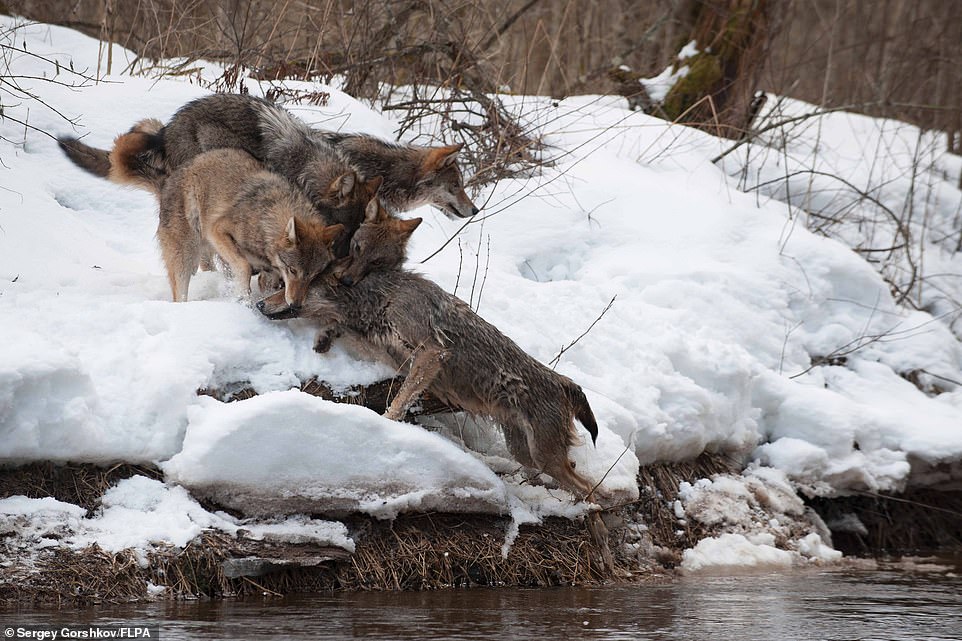 Packmates greet a member who has just rejoined the group by swimming across a river. The new arrival gets some friendly nips on the back of the neck by more dominant dogs as a welcome back into the team 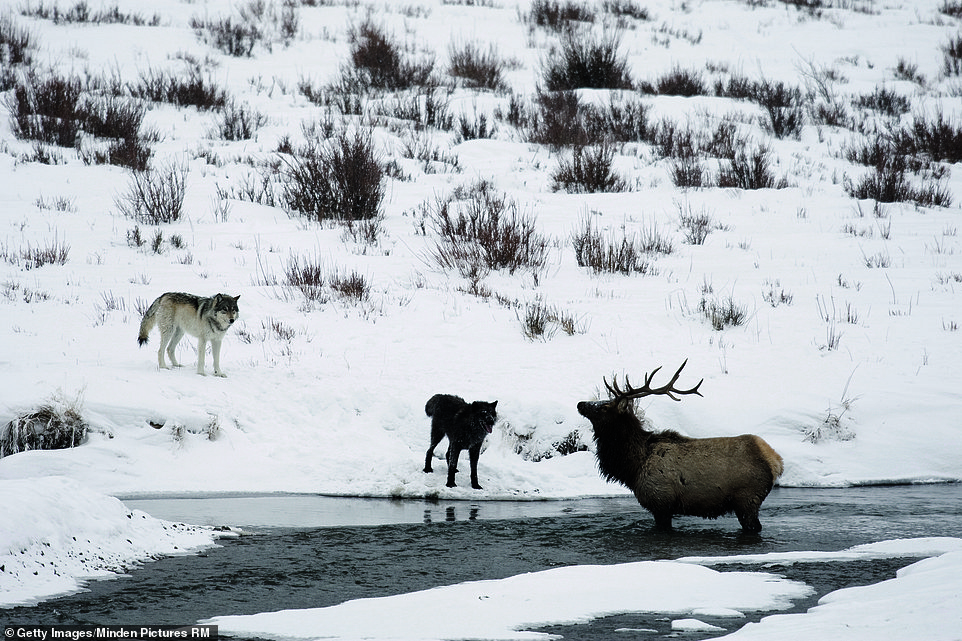 A large elk stag, equipped with a formidable set of spiked antlers, eyes a pair of wolves. The pack has forced the deer to the bottom of a valley, far from the relative safety of the trees further up the hill. Now the wolves block the deer’s path to safety while other wolves make their way around behind and go in for the kill 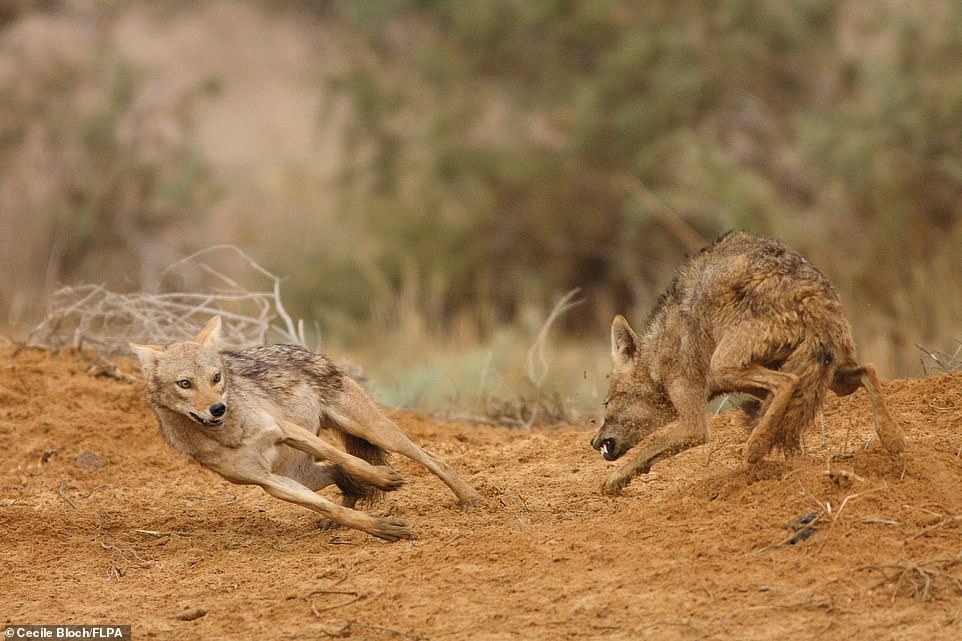 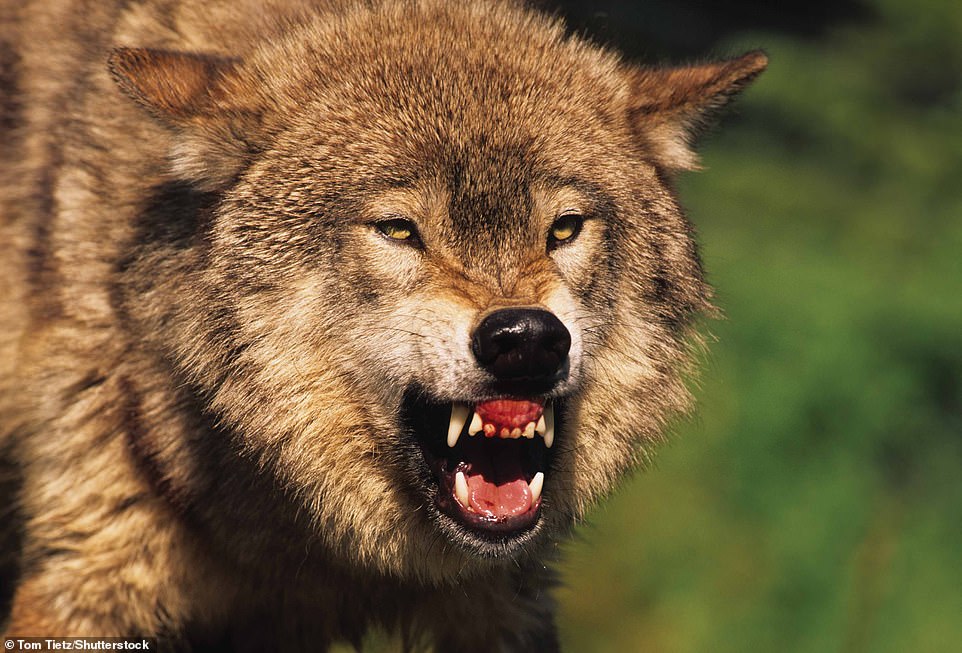 When prepared for a fight, the mane wolf shows off how it won its name. A strip of dark hair that runs from the back of the head to the shoulders stands erect when the wolf detects a threat. Unlike the wolves of the north, the maned wolf is primarily solitary in nature and has to contend with more powerful predators, such as pumas and jaguars 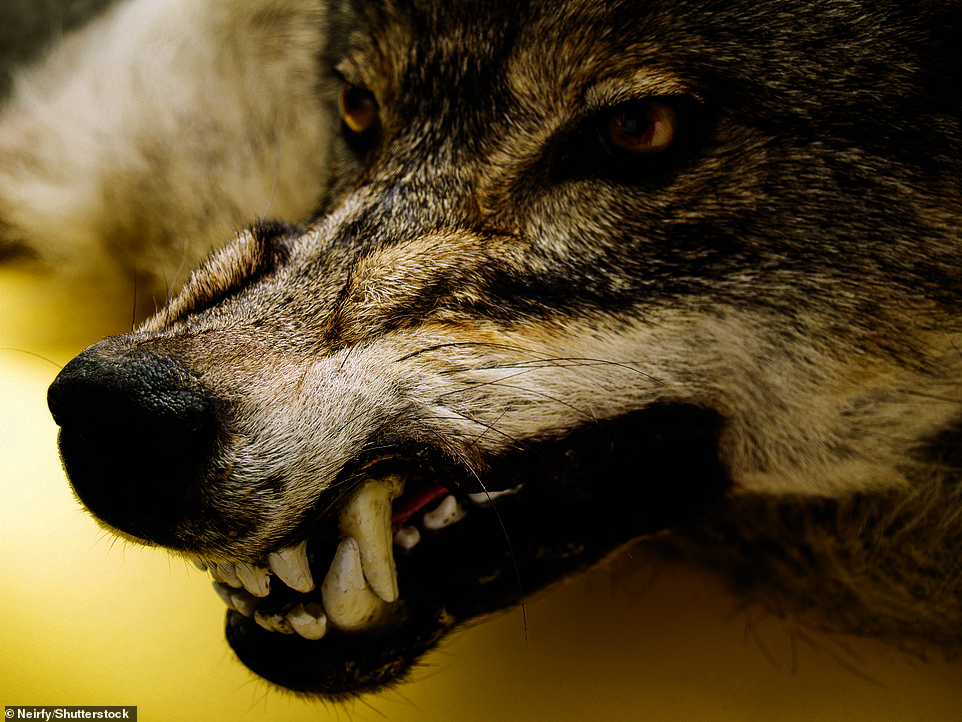 The wolf and the rest of the dogs and foxes belong to the family of mammals known as the Canidae and are often collectively described by the adjective ‘canine’. The wolf, for example, is the biggest canine species. The terms Canidae, canid and canine all derive from ‘canis’, the Latin word for dog. This wolf is showing off its long fangs, better described as its canine teeth. The name of this type of tooth was inspired by the wolf and its allies, but it is used to describe the dental make-up of any mammal with these fang-like teeth. Cats, bears and other meat eaters have canines, as do humans, but rodents and herbivores, such as sheep, do not 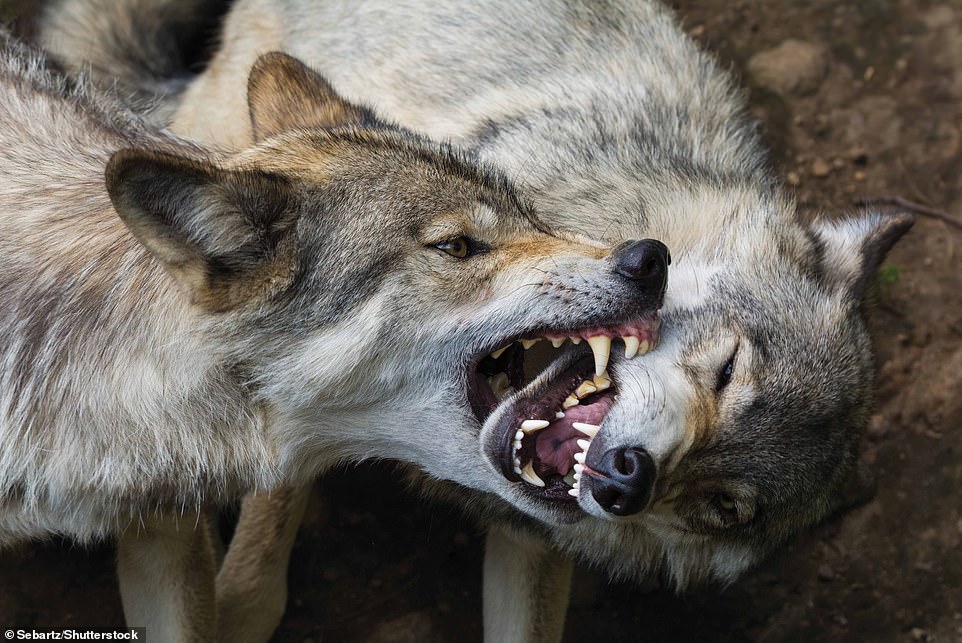 The alpha female is superior to all other members of the pack except the alpha male, who tends to be larger and stronger 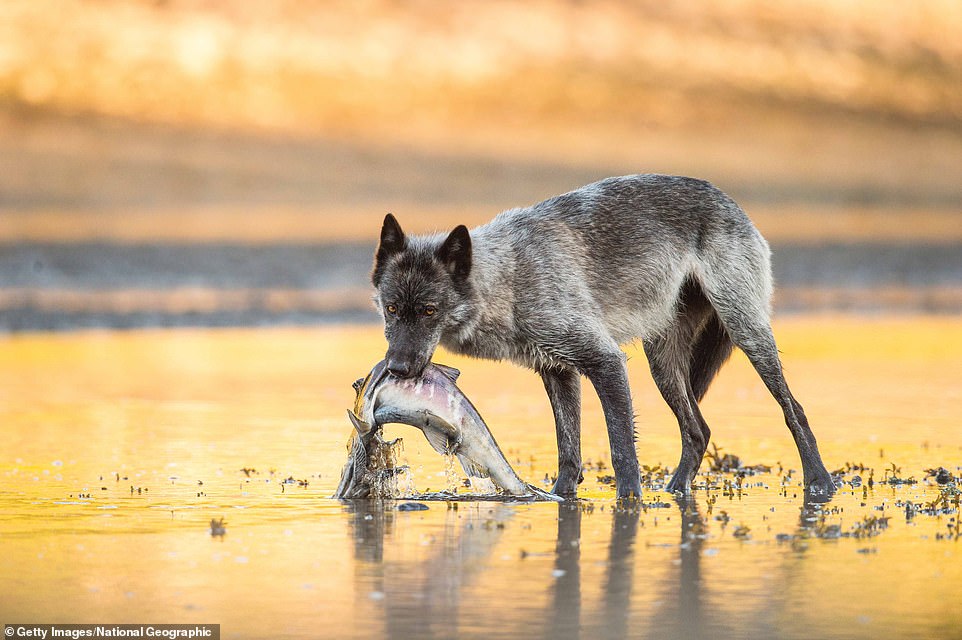 Salmon are a valuable source of food for the packs in the Coast Range mountains of western Canada. In autumn, many thousands of dead fish pile up in shallow streams 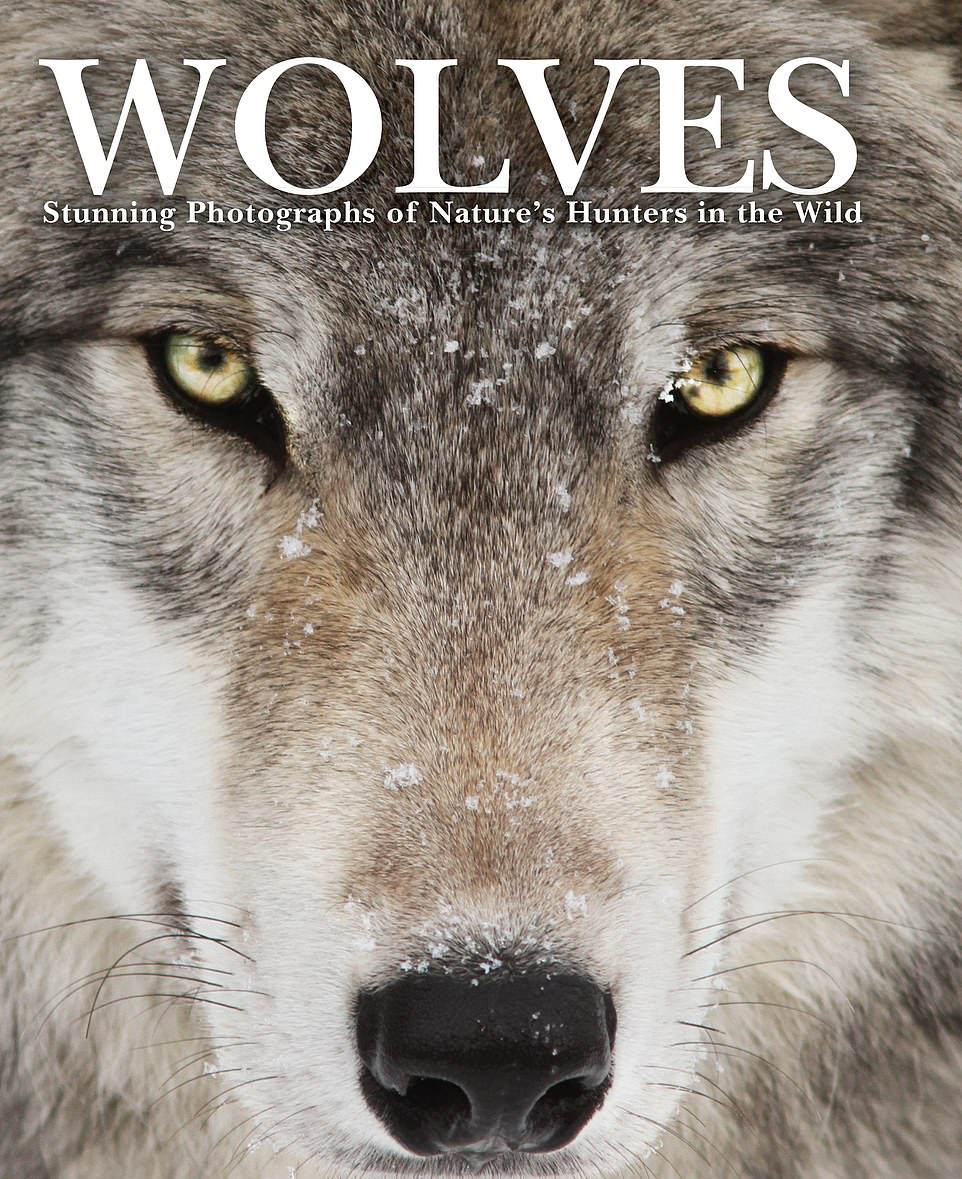 Wolves, by Tom Jackson, reveals this ‘enduring enigma of nature, red in tooth and claw’