Passengers were forced to evacuate a Delta Air Lines plane after smoke started filling the cabin.

The Boeing 767 had been on the tarmac at Madrid Barajas International yesterday, bound for John F. Kennedy International Airport in New York, when the smoke was detected.

The captain made the decision to order all of the passengers off the aircraft to investigate where it was coming from. 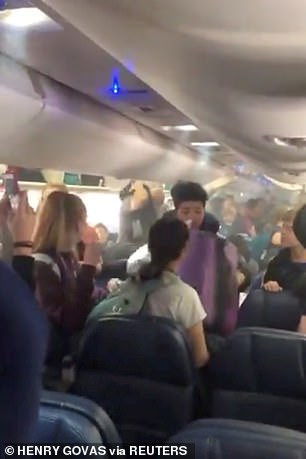 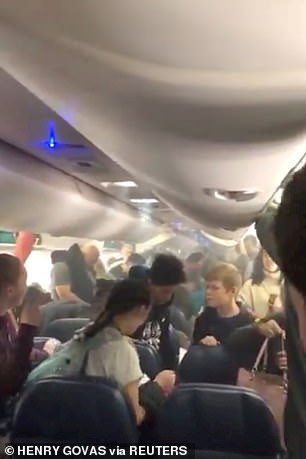 Passengers make their way to the exits on a Delta Air Lines plane after smoke starts filling the cabin. One passenger took to Twitter to describe how the smoke caused him to cough

One passenger on the flight, called Pax, took to Twitter to describe how there was smoke everywhere, causing him to cough.

He tweeted: ‘There was smoke everywhere. They waited to see what it was until they let us out of the plane. I have not stopped coughing.

‘Don’t understand why they didn’t let us get off the plane right away.

‘I can’t believe they let us breathe all that smoke until finally letting us out.’

Delta maintenance teams then worked to resolve the issue and the flight left after a two-hour delay. 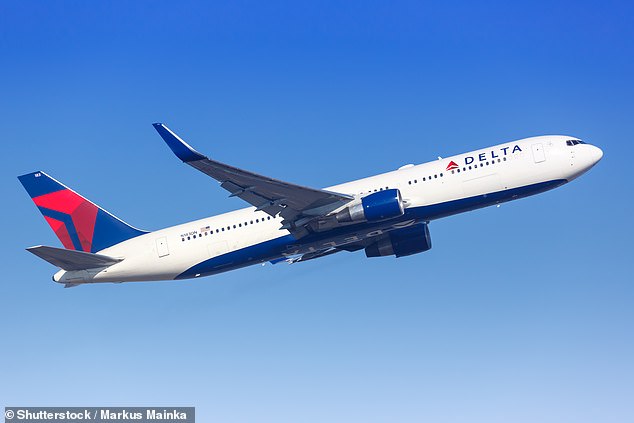 The Boeing 767 had been on the tarmac at Madrid Barajas International, bound for John F. Kennedy International Airport in New York, when the smoke was detected (file picture)

A spokeswoman for Delta Air Lines told MailOnline Travel: ‘Shortly after boarding, the captain of Flight 127 from Madrid to New York-JFK chose to deplane the aircraft due to a smoky odor detected in the cockpit and cabin.

‘Passengers safely exited the aircraft, which was still at the gate.

‘The aircraft was removed from service for inspection and maintenance. Delta apologizes for the inconvenience.’