Travel and travel planning are being disrupted by the worldwide spread of the coronavirus. For the latest updates, read The New York Times’s Covid-19 coverage here.

As passengers trickled into Philadelphia International Airport on a recent weekday morning, LaShanda Palmer, 45, a senior agent with the Transportation Security Administration, stood alongside 40 other colleagues and prepared to review documents, inspect luggage and pat down passengers while fighting back gnawing anxiety over how exposed she was to a threat that could not be seen or felt.

Since the beginning of the pandemic, more than 6,000 employees of the T.S.A. have tested positive for the coronavirus, and 14 of them have died, according to data recorded by the federal agency. Frontline agents describe the situation as a hidden epidemic fueled by lax safety measures on the part of the T.S.A.

At a time when Americans are being urged to limit their contact with others and maintain at least six feet of distance from people they do encounter, T.S.A. agents must screen hundreds, if not thousands of people a day, often in close proximity to travelers and their colleagues, and they are required to clean terminal surfaces regularly between shifts.

Agents are required to wear masks, gloves and face shields, but until this month, when the Biden administration mandated that travelers wear masks at airports, on planes and on all federal property, masks had not been mandatory for all air travelers in the United States. Instead, local airport authorities set their own rules, which varied widely. 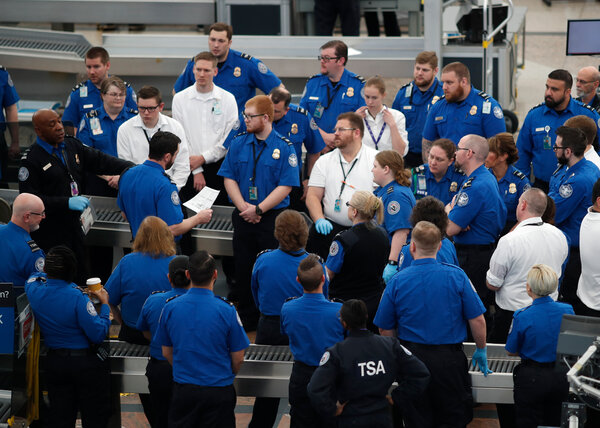 In the early days of the pandemic, many screening agents said they were not provided with personal protective equipment, or P.P.E., including masks and face shields, and were required to work in overcrowded check points where it was not possible to practice social distancing measures. Even when P.P.E. became available, agents did not have to wear the equipment if their airport did not require it.

“In March we had heard about the virus, we knew it was coming, but it was pretty much business as usual. We weren’t wearing masks or taking any other precautions,” said Ro Del Valle, a 37-year-old T.S.A. agent at Newark Airport, who contracted the virus in mid-March.

In her role as an acting supervisor, she said she sat in a baggage room at Newark airport the week before she showed symptoms, as dozens of T.S.A. agents punched in and out throughout the day.

Just weeks into the pandemic, Ms. Palmer, the Philadelphia agent, developed coronavirus symptoms including a cough, shortness of breath, severe back pain and a high fever, which prompted her doctor to tell her to go to a hospital.

“Too many people were dying in the hospitals, so I refused.” Ms. Palmer recalled. “But then my symptoms got so bad at home that I thought I was going to die there,” she said, though she stayed at home. “I couldn’t breathe, my heart was racing and I was too scared to go to sleep because I thought I wouldn’t wake up.”

She was just one of 120 T.S.A. employees at the Philadelphia airport to fall ill, with the most recent case among a screening officer diagnosed on Jan. 27.

Not surprisingly, the nation’s busiest airports, with their millions of travelers, have seen the most cases: 423 at Los Angeles International; 213 at Dallas-Fort Worth; 239 at Chicago O’Hare. But few airports have been spared entirely. The Nome, Alaska, airport, which services only about 65,000 travelers annually had a T.S.A. employee fall ill. Muskegon County Airport, in Michigan, had two.

The T.S.A. leadership says it has taken “extraordinary measures” to enhance the health and safety of its work force and passengers, including a requirement for agents to wear gloves, masks and eye protection if they are not behind an acrylic barrier. Unlike airline employees, T.S.A. agents are not tested regularly for the virus.

The agency says it conducts contact tracing for infected employees and ensures identification of others who may have been exposed and need to quarantine. The T.S.A. also says that employees are getting infected outside of work, not at the airports. “Based on the narrative inputs from infected employees, a clear majority of T.S.A. officers who have contracted the virus were exposed outside of work,” Carter Langston, a spokesman for the agency said in an email.

Bobby Orozco Jr., a regional vice president of the American Federation of Government Employees, or AFGE, the largest labor union for federal workers, cast doubt on that idea. “The fact that they are saying most employees caught the virus outside of the work cannot be proved,” he said.

Instead, he said, the agency is trying to convince officers that they did not get infected at the airport. “In my opinion this is very close to coercion and there is really no way to truly know whether you contracted the virus at work or at home,” Mr. Orozco added.

Initially, when travel plummeted by more than 90 percent in March, frontline agents were relieved because management reduced their shifts, allowing them to maintain a safer distance from their colleagues when they did go into work. However, in anticipation of more people traveling over the July 4 holiday, full staffing was restored and remained in most airports across the country, despite passenger numbers remaining low. There are about 50,000 T.S.A. officers, which includes passenger screeners, those who examine baggage and employees who have desk jobs.

The U.S. government screened 500 million fewer people at U.S. airport checkpoints in 2020, down by 61 percent compared to 2019 figures, according to T.S.A. figures. There has been gradual growth in the number of passengers screened, with the number now running at about 700,000 daily, and spikes around the Thanksgiving and Christmas holidays.

One of the biggest issues, agents say, was the lack of a universal requirement that passengers wear masks. Individual airports were allowed to make their own rules, with some operating for months without a mask requirement.

In Philadelphia, airport authorities did not require them until October. “You’d be surprised how many people refused to wear masks at this airport before it became a requirement,” said Ms. Palmer who serves as the executive vice president of A.F.G.E. Local 333, which represents Philadelphia T.S.A. workers. “And even then, so many people did not wear them properly or they used those thin fashionable fabric masks with gaps around the sides.”

And while she and other T.S.A. employees welcomed the Biden mask requirement, the fact that it came almost 10 months into the pandemic was disappointing. “This virus has been raging, killing thousands of people for a year now and we’re only just making passengers put on masks,” said Ms. Palmer.

The agents say they are also over-staffed for the current volume of passengers. “The number of passengers hasn’t increased enough to justify having a full work force at the airport,” said Joe Shuker, the president of AFGE Local 333, Ms. Palmer’s union. “We have overcrowded check points full of agents, with very few passengers. The numbers pose a safety hazard, but leadership is not listening. They are saying this is taxpayer money that needs to be utilized.”

Let Us Help You Better Understand the Coronavirus