We meet Adams Maihota outside his house in the dead of night. A crab hunter, he wears white plastic sandals, board shorts, a tank top and a cummerbund to hold lengths of twine. He picks a sprig of wild mint and tucks it behind his ear for good luck.

The photographer Eric Guth and I follow Mr. Maihota’s blazing headlamp into the forest in search of coconut crabs, known locally as kaveu. They are the largest land invertebrate in the world, and, boiled or stir-fried with coconut milk, they are delicious. Since the cessation of phosphate mining here in 1966, they have become one of Makatea’s largest exports. 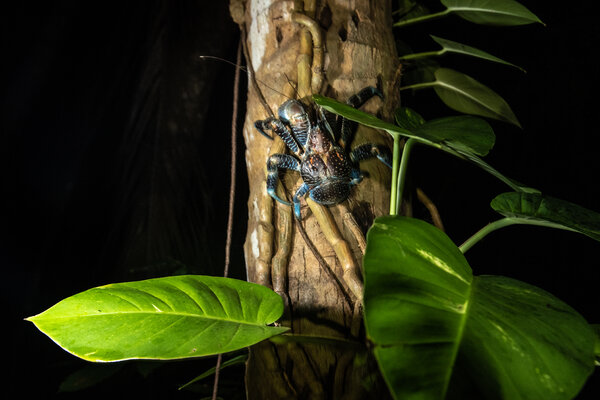 It’s ankle-breaking terrain. We negotiate the roots of pandanus trees and never-ending feo, a Polynesian term for the old reef rocks that stick up everywhere. Vegetation slaps our faces and legs, and our skin becomes slick with sweat.

The traps, which Mr. Maihota laid earlier that week, consist of notched coconuts tied to trees with fibers from their own husks. When we reach one, we turn off our lights to approach quietly. Then, Mr. Maihota pounces.

A moment later, he stands up with a sky-blue crab pedaling its ten legs in broad circles. Even with its fleshy abdomen curled under the rest of its body, the animal is much longer than the hunter’s hand.

Makatea, part of the Tuamotu Archipelago in French Polynesia, sits in the South Pacific about 150 miles northeast of Tahiti. It’s a small uplifted coral atoll, barely four and a half miles across at its widest point, with steep limestone cliffs that rise as high as 250 feet straight out of the sea.

From 1908 until 1966, Makatea was home to the largest industrial project in French Polynesia: Eleven million tons of phosphate-rich sand were dug out and exported for agriculture, pharmaceuticals and munitions. When the mining ceased, the population fell from around 3,000 to less than 100. Today, there are about 80 full-time residents. Most of them live in the central part of the island, close to the ruins of the old mining town, which is now rotting into the jungle.

One-third of Makatea consists of a maze of more than a million deep, circular holes, known as the extraction zone — a legacy of the mining operations. Crossing into that area, especially at night, when coconut crabs are active, can be deadly. Many of the holes are over 100 feet deep, and the rock ledges between them are narrow. Still, some hunters do it anyway, intent on reaching the rich crab habitat on the other side.

One evening before sunset, a hunter named Teiki Ah-scha meets us in a notoriously dangerous area called Le Bureau, so named for the mining buildings that used to be there. Wearing flip-flops, Mr. Ah-scha trots around the holes and balances on their edges. When he goes hunting across the extraction zone, he comes home in the dark with a sack full of crabs on his back.

Mr. Maihota, too, used to hunt this way — and he tells me that he misses it. But ever since his wife fell into a shallow hole a few months before our visit in 2019, she has forbidden him to cross the extraction zone. Instead, he sets traps around the village.

Coconut crabs inhabit a broad range, from the Seychelles in the Indian Ocean to the Pitcairn Islands in the southern Pacific Ocean. They were part of local diets long before the mining era. The largest specimens, “les monstres,” can be the length of your arm and live for a century.

There hasn’t been a population study on Makatea, so the crab’s conservation status is unclear — though at night, rattling across the rocks, they seem to be everywhere.

When we catch crabs that aren’t legal — either females or those less than six centimeters across the carapace — Mr. Maihota lets them go.

If the islanders are not careful, he says, the crabs might not be around for future generations. In many places across the Indo-Pacific, the animals have been hunted to the point of extirpation, or local extinction.

Makatea is at a crossroads. Half a century after the first mining era, there is a pending proposal for more phosphate extraction. Though the island’s mayor and other supporters cite the economic benefits of work and revenue, opponents say that new industrial activity would destroy the island, including its fledgling tourism industry.

“We cannot make her suffer again,” one woman tells me, invoking the island as a living being.

Still, it’s hard to make a living here. “There is no work,” Mr. Maihota says, as we stand under the stars and drip sweat onto the forest floor. He doesn’t want to talk about the mine. The previous month, he shipped out 70 coconut crabs for $10 each to his buyers in Tahiti.

In popular hunting spots, hunters say the crabs are smaller or fewer, but hunters rely on the income and nobody has the full picture of how the population is doing overall.

We visit Mr. Maihota’s garden the next morning where the crabs are sequestered in individual boxes to keep them from attacking each other. He’ll feed them coconut and water to purge their systems, since, in the wild, they eat all manner of food, including carrion.

By daylight, their shells are rainbows of purple, white, orange, along with many shades of blue. For now at least — without mining, and while harvests are still sustainable — they seem perfectly adapted to Makatea, holes and all.

Eric Guth is a documentary photographer based in the Pacific Northwest. You can follow his work on Instagram.