The best and worst airlines for UK delays revealed: Vueling is the least punctual carrier, followed by Thomas Cook, and Cathay Pacific is No1 for on-time departures

Vueling Airlines has the worst punctuality of major airlines flying from UK airports, an investigation has found.

The Spanish carrier’s UK departures were 31 minutes late on average in 2018, according to analysis of Civil Aviation Authority (CAA) data by the PA news agency. 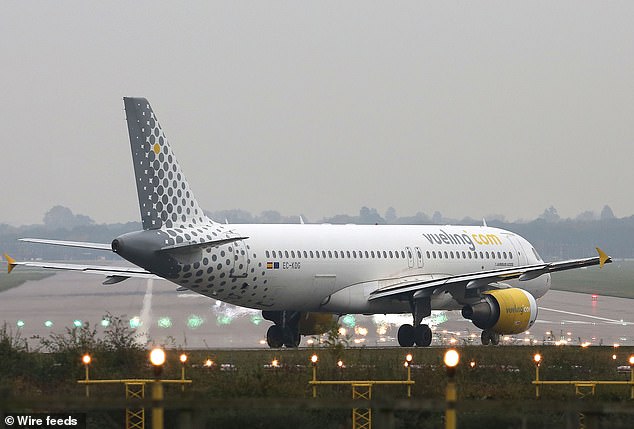 Vueling Airlines has the worst punctuality of major airlines flying from UK airports, according to a new investigation

AVERAGE DELAYS FOR AIRLINES OPERATING IN THE UK

Airline names are as per the CAA website. There are several entries for some companies such as easyJet and Norwegian due to them having subsidiaries.

Cathay Pacific Airways is the most punctual airline, with aircraft typically taking off just eight minutes behind schedule.

The average delay across all flights with every airline was 16 minutes.

The ranking features the 43 airlines with more than 2,000 flights from UK airports last year.

Average delay figures take into account every flight that operated, including those that were on time. Cancelled services are excluded from the CAA data. 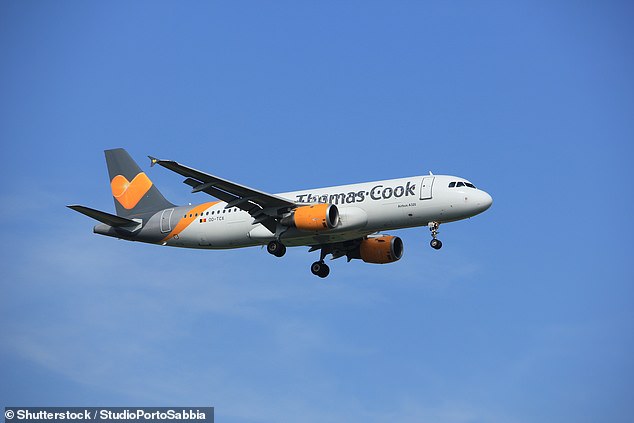 A spokesman for Vueling, which serves several UK airports including Heathrow, Gatwick, Edinburgh and Birmingham, said the low-cost airline’s punctuality was ‘hugely affected’ by industrial action in France.

He went on: ‘There were 22 strike days at Marseille last summer.

‘During these strikes, Vueling flights to and from Barcelona and the UK could not fly straight across France but instead flew south of the Pyrenees and into the Atlantic before looping back towards Britain.

‘All airlines have been affected by air traffic control issues in Europe, but the location of Vueling’s (Barcelona) hub close to Marseille means it has been particularly badly affected.’

He added that the airline has taken measures to mitigate against the impact of further ATC issues, such as allocating up to 10 spare aircraft to operate flights during disruption. 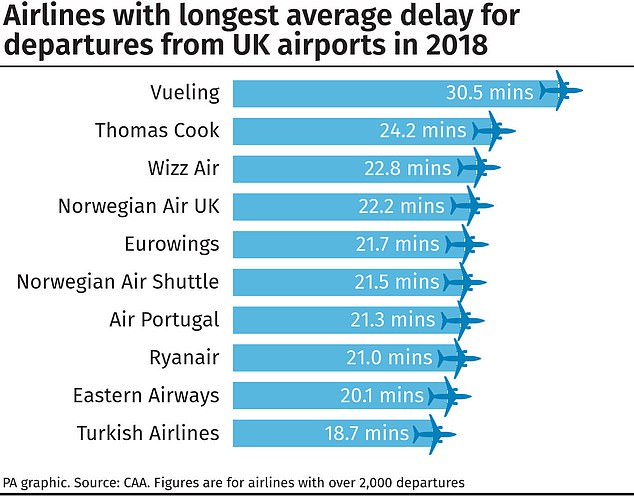 Other airlines that fair badly when it comes to flight delays include Wizz Air, Norwegian Air UK and Eurowings

He added: ‘We support the Government in its efforts to introduce much-needed modernisation so we can continue to safely and effectively accommodate the ever-rising demand for air travel.’

Whereas many train companies pay compensation for delays of more than 15 minutes, airline passengers are only entitled to a pay-out under European Union rules if they arrive at their destination more than three hours late.

Carriers can also avoid paying out if the disruption was due to ‘extraordinary circumstances’ such as severe weather or a security alert.

Naomi Leach, from consumer group Which? Travel, said flight delays can leave holidaymakers ‘hundreds of pounds out of pocket because of missed connections, transfers and fines for picking up their hire car late’.

She added: ‘The worst airlines need to ensure they have the staff and capacity to run an on-time service – and that they look after their customers if delays do occur.’

A Thomas Cook Airlines spokeswoman said: ‘A variety of factors, including air traffic control strikes in Europe and periods of severe weather, contributed to record levels of disruption across the industry in 2018.

‘Unlike many airlines, we almost never cancel flights because we want get our customers away on holiday, so these factors had a particular impact on our punctuality figures.

‘We had a significant period of growth in 2018 with new routes and slots at UK airports. Our customers are our first priority when a flight is delayed and we always want to get them on holiday on time. We have taken steps to improve punctuality this year, including operating more reserve aircraft to help get flights back on time quickly if delays happen.’