We’re off to the Lake District … in Argentina: Swapping hills and mint cake for a volcano and perfect steaks

The recently ousted president of Argentina, Mauricio Macri, is likely to be heading to his favourite spot in the Lake District to lick his political wounds. But his visit will not involve fell walking, munching on Kendal Mint Cake, or even dodging rain showers.

He spends his holidays in the Argentine Lake District in northern Patagonia, a two-hour flight south-west of the capital Buenos Aires. While the area is well known to his fellow countrymen, it’s less so to international visitors. But with its stunning scenery of iridescent lakes, soaring mountains and thick forests, not to mention an increasingly generous exchange rate, this will inevitably change. Queen Maxima of the Netherlands is a big fan of the region too, but then she was born in Argentina, so she may be a little biased.

Visitors fly into San Carlos de Bariloche, a winter gateway for some of the best skiing in South America. But in January, the height of the southern summer when temperatures are regularly up into the 80s, people come to hike, bike and fly-fish. 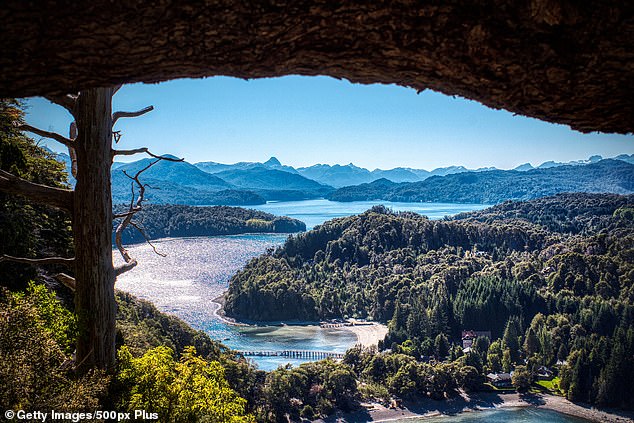 Stunning scenery: The crystal-clear waters around the upmarket holiday resort of Villa La Angostura in the Patagonia region

Pick up a hire car and drive north for 90 minutes on Ruta 40 – Argentina’s answer to Route 66 – which runs for more than 3,100 miles from the desolate pampas of Patagonia to the border with Bolivia.

The upmarket holiday town of Villa La Angostura makes a great base. Shrouded by woods and bordered by Lake Nahuel Huapi, with angular, wooden houses away from its main street, it wouldn’t look out of place in the Swiss Alps.

This is the southern starting point for the Ruta de los Siete Lagos, or Road of the Seven Lakes, a stunning 62-mile drive to San Martin de los Andes. It takes a lot longer to complete this route than you might imagine due to the numerous diversions for photo stops of the rippling hills and mountains of the Andes that provide the border with Chile.

Want to take your hire car into the neighbouring country? It’s possible if you confirm this at pick-up. Expect to pay a surcharge of about £30.

But who wants to be stuck behind a wheel the whole time? Like the wide open spaces of New Zealand or the Canadian Rockies, the point of being here is to get back to nature: to step out, fill your lungs and enjoy the great outdoors under skies that seem to go on for ever.

There are plenty of biking and hiking routes here, and one of the most scenic follows an hour-long boat ride from Villa La Angostura, put-put-putting along at a gentle pace and feeling the wind in your hair up on deck.

Disembark at the Arrayanes national park for a gentle seven-mile walk back along the Quetrihue peninsula. It is said that the forest in the cartoon Bambi was based on this area after a visit by Walt Disney himself. 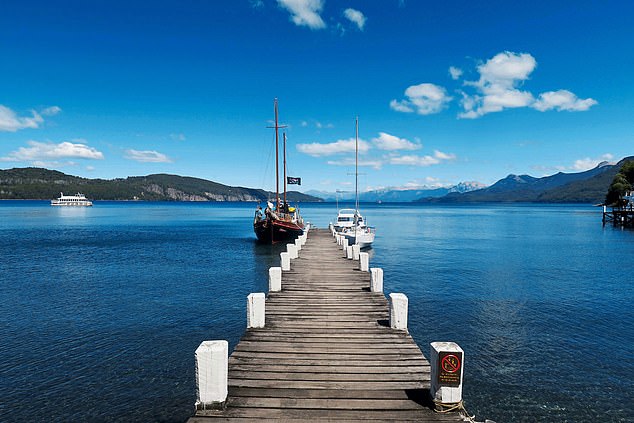 Stunning: Pictured are boats on the beautiful Lake Nahuel Huapi

You’ll share the well-maintained path with just a few others and although the trail isn’t that undulating, you can stop regularly for water, chocolate, photos or just to listen to birdsong and soak it all in. There’s a thick canopy of beech trees here, as well as colourful fuchsias, outcrops of bamboo and blankets of Chilean myrtle.

Hike from the town itself to look out over Lake Correntoso and to a 165ft-high waterfall, Cascada Inacayal. On another day you could drive for about 30 minutes to Lake Espejo Chico, turn off down a bumpy dirt track to a secret beach (actually it’s signposted but not many people follow it), then enjoy a picnic of sandwiches bought in town and Quilmes beers that you can keep cool in the water.

There’s a certain fragility to the landscape here that’s hard to put your finger on, until you realise that about 25 miles due west lies the 7,335ft volcano Puyehue-Cordon Caulle, which last erupted 18 years ago, blanketing Villa La Angostura in a thick covering of ash. Luckily, she was silent on our visit.

Villa La Angostura is a pleasant town with a frontier feeling and the happiest, most tail-waggy packs of stray dogs you’ll come across. 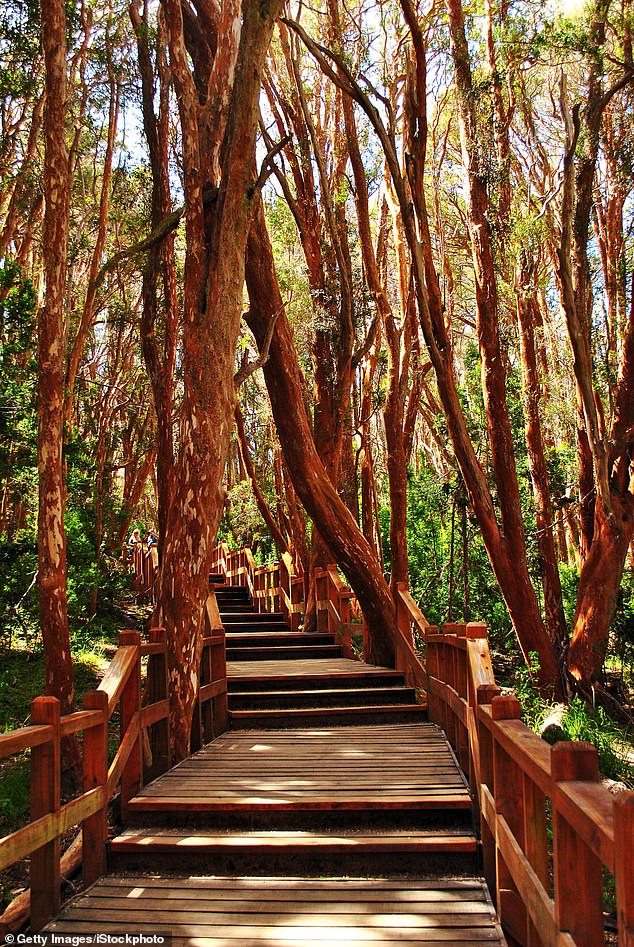 Bambi’s forest: The woods that inspired the Disney classic after Walt Disney paid a visit

With the pound currently worth about 70 pesos, eating out is a steal and petrol is the equivalent of 60p a litre.

A year ago, the exchange rate was around 45 pesos, and even then things were a bargain.

Argentina is known for some of the most succulent steaks on the planet, and a meal of bife de chorizo or lomo (sirloin or fillet), plus some delicious pasty-like empanadas and an excellent bottle of malbec, will set you back about £35 for two.

On the main street, there are plenty of coffee shops, restaurants and bars. For souvenirs, take home sturdy leather belts, alfajores (biscuits) and jars of dulce de leche (caramel sauce), which Argentinians love almost as much as maté, a kind of bitter tea. They consume maté from a gourd with a metal straw, and constantly top up with flasks of hot water.

While this particular Lake District might be lacking in Beatrix Potter tea towels and gingerbread, it does certainly hold its own on another front. Almost half the immigrants to Argentina came from Italy, so gelato here is on a par with anything you’ll find in Venice or Rome, especially if you’re a fan of rich, unctuous chocolate flavours.

Will Hide paid for his own trip but used Last Frontiers, which offers a ten-day holiday in Argentina, including three nights in Villa La Angostura with a hire car, from £2,488 per person, based on two people sharing. The price also includes return flights from Gatwick, domestic flights in Argentina, airport transfers, some excursions and accommodation including breakfast in Buenos Aires, Villa La Angostura and El Calafate.